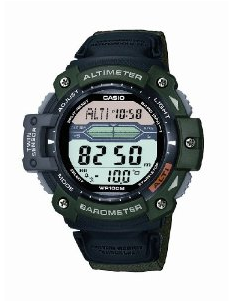 Last year i was walking down from Greendale Gill near Nether Wasdale, testing a pair of neoprene gloves. I found that the cuff of the gloves was quite tight and so i took off my Suunto Vector watch and put it in my pocket.
When i got back to the car the watch had vanished. I walked back so far along the path but no sign of it. I went back the following day and tried to find it but was like looking for a needle in a haystack.
Plenty of people were out walking and i gave them my phone number just in case they came across it but to no avail.
Now you will probably find the next sentence a strange one with me having searched high and low for it. I didn’t particularly like the Suunto watch.

I found the Altimeter and Barometer awkward to set and more times than not i didn’t bother with it. I found it’s trail logging a nightmare and i never used that much. The alarm was as much use as a chocolate fireguard, the electronic compass cut out before you had really had chance to assess the direction you wanted and the strap broke twice. Apart from that the watch was fine.

Considering the cost of the Suunto Vector, i think it was £150 when i bought it and it’s lack of affection on my part i decided that i wasn’t going to replace it with a new one.
In the meantime i had bought a Satmap Active 10 GPS which gives all that information anyway. So i just bought a Timex expedition watch, not expensive, and if i lost this one it wouldn’t hurt the pocket as much.
And time has passed.

One of the things i really miss in the hills is an altimeter. But you have one on your GPS i can hear you say. Well yes you do, just as long as the GPS is switched on and its not in the depths of your rucksack or as sometimes happens, you left it at home.

So i was checking out altimeters, just altimeters, not watches and i was quite taken back by how expensive they were. These expensive ones were not for me as i have a GPS, did i mention that?

I was about to call it a day when i googled Altimeter watches. Lots were found but again the usual culprits were up there and still far more than i wanted to pay.
Then in the side bar i noticed this Casio watch with a price tag of £39.99. Now that’s more like it, i could loose that i thought.
I did what we all do now and i read a few reviews and as usual some were good and some bad. Some said the Altimeter was completely useless and not to buy it and some said it was accurate. Who do you believe? But overall the points were more positive than not. I decided to take the plunge.

Now i read the instruction book which funnily enough i found easy to understand. That in itself is quite unusual because to this day i still havn’t got my head round the Vector instruction book and picture portfolio.
I read that the 2 sensors for air pressure and hence altitude, were factory set but can vary and instructions were there about how to reset them.
With this type of kit and sensors, expensive or cheap they work in a similar fashion. Barometric pressure changes and so altitude readings change and visa versa. The best method of setting it is on the day of the walk and in the area you are walking, not 100 miles away in the garden before you set off.
Position yourself in a location where you know the spot height and check the reading. Adjust it as required within 5 metres. I have found that it will maintain this all day but it is always worthwhile when at other spot heights, like trig points etc just to have a look and see if it is correct.

Barometric pressure can change very quickly in the UK with our fickle weather and that is probably why some people have given the Casio poor reviews, because they just don’t check and adjust enough to cope with the changes in pressure. If you expect it to read right day in and day out without any  manual adjustment then you are very much mistaken. This will never happen.

On Saturday, the day of my last post, i set my datum height at a known spot of 150 metres high. It actually read 175metres on the watch so i hoped that the barometer had risen since i last set it at home.
I quickly and easily reduced the hight to the 150metres. So much easier than with the old Vector.
When we got to the summit of Swirl how i checked to see what the elevation was and as you can see from the photo below it was 800 metres. 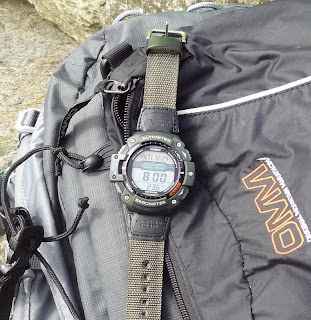 Swirl How is 802metres high. The watch rounds off numbers so it could have gone to either 800 or 805 metres and i would be more than happy with it. If this is not accurate enough then i think peoples expectations of this type of equipment out way its capabilities. It will do me.

The watch also has a temperature reading which just like the Suunto Vector is very much affected by body temperature. So if you require a correct reading the watch has to be removed from the wrist and given time to settle. Again the temperature sensor is easily adjusted if found to be high or low when comparing it to a known accurate source.
The alarm of which there are five individual alarm settings, is far superior to the Suunto Vector but the background light is not as good. Adequate but could be better. It doesn’t have an electronic compass and it doesn’t have the ability to log your walk/ride.

Overall i am more than pleased with it. It performs the basic functions well. It’s not as heavy or bulky as some i have seen. It’s easy to read and adjust. The green bar across the centre of the screen is a weather window it’s arrows pointing to show rising or dropping pressure. (The screen is also scratch proof. (added 22/08/12))

For the price of £39.99 i must say it’s great value for money. It will certainly be accompanying me in future. Well, until i loose it anyway.

Please note that it has only been my intention here to cover the Altimeter/Barometer/temperature parts of the watch function. But it has other functions like stop watch, countdown timer, numerous separate time zone capabilities and more which can be googled if you want to review the whole watch specification.

Looks rather good. Shall I get one? :)

Hi Robin,
I have actually found it a pleasure to check, alter, adjust etc.
I like it much more than the Vector. If you don't like the strap, which i do btw, it can cheaply be changed to numerous other types. Unlike the Vector.
Shall i get one? If you want an altimeter to assist route finding instead of using valuable GPS battery life, at a value for money price, why not.

Very interesting Alan, and a nice compact item that won't cause your gear room to overflow! I use a Suunto Altimax that my colleagues gave me when I left work, and I gave up on the ascent/descent data years ago, but I do find the altimeter both accurate (within reason) and very useful. (I can also hear the alarm, usually!)

I’m trying to burrow into next doors Martin.
When i got my Suunto it was a must have item. Eventually it just became a timepiece. I found everything else apart from the Altimeter was quite awkward, difficult to remember how to set it up or just plain poor. I would presume the Altimax uses the same alarm as the Vector but i don’t know that for sure. You could hardly hear the Vector at all and i have read numerous reviews with the same problem. It might have been a military specification not to wake up the enemy.

I've got a similar watch - a Casio Protrek but TBH I can't just remember the model and number (snappy and memorable as those usually are!).

I don't use the functions much, but when I do, all seems to be quite straightforward and reasonably accurate.

Glad you like yours - and, as you say, good value at that sort of price!

Hi Jules,
I will only use the altimeter. Thats why i didn’t want to pay a lot for it. Having said that there are some retailers on the internet selling this very item for £105. Crazy if people pay this.

i've had an Altimax for about 10 years or so. I've only ever read parts of the manual, only understood parts of what I've read, and only been able to implement parts of what I've thought I've understood. Basically I use the altimeter when I take a breather to check the ascent since I last took a breather (these days it is usually measured in tens rather than hundreds of feet). I sometimes reset it at known spot heights (either summits or sea level).

I do like the accuracy and clear display, although those things are probably available at a cheaper price. I was steered away from other watches with compasses (the Altimax has no compass) as they supposedly had a poor battery life, although I'm guessing technology has moved on over the course of a decade. I've generally found the Altimax to have very good battery life.

If I was buying now I'd almost certainly go for something like the Protrek.

Hi Oss,
So you understand where i am coming from with the Vector. If i had known how bad the compass was on the Vector i would have gone for the Altimax. The compass must use a lot of battery because it goes off before you have chance to use it properly. A waste of time to be honest.
One of the good things about the Casio which i didn't mention is that it has scratch resistant glass. I don't think my Vector did because it was scratched.

To be honest, I wouldn't have known about the battery life issue without the help of the bloke in the shop, who was decent enough to point it out to me, even though that meant selling a less expensive watch.

Owning it has been a bit like computer software in terms of usage - I've learned the bits I use regularly and the other functions remain a mystery to this day.

I like it Alan. There is far too much time spent on really expensive kit when a cheaper alternative either does the job sufficiently well, just as well or even better than the more expensive version. I have a Suunto Vector and the cost never really bothered me and I do like it. However, I like this Casio too following your frank and direct review of it. The compass on the Suunto is a luxury - you'll take a proper compass anyway, and a map, and maybe even a GPS so who needs it? It wear out the battery so I never use it. Sadly, I still have my Vector, so I cannot go and out an buy this Casio, but who knows, things get lost, as you know...

Thanks Maz.
Came upon this one by complete accident. But i’m glad i did. I am sure many budget conscious walkers out there would relish this.
I lose things a lot, especially me marbles! Ha, its a age thing.