The Turner Landscapes fell race is a charity race for the Alzheimer’s society. Last year Sheila and i were marshal on Swirl How and i had not recovered from Shingles. It was a most dreadful day and thought that i might not be able to carry on. The weather on the day was also pretty bad.
This year we were asked if we would like to donate a day to help out again, doing the same marshalling point. Obviously, we said yes or i wouldn’t be typing a post about it.
Now i/we, have heard all the tongue in cheek jokes like “We would have run but couldn’t remember where the start was” etc etc. No more Alzheimer jokes are required thanks.
So to the race.
It starts and finishes in a field adjacent to Turner Hall campsite in the lovely Duddon Valley Cumbria. 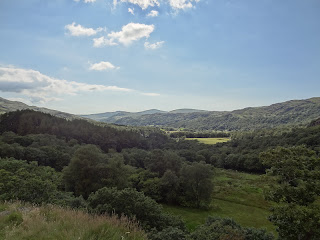 The Duddon valley - view south.
The tops covered by marshals are Grey Friar, Swirl How, Old Man of Coniston, Dow Crag, and White Pike. My unofficial stats for the race are 16.5kl and 850 M of ascent. 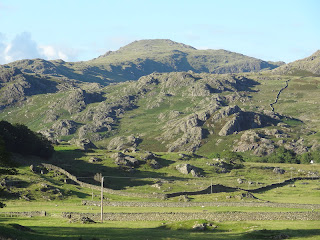 Turner Hall Farm and Grey Friar.
Gathering up our equipment, paper, pens, board, etc and the extremely important radio we set off for Three Shires where, if we are there early enough we can manage to park up. If not then we can end up having a bit of a walk.
We always ascend via Wet Side Edge as this is the shortest and most accessible route. If you need to get a runner off the fell quickly then with the car being relatively close it makes life a bit easier. 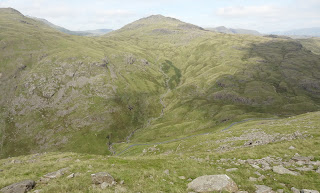 Pike O’Blisco and Wrynose pass.
The route up is quite well defined with cairns along the way. The views you get on a clear day are just spectacular. I particularly enjoy the view of Bowfell  and the Crinkles from here. 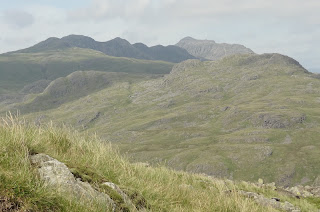 Cold Pike (right foreground). Crinkles in shadow with Bowfell in sun.
We were making speedy progress today, Sheila setting quite a pace. I had to stop a couple of times supposedly to take a photograph but it was just to catch my breath. We caught up and passed a family group with about 5 small terriers we never saw them the rest of the walk so i don’t know which way they went. The edge gives fine views across the district and although it was quite a hazy sort of day the distant fells  as well as those in close proximity could still be made out. So different to when we did the Duddon Fell race in June. 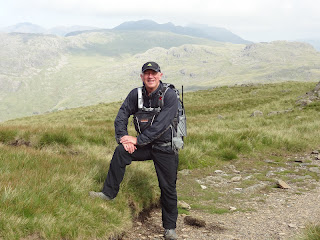 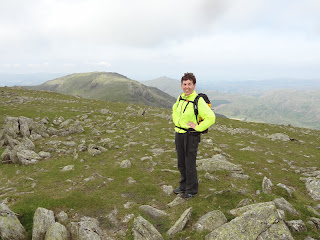 Sheila on Carrs with Grey Friar behind 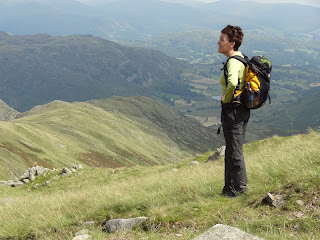 Wet Side Edge with Little Langdale in the valley.
We stopped on Carrs to look at the memorial to the 8 Canadian crew that were killed in the Halifax plane crash here in 1944. They were only a few metres below the ridge line when the fatal accident happened in bad weather. 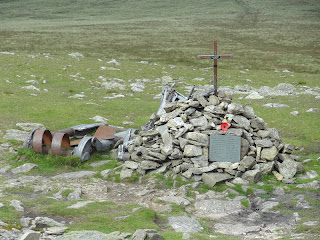 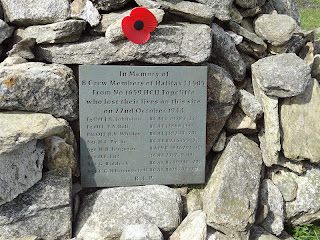 It doesn’t matter how many dozens of times i have passed this place i still stop and read the inscriptions. Some of the Halifax wreckage is still visible below Carrs in Broad Slack. 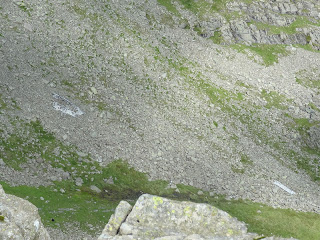 Broad Slack
Approaching the summit i checked the watch and we were in good time. There were plenty of people around who said hello and were dressed for summer. They must have found it strange that we were layering up and putting waterproofs on when most people were layering down.
The thing is, if you keep moving you wouldn’t get cold but standing still for a couple of hours you can still become hyperthermic without realising. So the plan is always to layer up.
We checked in to race control to let them know we were in position and the chat across the radio was quite amusing at times. Being nicely early at the summit gave us a bit of time to wander around and take in the scenery before the business of checking in runners started in earnest.
Just near the sheepfold at the head of Greenburn Beck i spotted a yellow dot. It turned out to be a North Face tent wild camping in a lovely spot. 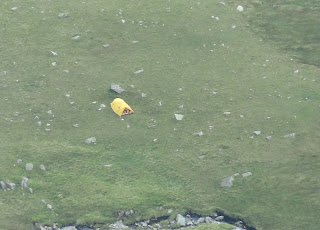 Wild Camp near Greenburn beck.
I have wild camped here myself and although it can get very windy it’s still a lovely spot. We were quite envious of the peace and quiet these people were having in comparison to our noisy night on the camp site. The campsite was very busy with hardly space left on the usual 2 main fields. Anthony, said that this year has been a disaster regarding numbers of campers. So this weekend’s crowds was great to see. He will always find room for everyone even if it means opening up new fields. You will never get turned away unless your too rowdy. 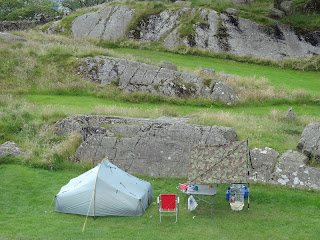 Our base camp set up with Scarp 2 and kitchen basha.
We did get a bit of sarcasm for being glampers this weekend and we were told that if we were not careful we would be heading for camper van territory. Hm. Friends eh.
Still the basha was quite good and if used in the opposite way to the set up above ie long ways, it would be a good wild camp bivi as it only weighs 600 grams.
Time passes by so quickly, and before long we heard on the radio that the first runners were through Grey Friar checkpoint.
We checked the skyline and sure enough the runners were fast approaching. If you have never seen fell runners in full flight then you should make the effort to watch a race. They are lightening fast on the downhills which really does have to be seen to be believed. A few minutes later and we were doing our job of marking times and checking race numbers. 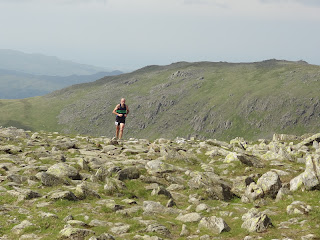 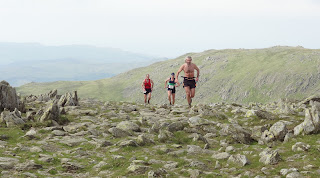 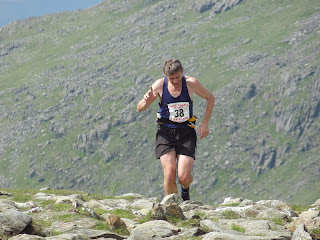 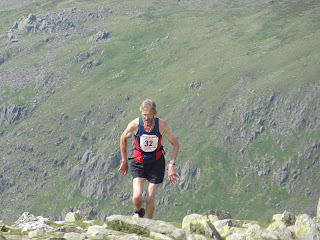 Quite a few walkers had stopped to watch as the runners approached, said thanks for marshalling and sped off heading for Old Man of Coniston. We were asked do they never stop for a sandwich or to look at the views. That gave us a bit of a giggle. Then one lady approached and told us she had seen a runner way off the track and must be lost or something. We explained that runners don’t have to follow strict routes and that as long as they go to all the checkpoints they can use what ever route they want to.
A think she was a bit happier to hear that and away off towards Wetherlam she went.

Due to the fine weather i managed to take quite a few photo’s of the majority of runners and i will put a link at the end of this post for those who may want to have a look and if anyone wants to copy the pictures then be my guest. No need to ask me.
I will also put a link to our photo’s of the weekend. 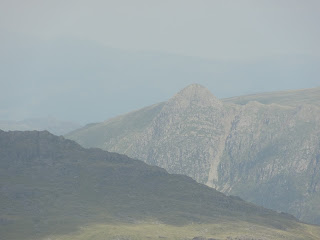 Pike O’Stickle from Swirl How 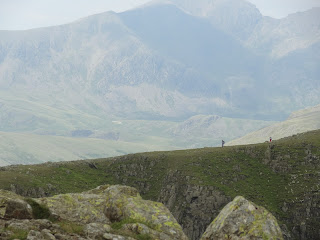 Carrs and the Scafell range in the haze, from Swirl How 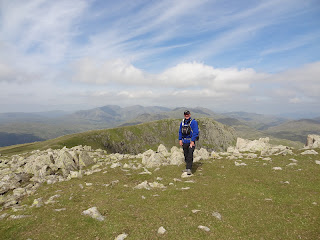 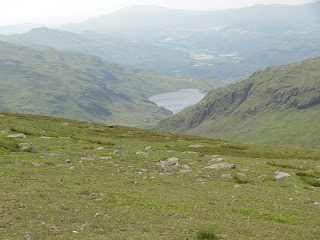 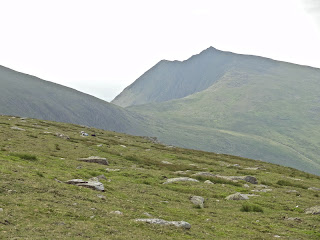 Because we were only the second checkpoint all the runners were soon passed us. This means that if we hurry up we could get back to the start point for the soup and cakes that are put on by the organisers and although because this race is for charity, and there are no specific prizes, the first runner to finish and the first lady to finish always get a hand shake from legend Joss Naylor. We made it back in time, so thanks to the ladies who made the cakes etc, wonderful.
Unfortunately i missed getting a photo of the handshakes because i had left the camera in the car and didn’t have enough time to get it and get back before it was all over. There’s no hanging about with these guys.
However, i was kindly allowed to copy a fellow marshal's image. Thanks Ian. 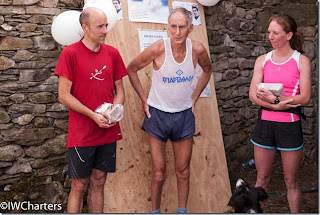 The official race results have not been posted yet but i will amend this when they are available. We had a really lovely day and the weather was fantastic. Thanks for inviting us to take part.

I'm pleased to see that your experience was rather different to last year's, Alan. It sounds like a great day out.

I've also enjoyed catching up with your postings and musing on how soon you will be ceasing outdoor activities in order to build an extension to accommodate your vast amount of outdoor gear!


Hi Martin,.
I am so much fitter now than i was then. (Not as fit as you). I still reflect on that awful day last year. This years weekend was excellent with good company.
To be honest Martin my gear Collection is not that great. True, i have too many mid layer “jackets” but i try and sell off gear which is in good nic but has become redundant in order to pay for the new stuff. Its a gear evolution.

Very interesting Alan and, like Martin, I'm pleased that you had a better experience than last year. Well done for capturing the 'action'.

Hi Gibson,
We had a superb weekend. The route of the race will make a very scenic day walk. I think its the only race I have managed to take photos of most runners.

I'm happy to hear your race day was better than last year. 'Glamper', what a nice new word for me! :)

Thanks Maria, much beter.
Glamper, an amalgamation of glamour and camper. Usually a very large, house size tent is also involved but i'm not going that far.