A circular walk above Marsden

I felt a need to get out for a walk and recently i have been doing a few walks around Diggle and Marsden and so it was, i headed out that way again. You tend to spot other walks when you are actually walking and you pencil them into the brain saying "i will come back and do that when i get chance".
Well i had chance and off i set.

As i did on my last walk with Sheila and Dorothy, i parked on the A62 at (SE 01762 09471). This time when i got out of the car i could see my route. It had been raining on the way down but fortunately the cloud base was high and it had actually stopped. We have had some heavy rain recently so i was happy not to need waterproofs.

The car park only had two other visitors, one a "rep" type, not a walker, and the other just arriving back having walked the dog. A lovely Springer Spaniel.

Putting my jacket in the sac and setting my GPS to record the route and mileage i set off North along the Pennine Way. Good views in all directions and just a hint of a cold breeze and a few threatening looking dark clouds. Funnily, i didn't recall doing this section of the PW, when i did the long route many many years ago.

A herd of cows and calves blocked my access into a walled field and i was just a little apprehensive as i approached. I'm not bothered by cows but the access point was narrow and there were quite a lot of them. I looked for an alternative path and at one point the wall was easy to get over but the other side was a morass. I decided to bite the bullet and walk calmly through them. I was prepared for them to spook, turn and run or have a go at me but they didn't bother one bit, neither mother or calf. Phew. 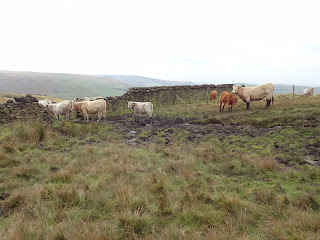 I quickly reached the trig point 448 Metres on Standedge and stopped to take in the views to the west of the ridge line and Castleshaw Reservoirs.
Again lots of potential routes were under development as i walked on. 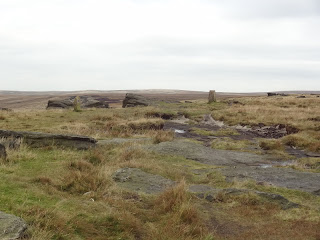 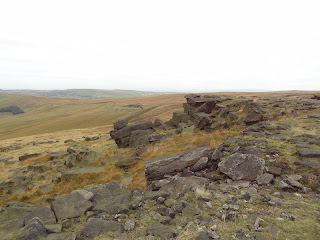 I came across a plaque cemented to one of the outcrops, it simply said AW and an arrow pointing west.
This pointed out the resting place of Ammon Wrigley, a local poet, who's ashes were scattered here. I photographed his statue a few posts back in Uppermill.
The following verse also accompanies the plaque as well as plaques to his two daughters.
Winds of the Pennines fresh and free, You were ever good friends to me, Out on the moors from morn till eve, Happy with you and loth to leave.

The breeze had picked up a bit and i took the chance to put my jacket on.  Occasionally the odd drop of rain coloured the gritstone but not enough to care about a waterproof.

In the distance i spotted a fellow walker coming my way and in 10 minutes or so we had closed the gap. "Are you doing it all",  he questioned. With a bit of a laugh i replied." No, not today anyway". He gave a smile and carried on, hood up and waterproofed.

I wasn't walking fast, i love being on the moors, especially on days like this where the breeze is wafting the metre tall grass and the colour changes with every wave. A few Buntings and Skylarks were being blown about as i spooked them from there hiding places. I spotted a hang glider and then another. They were using the thermals from the top of Hard Head. 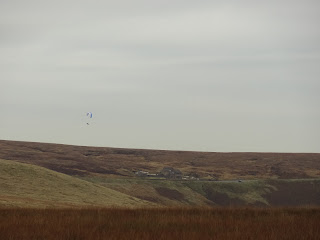 My route was to hit the A640 and then turn South East along the Willykay Clough but just where the clough crosses the PW there was a path crossing which isn't marked on the map. I checked the terrain and it was obvious that many people doing the same route as myself had decided to cut out the corner and meet up with the marked clough path lower down. I took it and i was correct. 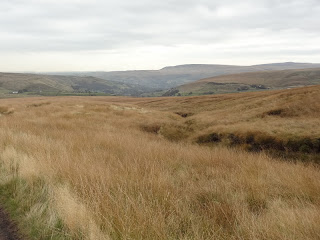 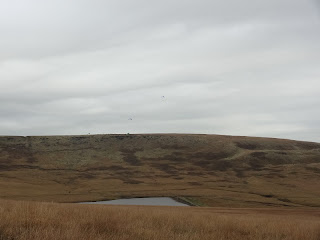 March Haigh Reservoir came into view as i made my way along the path and a couple of tributaries had to be crossed. It's a good path for most of the way down to Close Gate Bridge. The heritage board adjacent to the bridge is quite interesting and informative, telling of the history of the bridge and the pack horse route. 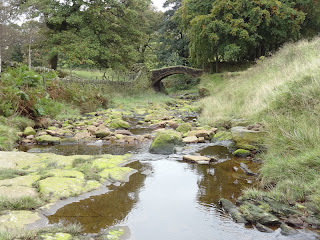 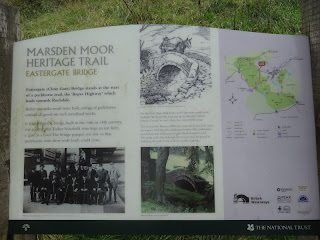 I checked the map here to see where i could access a route up Pule Hill. If i crossed the bridge i would have a bit of a road walk into Marsden and then a steep climb back out.
A path marked on the map crosses Redbrook Clough and then ascends up to the A62. I got to the beck to find it running quite fast and deep, as though it was trying to escape from the dark clouds higher up stream. I could see the way sign on the opposite bank but the water looked touch and go. I was going to take my boots off and paddle through but the bottom wasn't clear, the dark brown peat causing discolouration. I took the plunge and paddled knee deep through it. It wasn't a wide beck, but there was a weir and a deep pool below it and so with consideration i quickly got to the other side with boots full of water and wet trousers.
I was wearing Rohan Ether trousers and i was amazed at how well they performed. They got wet obviously but they didn't soak up the water and they dried rapidly. Very impressed. 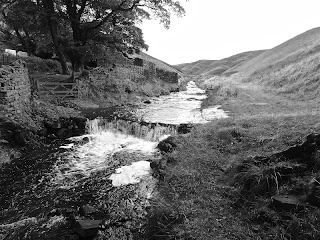 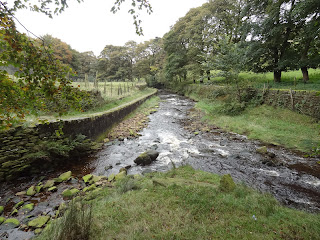 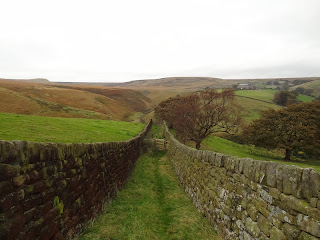 When i reached the A62 i stopped for a coffee and a bite to eat. I checked the map again and saw that there was no path marked on the map except a path parallel to the A62. I wanted to go up not parallel and so i thought i would just head straight up until i meet up with the path on the ridge. A big mistake.
When i first started up i was walking on sheep trods, through old quarry workings but once on the open fell side it was a nightmare of deep tussocks and deep pools. I regretted my decision but i was half way up now  and just carefully plodded on. 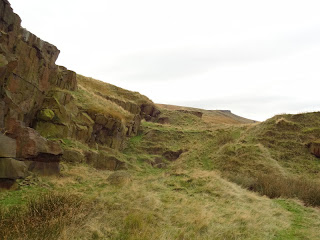 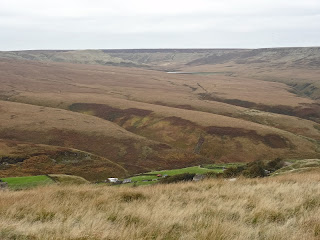 It was slow but the views from the ridge were worth the effort. I stopped for a few minutes taking photo's and letting the sweat dissipate. I had taken my coat off back where i had coffee and it stayed in the bag for now as i was warm and i needed to cool off.

As i set off along the ridge i was being followed by only the 2nd person i had seen on route. He was moving quite quickly, his 2 poles working in unison. Again, i was in no hurry and stopped frequently to take pictures. he soon caught me up and with a brief "Hello" he was off. Not even stopping at the top to take in the views he was soon down at his car parked on the old road. (Mount Rd). 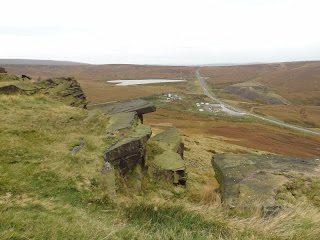 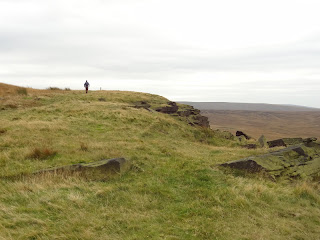 Only the 2nd person i had seen on the walk 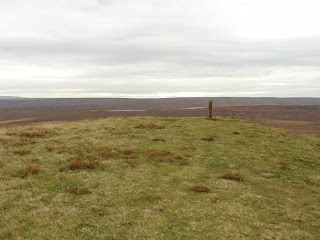 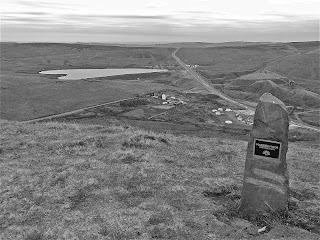 I stopped at the top and was chilled enough to put my coat back on. After a few minutes taking in the view i set off again heading for the junction of Mount Rd with the Standedge trail. Instead of heading back along the road to pick up the footpath i just headed off across the moorland. Had i not learnt my lesson on the way up Pule Hill, obviously not. The moorland was boggy, saturated and smelly. I was glad when i reached the dyke and the path that terminates at Redbrook reservoir. 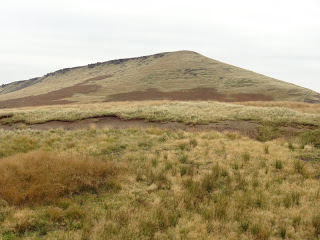 Looking back at Pule Hill

I noticed my boot was leaking badly and as i hit the road noticed that the sole was parting company with the upper. I stopped and couldn't believe my luck. I only had about 10 minutes more to walk and it might just make it.  I tied it up with some dyneema as it was flapping badly. 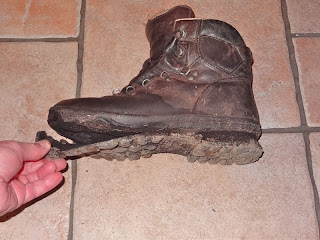 I got back to the car just in time. While i was enjoying the last of my coffee and a piece of Soreen malt loaf the rain started. It was heavy, i couldn't see out of the windscreen. I had a wry smile to myself that on this occasion i won. 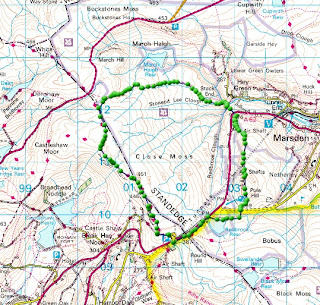 Very good, Alan. I've just enjoyed catching up with your missives. I think I'll pop up to Standedge soon when I get bored with the flatness of North Cheshire. I hope you gave the Berghaus man your shoe size, and feel free to direct anyone supplying Rohan Ethers for test in my direction (ha!).
Martin

Thanks Martin, Give me a shout when you feel like going. I still have a few pairs of boots so desperation hasn't set in yet. They will last me a while. But that doesn't mean i wouldn't mind testing a pair.
The Rohan Ethers are not bad at all. I havn't done a review of them yet but i will over the next few weeks. Unfortunately Rohan have never offered me anything either, so you are not alone on that score.

Now this is weird with the Salomons and their soles. You can see mine in this post: http://mostlywalking.blogspot.fi/2010/12/last-walk-of-year-also-featuring.html

I haven't specifically taken photos of the problem, but if you look carefully at the pics you can see it. Just like you I liked the Salomon boots and they had been with me e.g. in the Alps so it was hard to say goodbye to them. But in the end I threw them away - we don't have enough store room anyway, so crap gear must out.