We did this walk on Friday 19th October. It’s a top or a number of tops that i hadn’t done before.
We were staying on a working farm, in a railway wagon. Sheila calls it rustic camping. 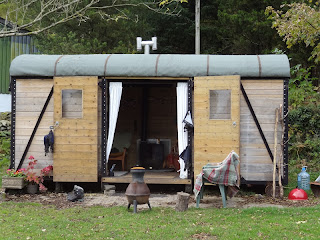 The farmer asked us where we were going and with a bit of a face pull, said, "What do you want to go up there for, there’s nothing there.” when i said Top O Selside. My reply was “Because we have never been there”.

I was so pleased we were not deterred.  It’s a lovely walk.

From High Nibthwaite the route starts off on a wide stoney path which i presume in years gone by would have been a pony trail. It climbs steadily running parallel with Coniston Water and giving fantastic views along the water and into the Coniston range. Today, the Old Man and adjacent high fells were not on show, covered in a blanket of thick grey clag.

The mist, which thinly covered our route initially, was beginning to clear as the morning warmed but for a short spell Sheila donned her waterproof as fine rain fell. I resisted the waterproof, just relying on my Rab Boreas for a short while. It stopped within 10 minutes and although damp i wasn’t wet through. It quickly dried off.

The map shows a path exiting to the right from our trod, just above Broad Hollins, to gain the summit of Top O Selside. If we were just out to Bag the top, which is a Marilyn, then this is the way to go, however we were out for the day and therefore took a longer route.

When the path starts to turn north east, a beautiful vista opens up and reveals the buildings of Low Parkamoor and the ruin of High Parkamoor. 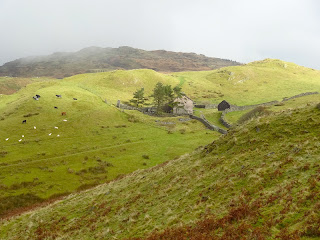 Low Parkamoor is a 16th Century Grade 2 listed building, owned by the national trust,  used as a retreat for Artists and is run by the Grizedale Arts. The building is quite basic, water still drawn from the well, cooking done on a wood burning range. It’s in a fantastic spot and would inspire anybody to draw or paint.


High Parkamoor is now just a ruin. It was still in use in 1829 but not in the 1840’s. This area used to produce and supply charcoal for iron smelting in the days of the Furness Abbey.

Our first high point was to be Heel Toe Hill which we sploshed our way up to via a narrow grassy path, (Not shown on maps) that follows a small beck. From the top, the tarn of Arnsbarrow came into view and also Top O Selside.
Still pathless we headed to cross the marked path just north of the tarn which we found eventually and made our way up to the twin summits of Top O Selside.
This area is vast and undulating and would make ideal map reading territory for beginners.

Coffee and Snickers bars were had while we took in the view. It was quite chilly on the top so it wasn’t long before we were off again. 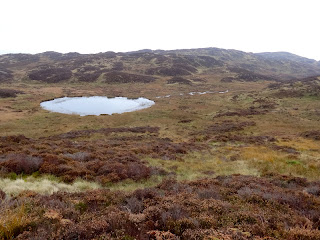 Our next top was Arnsbarrow Hill which is on the far side of the tarn. We found a path which more or less went in our direction and amazingly it took us to the top. Fine views out across Morecombe Bay were to be had but the high fells were still cloaked in mist. 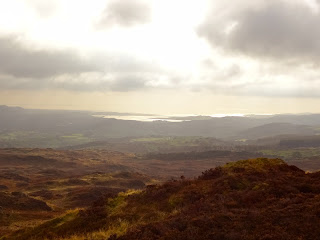 From Arnsbarrow our destination before the descent back into High Nibthwaite was to go up High and Low Light Haw, great names, and finishing with Brock Barrow.

In bad weather the descent off Brock Barrow needs to be taken with care as the drop off is quite severe. A rough path can be found descending from the south east but we chose to go east, picking up the path following Caws Beck. 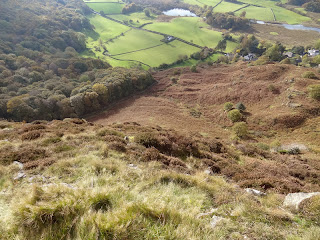 Some more photographs of this walk can be seen. Click on the link below.

Now that is a proper bothy, love it.

It was just like a bothy. Very hot when the fires going and flippin freezin when it’s not. We enjoyed it and there was plenty of wood.