Fellow blogger Martin’s (Postcard from Timperley) plodders walks agenda dropped into my in tray.
I was free and accepted the invite to tread the paths in the town of my birth, Eccles and Worsley.

I caught the 6.50am bus from Rochdale to Manchester along with Sheila who was heading to work.
After an awful full English breakfast in a place we regard as usually decent, Sheila bid farewell and headed off whilst i wandered vagrantly around the streets of Manchester being passed by ipod clad workers rushing to their places of employment. 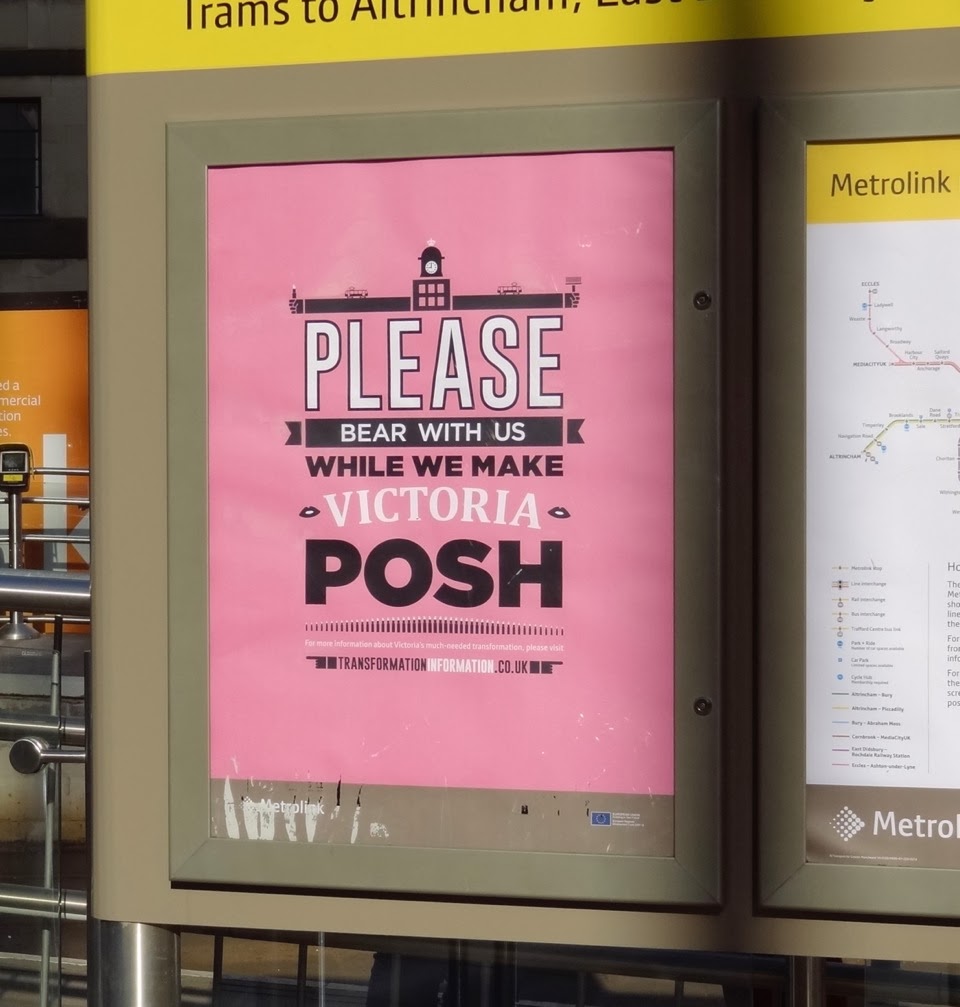 A sign of the times in Manchester
It was a lovely morning, clear blue skies and warming sunshine. (Yes it does happen sometimes in the rainy city). I wandered around the enclosed Central Library which is currently under renovation. They seem to have been doing it forever. I will be glad when its finished and we get a substantial section of the city centre back.

Checking the time, i thought i better head for the tram station to ensure i got to Eccles for 10.30. Its roughly 30 minutes from Manchester centre. The tram was slow and when it stopped at Anchorage i wondered if i had somehow travelled in time. Anchorage! Where the hell did they dream this one up, we were actually in Salford, next to media city.

So we met up in Eccles and managed a quick coffee. Ha, did i say quick. Sorry it should have read pathetically slow.This was in Morrisons. I must have queued for a good 10 minutes just to get a coffee.

There was unfortunately just 3 of us. Martin and a brace of Alan’s. We headed off along Church St and across the main car park to pick up a path that runs parallel to the Manchester to Liverpool railway line. After 100yds we were blocked off by regeneration and had a short diversion to pick up the path again.

As a kid i used to tread these paths and spent many a happy day in Patricroft railway sheds trying hard to avoid capture by adults and train drivers. This was of course in the days of steam and Patricroft is renowned all over the world for building great loco’s. It used to be a noisy hive of industrialisation whereas today it’s a sad disgusting smelly litter strewn hole. 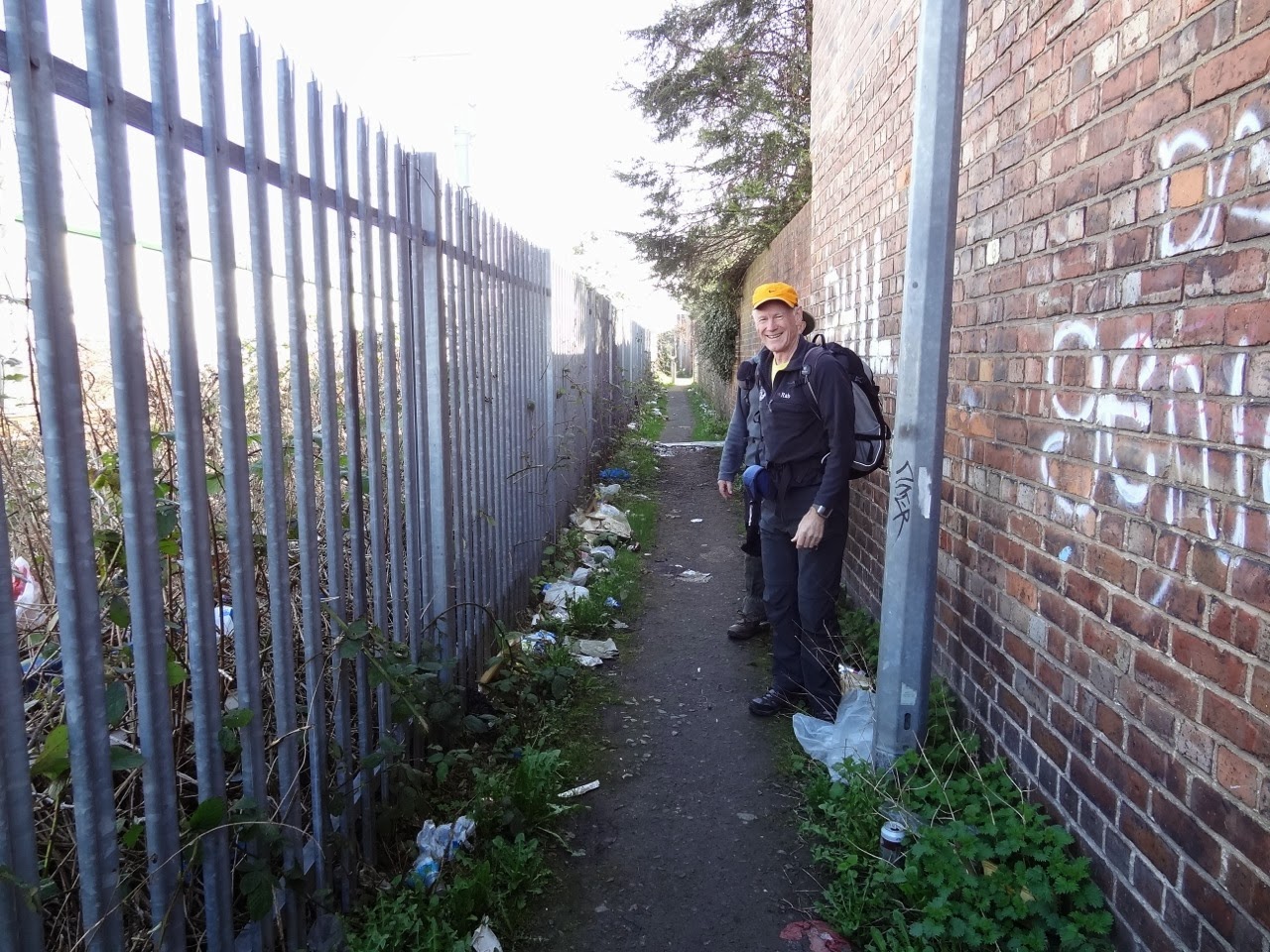 The path adjacent to the now long gone Patricroft Loco sheds.
I think i can vouch for all 3 of us that we were pleased to get off this path. It did actually get worse.
Some photo’s of the old place can be seen here.

And so we came to the Bridgewater Canal where i was a bit shocked to see that the old cotton mill which had stood for generations has been demolished. It had been taken over by GUS and Littlewoods after the mill stopped making cotton but i suppose it’s another sign of the times that the internet has taken over catalogue shopping. 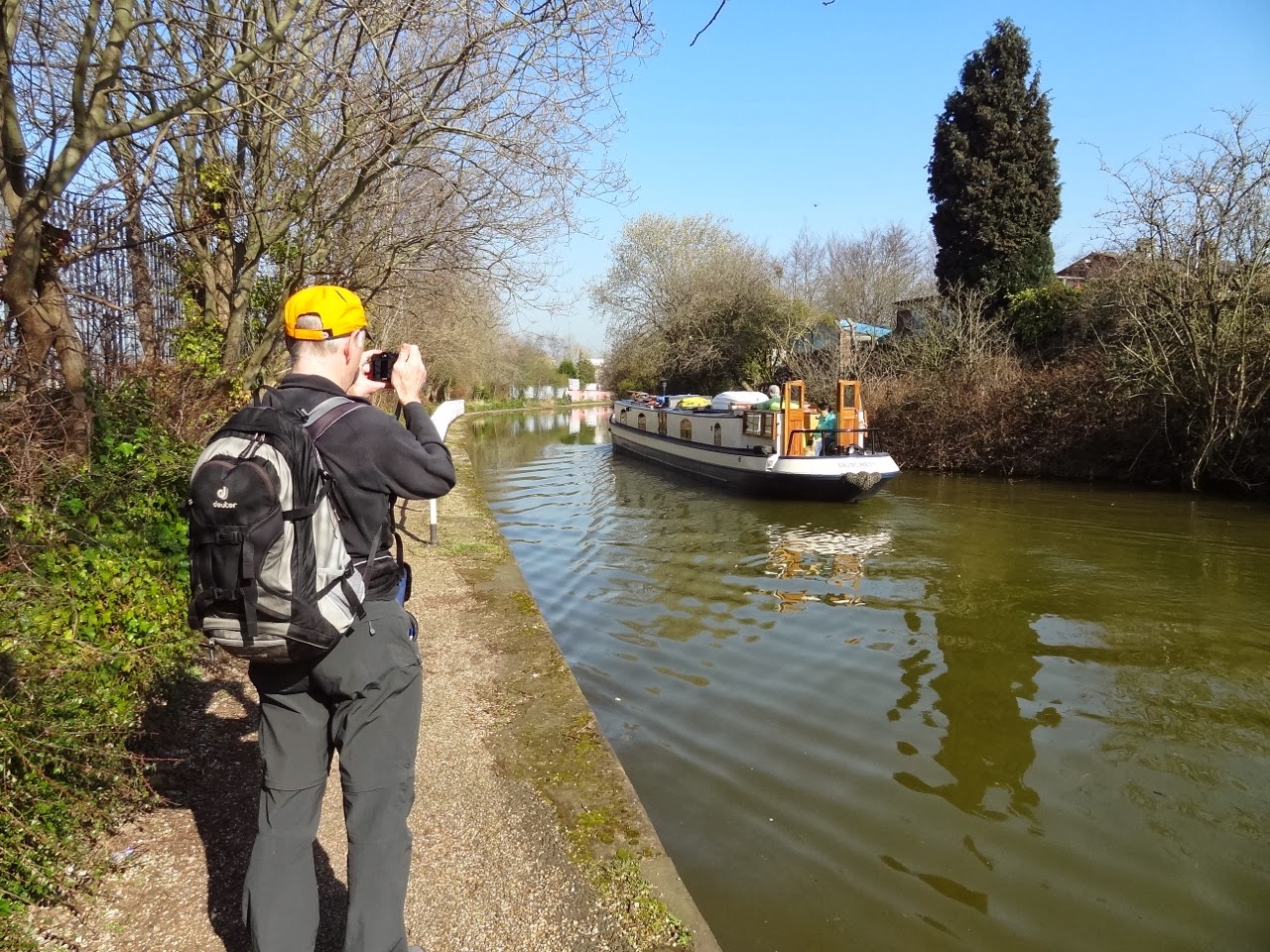 A very nice narrow boat heading like us for Monton.
At Monton bridge you come across the lighthouse, of course a very important navigational aid for those Monton dwellers getting home late from the pub. 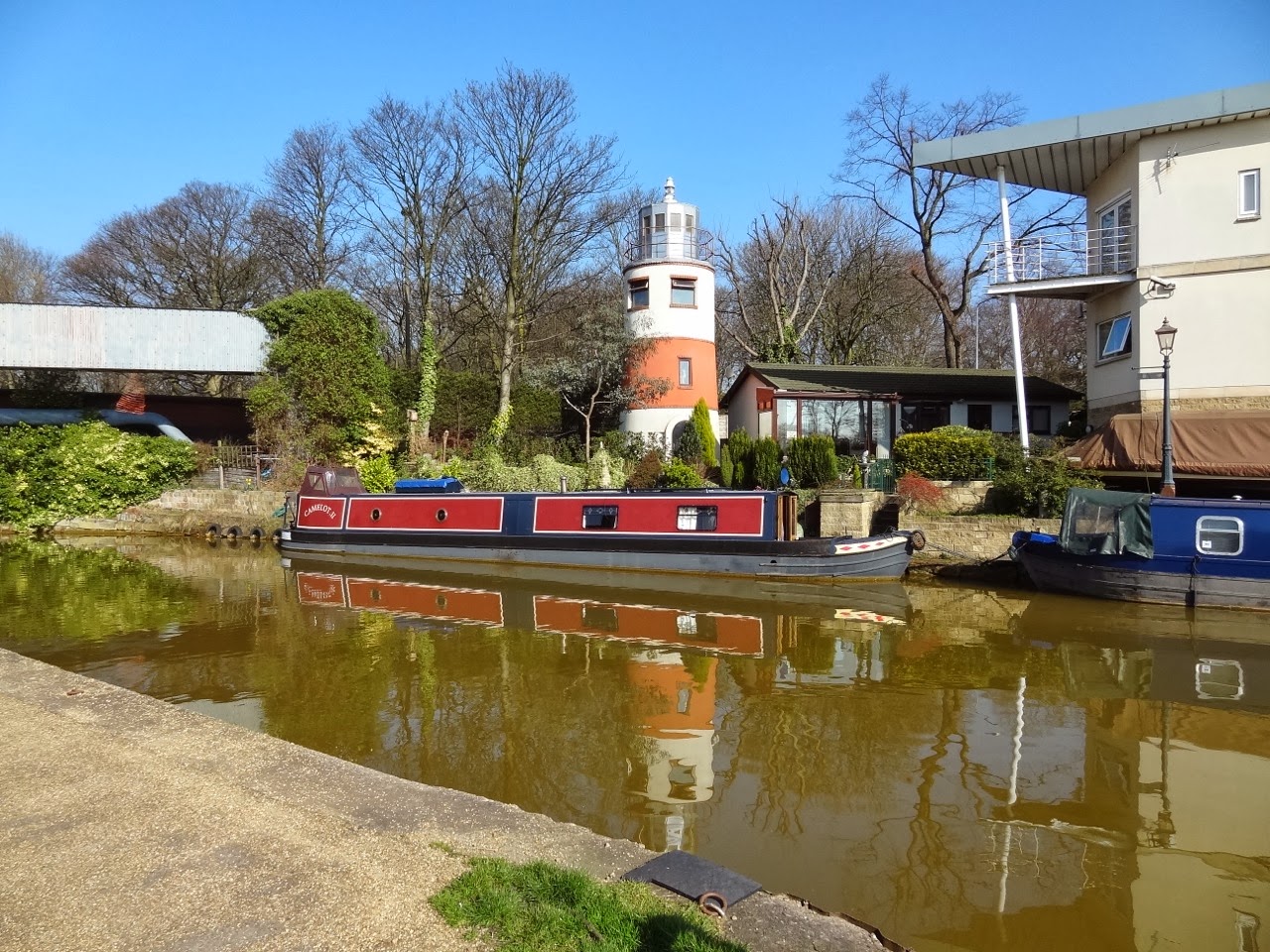 Monton Lighthouse
Moored at Monton and can just be seen under wraps on the right of the above photo is Queen Victoria’s barge. Now you may well wonder what Victoria’s barge is doing in Monton.
Well, it’s a replica, built in 1891. It is exactly as was used by QV when she visited Worsley in 1851.
There is also a pub named the Queens at Patricroft Station that was also re-named after her visit to the area. 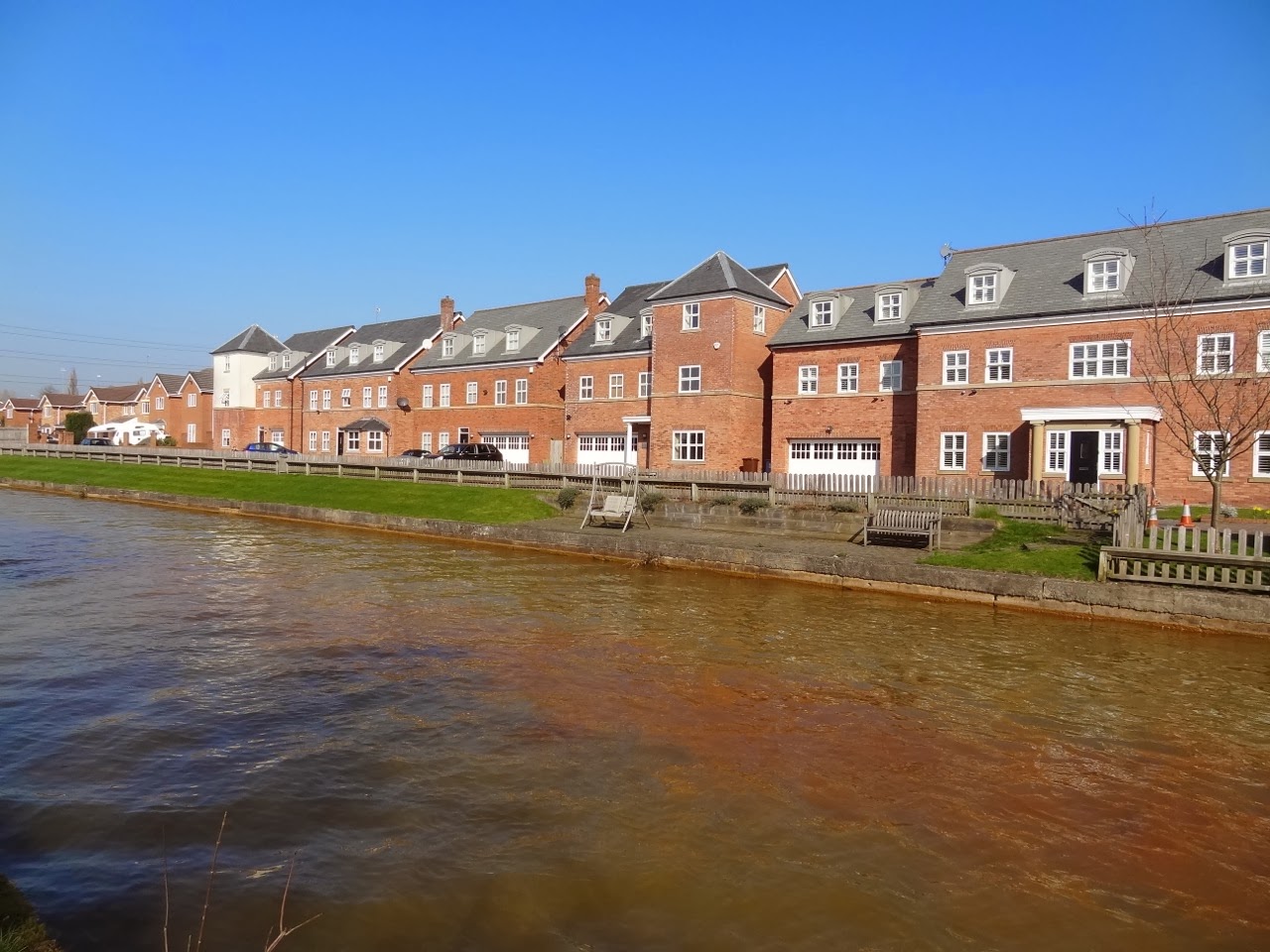 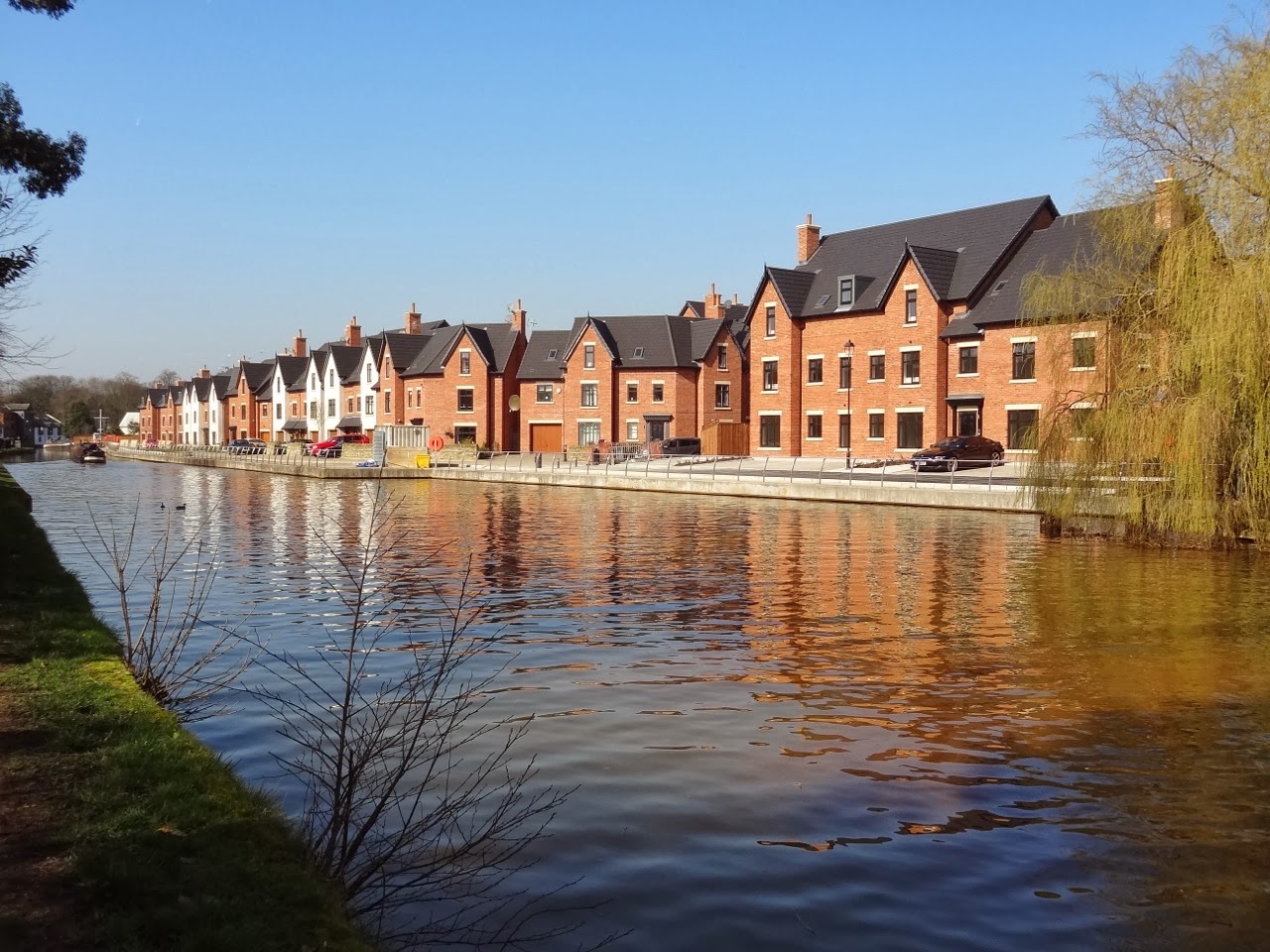 After the degradation of Patricroft the view on the approach to Worsley was just the opposite. (2 Images above) This area was just open fields in my younger days and now its obvious that Mr and Mrs Fat Wallet have moved in. I can only say what a very nice job they have made and it certainly must be a pleasure to live here.
More images of Worsley are below. 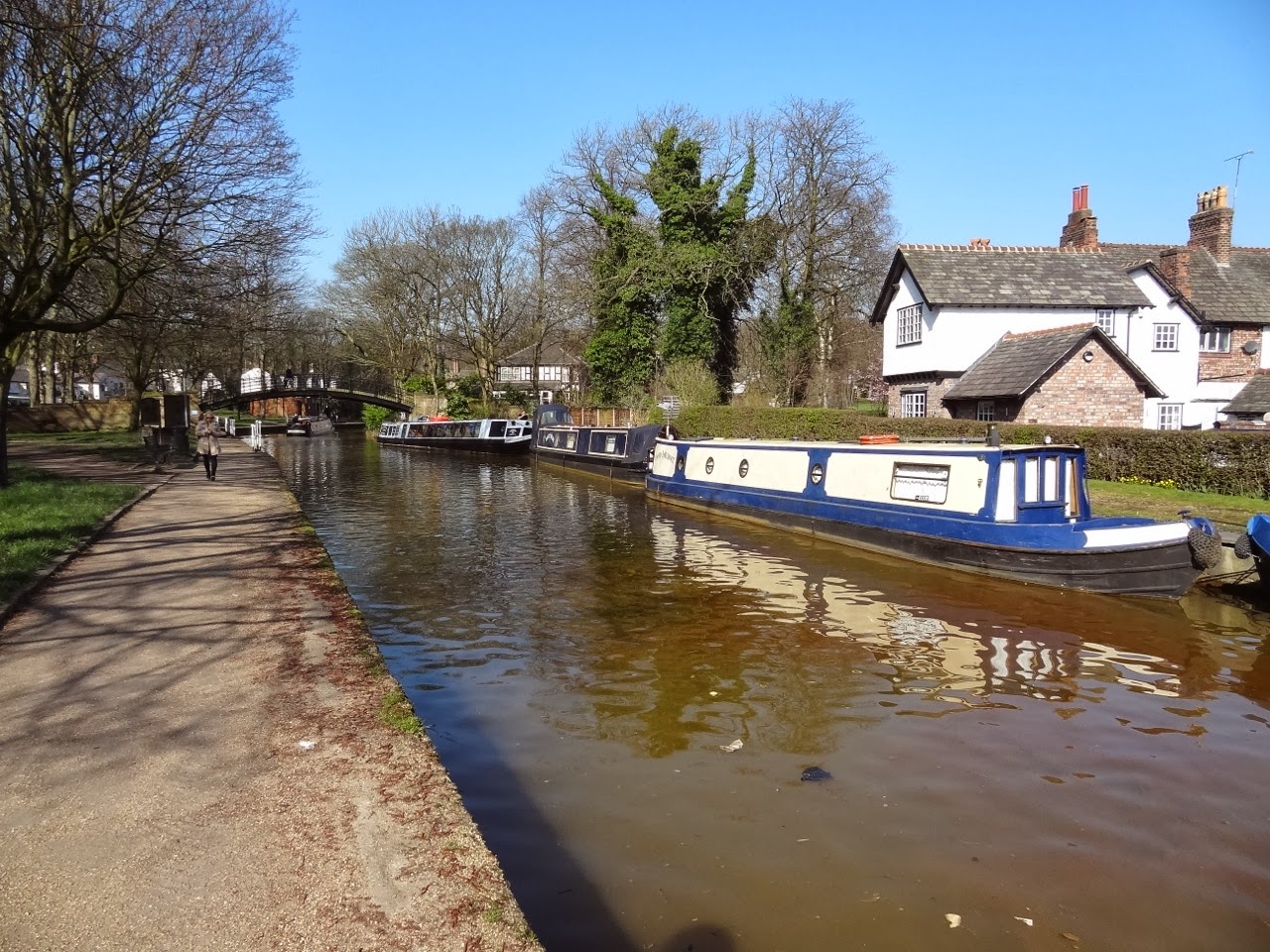 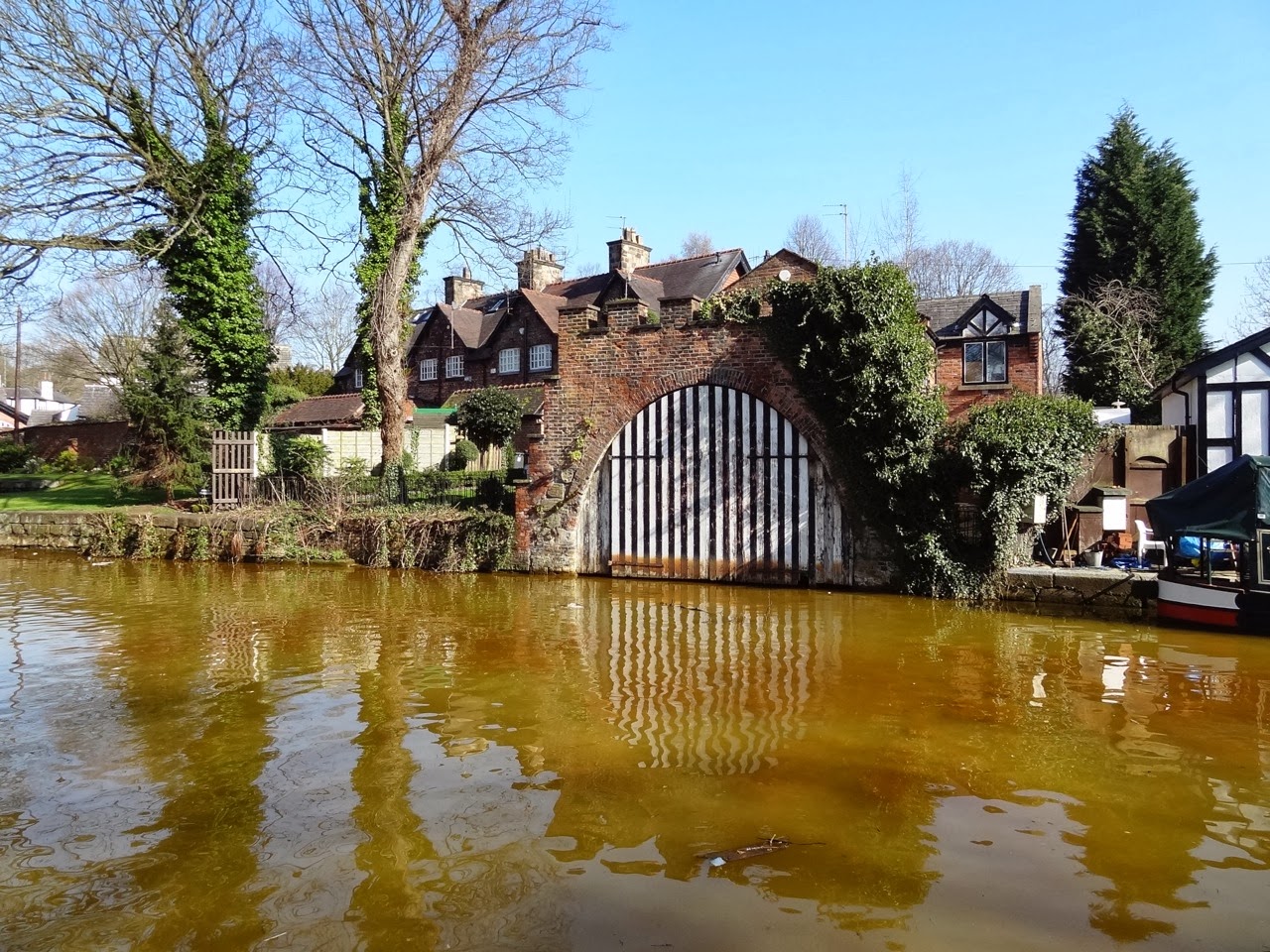 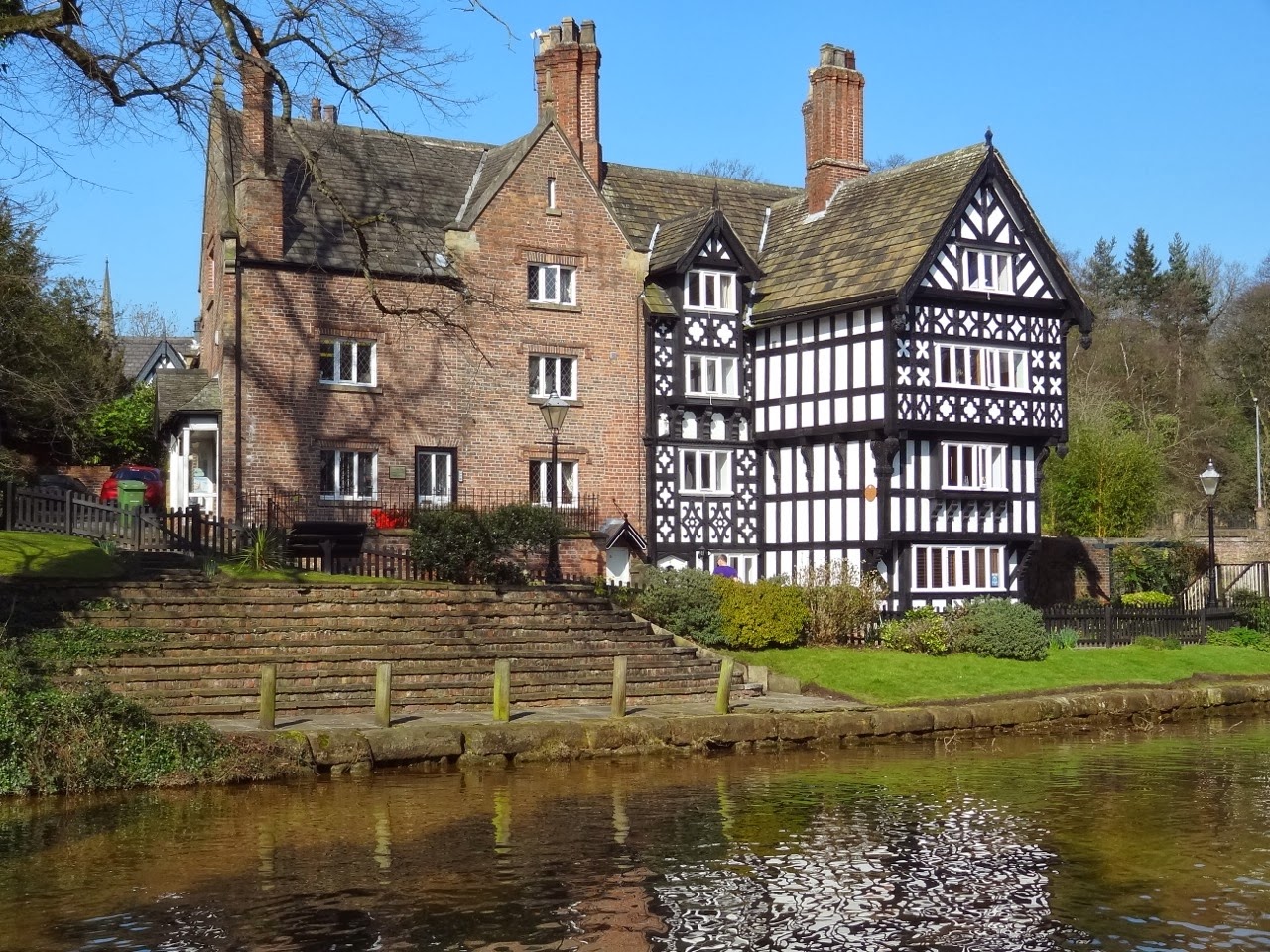 Worsley Boathouse or Packet house as it was called and the old courthouse behind.. 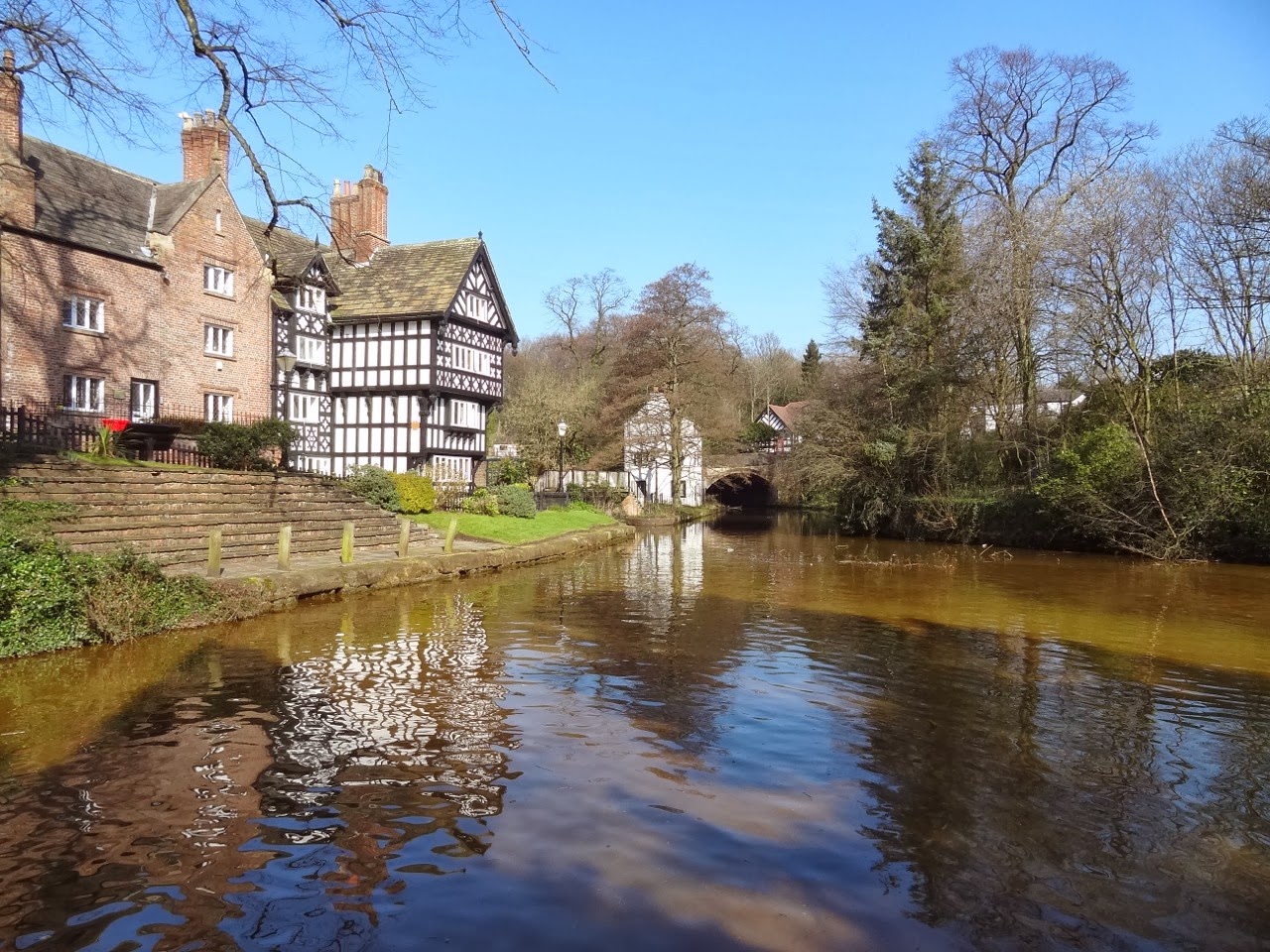 Worsley Boathouse and the Bridgewater. The very narrow boats used in the underground canals used to moor here before going back into the system through the arched bridge beyond. The house was built around 1760 with the tudor section being added later in around 1850.
The mines and Delph are very interesting but today we didn’t go that way. The church here also has a clock which strikes 13 times at 1.00pm. This goes back to the Duke of Bridgewater’s days and was to ensure that the miners didn’t miss the end of the lunch break.
We crossed the main road and entered a leafy walkway on the north side of the Bridgewater canal which we followed under the motorway exiting on a rather overgrown path close to Middlewood Scout camp and Leigh garden centre. 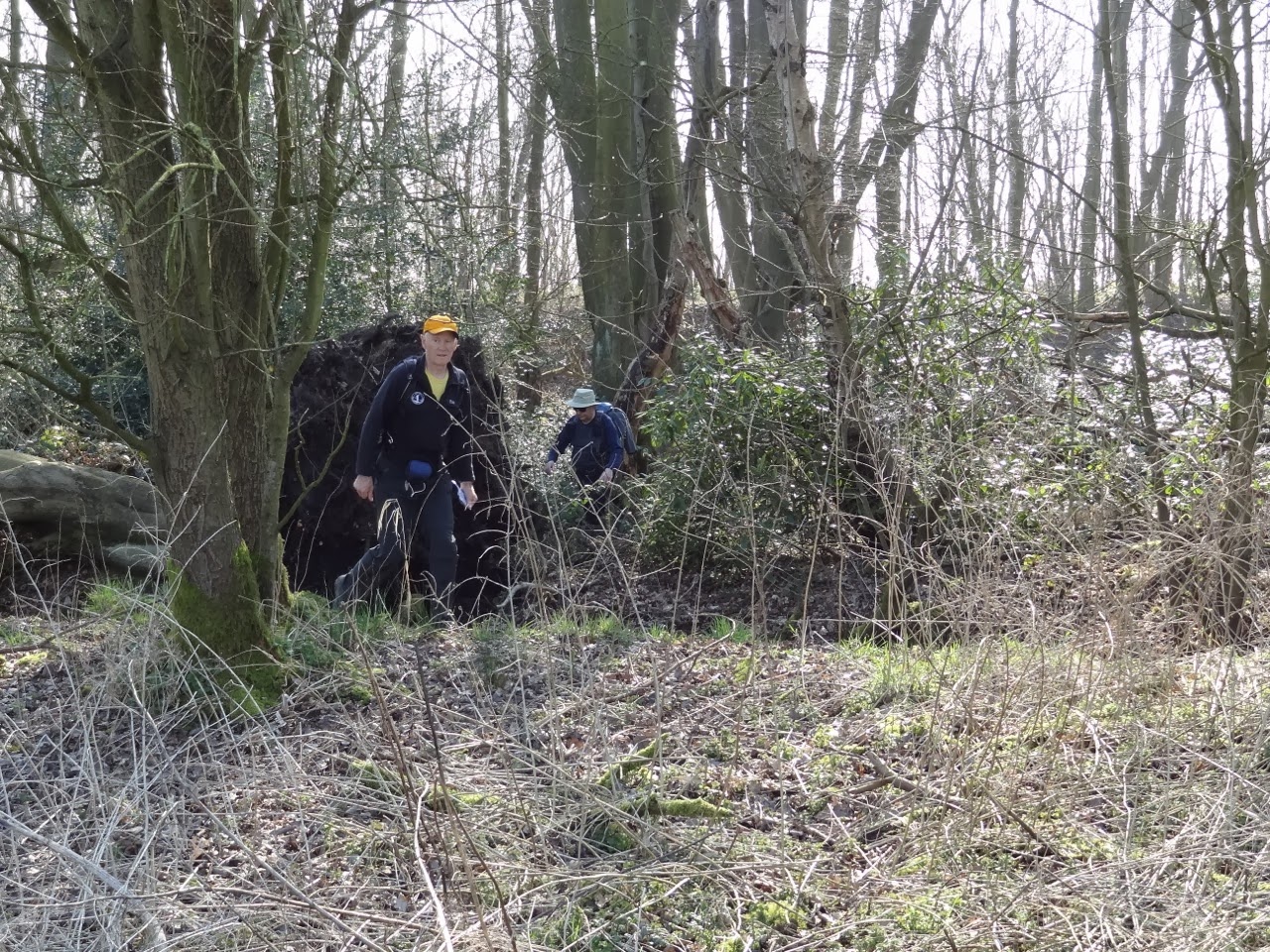 Dr Livingstone i presume. Martin and Alan fight their way through the jungle. 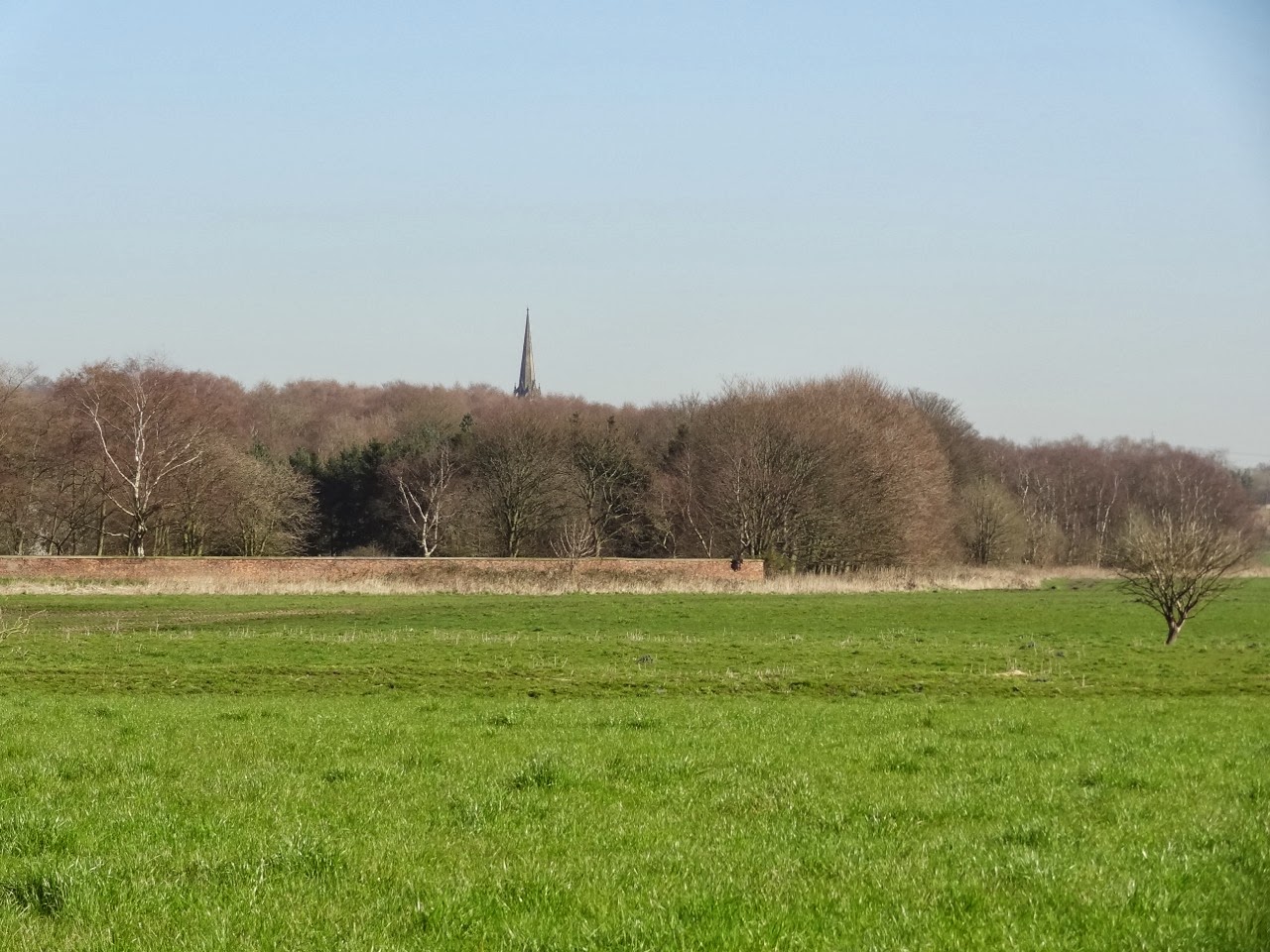 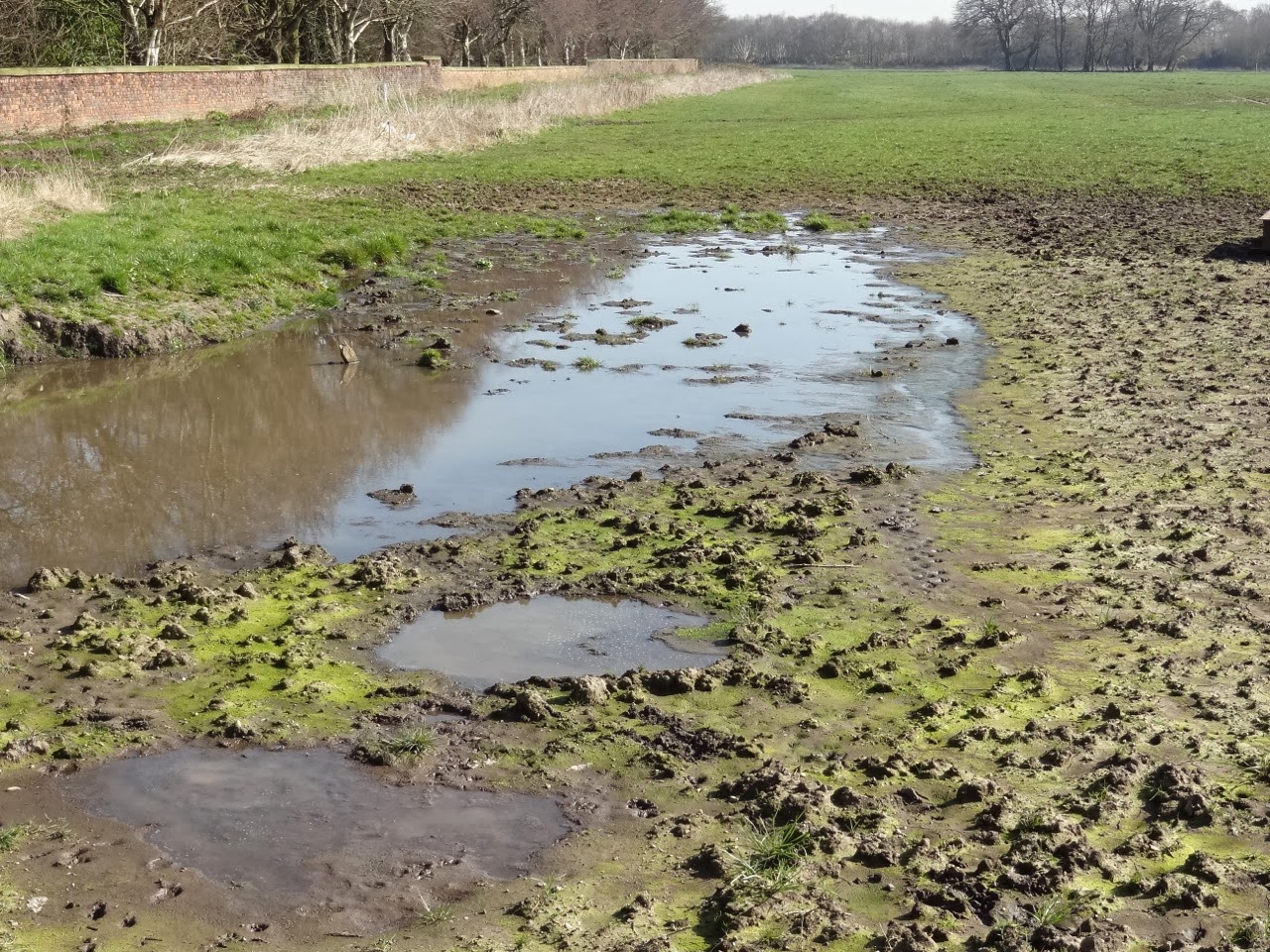 Of course there has to be mud. 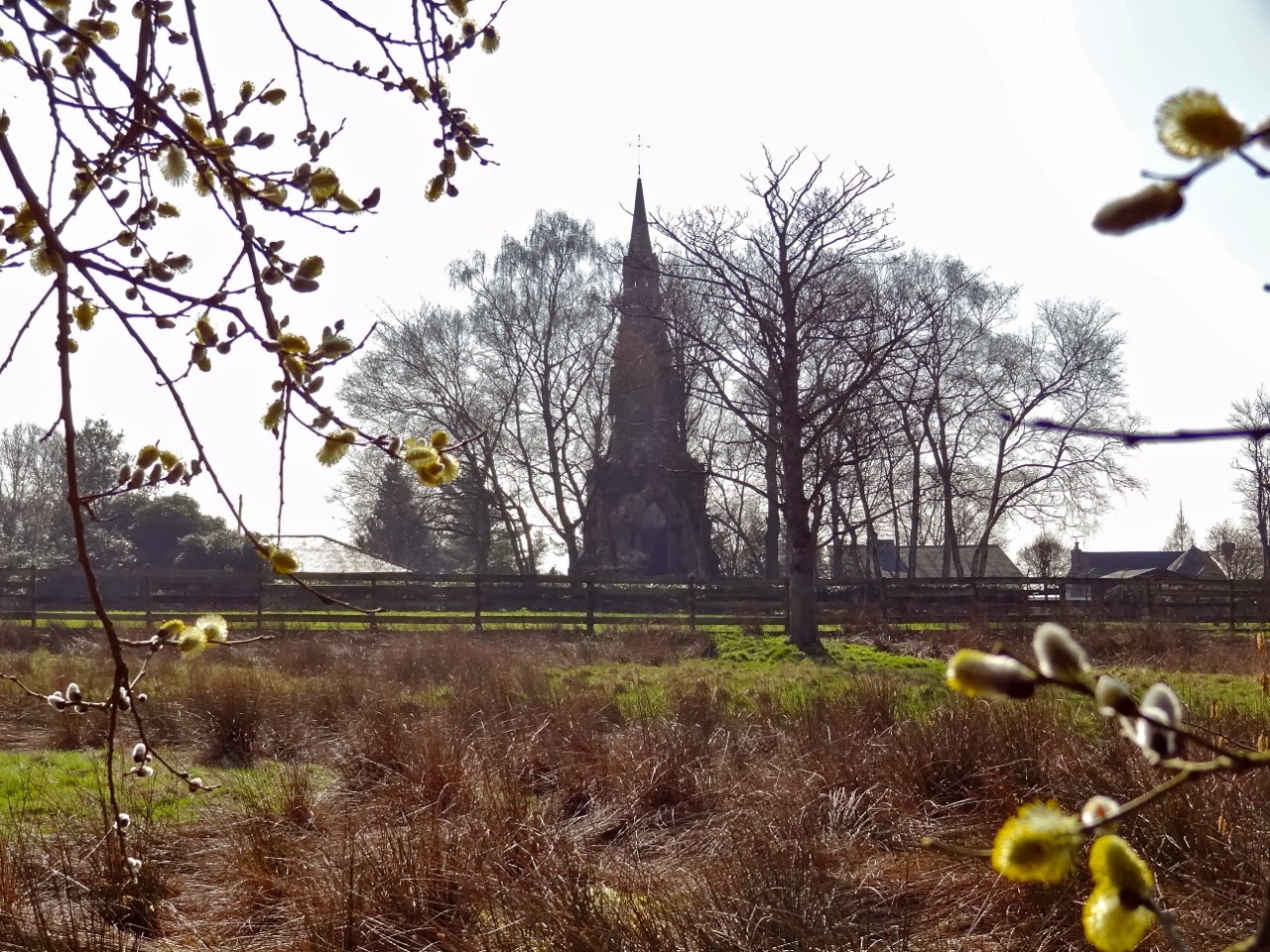 The memorial to the 1st Earl of Ellesmere just off Leigh Rd. This was as close as we got to it. We couldn’t actually locate a public access point. It used to be much higher than today. The centre section was removed for some reason. 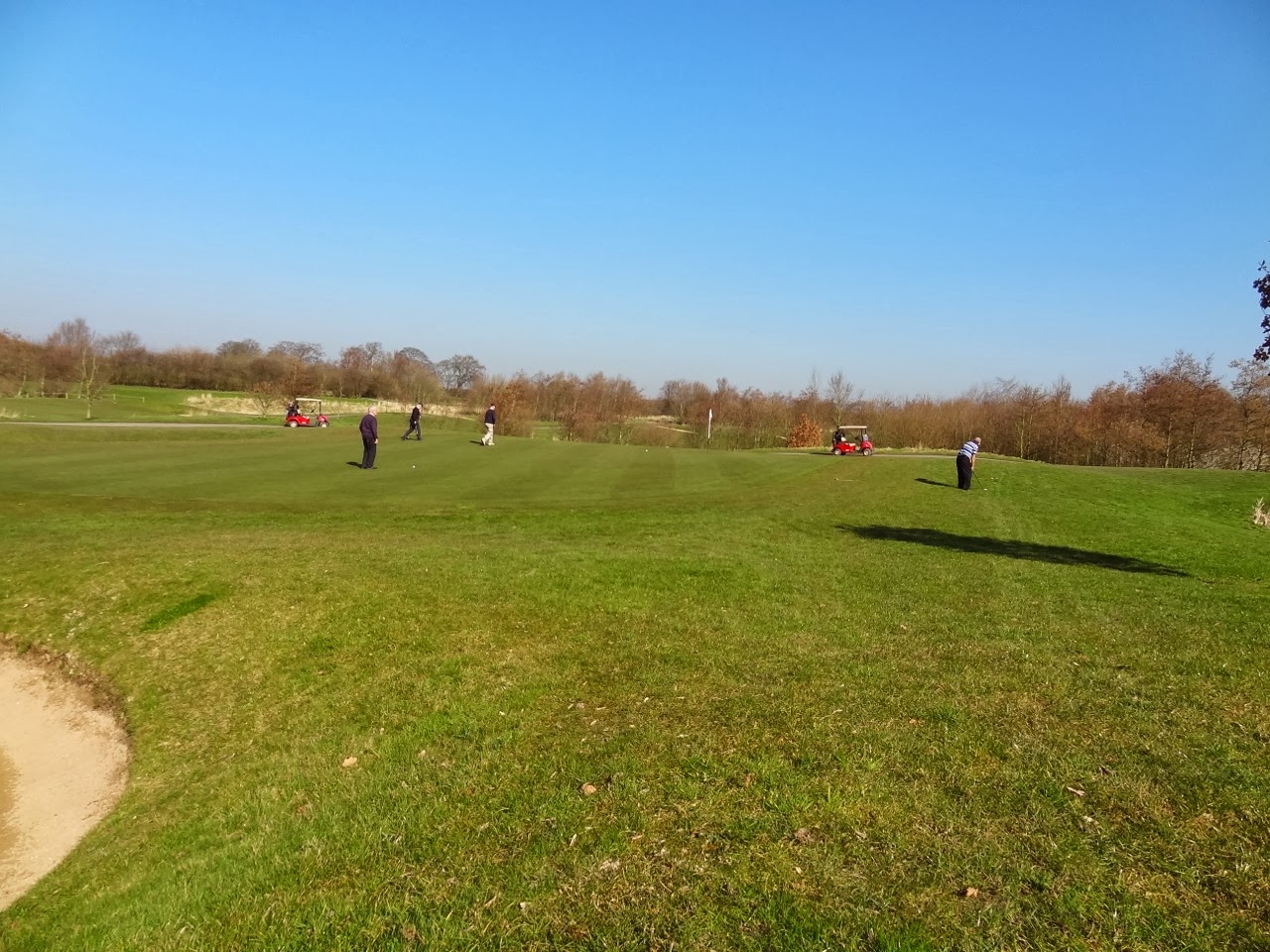 Our prestigious vantage point for a brew stop. Worsley golf course, where we had good banter from the golfers. 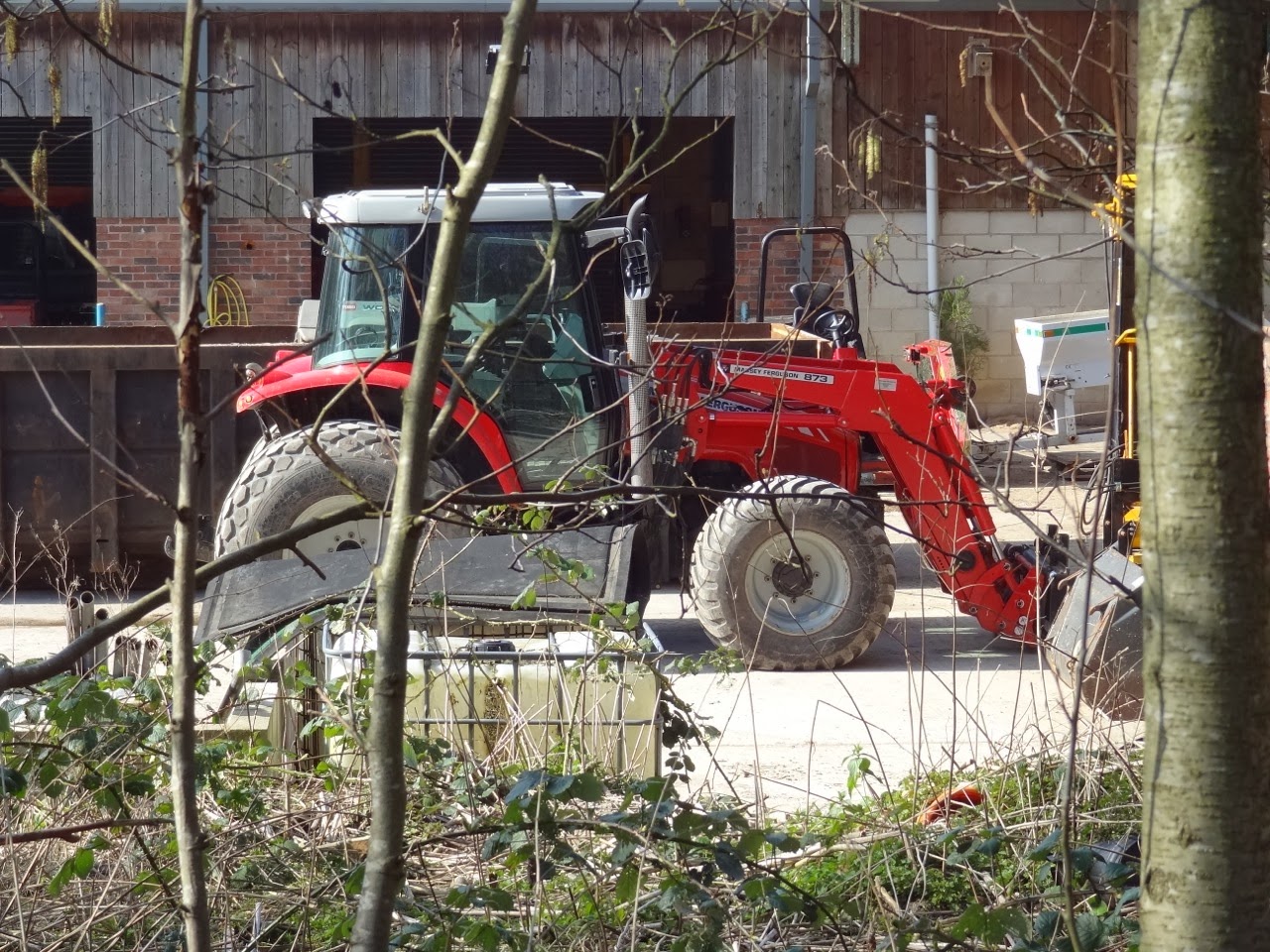 And of course, there is the tractor photo. A new Massey Ferguson with turf tyres on.
We wound our way through the golf course and then across the dangerous East Lancs Rd where you take your life in your hands when crossing. Then in a short distance passing underneath the road again along a quiet forest glade. At this point we decided that lunch was about due and looked for somewhere to plonk ourselves down. A nice bench or fallen log would do nicely but we didn’t find one. Lunch was taken on a steep bank sat on muddy steps along with the leaf litter and creepy crawlies. Oh well. 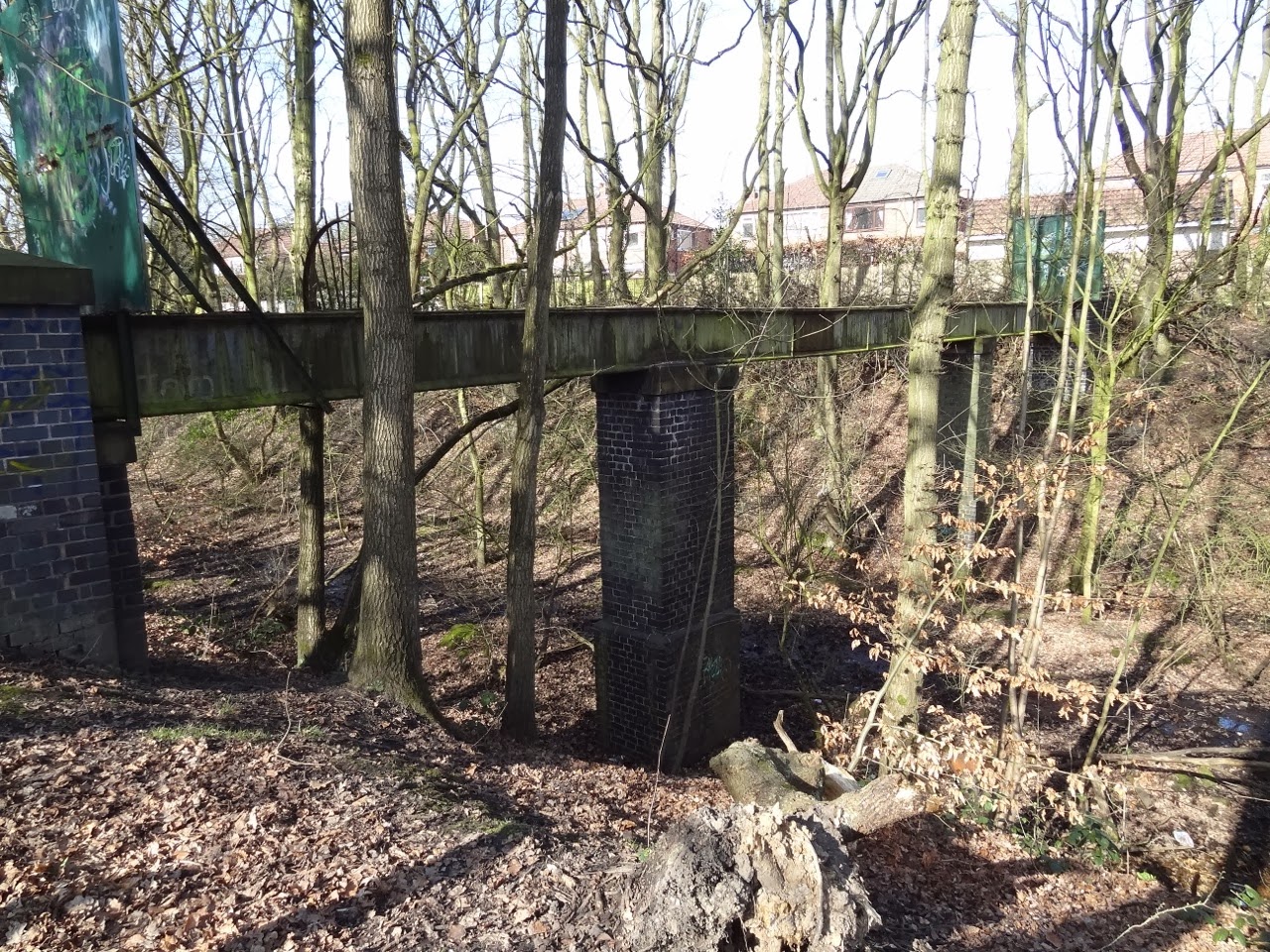 Scenery typical of our lunch spot with an old aqueduct. 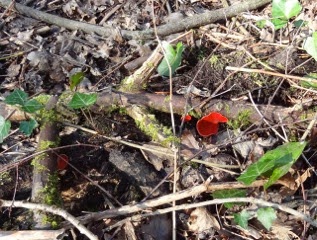 Bright coloured fungi
Fellow plodder Alan had a Garmin gps which was incorrectly set to American grid (If i remember right) so Martin managed to find the menu to alter it to OS grid. One very happy plodder and a worthy lunchtime chat.
So we dusted ourselves off and away we went. Within a very short distance we came across bench after bench after bench. Just typical, especially when we found the one below. 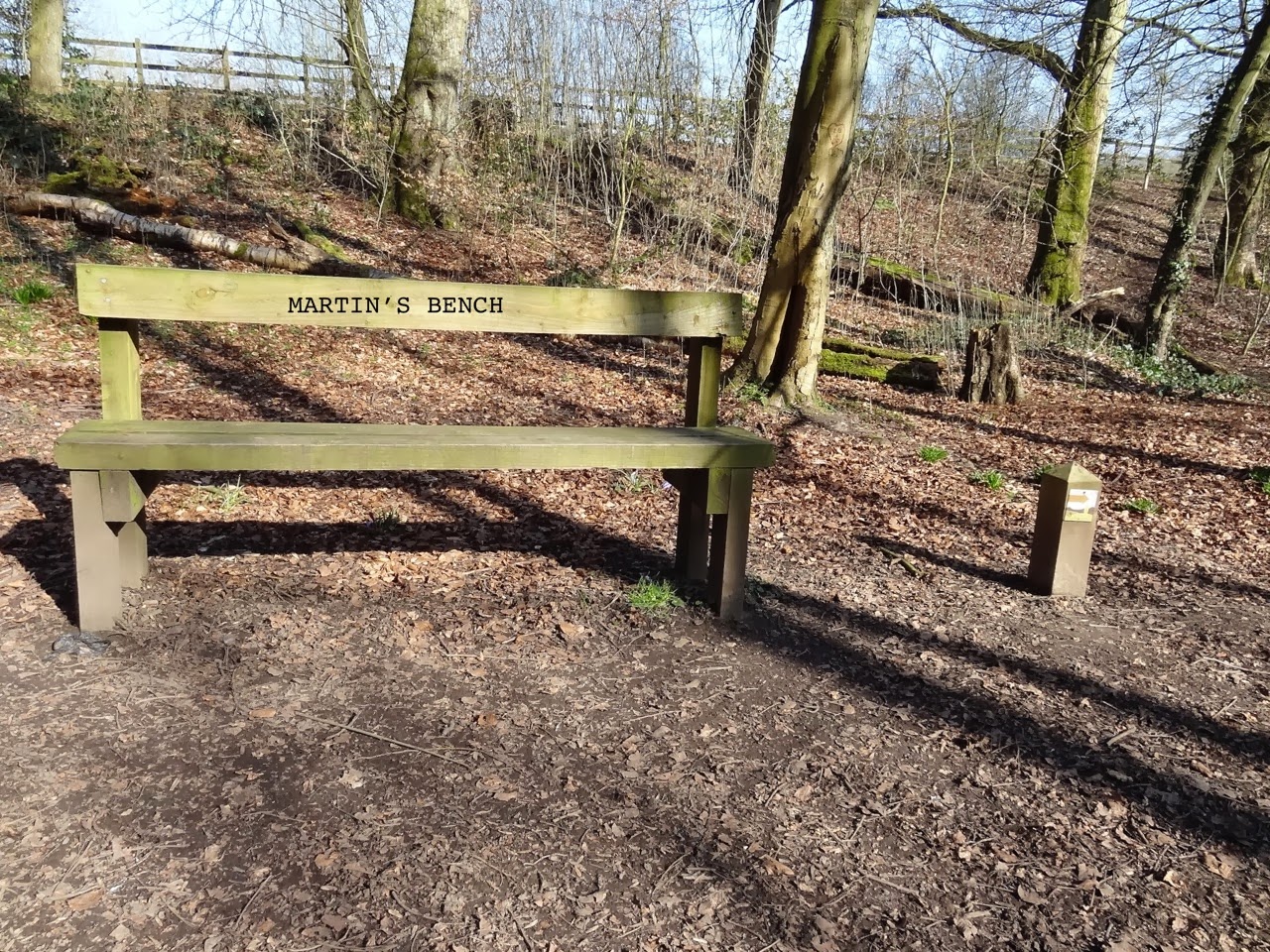 I’m saying nothing!
Along the route many pieces of art work in wood had been carved by a very creative person and it was good to see that they had not been vandalised in any way.
Below is just one of many. 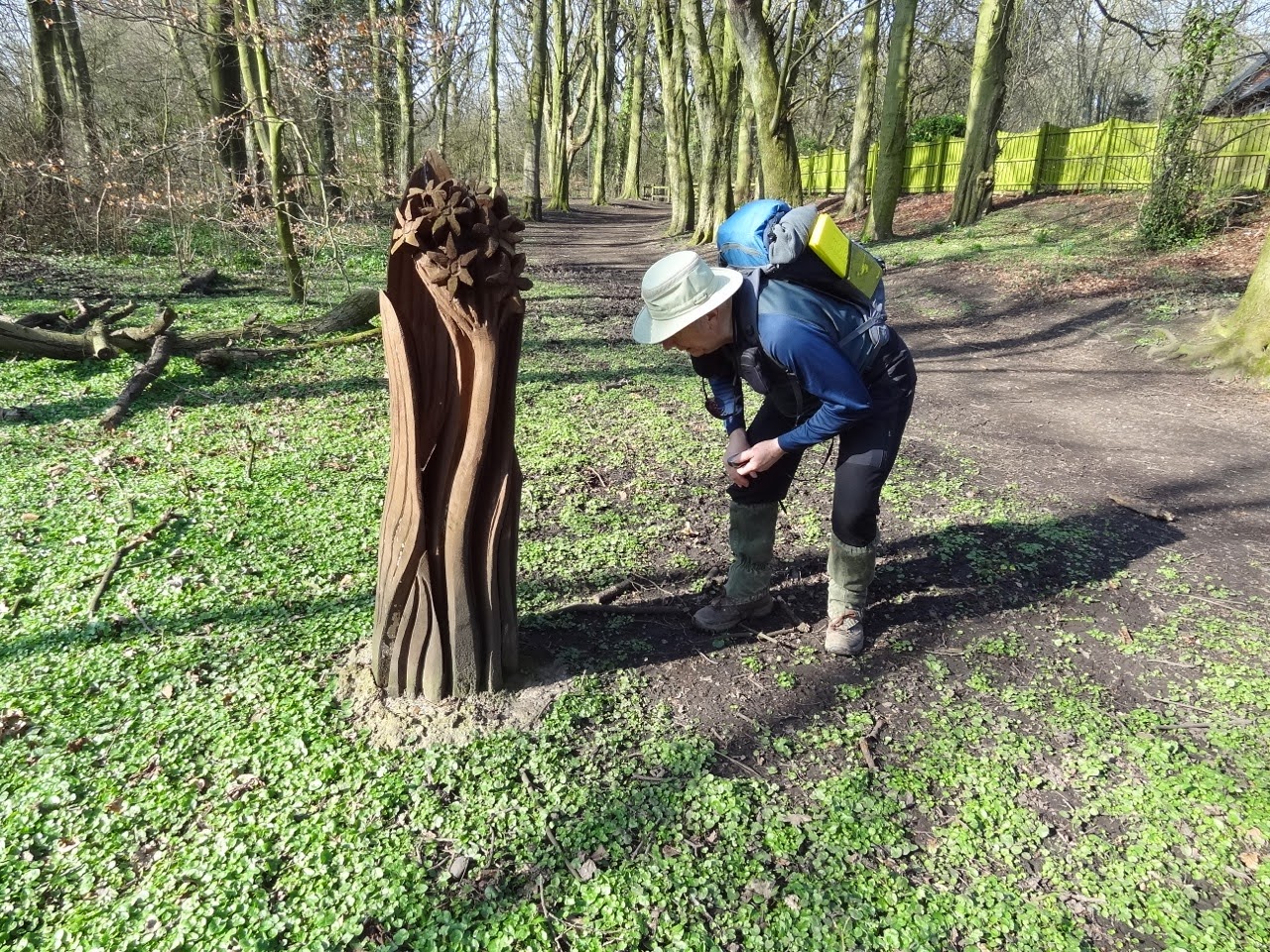 The afternoon was very warm, really like summer. Most of the paths were dry and by the time we came into Worsley Woods and past Warke dam the shadows and the light was very nice. We stopped by the dam to take some photographs and just look at the beautiful surroundings. The old school  building looked like something from Hogwarts. 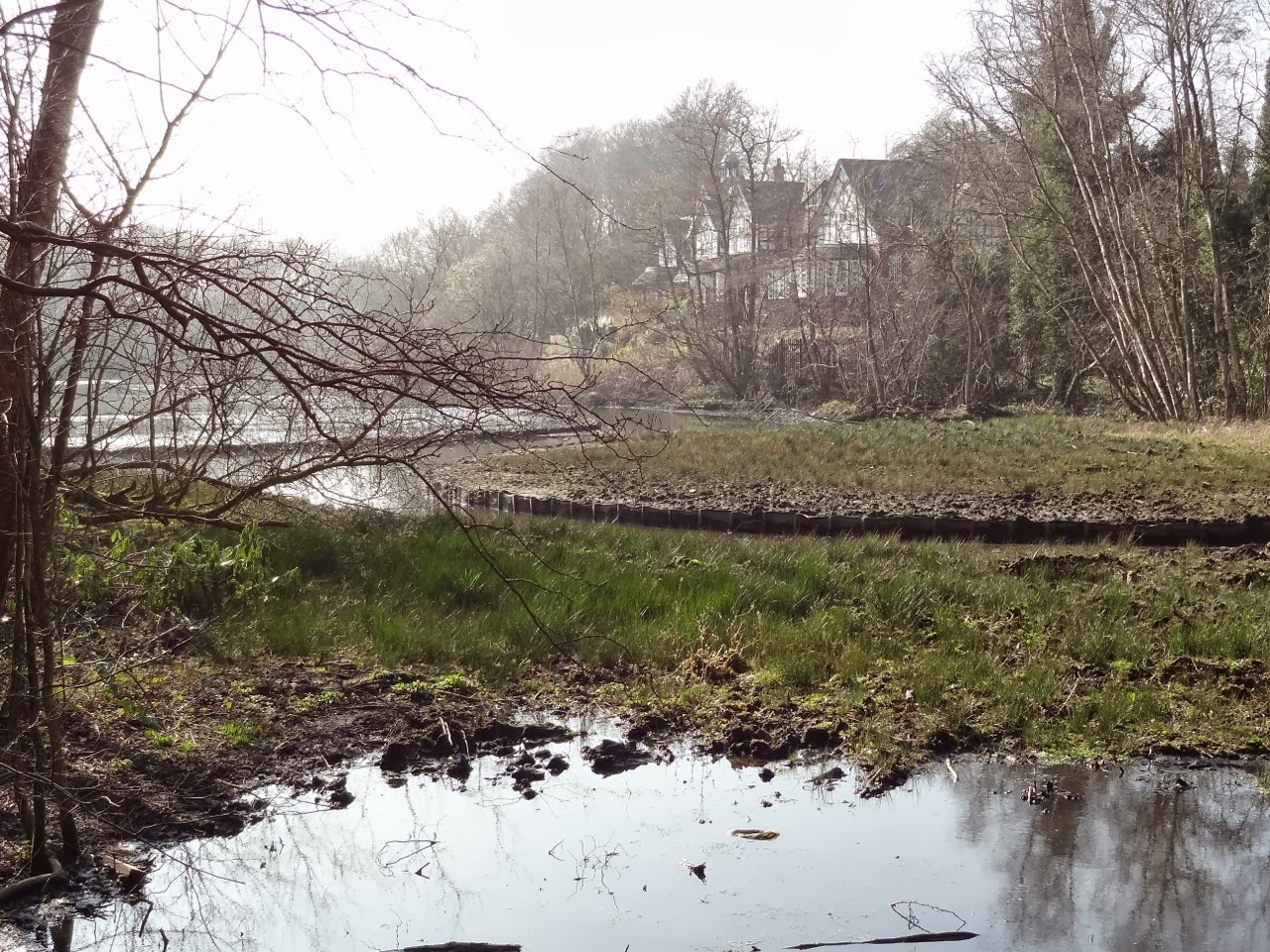 Once through the woods we picked up and followed the now disused railway line which runs down to Monton and which used to connect with Eccles. There used to be a wonderful railway station at Monton and i remember it being creme and red paintwork with very ornate fretwork. Alas now gone. 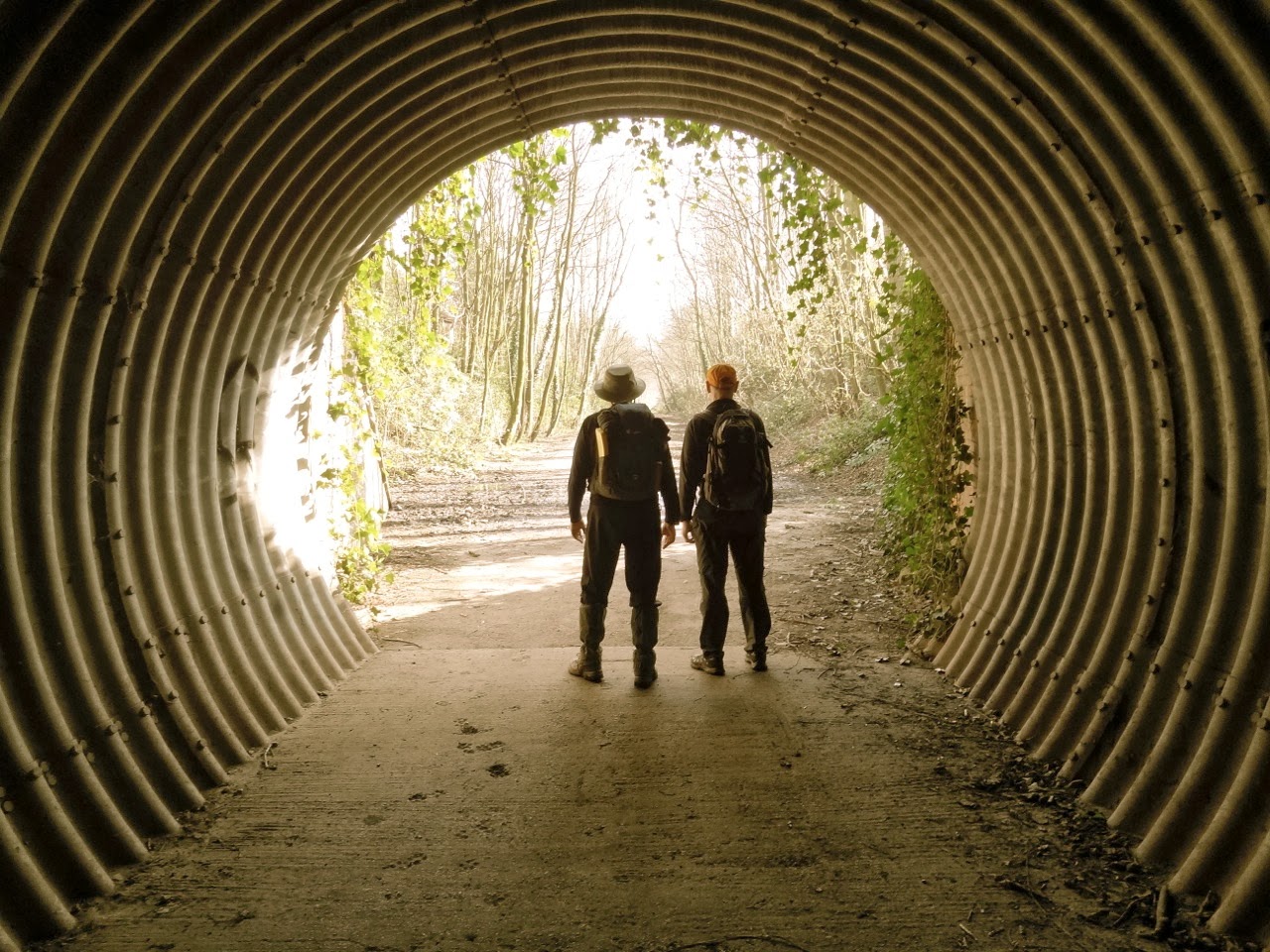 Heading back to Monton.
Martin let me take control of the rains at this point and instead of heading off back down the canal it enabled us to do a complete loop back to Eccles railway station and the tram back home. A brief wander around the Old Parish Church in Eccles before departing. 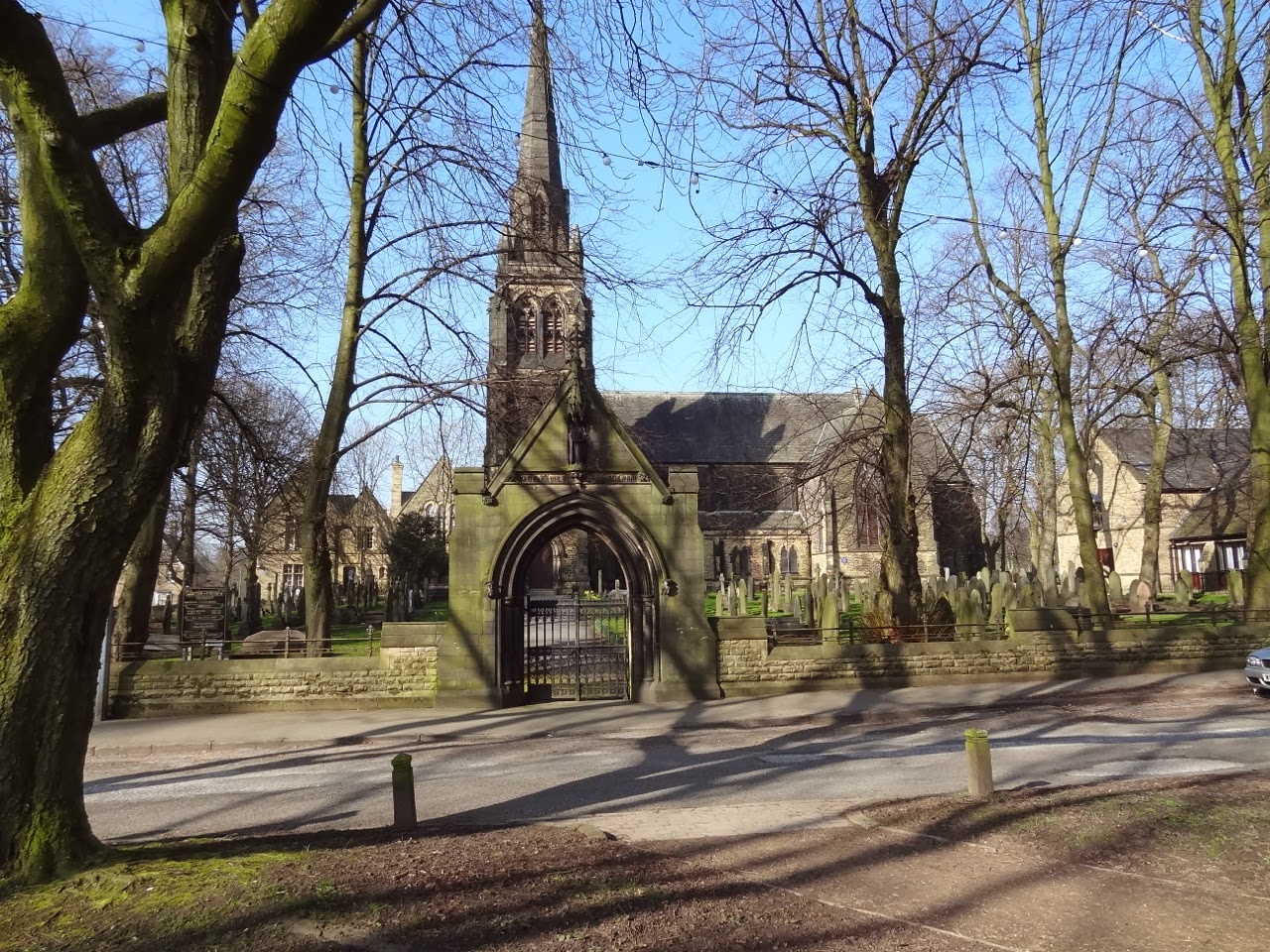 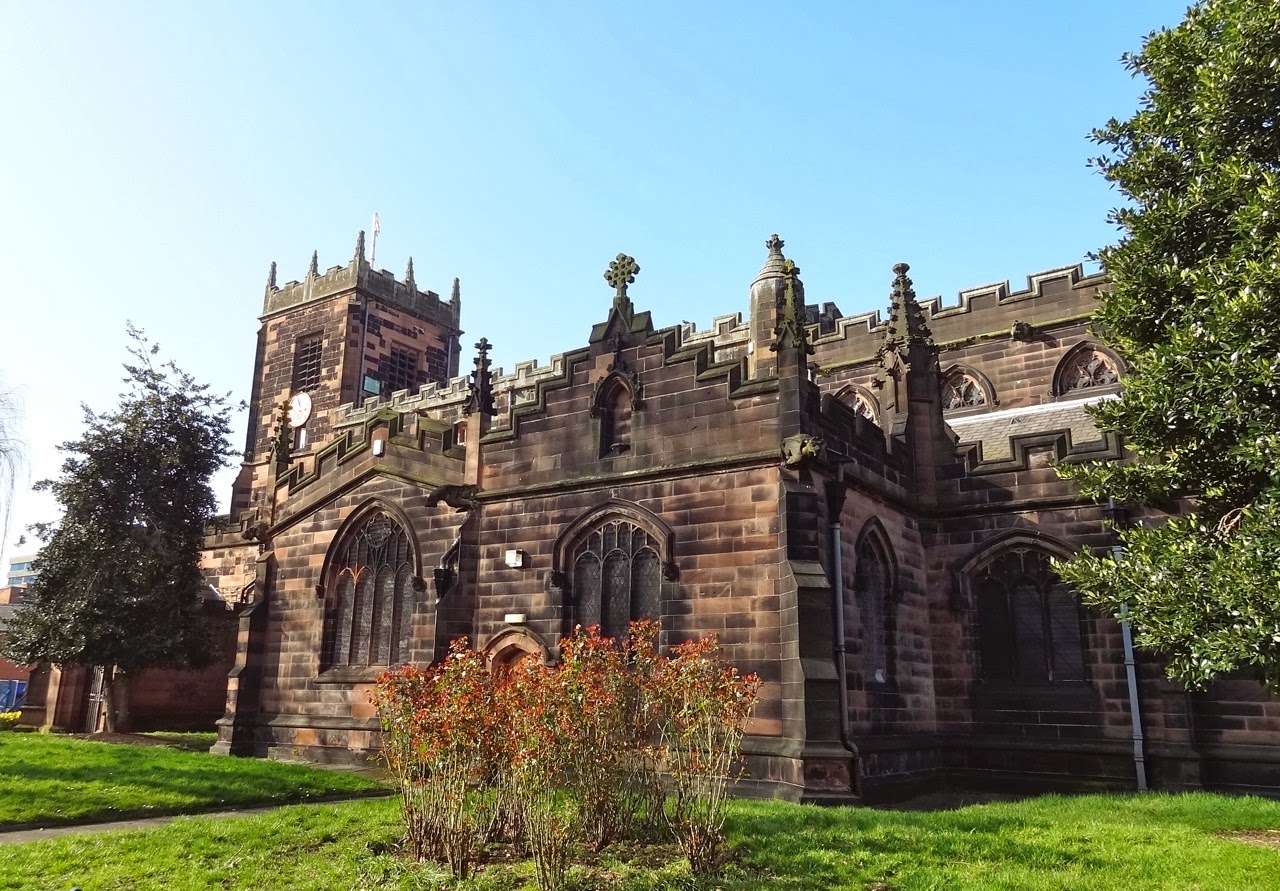 Well thats another day over and i can’t wait for the next one. We had a good time with lots of banter. Thanks Martin for organising it and i think we did about 10 miles but i’m sure your Garmin device will show a good map of the route and the distance accurately. 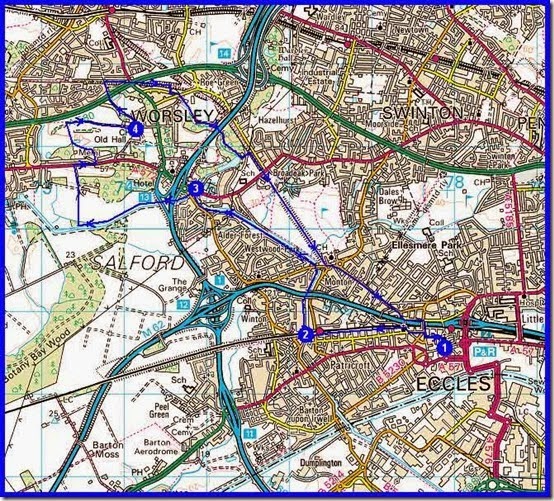 Map supplied by Order of the Bench.
Posted by AlanR at 12:37 PM

Gosh Alan, you do do some unusual, but interesting walks.

Wooo, sunshine, tractors, a walk and good company - what's not to like?

Nice one Alan. What a fine memorial bench! I know I'm not feeling very well, but isn't that a bit presumptive... ?

Yes it was good to walk in the sunshine although you will only have to imagine how good it felt. Ha.

Pity you couldn't make it JJ. A nice day out.

I'm glad I didn't say that.

What an interesting and informative post, and complemented by some really nice photographs Alan.

Very kind Gibson. Much appreciated. I must say the light was wonderful and it would have been hard to take a poor photo. Not that i am an expert or anything.