This weekend has just flown by. Unfortunately there was very little walking involved but we had an absolutely great time.
We had the opportunity of entertaining our friends Tina and Alan from Seathwaite in Cumbria. They live opposite lives to us townies. Living in what is a quiet and quite remote village for the Lake District, they find it a nice change to hit the towns occasionally.
So thats what we did. Friday night disappeared into a blur of Manchester pubs and restaurants. Quite a lot of Cumbria’s pubs are closing down due to lack of customers but Manchester is bucking the trend and more and more are opening. To say ALL the pubs we visited were packed is an understatement. I think Cumbria’s problem is overpricing in general, not just pubs but everything from parking to the price of hotels. A weekend away with a family can cost as much as a week in Greece. When will they learn? Probably never.

Then Saturday we booked into a hotel in Sale, south Manchester which cost a reasonable £56 a couple. We were heading to a concert at the Waterside Arts centre to watch Band of Friends.
Prior to the concert and to meet up with the band for a quick beer we tried a couple of Sale’s pubs. We met up with Sale Sharks rugby union lads who were doing some promotion business and so i paid a pound to have a photo with them. They were well on the way to rehydration. 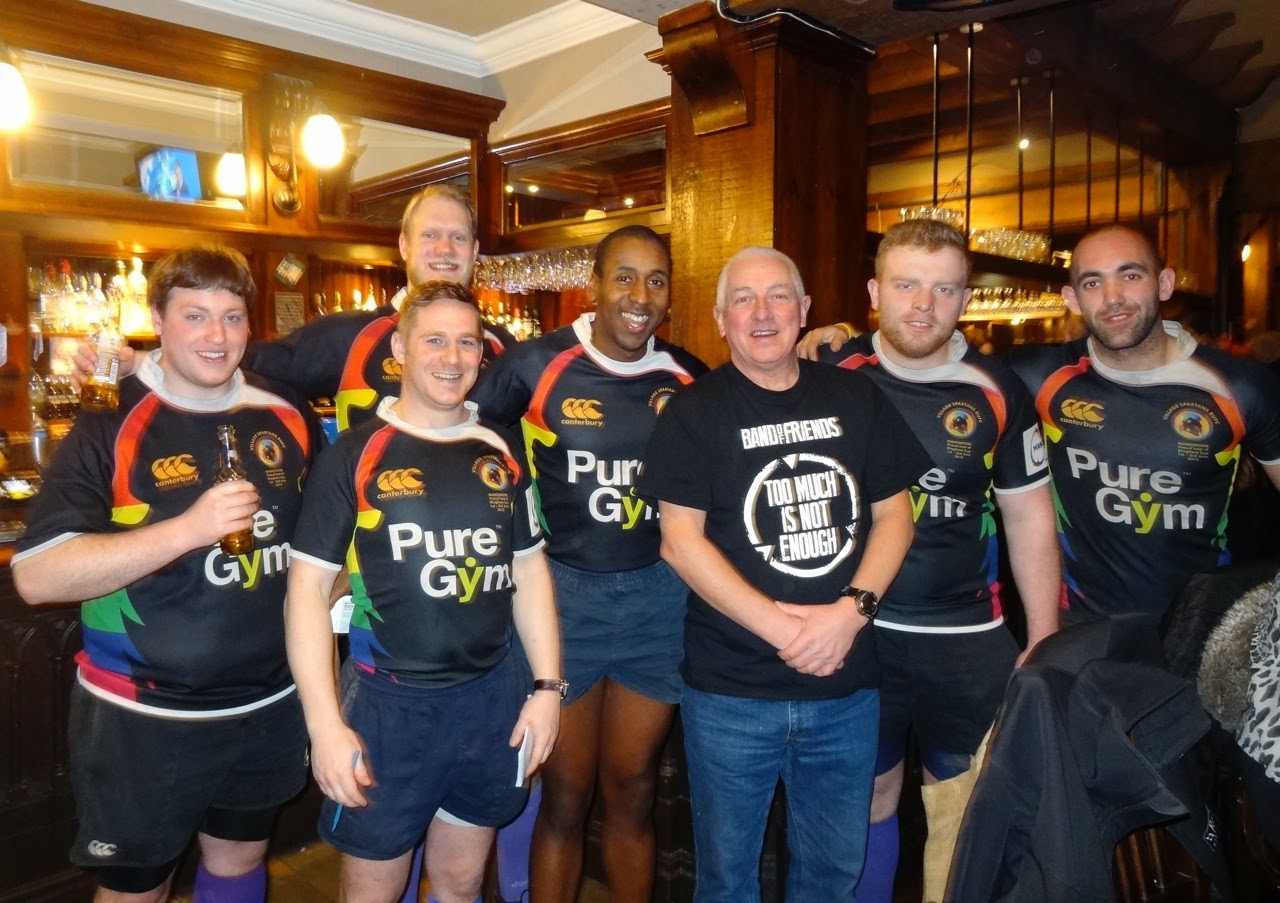 Sale Sharks RU
The gig started at 8.00pm and was a fantastic nights celebration of the music of Rory Gallagher. 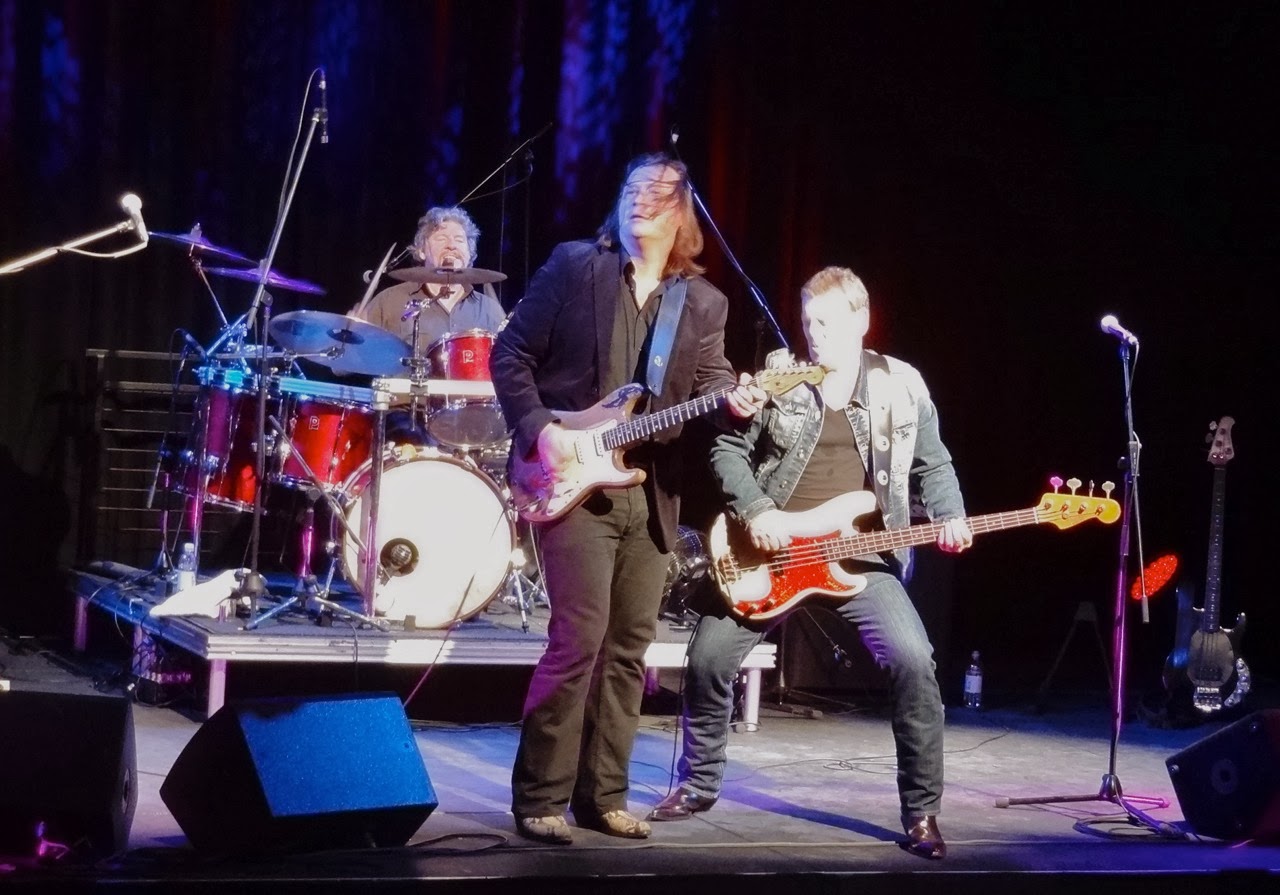 The Band of Friends. L-R Ted McKenna, Marcel Scherpenzeel and Gerry McAvoy.
Marcel’s guitar playing does have to be heard to be believed. It’s as close to Rory’s as you can get.
We really enjoyed it.

Post the gig, the band and us four headed off for a curry and a wine or two. We had booked a late table at Zumar Indian restaurant only a couple of minutes away from the Waterside. Even though it was late, the staff and the food was excellent. Mine in particular, Lamb Tikka Balti was the best i have had. Even better than the fantastic curry we had on one of our border walks in Dunbar. It was that good.

There was no rushing us along and i think we left at around 1.00am. But it might have been a little later. Time flies when your having fun.

Thanks to Sheila, Tina, Alan, Ted, Marcel, Gerry (and Sale Sharks) for a memorable weekend. We will catch up again soon.

Time does indeed go fast Allan. I can't believe it's nearly 50 years since I saw Ted McKenna thrashing away in the Dream Police at the Kinema Ballroom in Dunfermline.

Good to see that you were contributing to our local economy whilst we were away in Wales. The Waterside and Zumar are both good spots, and the King's Ransom.

I think between us we spent enough to bring the council tax down a few quid. I havn’t been in the Kings Ransom for 10 yrs or so and i recall it being a bit of a poser’s palace so i wasn’t particularly looking forward to paying the prices. We were pleasantly surprised that it wasn’t ridiculous and not packed. Zumar was wonderful.

The language was a bit difficult at times.

I know the feeling. Whilst in Wales we were subjected to a Very Brummie Waiter for the weekend. Curiously no sign of any eastern Europeans though...

Judging from the pictures (and the text) you had a good time! It's good to have some variation in life. Walking is important, but it's not all...