Arrival at our meeting place on Friday evening had been a pleasant drive along the A55 to Caernarfon and through to Caethro where we had a fairly substantial accommodation booked in the guise of a converted barn.
Folk were arriving from South Wales and London and the last ones landed on us at around 8.45pm. In all there were 12 of us and one lovely killer dog named Gilli. (He was nice really but he is a lurcher cross and therefore doesn’t hesitate at the sight of sheep, cats, and anything else to give chase. Because it’s lambing time in Wales, most of his day was spent on an extending lead.
The party included, Sheila and I, Richard and Hazel, Teg and Julie, Lynn, Gary, Lewis and Myna, Steffi, and Huw.

Friday evening was full of chat about the last twelve months, a few beers, a discussion about the plans for Saturdays walk and a cracking sunset. 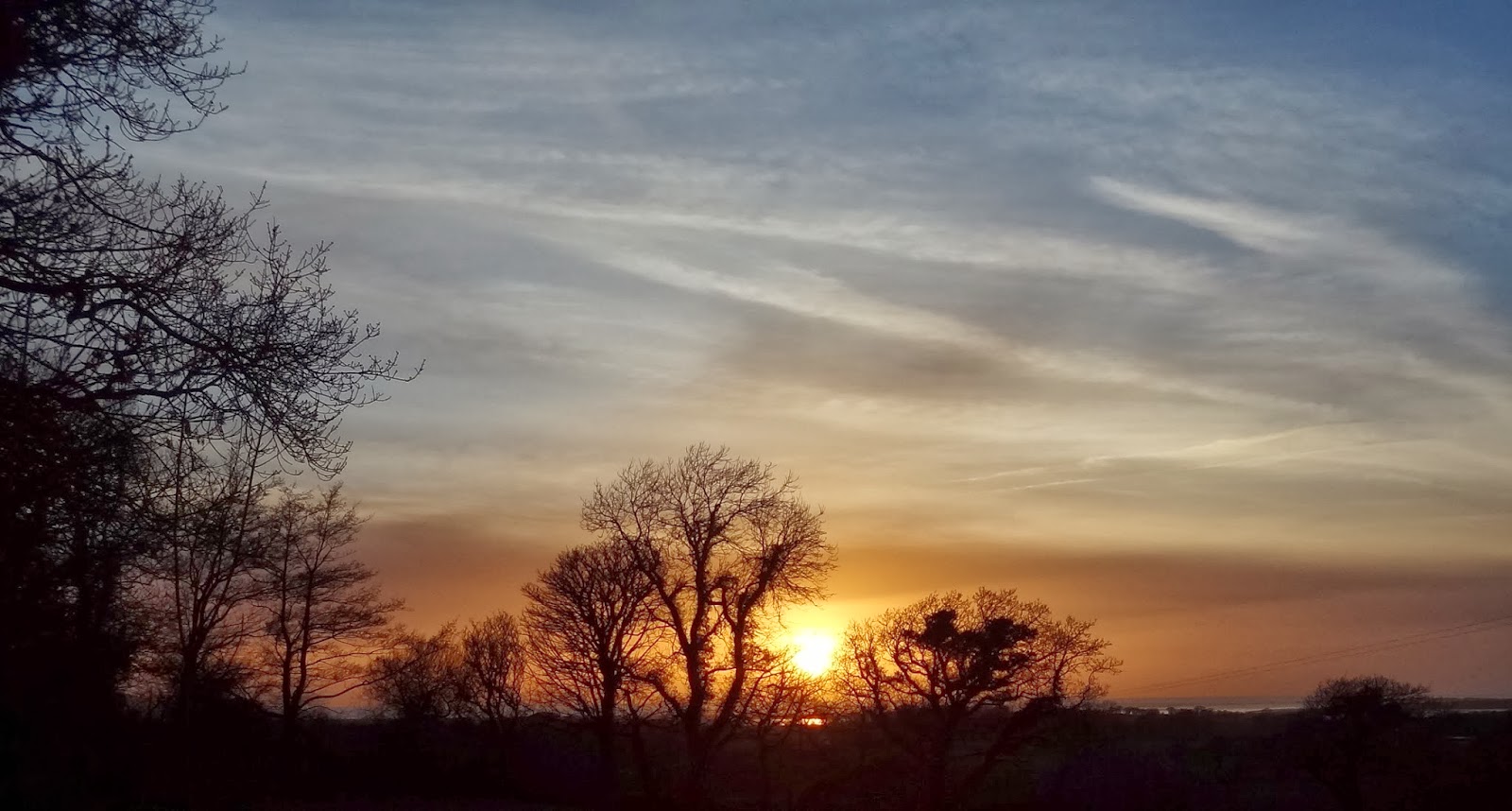 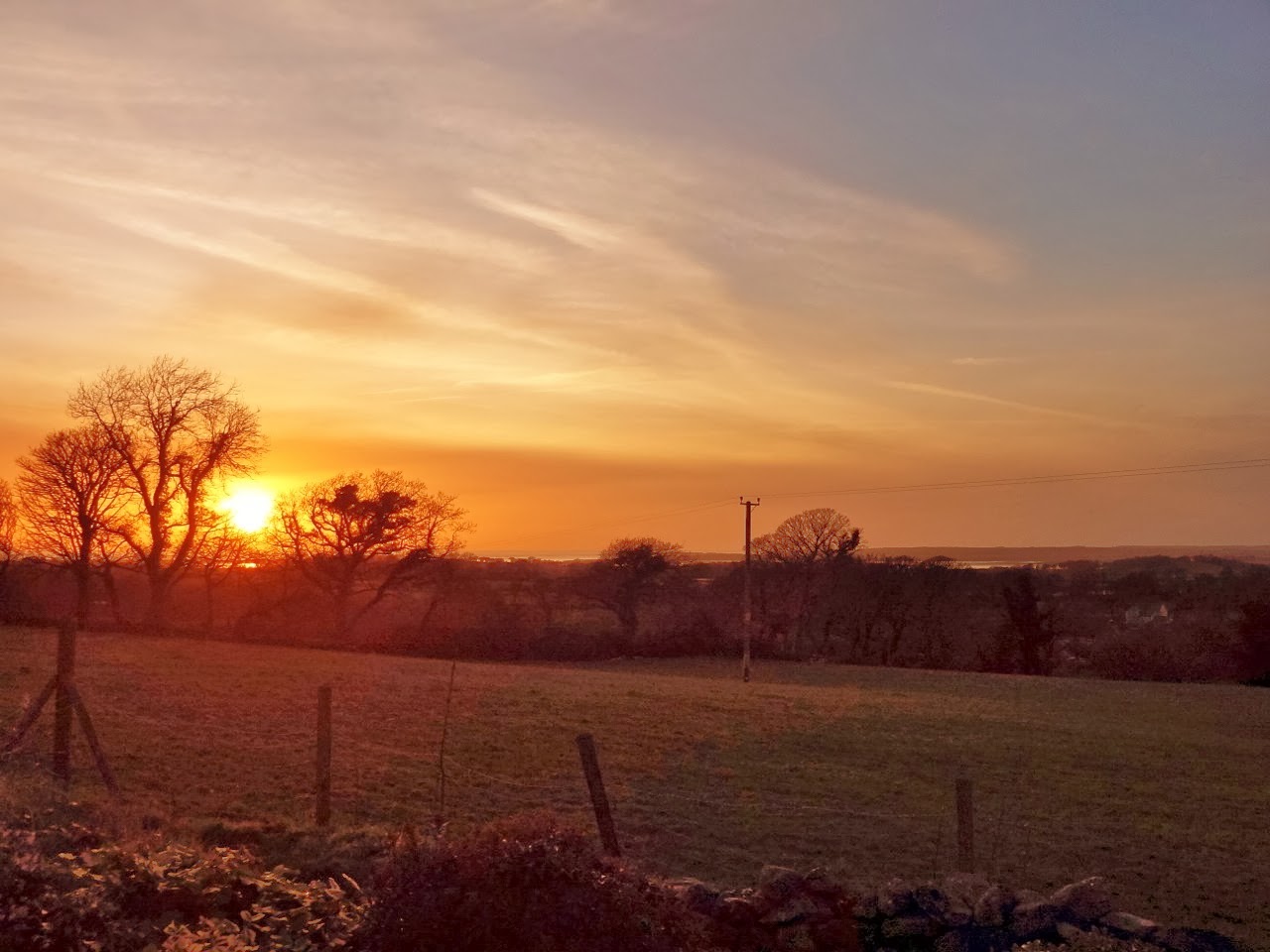 The route was decided upon after a review of the weather forecast from Met Check the MWIS and YR.no. As it came to fruition the MWIS was the closest although YR expresses its wind speed in metres/second which means nothing to me. Although i know what it means i cannot visualise the effect as well as mph. I will have to get a conversion. (Amendment: 1m/s = 2.24 mph).

Saturday dawned dull and exceptionally windy. 30mph winds with gusts in excess of 40mph. The day would clear leaving good visibility but the wind would be fierce all day.
We decided that it would be better to leave the Glyders for another time and do some less high tops. It proved a good decision because at some points we were being blown off our feet.

We started our day at the car park in Capel Curig and headed off in an easterly direction behind the church to the footbridge below Clogwyn Mawr. 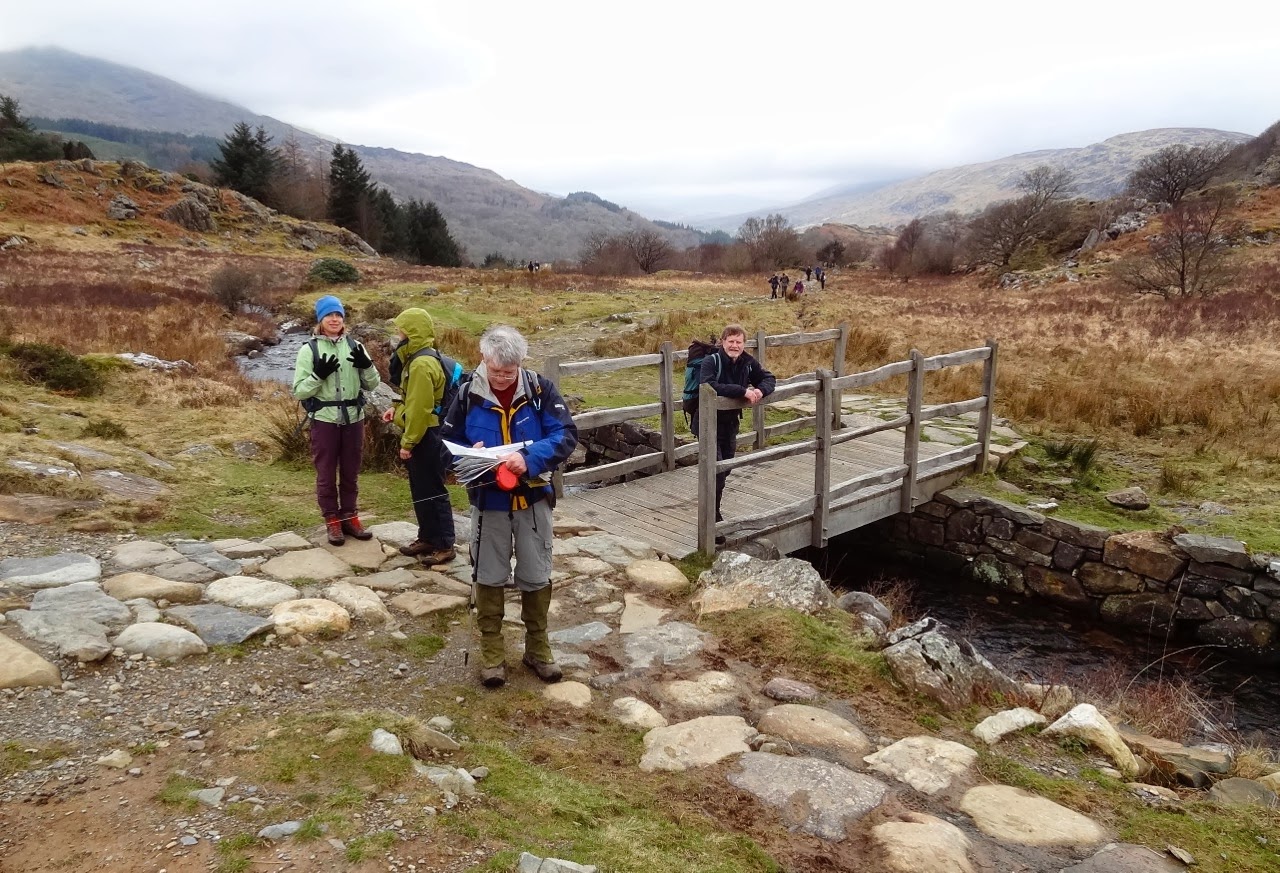 The party already strung out with Richard checking directions and Teg (leaning on the bridge rail knowing where we were going) letting him check. At this point we had been passed by quite a few fit looking fell runners and numerous dogs.
Across the fell a farmer and numerous dogs were rounding up Ewes to bring them down to the intake fields for lambing. Poor old Gilli was not happy being tethered. Then to our surprise a Hen Harrier flew low and fast contouring the hillside. 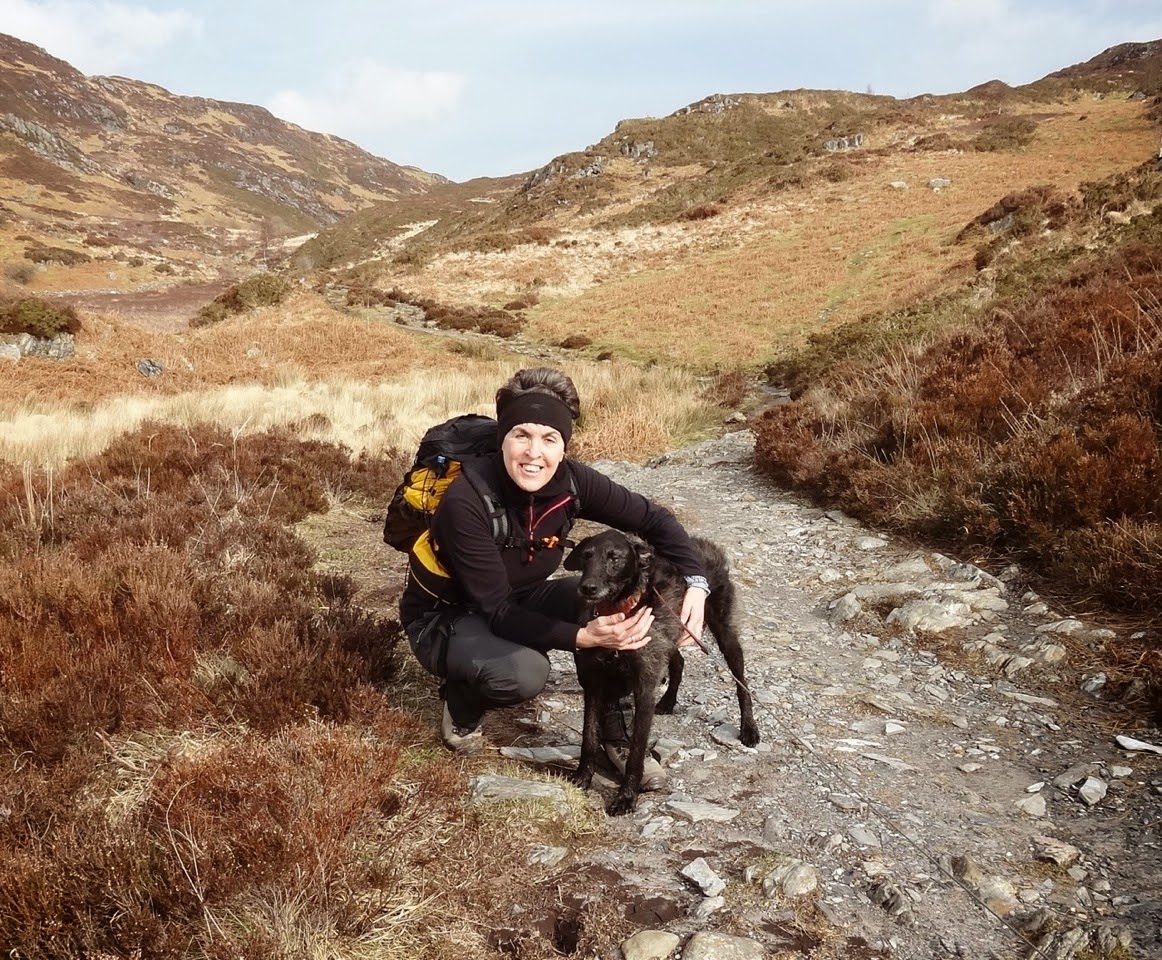 Gilli with Sheila
The track heads north and although not on the map there is a track off to the west that rises steeply to gain the top of Crimpiau at 475 metres. Crimpiau means “Fine high ridges” we were told, and it doesn’t let you down with great views. Especially Moel Siabod to the south. 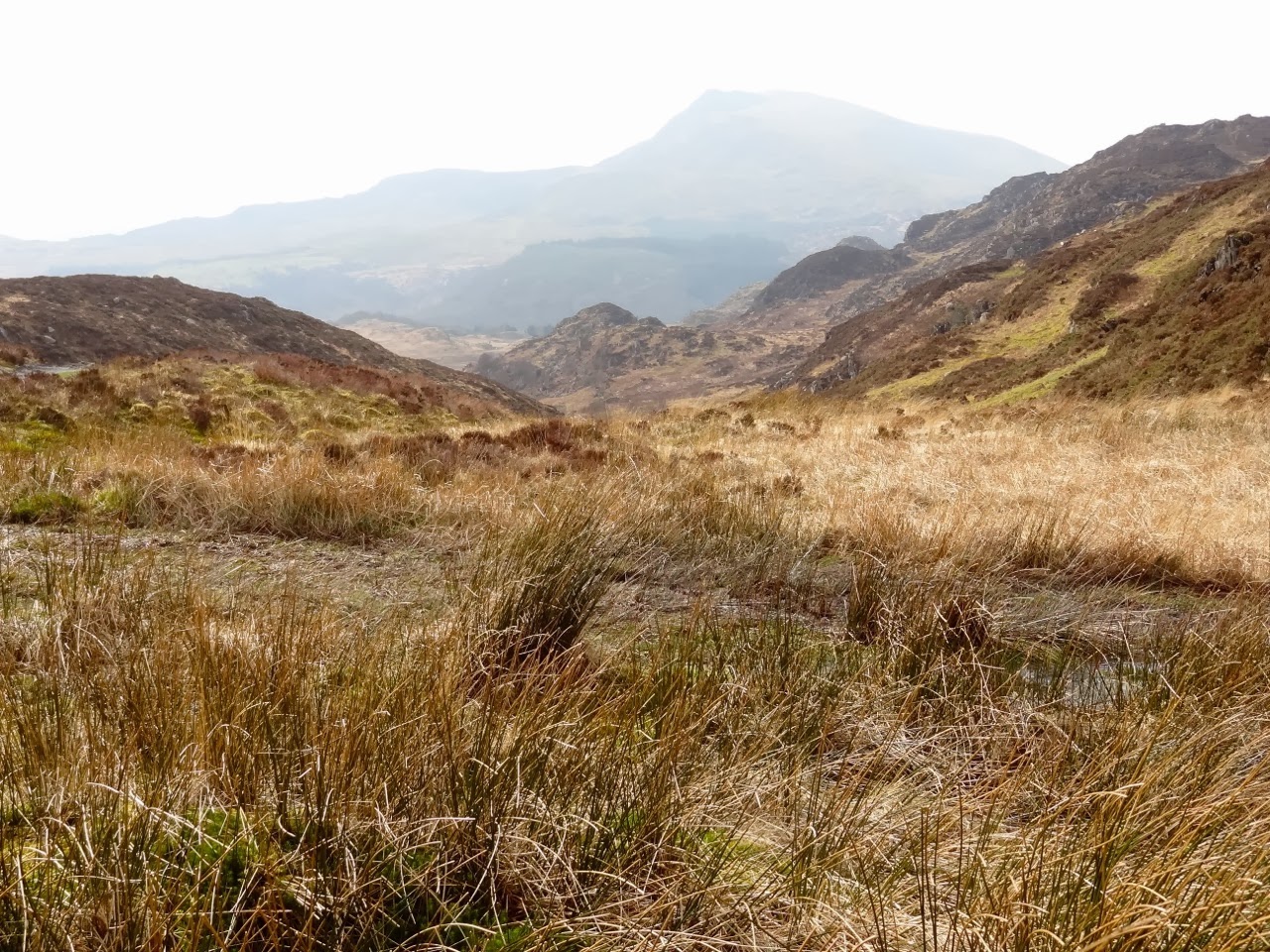 On the way up to Crimpiau with Moel Siobad in the misty background. 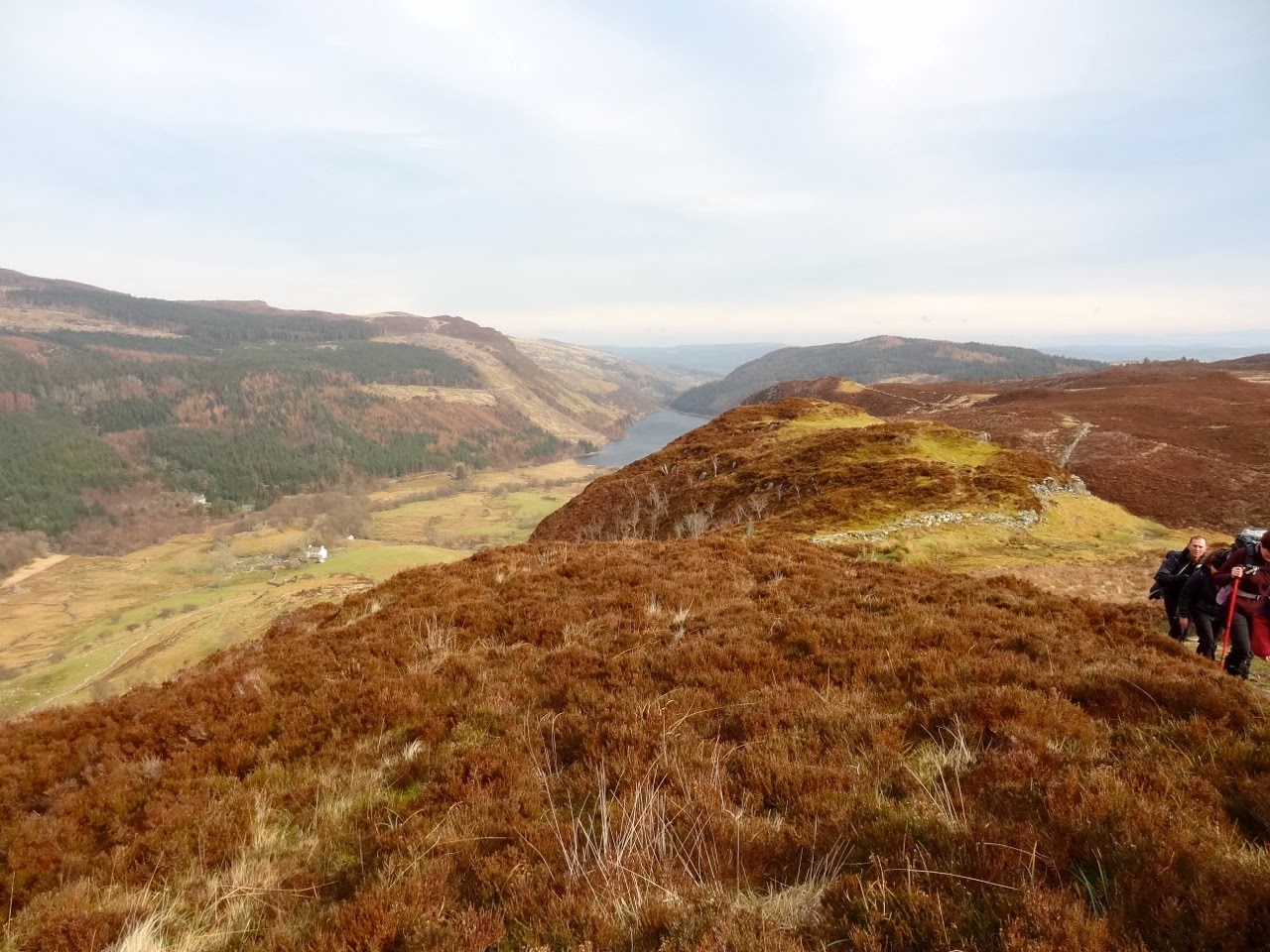 Height gained quite quickly with the help of the strong wind.The reservoir Llyn Crefnant appearing. 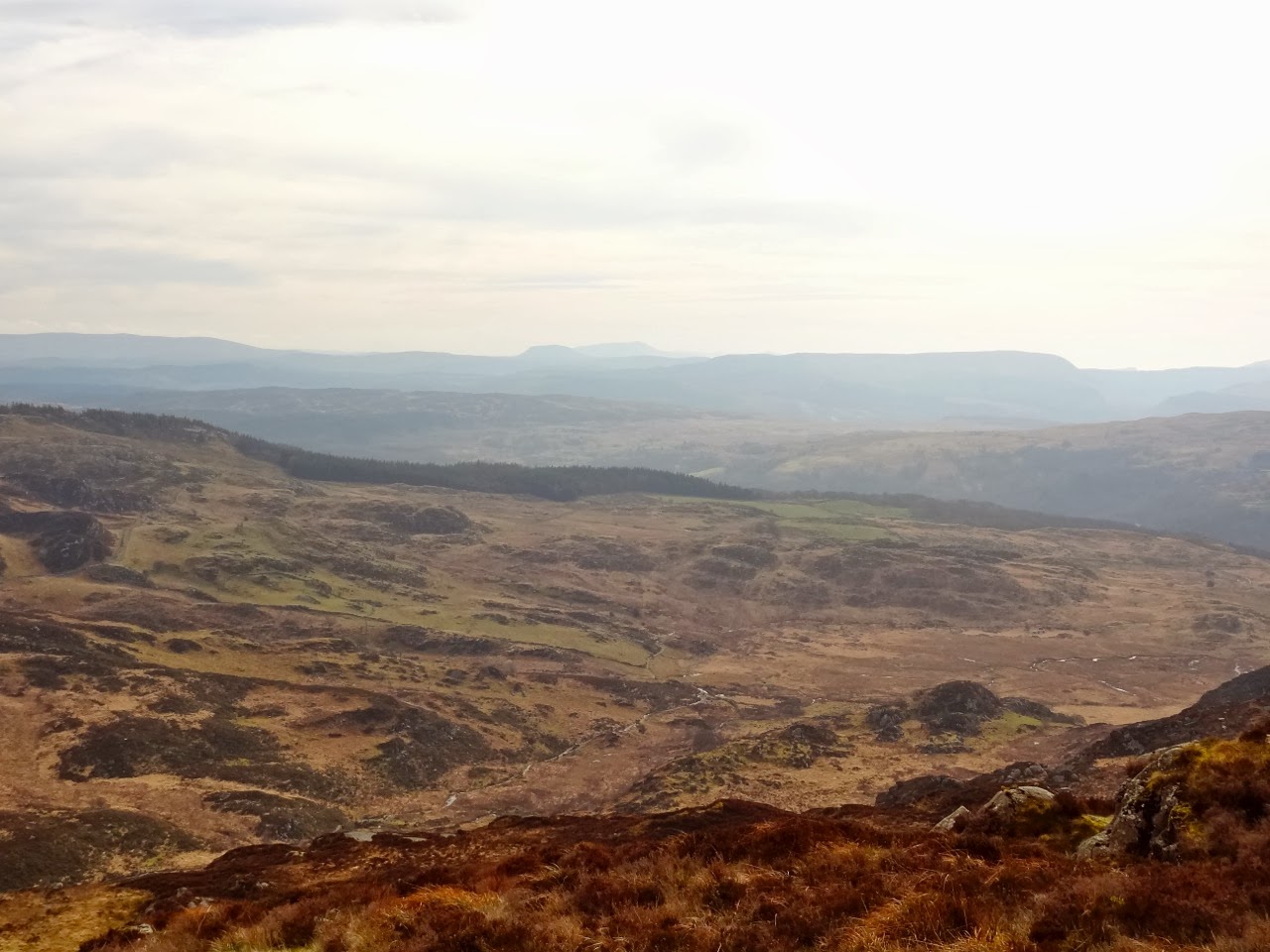 Wilderness to the North 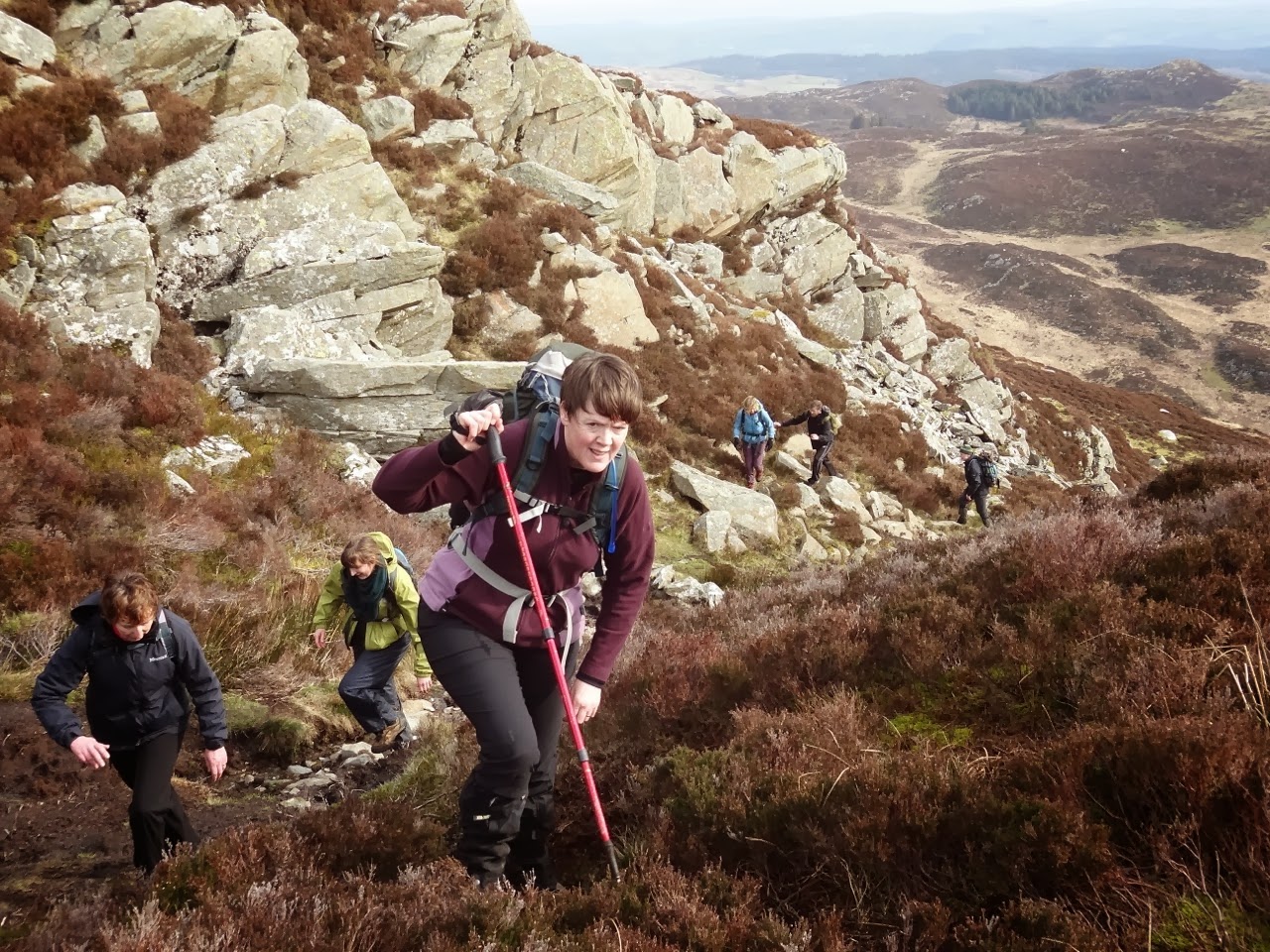 Our approach to the summit up a steep rake. 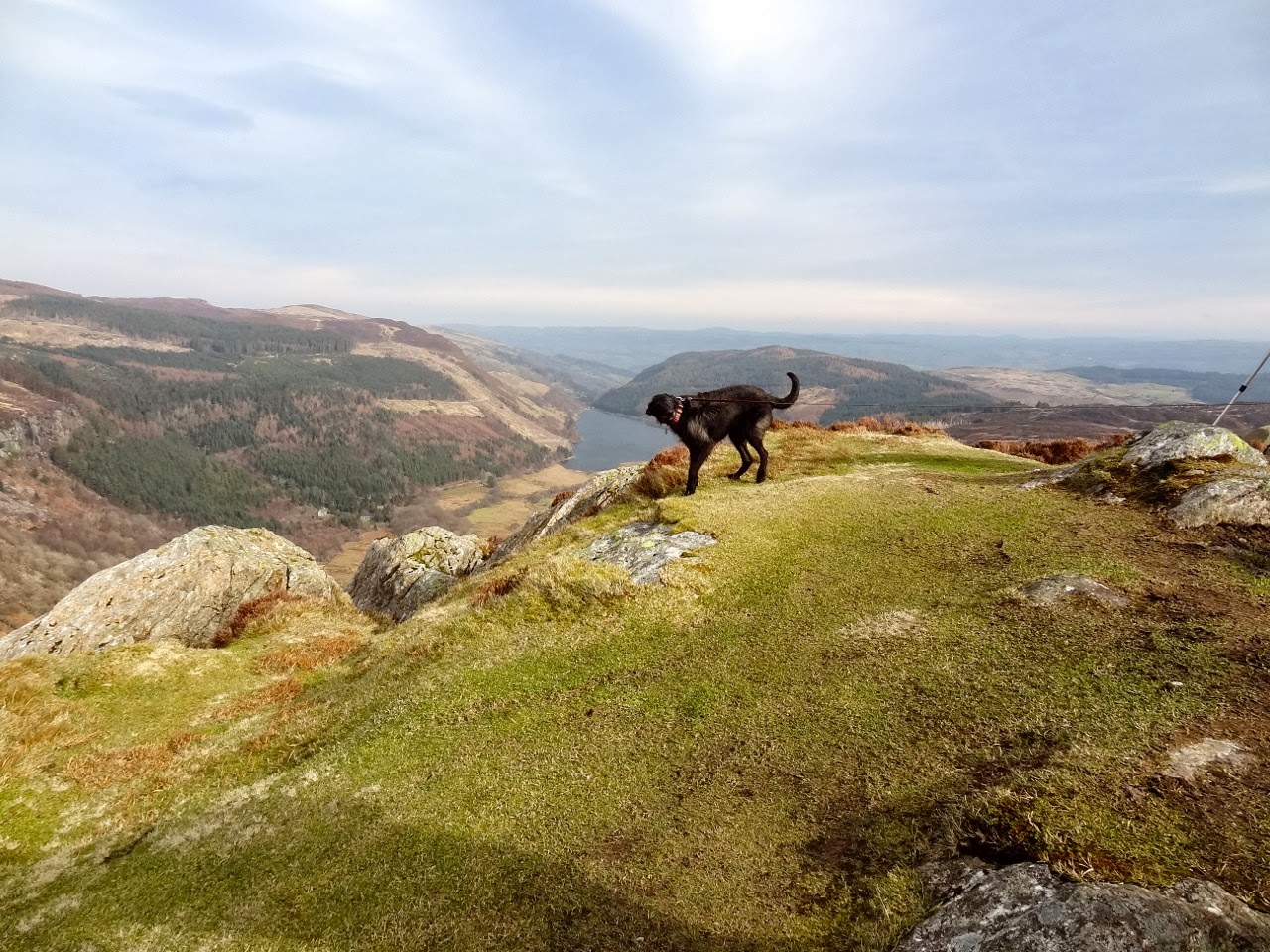 The summit. 475metres
Although the day itself was quite mild for this time of year the wind made it feel chilly. One minute the gloves and hat were put on and then we would hit a sheltered spot and they would come off again. 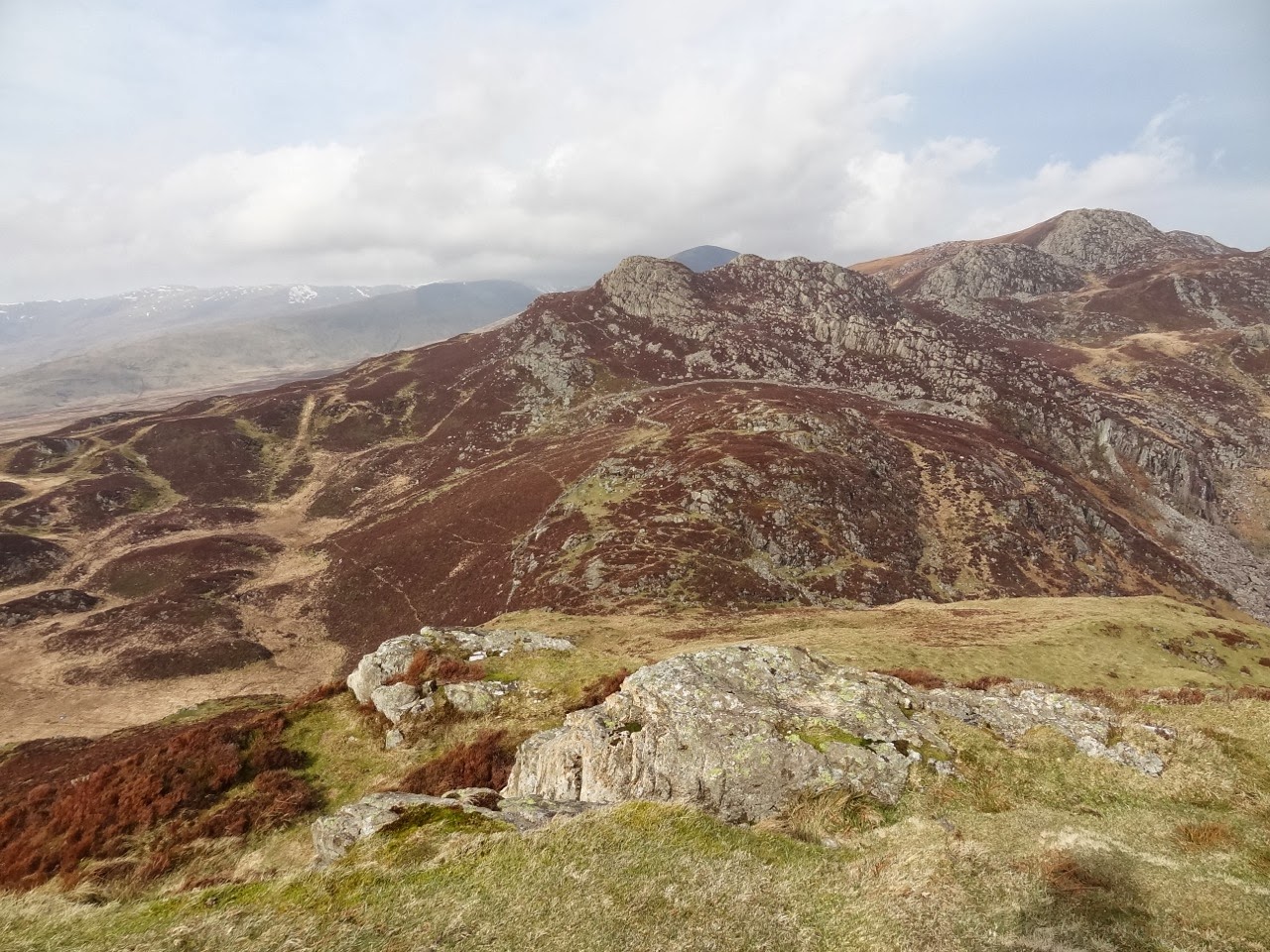 The view in front was our next top . The large crag in top centre, Craig Wen being the start of an undulating ridge to Creigau Gleision which runs parallel to the Llyn Cowlyd reservoir. 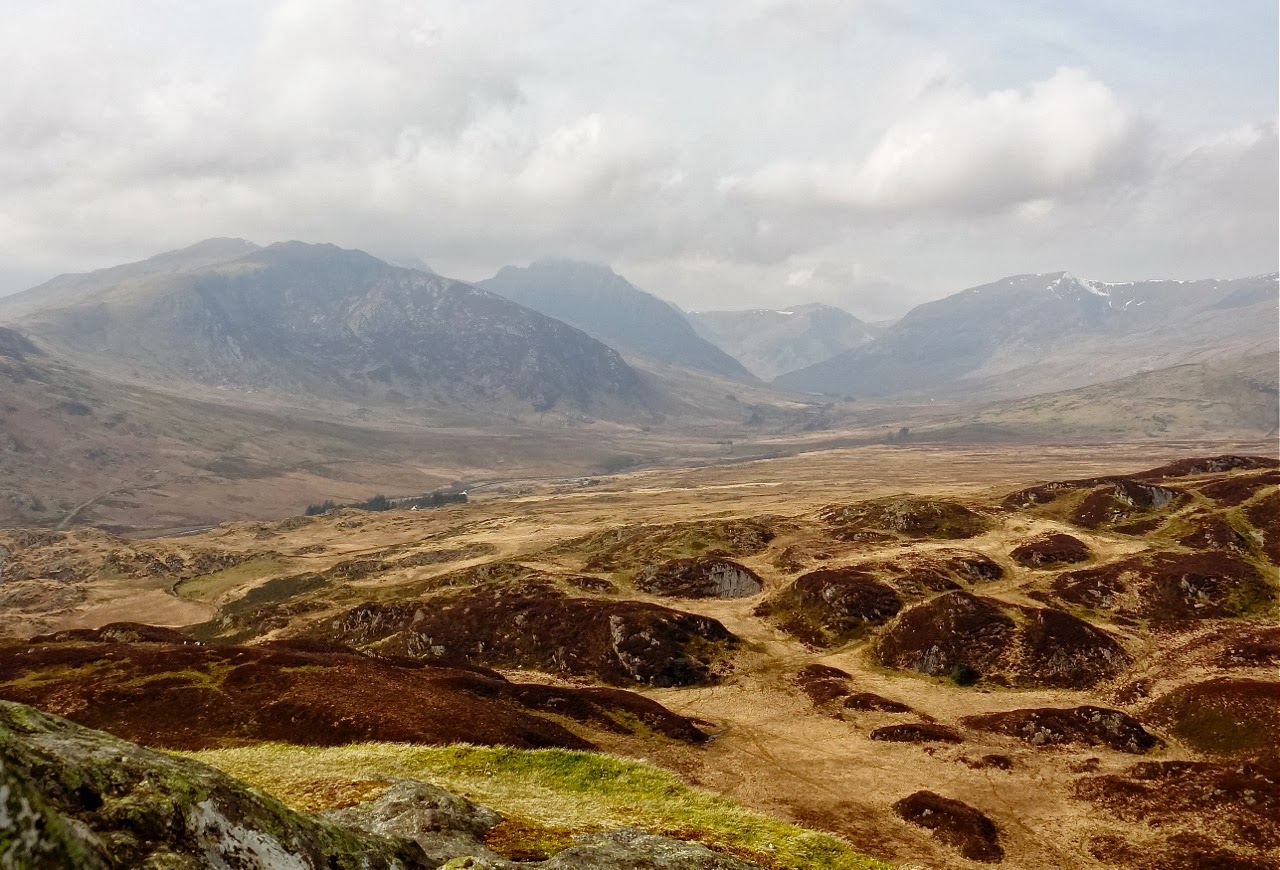 The spectacular view from Crimpiau of The Misty Glyders, Tryfan and Pen-yr-ole-wen. 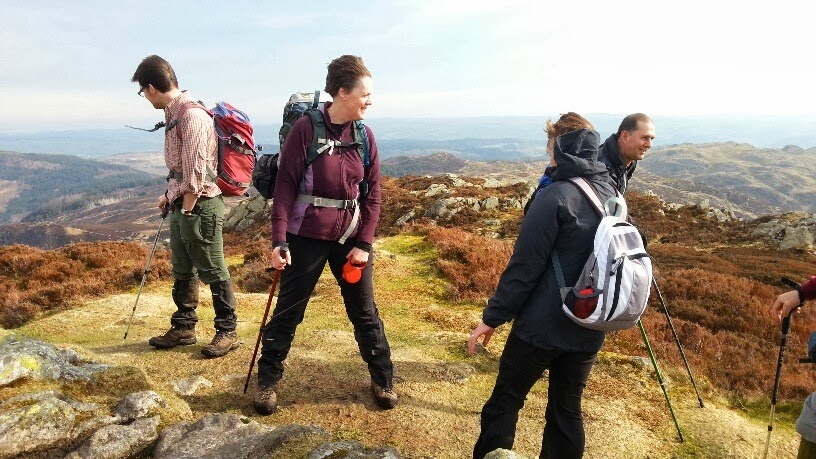 The strong wind on top of Crimpiau. (Taken with phone)

We had to give up the high ground to make our way across to Castell y Gywnt crossing a wall or two before climbing again. Some wanted to stop for lunch as it was 12.15pm but it was so windy. We thought if we climbed a little higher we could get behind some crags in the lee of the wind, but it wasn’t to be. The wind was swirling and you had to hold onto everything, if the wind had have caught anything it would disappear without trace.
After some fruitless searching for a good lunch spot we just got down into the heather and sheltered as best we could. 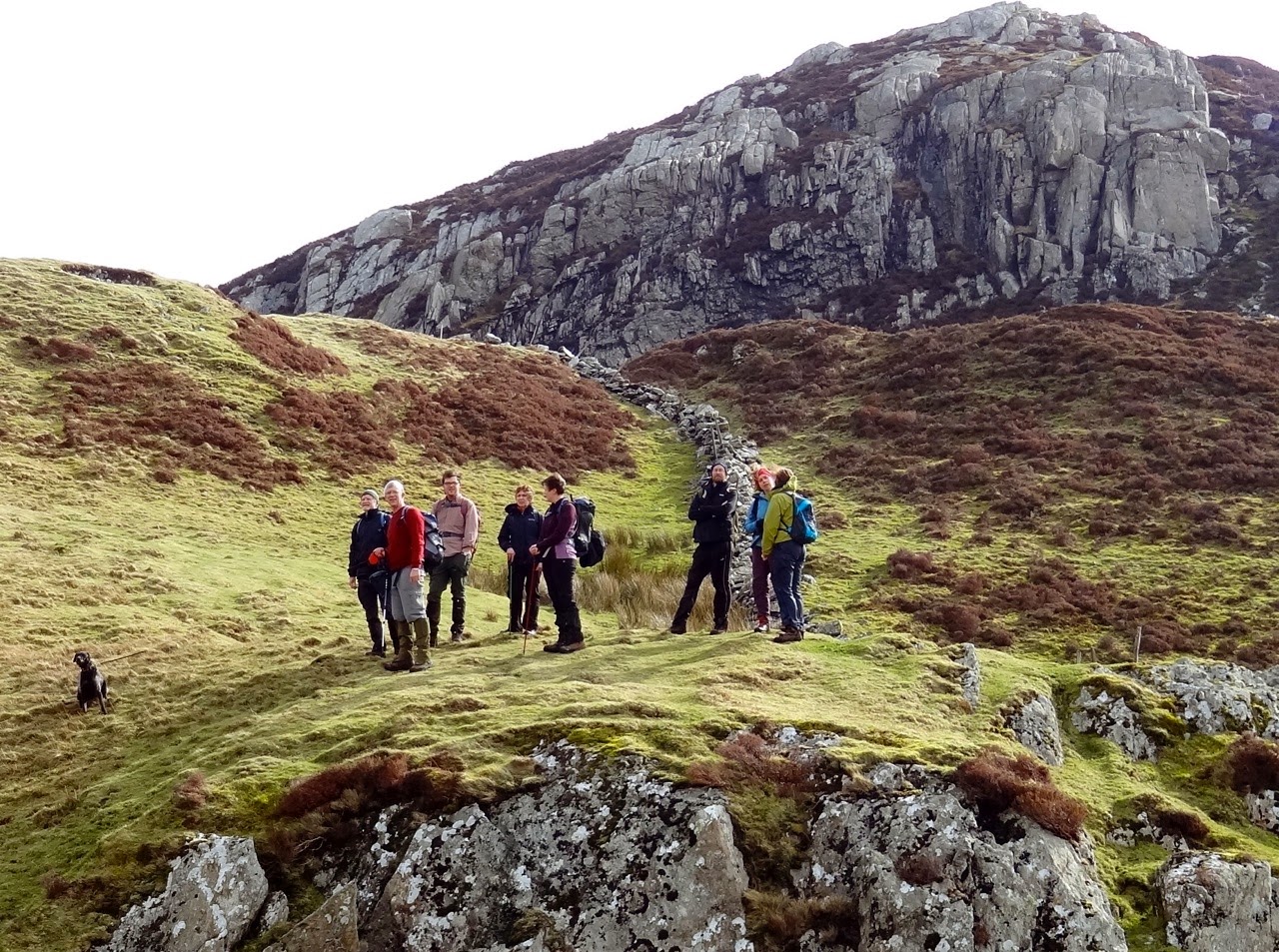 Coming down from Crimpiau and a brief lull in the wind. 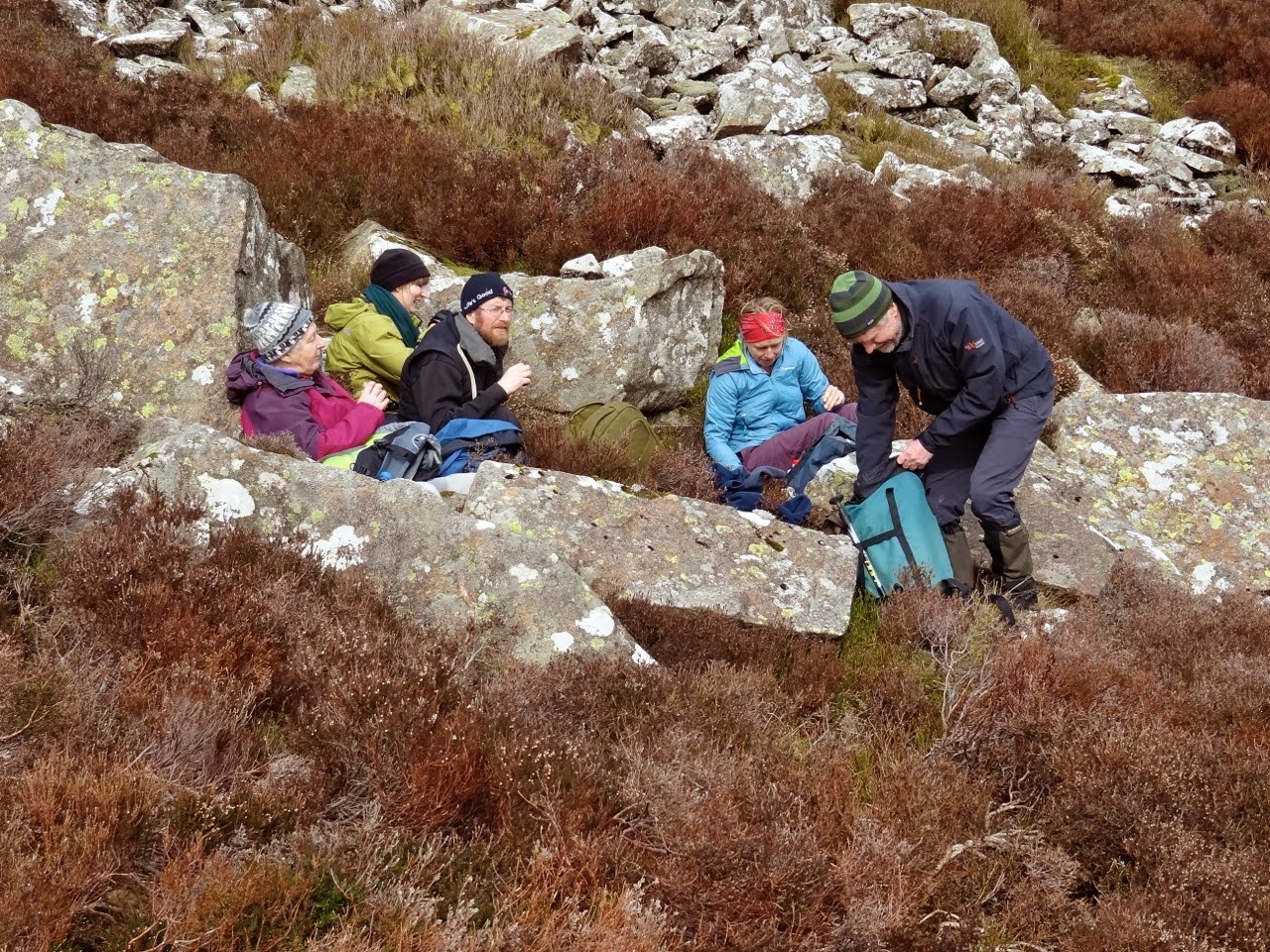 Lunch
At lunch i checked the route on the Satmap GPS and in just over 2 hours we had covered the ridiculously small mileage of 5km. It just shows how strong the wind was. 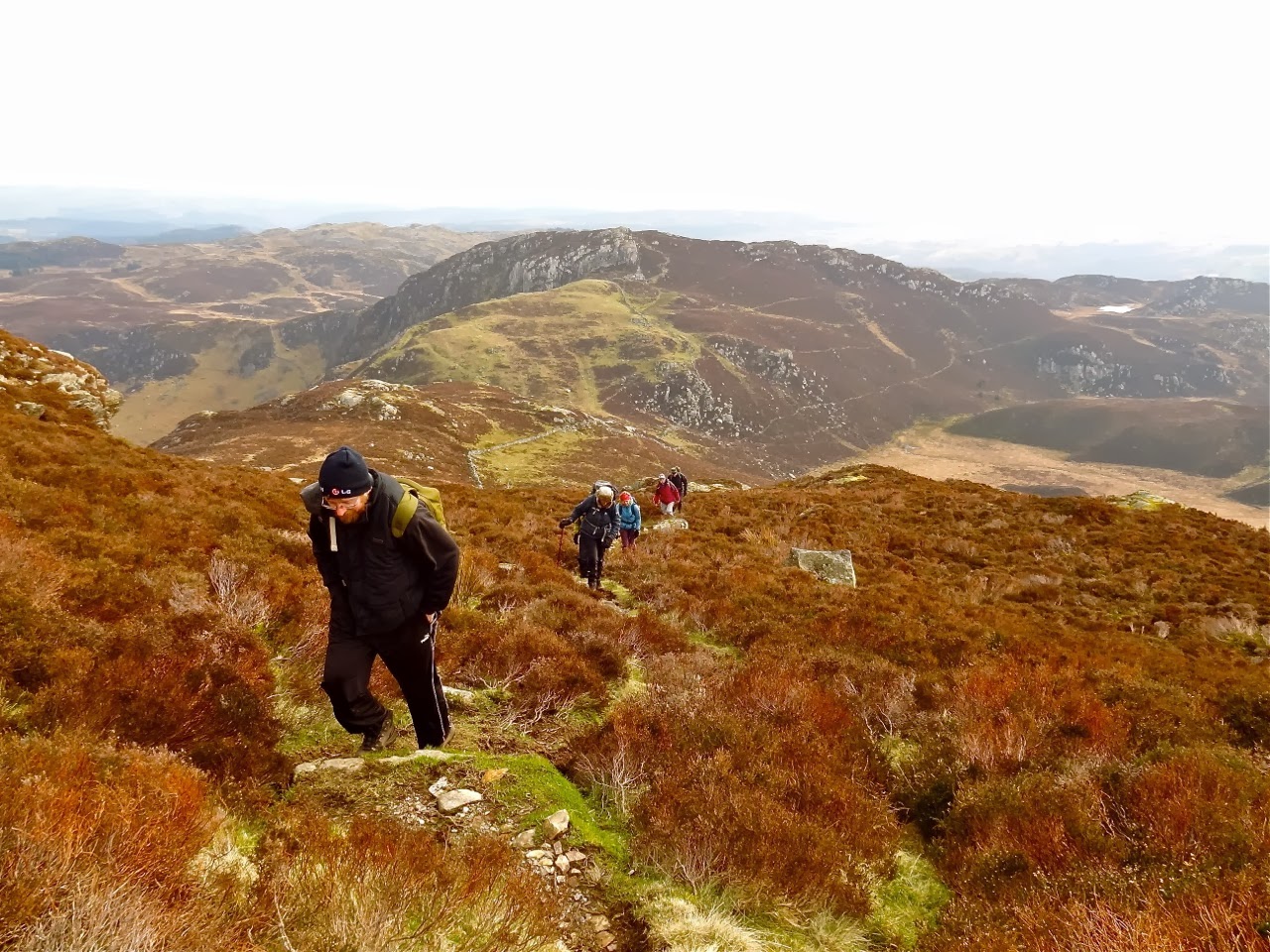 Climbing again. Crimpiau in the background. Approaching the top of Craig Wen.

Just before the top we headed a little more west towards the edge in order to get a view down the Llyn. But to achieve this we had to drop down a little too far and so we aborted this idea. However the view across to Tryfan was impressive. 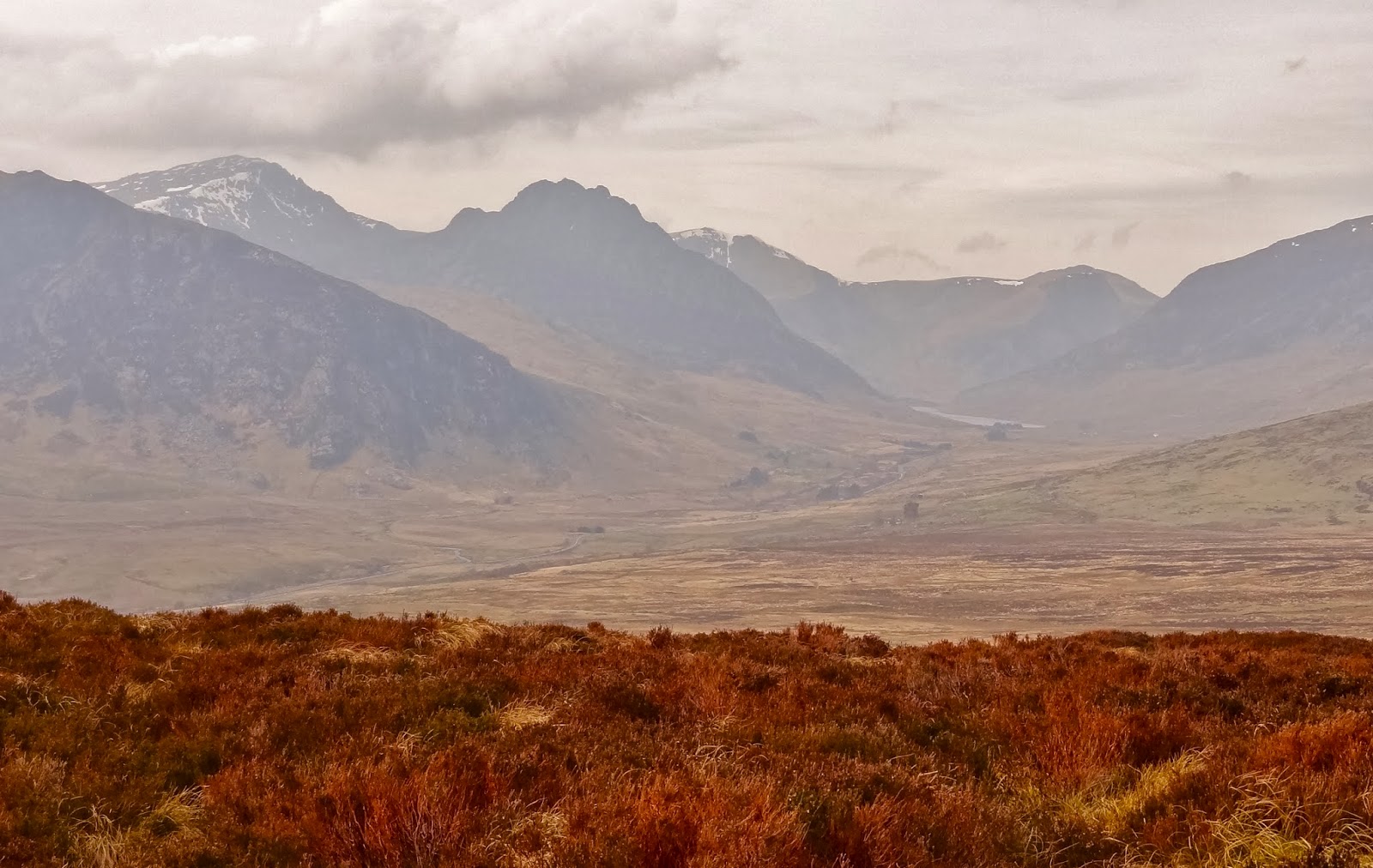 Tryfan - centre and Llyn Ogwen.
Once on the ridge the wind force was quite something, blowing us over on occasions. It was easier walking just lower than the actual summit points but to get views of the Llyn we had to take the chance. There was no real danger, we wouldn’t have been blown off the tops but talking was difficult and holding the camera steady even more so.
So i was pleased with the results of the pictures of the Llyn and the dam. Highest point being 678 metres. 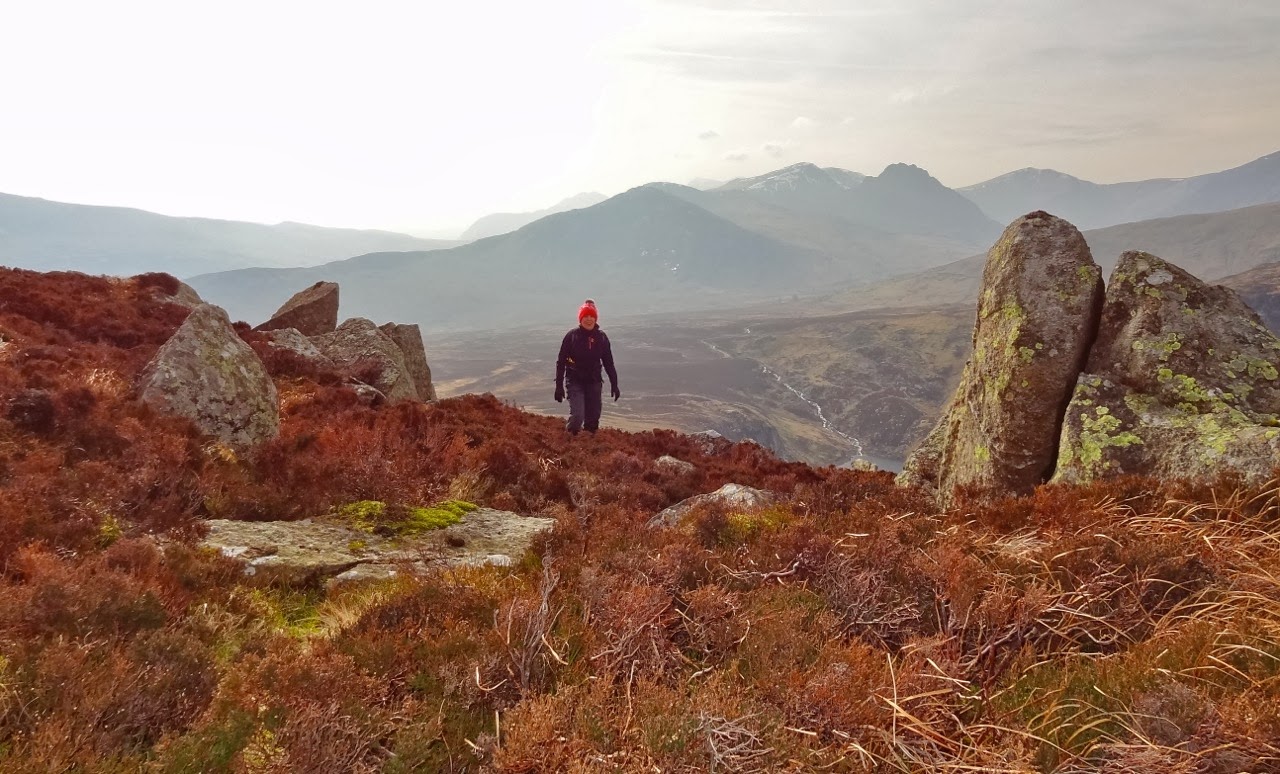 Sheila approaching the southern top of the ridge. 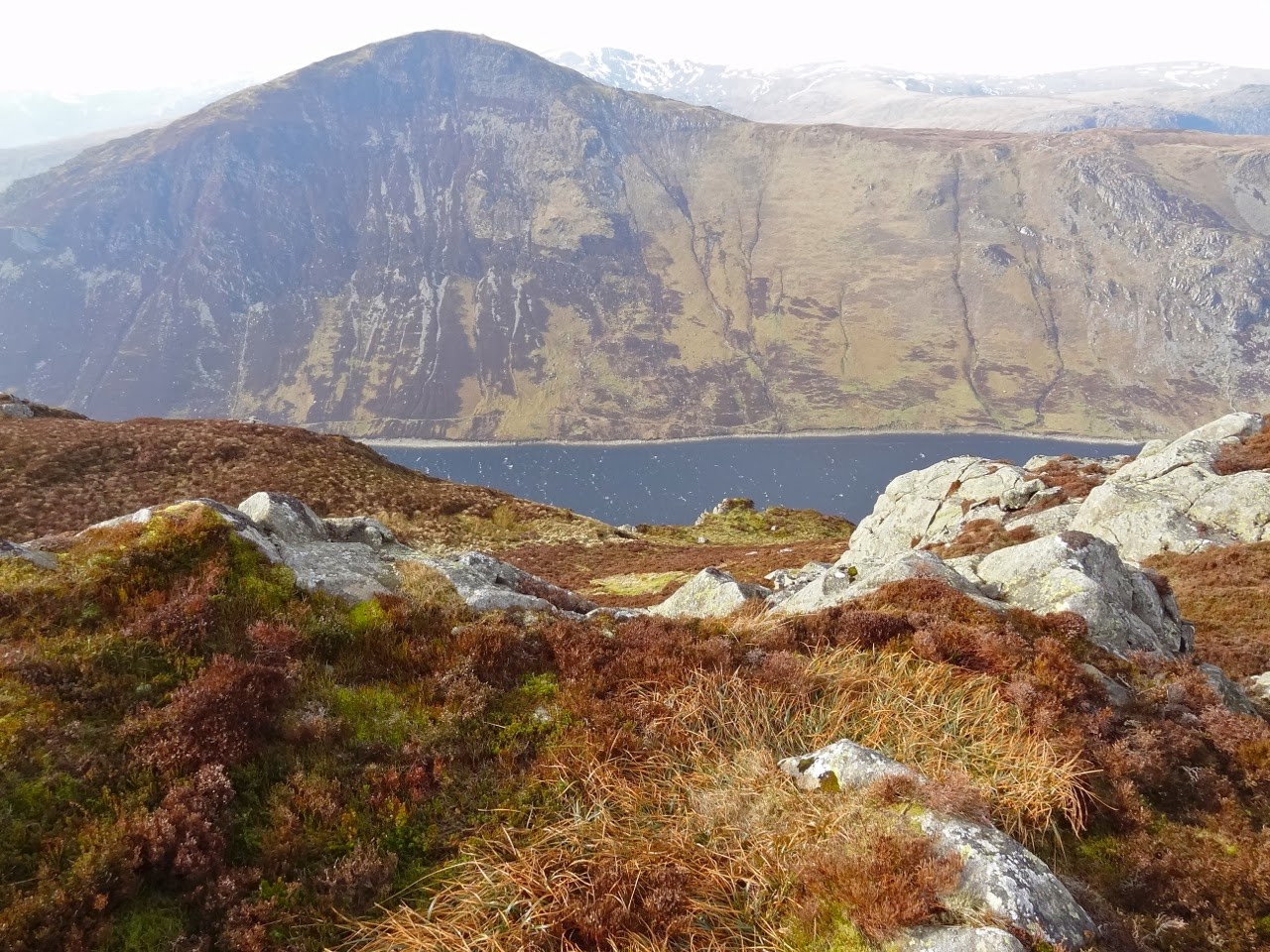 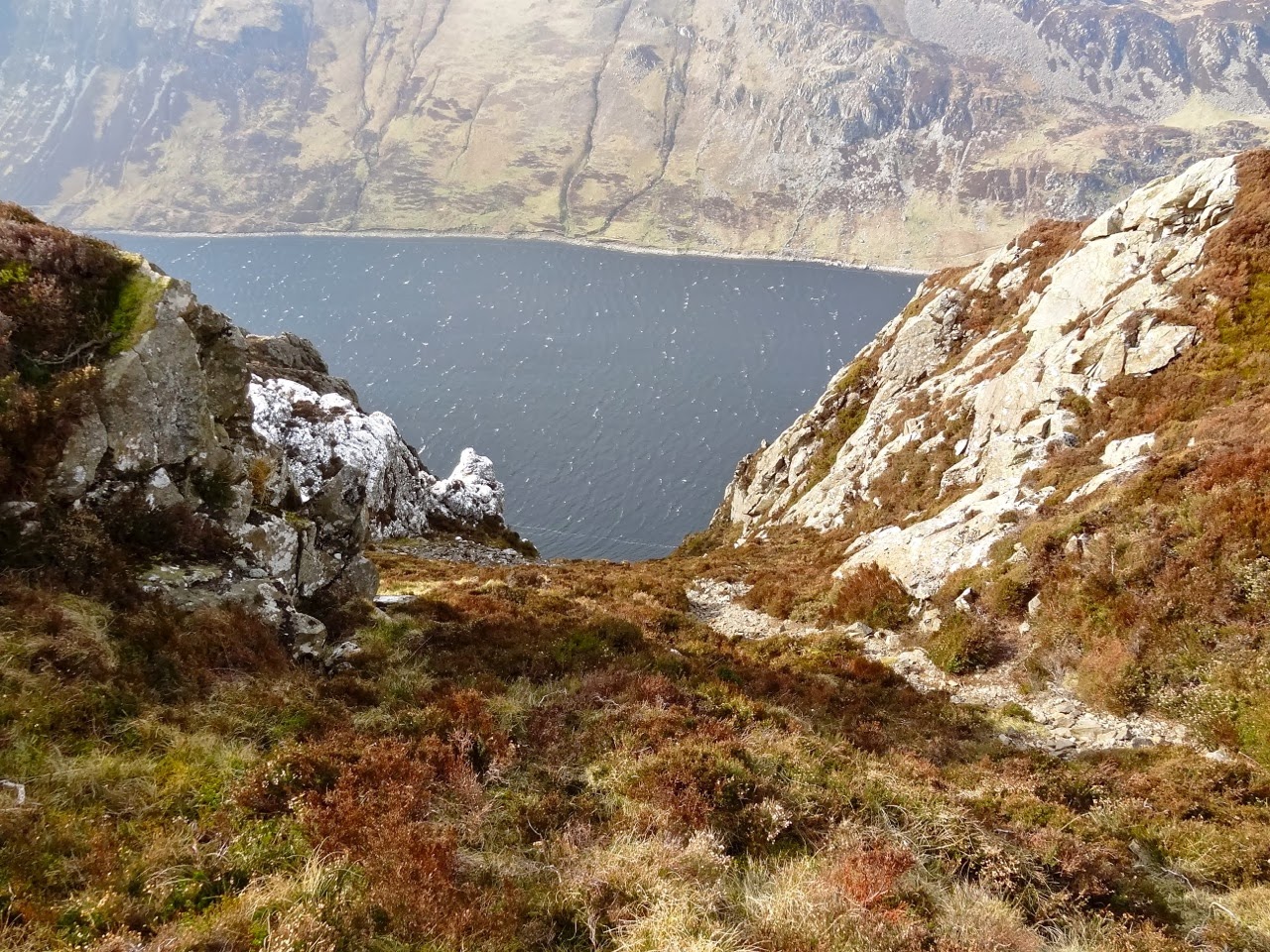 Looking down on Llyn Cowlyd 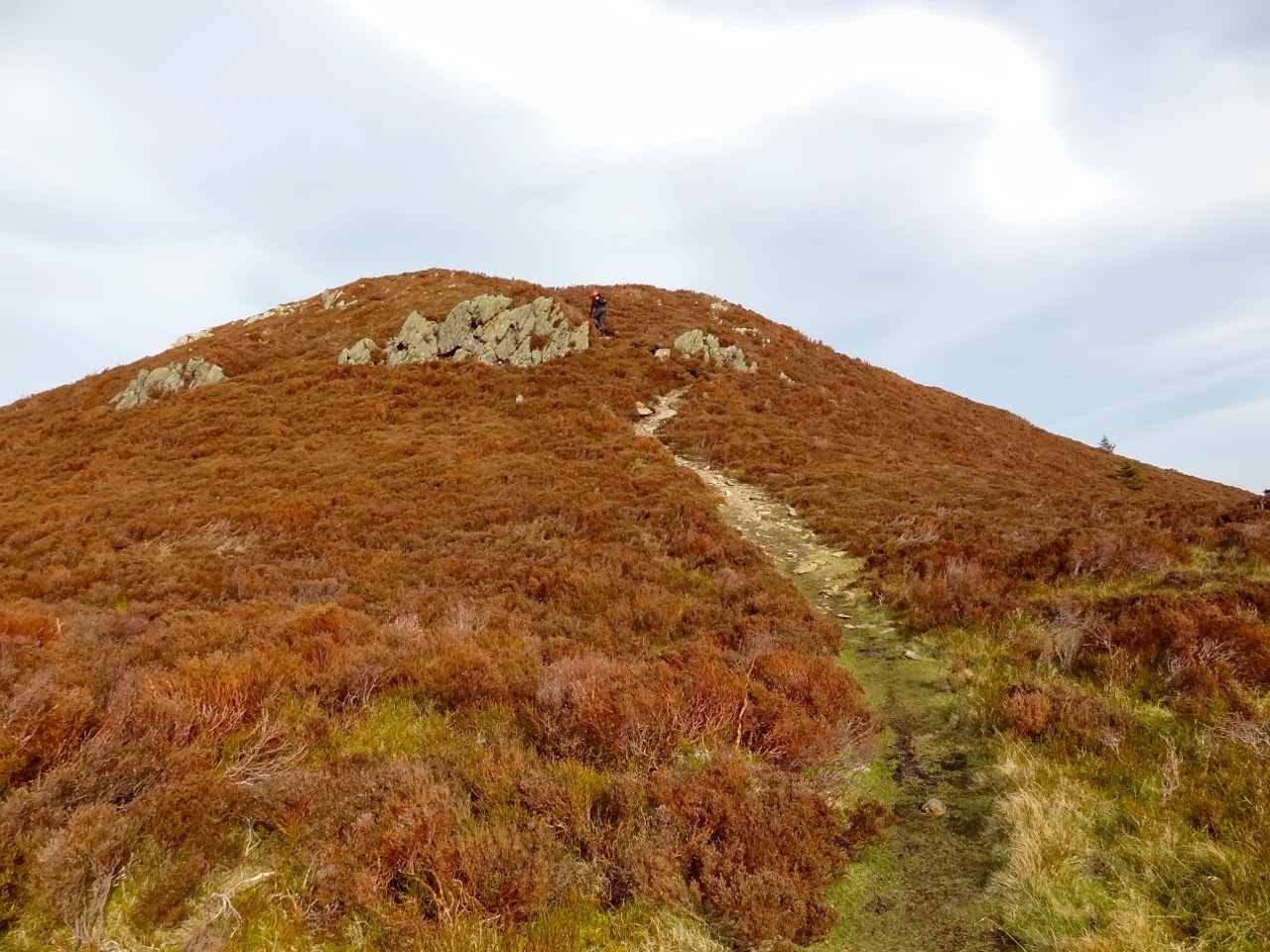 It was really enjoyable walking with great views and all too soon the final summit was on us 634 metres. Sheila in front is almost there. From the top it was a steep and slippery down hill to the reservoir dam. Half way down we found a sheltered spot for a quick cup of coffee and a chance for the group to get back together which had become a little strung out. 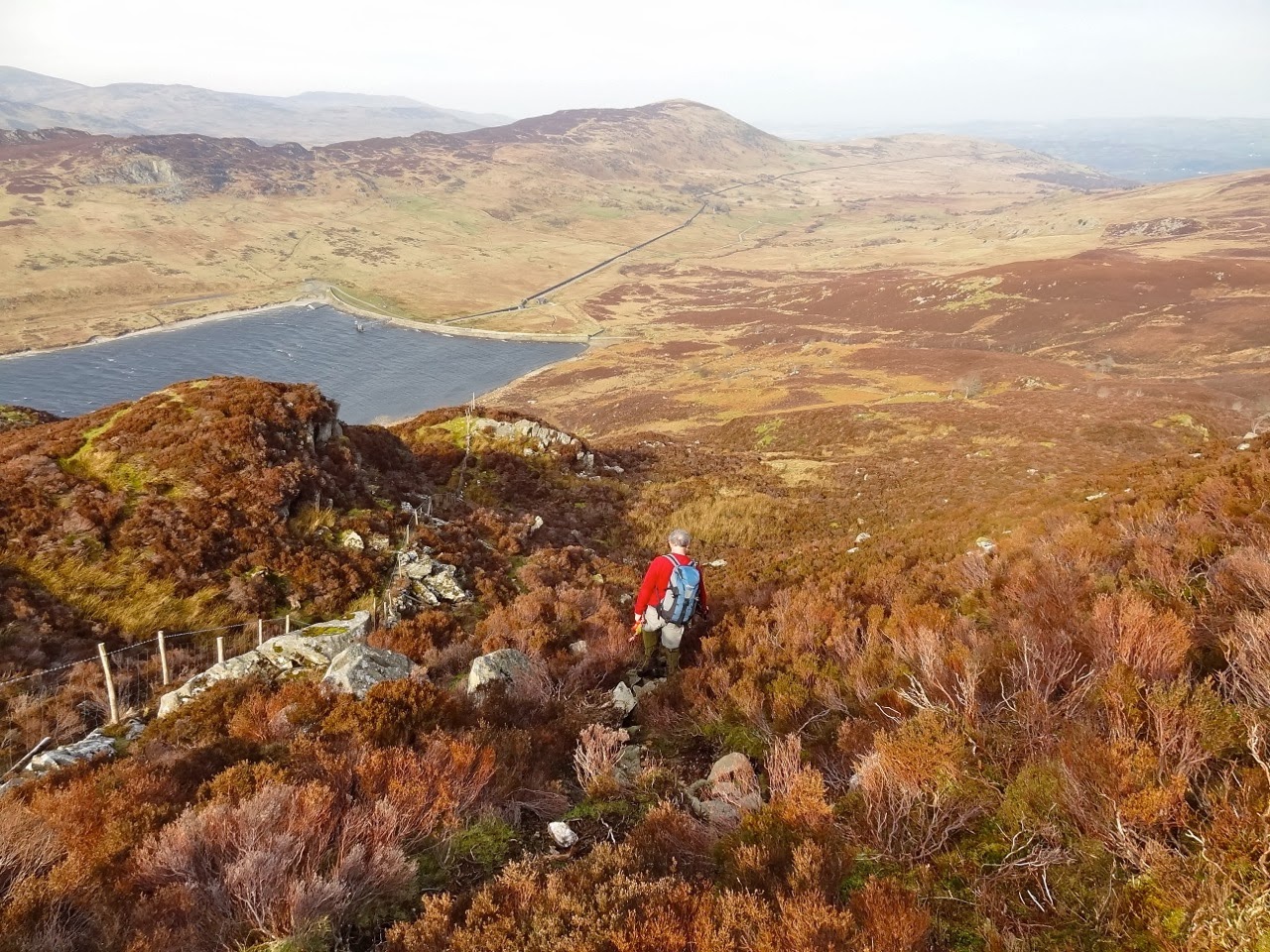 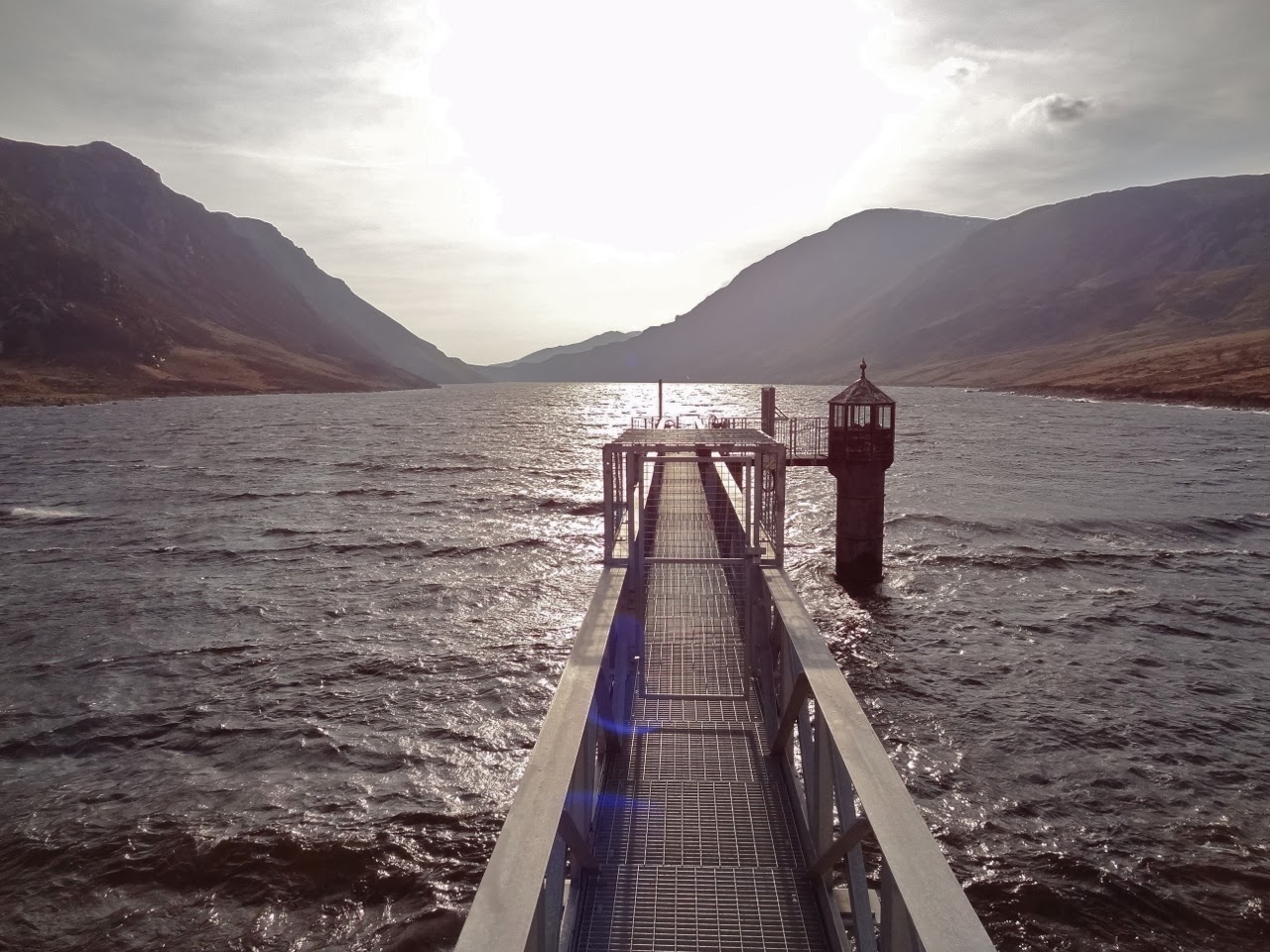 The sun was dropping quite fast although we still had a couple of hours light. The wind coming from the south was howling down the Llyn and all the steel work here was whistling and clanking loudly. I could hardly stand to get this photo.
Our path was along the opposite side of the Llyn and with a little haste we headed off on a good path. Lewis was having some trouble with a sore Achilles tendon and he was struggling a bit with the pace.

I took this shot on panorama setting from roughly half way along the Llyn. It shows the ridge well. 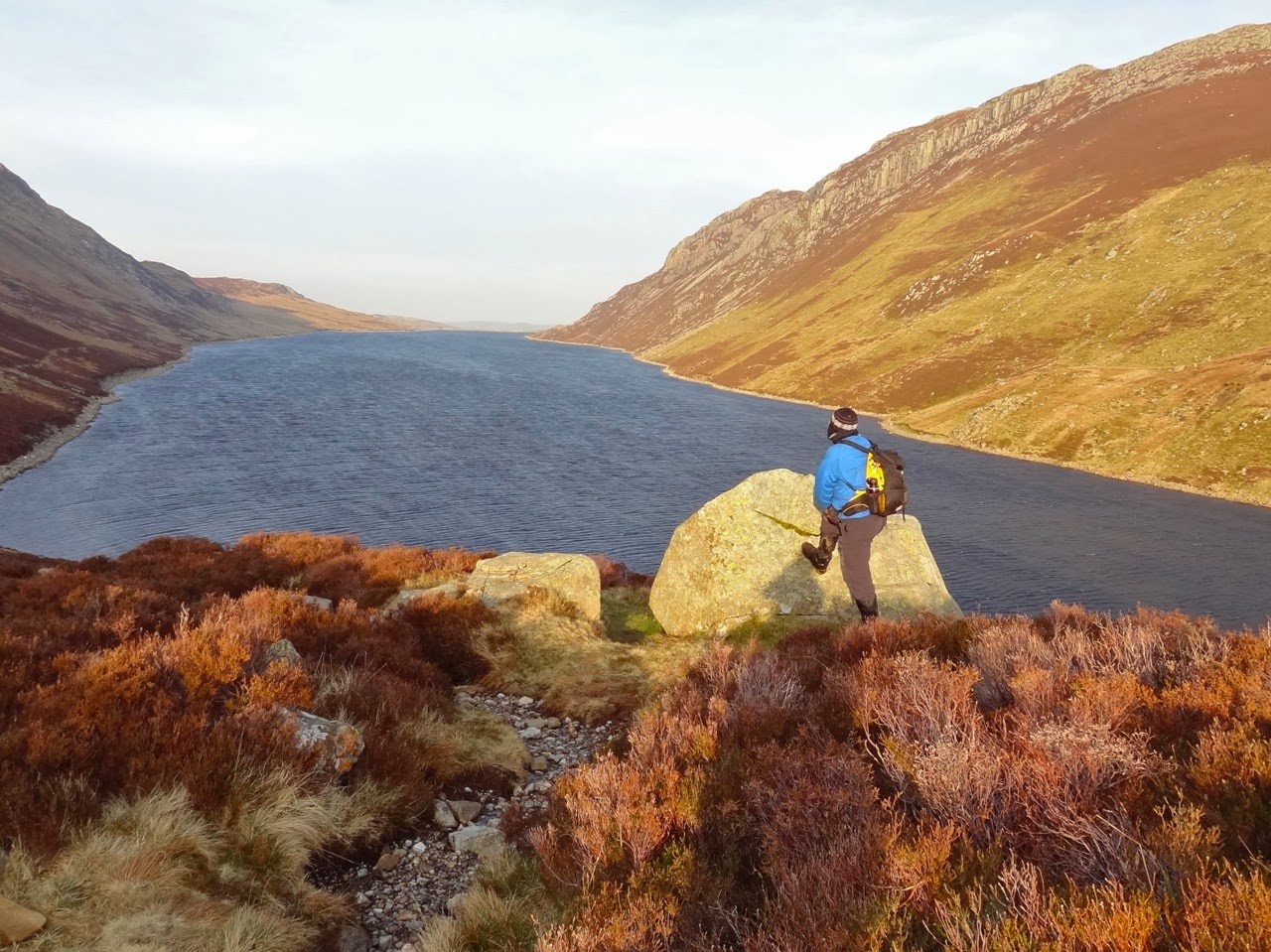 The last look at the Llyn. 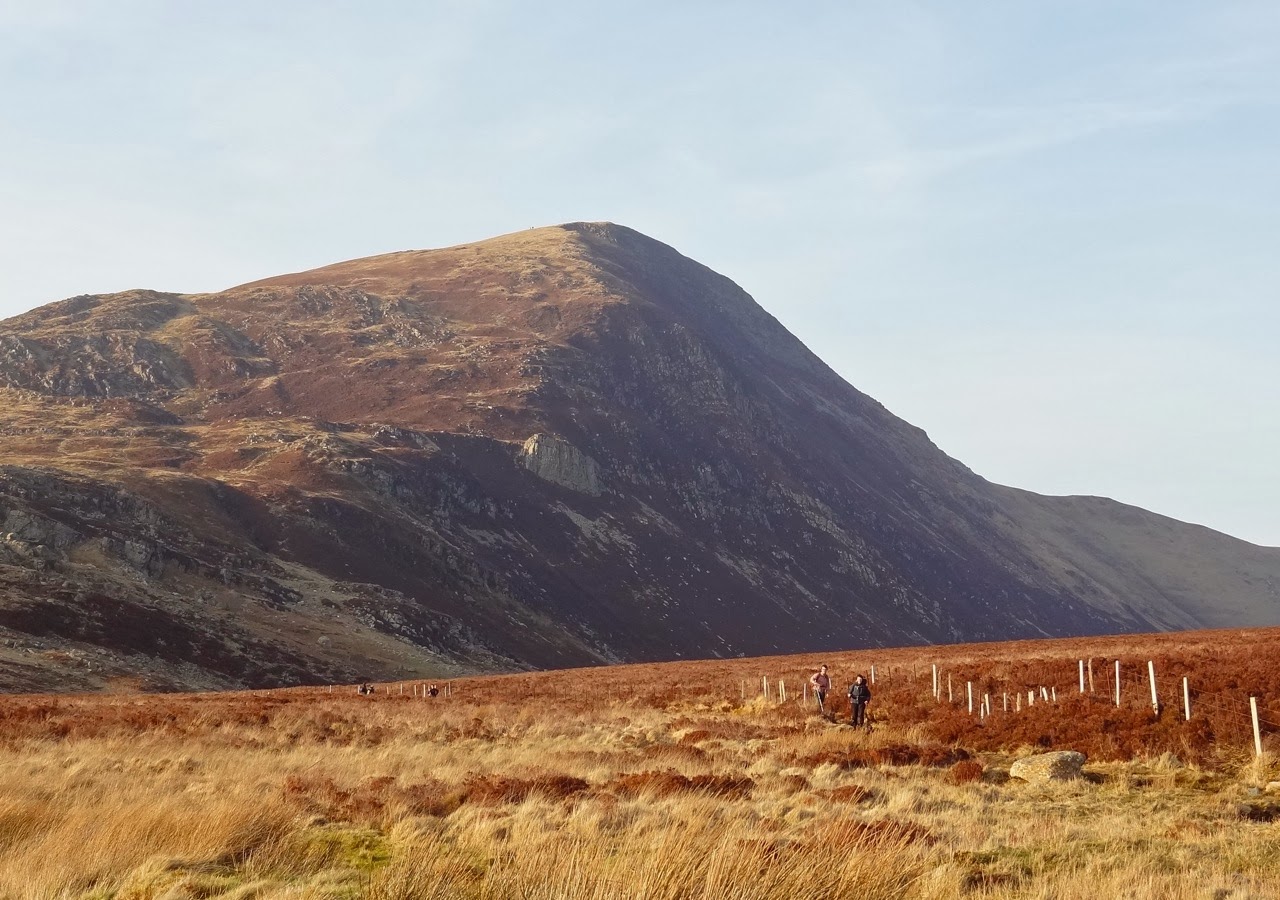 The path follows the reservoir intake stream up to a footbridge which we crossed onto a wide boggy track which after crossing a second footbridge winds its wet way down to the main road back into Capel Curig. The sun was just falling behind Tryfan but my attempts to capture a good silhouette photograph were poor.
Along the road for 15 minutes left us outside the Pinnacle Sports cafe which due to our bad timing was just closing. we used the benches at the front to finish off what remained of our lunches and coffee. The sun was almost gone and i took this shot of sunset around Snowdon from the road outside the Capel Curig car park. 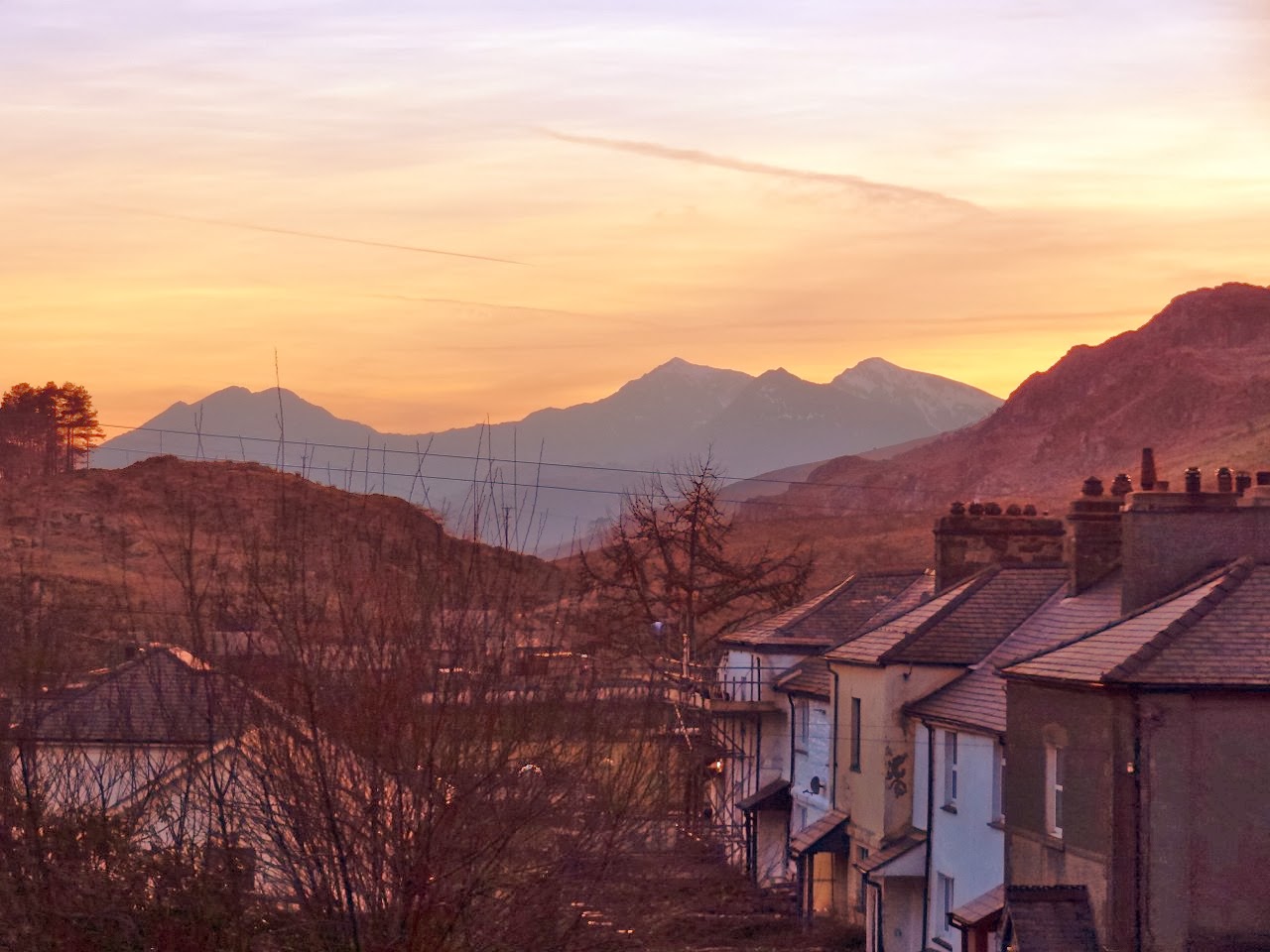 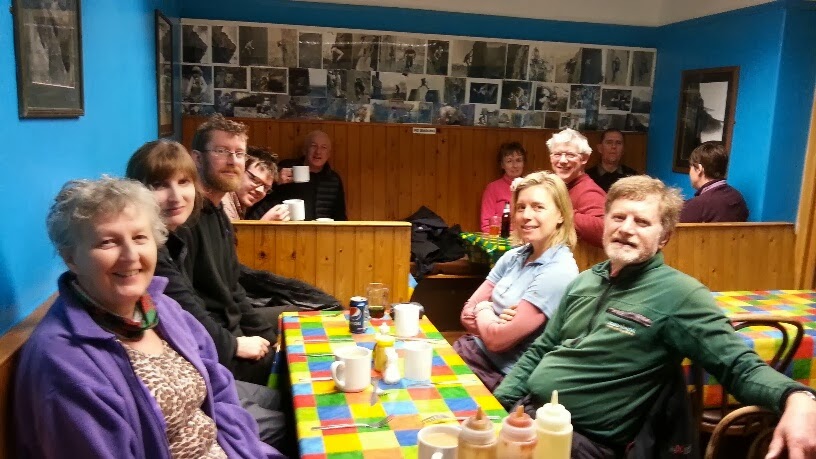 The group celebrating a good day’s walk in Pete’s Eats in Llanberis. 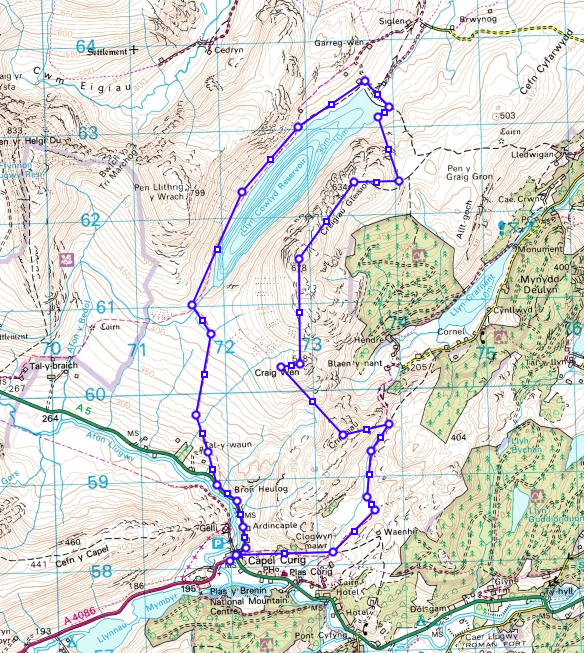 Cracking photos Alan, a lovely area too. Looks like you had good weather as well, always a bonus

Thanks Dawn, for a compact camera not too bad. The wind was fierce but i’m not complaining. No rain and that was a bonus.

A windy day out it seems! Some lovely, varied scenery and lovely photographs Alan.

Hi Gibson, Yes it was, but it was only dangerous higher up in exposed places. We got blown about but it was fun. Glad you thought the pictures were OK.

A good choice of route, Alan. At a pace very similar to ours in the Peak District on Saturday. But you had more wind. I've had a word, and am told it will not be so windy in Eccles tomorrow!

It was very enjoyable even with the high wind. There is a lot of hot air in Eccles.