Day 0. Prior to Torridon.

Having travelled from Fort William to Strathcarron Inn I met up with JJ and Viv. It had been raining most of the way there but it had now stopped as we set of for Coulags Bridge along a good river bank path. At a pleasant grassy section we lunched in warm sun watching a Dipper searching for food.
On an unusually warm afternoon, tee shirt weather, we strolled over the bridge and through a mixed wooded forestry. Our plan was to exit the forestry area and then find a suitable camping spot.
Passing a very nice flat green area we pondered until we saw some animal feeding trays. Ideal tick area we thought and moved on to find a good spot a little further on with a side stream close by.
Once pitched JJ and I went up the adjacent hill to see if we could pick up a phone signal which we did. 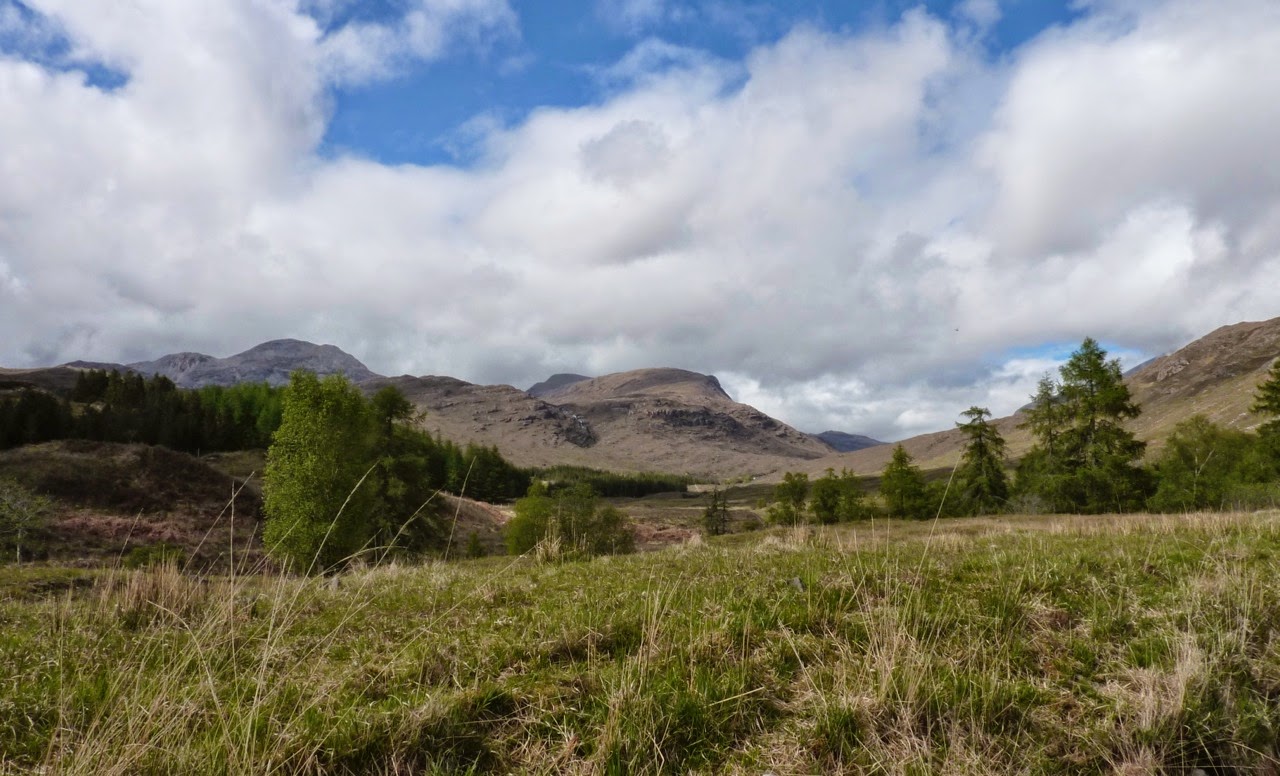 Nice pitch for a wild camp.
We kept an eye out along the path expecting Mick and Gayle before dark. They arrived in good time.
Next morning it was decided we would breakfast in the bothy which was about 25 minutes away.
We found the bothy empty and relatively clean although someone had left a couple of beer cans in the fireplace. Do people think beer cans find their own way down the hill and into the bin.
As we left, it started to drizzle and by the time we reached the bealach it was heavy enough for full waterproof kit. Passing the lochans and the huge slabs of rock littered with eratics we had great views of Liathach and Beinn Alligin. The stepping stones on the burn between 2 lochans provided temporary  entertainment. 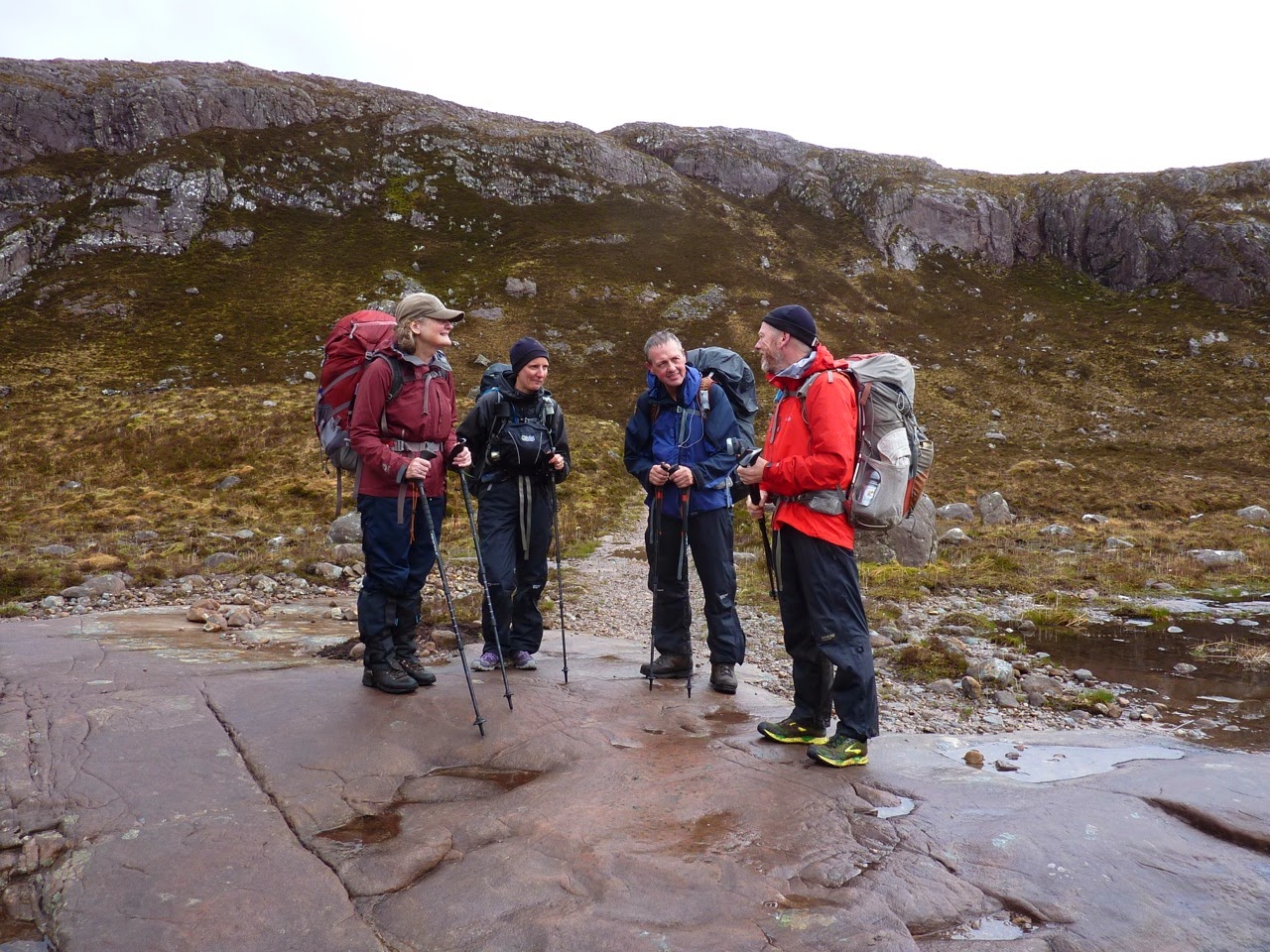 Viv, Gayle, JJ and Mick asking everyone to check if his hat was on straight.

Waterproofs now back off Torridon quickly came into view with mirror reflections in the loch. Meeting the road at Annat it was quite a distance of road down to the hostel where we had to wait until 5pm to book in. Fortunately the hostel reception area was open so we did have a seat at least.
A heart attack was almost imminent as Jules, (the good lady warden) told us that she had no received any parcels for myself or JJ.  Here and with exceptional generosity a number of offers were made by other challengers to help us out with provisions. Fortunately a half hour later Jules found the parcels. Phew!.
We celebrated with a nice bottle of beer after super and lots of chat with other challengers. Mick and Gayle retired to their tent and that was the last we saw of them until Montrose.
The wonderful hostel had now become very busy with a rambling club party. Enough booze and food to float the Titanic. They made me and others feel like we were intruding upon their private party. The kitchen area especially so. Its a shame hostels have had to resort to this type of money raising where a lone walker in a wild area would not have got a bed and those that could afford to have rented a property for themselves take up valuable hostel spaces. 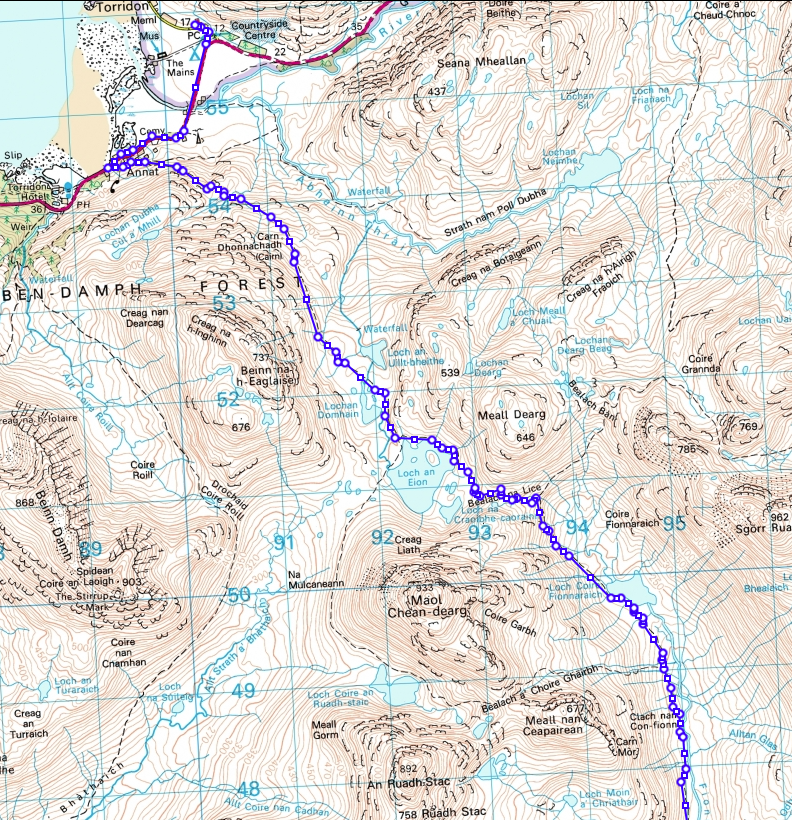 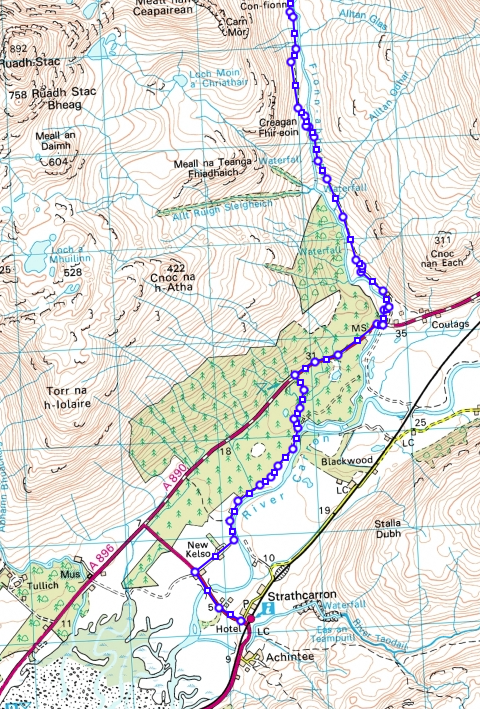 I have taken my seat and bring on the report.

Looking forward to the next installment!
Re the hostels...I to have been subject to the taking over of kitchen. Often by C-n-do! Total pain!

Tuned in this morning.

Wonderful, will catch up on the next few installments when I return. The hostel situation is something I have experienced a few times. Remembering how hostels originally ran, it is a sad state of affairs. My tendency now is to avoid them.

More to come. I was a bit shocked with the hostel situation. Its been a long time since i stayed in a hostel so my expectations were shattered and disappointed. The spirit of the hostels as i remember was to ensure foot travellers were accommodated. This seems to be overlooked now.

Not anymore Alan, at times I have been treated as an oddity and with indifference.