Steve Croft was in the bunk above me and I heard him packing up and clearing out as I thought, at around 4.00am. So it was a bit of a surprise when I saw him in reception around 8.30am.
It seems he had a bit of clostraphobia and had to get out of the room. Was that a polite way of saying the snoring kept him awake?. Not that I heard any snoring from the others.

I knew that there would be no rush to set off this morning as Viv's train wasn't until 10.30am, I think. JJ needed to go to the Post Office and I needed to go to Tesco and an outdoor shop to replace my walking pole bung.

Shopping done we said our goodbyes to Viv and we get underway. The day got off to a strange start, unplanned.
As we set off for the footbridge at Coylumbridge to head off up the Lairig Ghru we bumped into Croydon going in the opposite direction. We stopped for quite a while chatting. He was having a bit of a break before setting off again and was heading into Aviemore for a walk about.
Off we marched again.
About 30 minutes later JJ mentioned that we should have turned off where we met Croydon. I suggested going back but we ended up carrying on and going as far as  Loch Morlick instead.

We caught the odd glimpse of the loch as we walked along a very wide track heading towards Rothiemurchus Lodge. Many mountain bikes passed us. We took the path named Piccadilly rather than going to the lodge. This turned to be a good decision when we were told later that the latter path was very boggy. 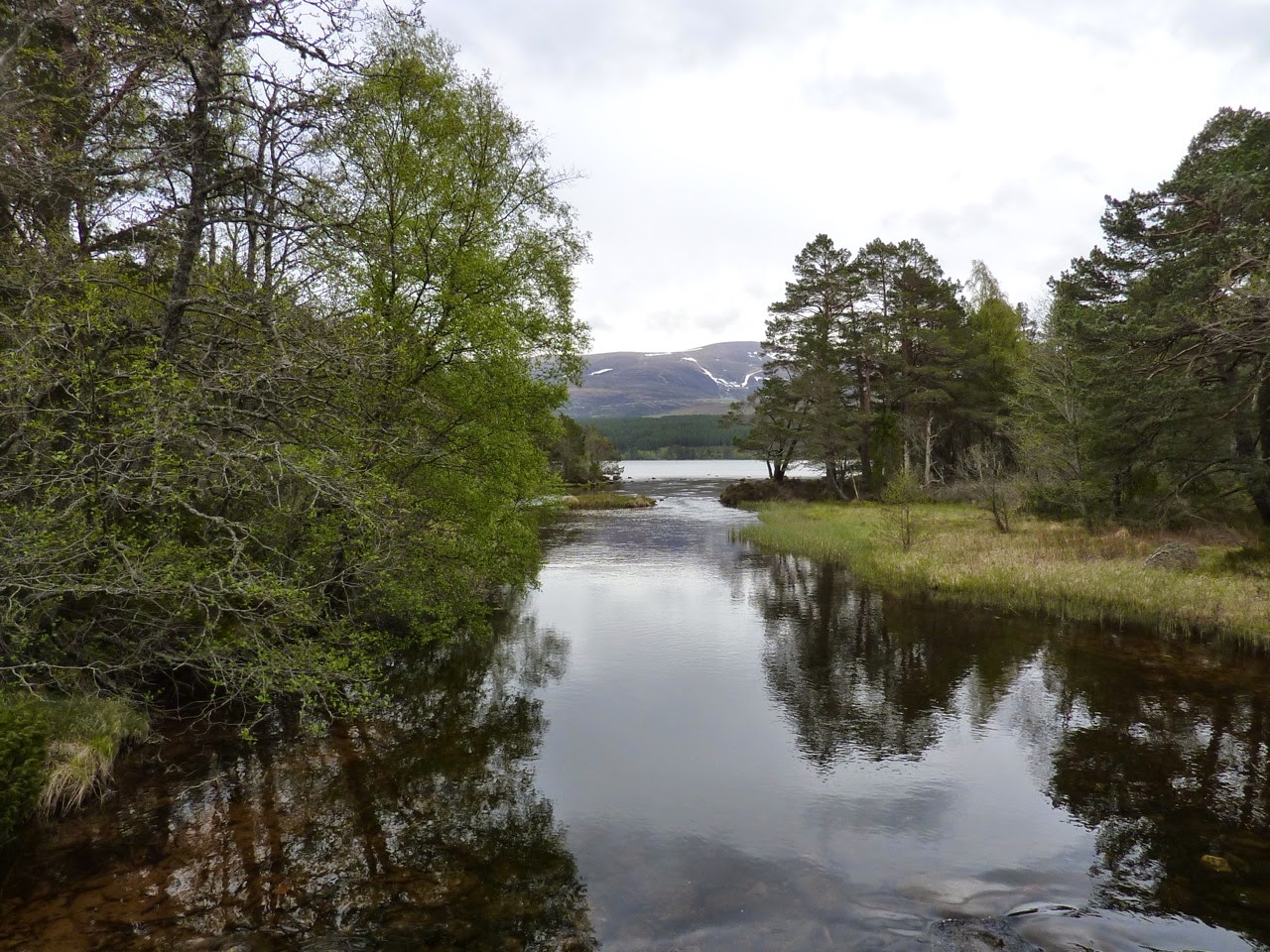 A glimpse of Loch Morlick

As we made progress up the Lairig Ghru and just as we topped the tree line we stopped for lunch. A lovely spot with the even more lovely Allt Druidh gushing past far below us. The sun was with us and view extensive. 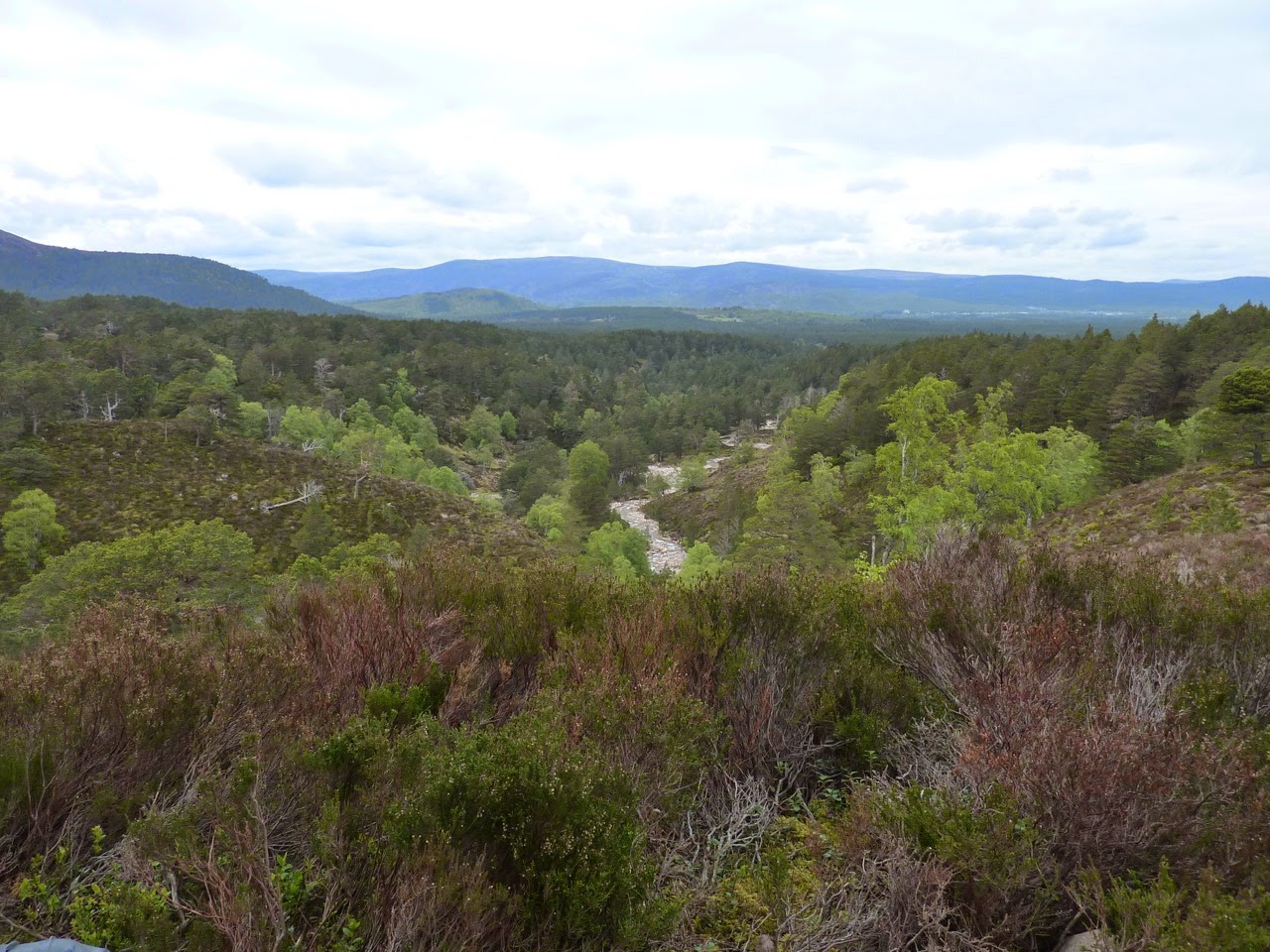 Lunch stop
This was my first time through the Lairig Ghru and i had heard all sorts of stories about going this way being difficult, dangerous, awful, beautiful, fantastic, never again etc etc. So i didn’t know what to expect and kept open minded. 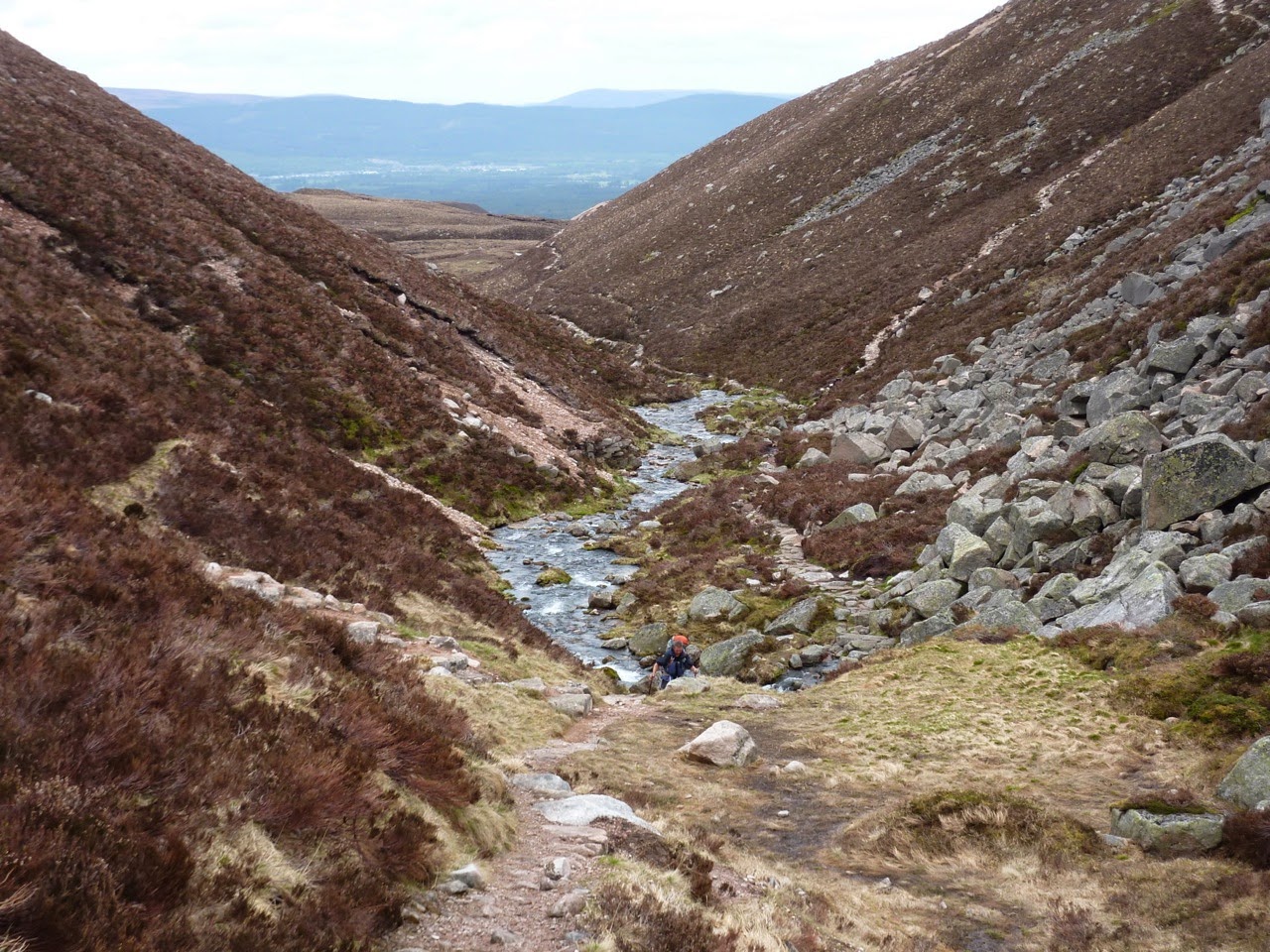 On route to the watershed. Lairig Ghru.
The landscape certainly changes quite dramatically from calm to rough and tumble and then back again. The higher we went i found it inspiring, the exposed rock walls on the side of Ben Macdui are just awesome. Once over the watershed the views down to Glen Dee and the Monro tops of Braeriach, Cairn Toul and the Devils Point stop you in your tracks.

I had been warned about the massive boulders on either side of the watershed being particularly difficult but i didn’t find that at all. I found them good fun. I have never struggled on boulders as i have that knack of looking 2 or 3 steps in front of my next footstep. There were 3 short snow fields to cross but again no difficulty although i did go knee deep on just one occasion. Grouse were in abundance as were mountain hare. 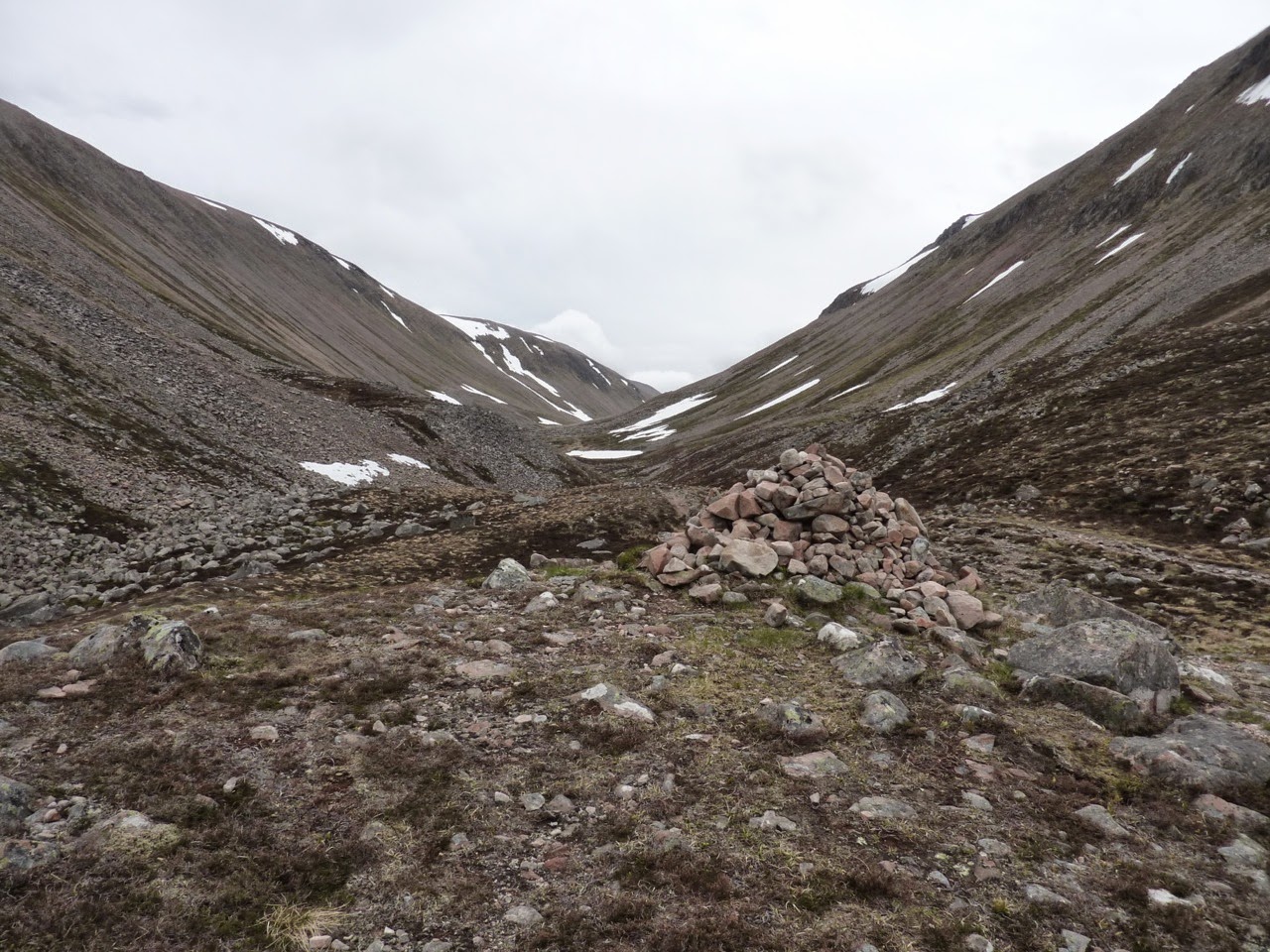 I stopped numerous times looking into the pools of Dee, wonderful, crystal clear waters, bubbling and gurgling feeder streams. They seemed so pristine and ancient. Special even.
It was quite blowy going over the top but nothing to worry about although you had to keep moving to avoid wind chill. 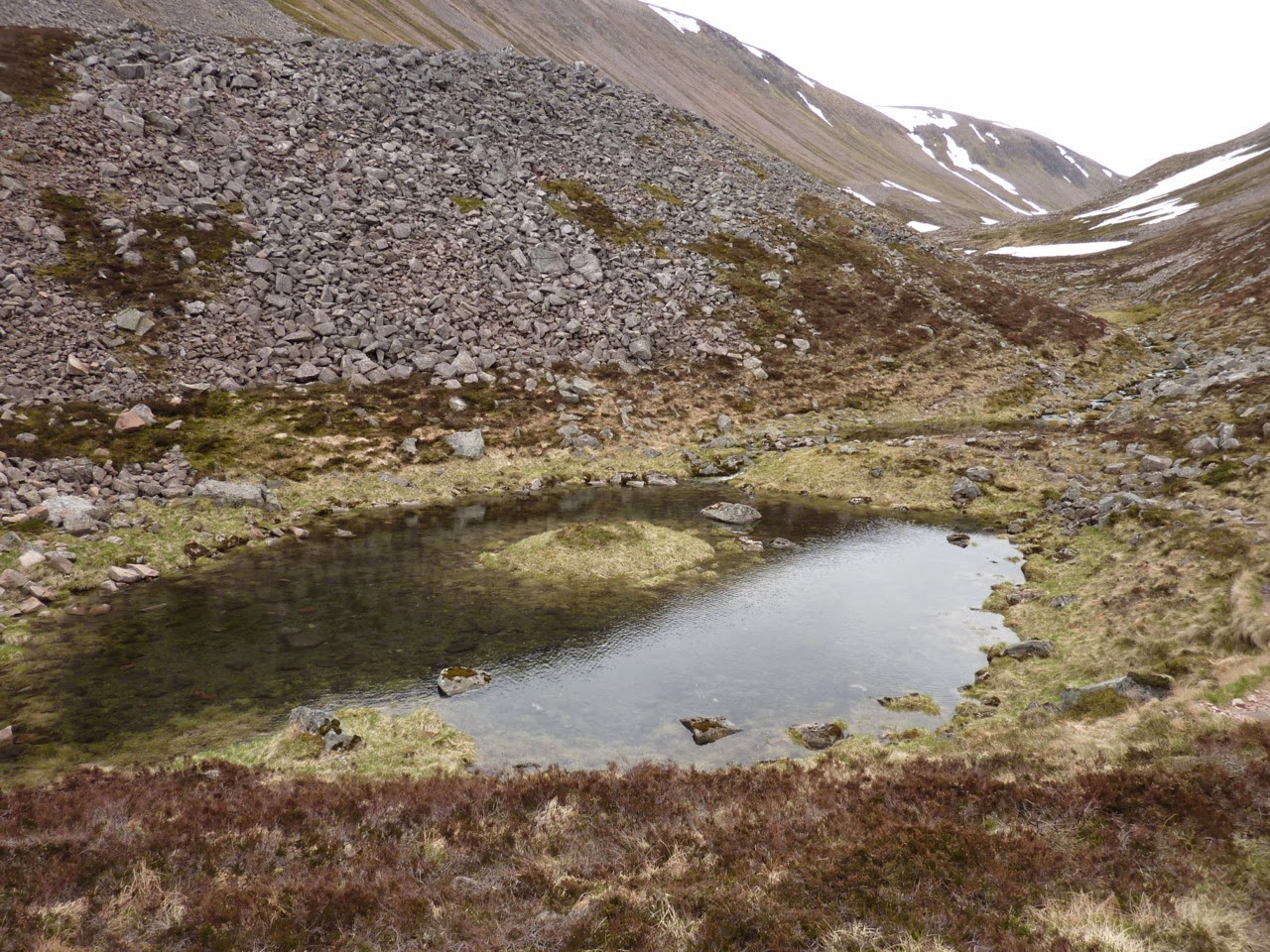 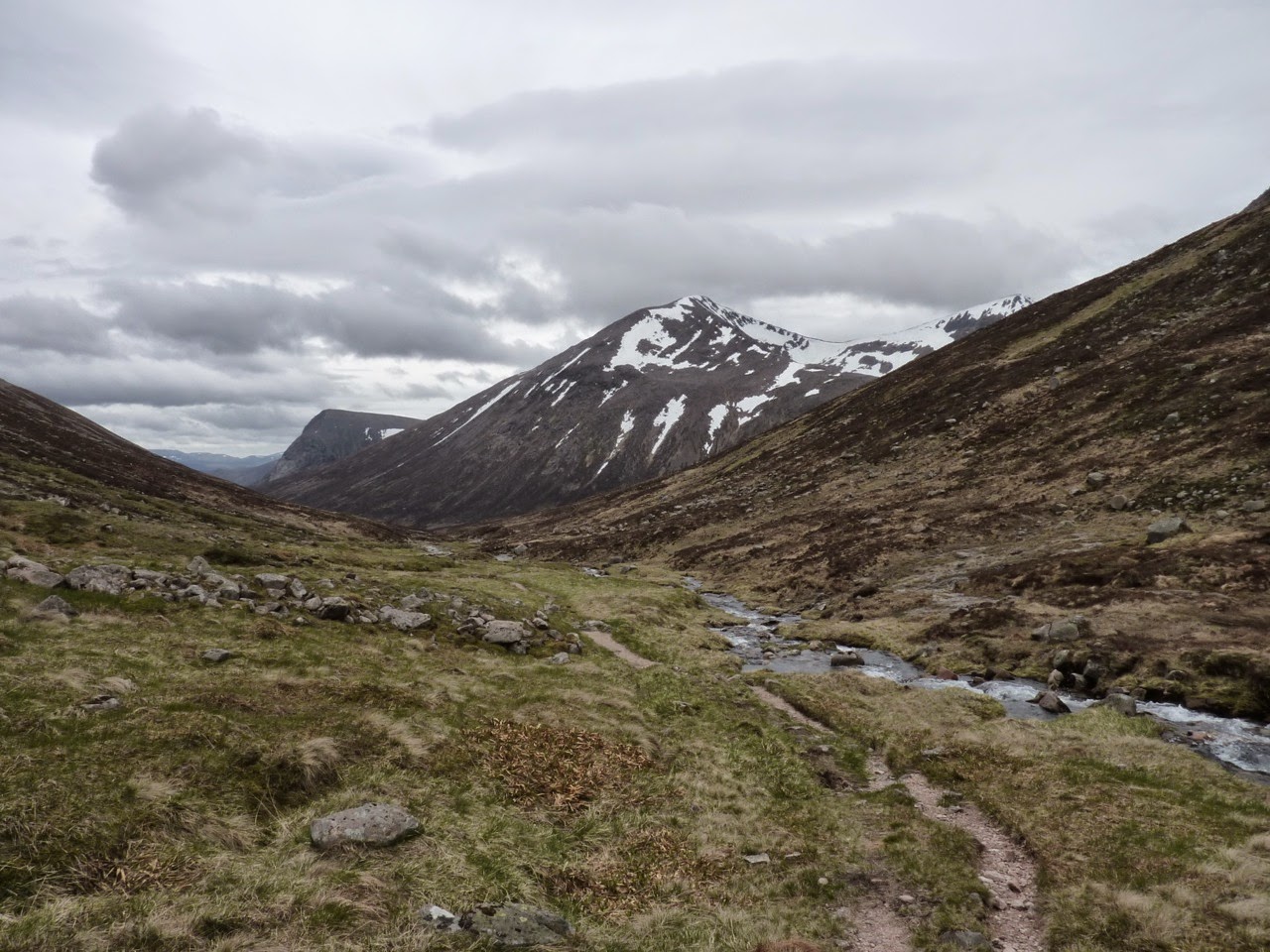 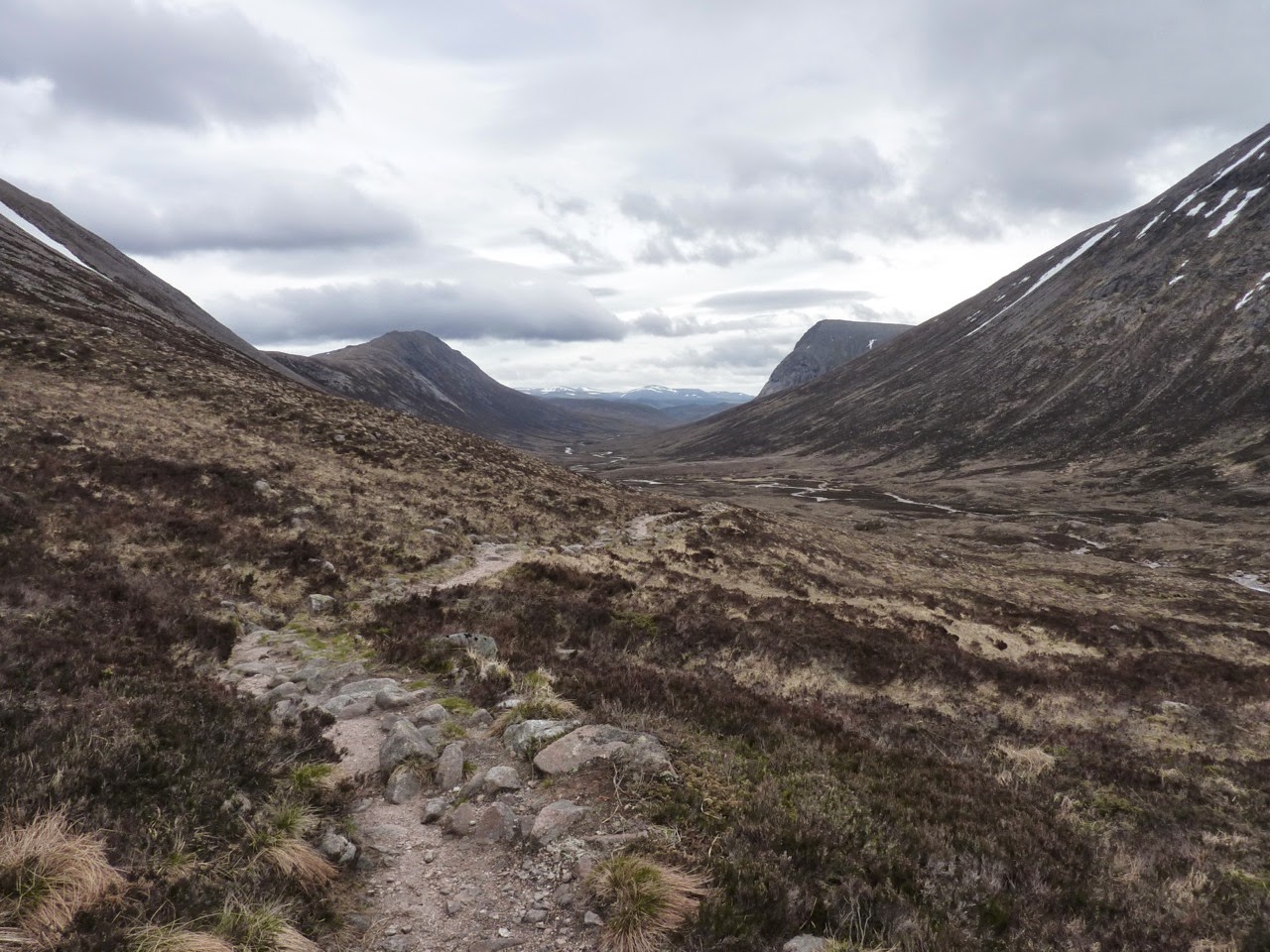 Glen Dee in the distance. 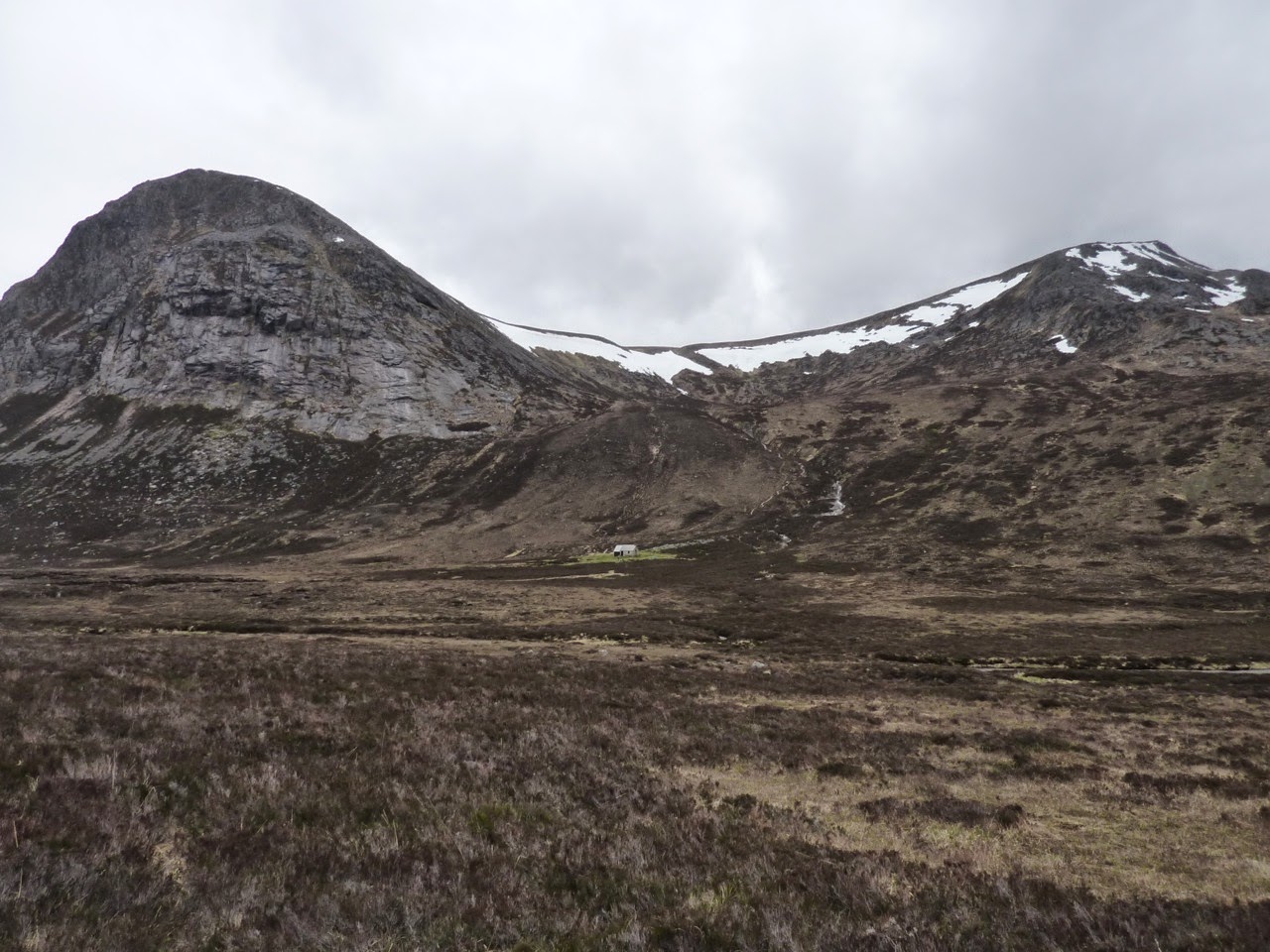 The Devils point, Courer bothy and Cairn Toul.
I waited for JJ at the top but then carried on down quite quickly. I was a bit surprised at the gap that had grown between us. I hadn’t realised i was moving so fast.
Opposite Courer bothy i met Ian Sommerville again and so decided to wait with him until JJ caught up. A number of people with dogs were at the bothy and so i decided not to bother going over for a look.
It was quite a while before JJ arrived but eventually he did. As he approached us i recall him saying that he was a bit tired. Or something similar with the same meaning.

I felt good, a week into the challenge and i was loving it. So far, this day had been my favourite.
I asked JJ if he still fancied going on to Derry Lodge and the answer was yes. It was now 6.10pm and we knew Derry Lodge would be another 2 hours. 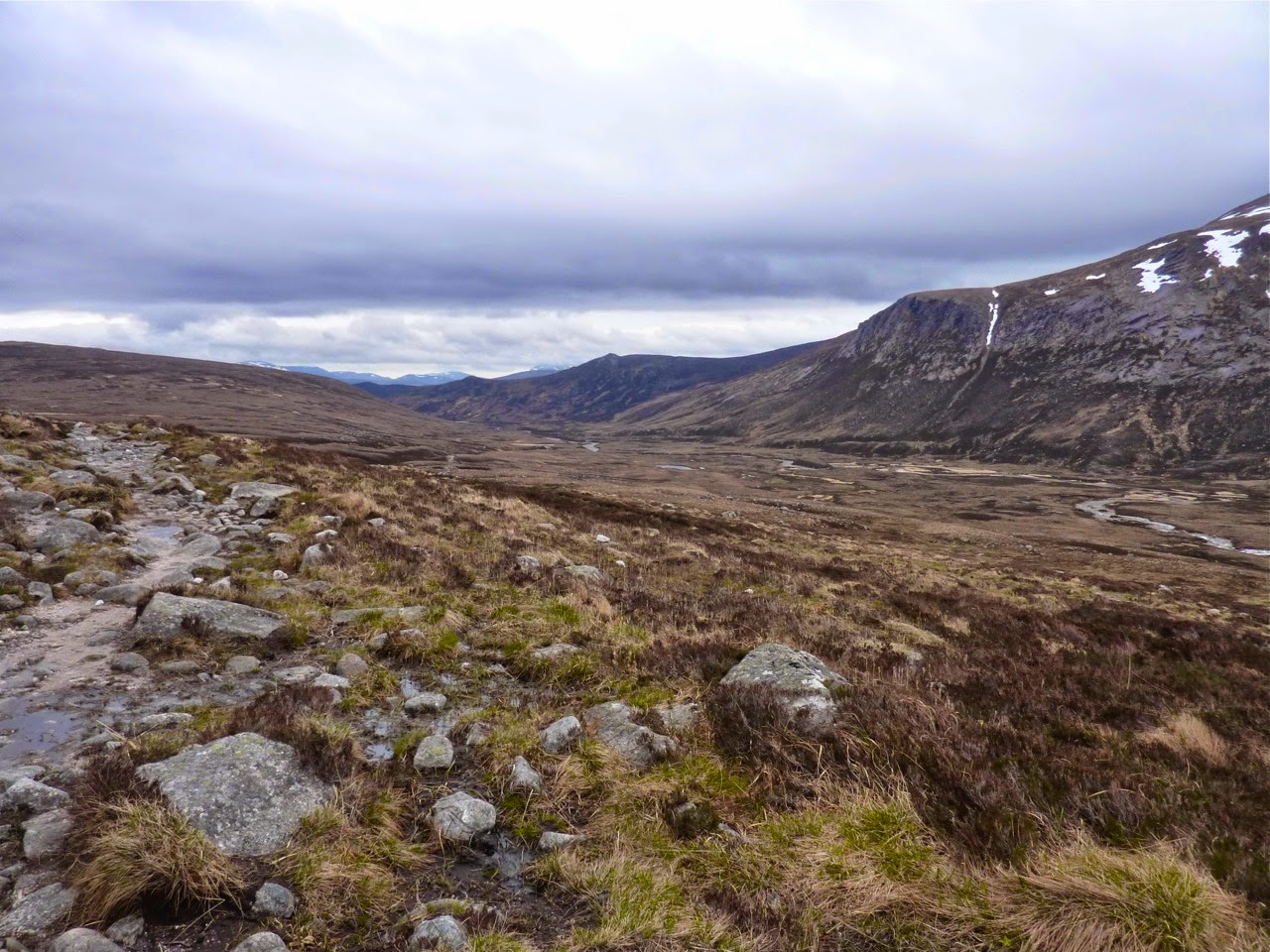 Glen Dee
Rounding the shoulder of Carn a mhaim, the views down Glen Dee and Glen Geusachan are so big the camera doesn’t do the scene justice. (Well my camera anyway).
It’s a lovely route, first along the Allt Preas nam Meirleach and then Glean Laoigh Bheag. I was so pleased the scenery was good as i was now feeling the tiredness creeping on me. Not only was it a long day but we had not had much to eat or drink throughout.

Two hours past and Derry Lodge appeared, we spotted 3 tents in amongst the coniferous trees. It turned out these were not challengers. We were the only ones there.
Picking a nice spot i cleared the pine needles as best as i could and set up the Duomid. I got water and put the pan on for a brew. Whilst this was heating up i blew up the Neo Air and set out my camp.

It was good to have a green tea and i thought i better have a soup before my meal and get some liquids inside me. Finishing my soup i looked at the time, it was 21.54pm. The wind had really picked up and the trees were noisy being swayed about.
I was too tired to make my meal. I cleared up, shut the door and went to sleep. 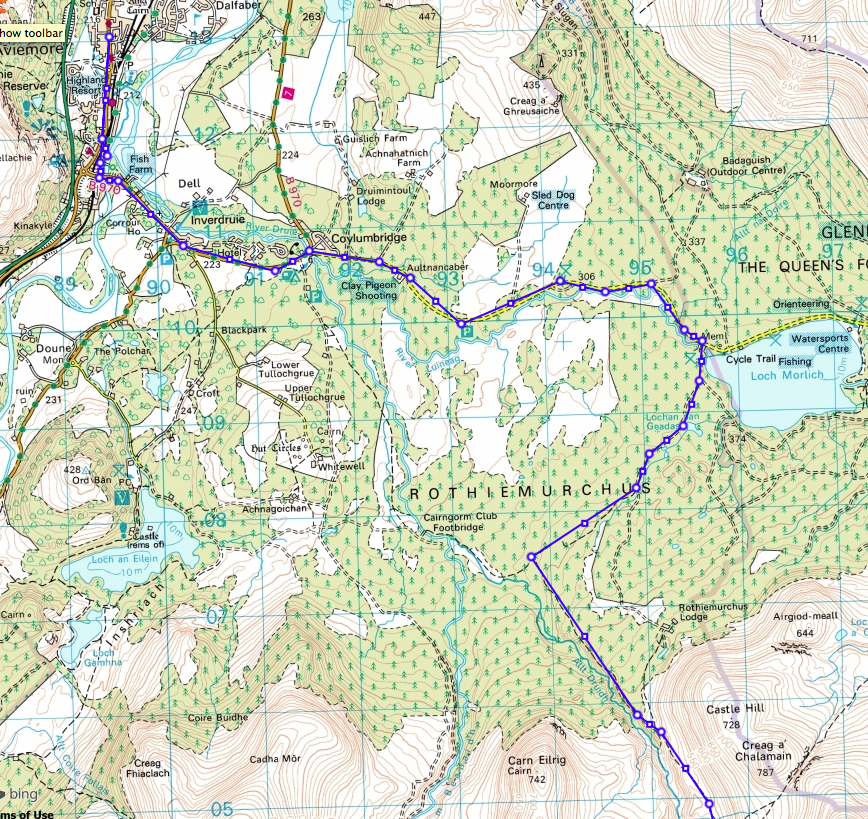 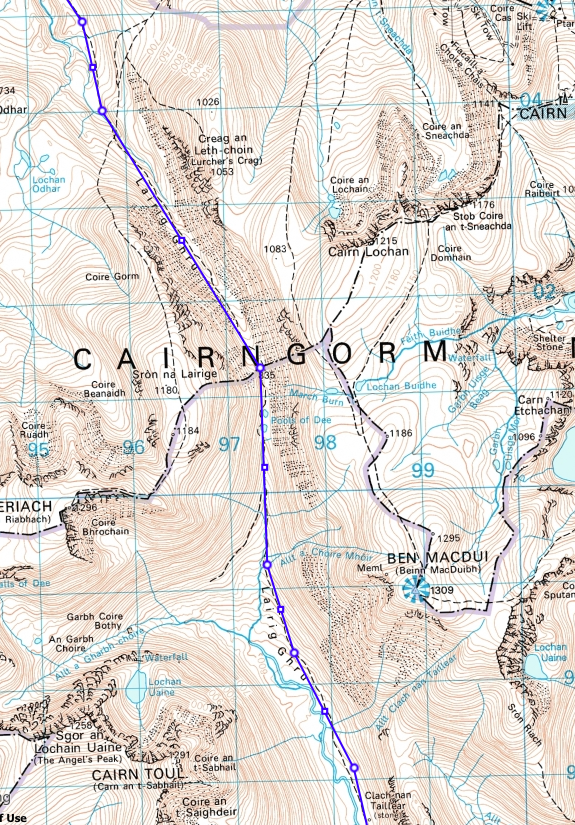 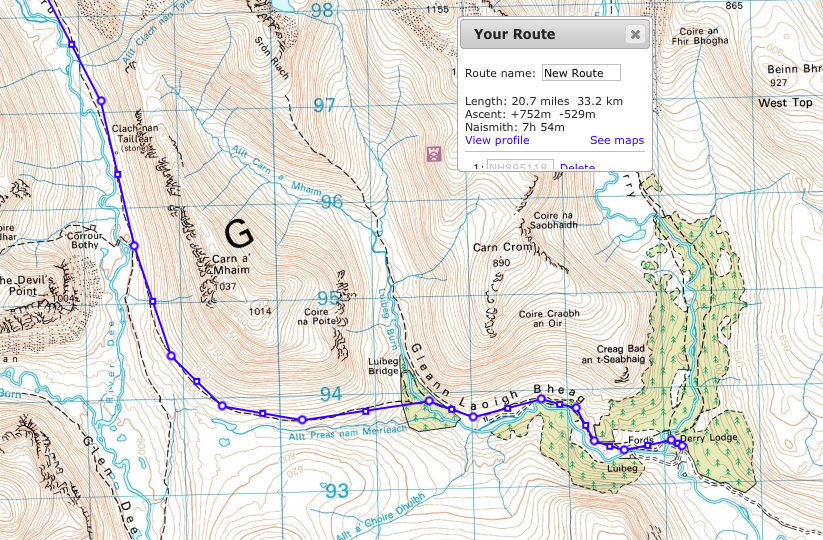 Another excellent day Alan, but I'm getting a little concerned about your ever increasing mileages. I fear you may be stretching JJ to previously unknown limits!

JJ did the route Martin. Probably to ensure he got back for Wednesday. We also had a couple of short days so it all evens itself out.
The Lairig Ghru day was special though.

I was joking really Alan - you both seemed very chilled whenever I bumped into you. Really glad you enjoyed the experience.

When the mileage starts to get near 30Km i get cold sweats. Yes, i enjoyed it all the same.

That was a hard day Alan, very well done the pair of you. The devils point is the English name given to it. The Gaelic was not so coy! Derry Lodge area has recently been getting a bad press from over use, a great pity. It used to be a fantastic spot. Camped there one winter, sharing it with a group of stags.

Cheers. Yes i was told the Gaelic name and why the OS wouldn’t add it to the maps. Derry Lodge is becoming a bit of a toilet, thats for sure. Shame, i would like to see it back up and running. It has power to it so it wouldn’t take much considering the NTFS own it.