Day 6. Started well. Nice warm day and the smell of bacon in the frying pan. There’s just something about that aroma that starts the heart beating. Dressed and out to greet Mike, he held up his sponge like a trophy, he uses it to clean the frying pan and it had been eaten by “Something”. Fortunately the bacon and bread must have been in a safer place.

So i started the day off well with a cup of green tea and a bacon panini. It wasn’t long before others enjoyed the same start. The beer had almost been drained the night before but i think Andy took the litre which was left so that Mike didn’t have to carry it back to the car. Very thoughtful. 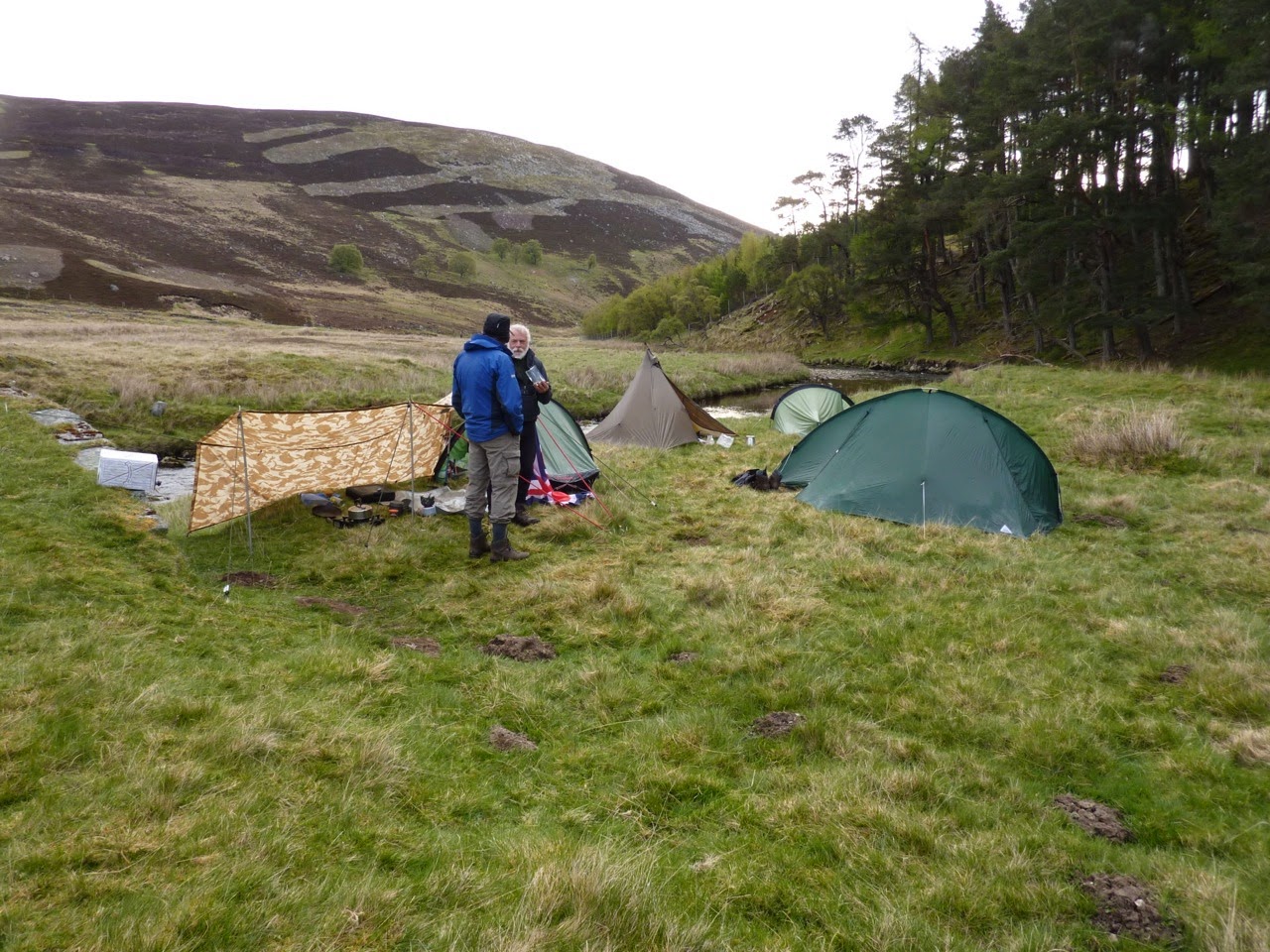 Camping in Glen Mazeran, The Pieman, Mine, Croydon’s, JJ and Vivs.

We were soon packed and away. Viv was suffering a bit with her feet and bravely wrapped them in a type of cotton wool pad. This issue is not new to Viv and she battled on.
We looked out for a path which avoids the Lodge but somehow we must have missed it and before we knew it the lodge was upon us. (We did try, honest). As it happened nobody was home. 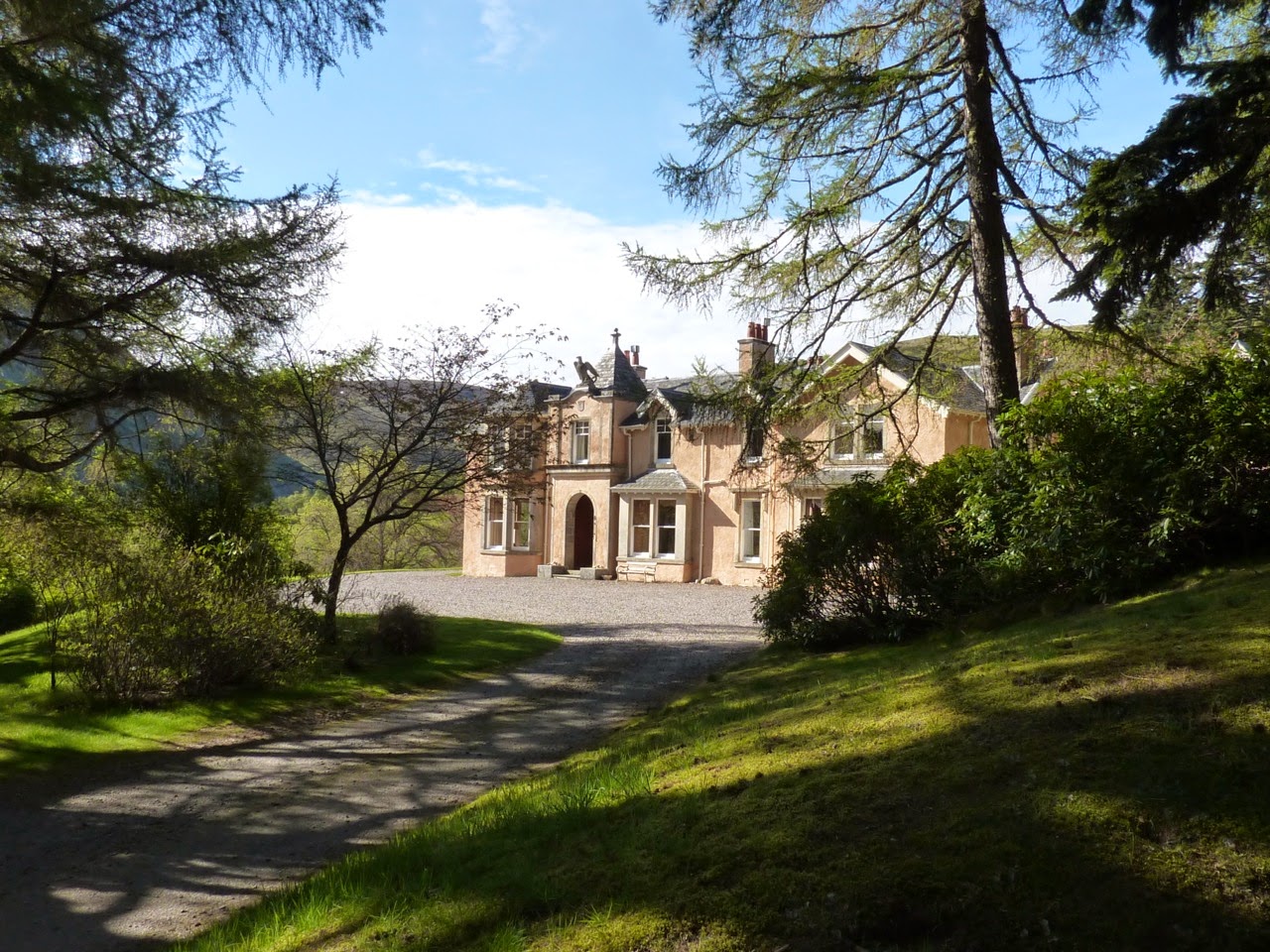 Glen Mazeran Lodge.
There is an interesting read here.
The area around the River Findhorn is exceptionally beautiful. Certainly a place to savour on another trip.
Once across the bridge over the Findhorn we stopped to check our path as there were a couple. At this point Andy Howell and Kate Foley joined us. Onwards and upwards. 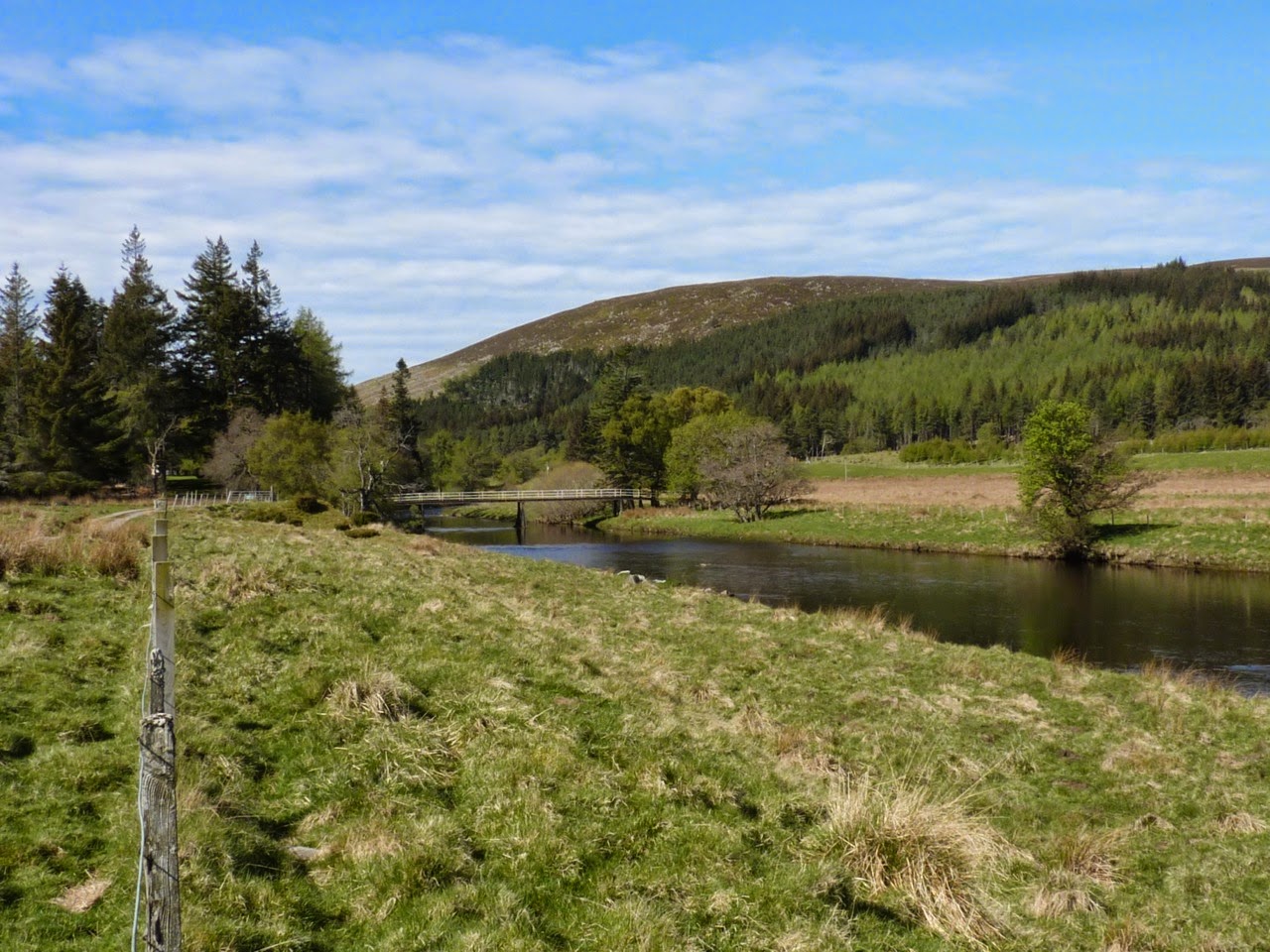 Bridge over the Findhorn 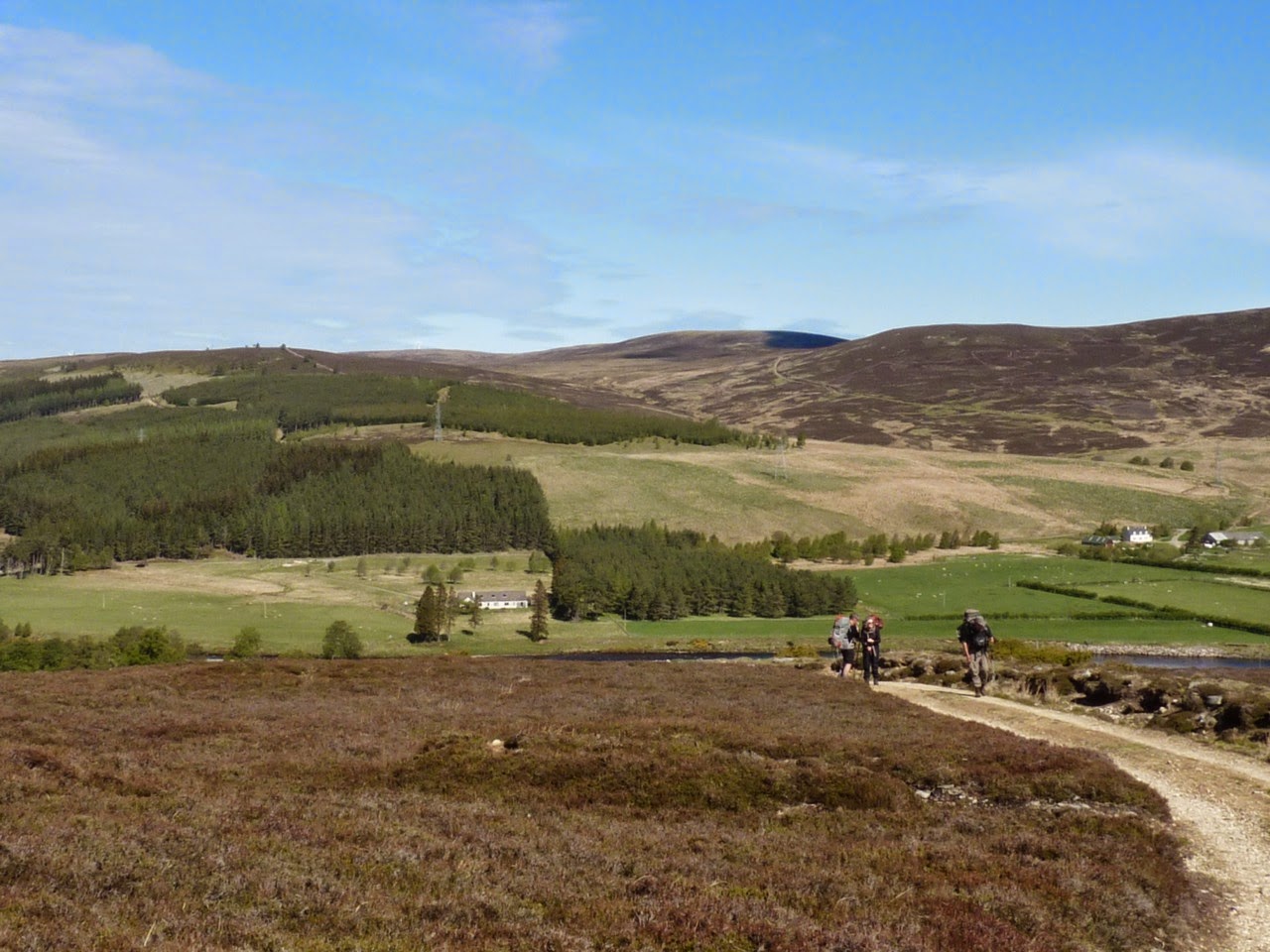 Beautiful surroundings.
Although we were on a good LRT, it was steep. Gaps soon opened up between us all as we made our way up. A new shooting cabin made for a good place to brew up and it was welcome. Robin and Steve were there too.
A very nice new stove was in place and it looked only weeks old. Not far behind us were Andy and Kate but they left prior to us. 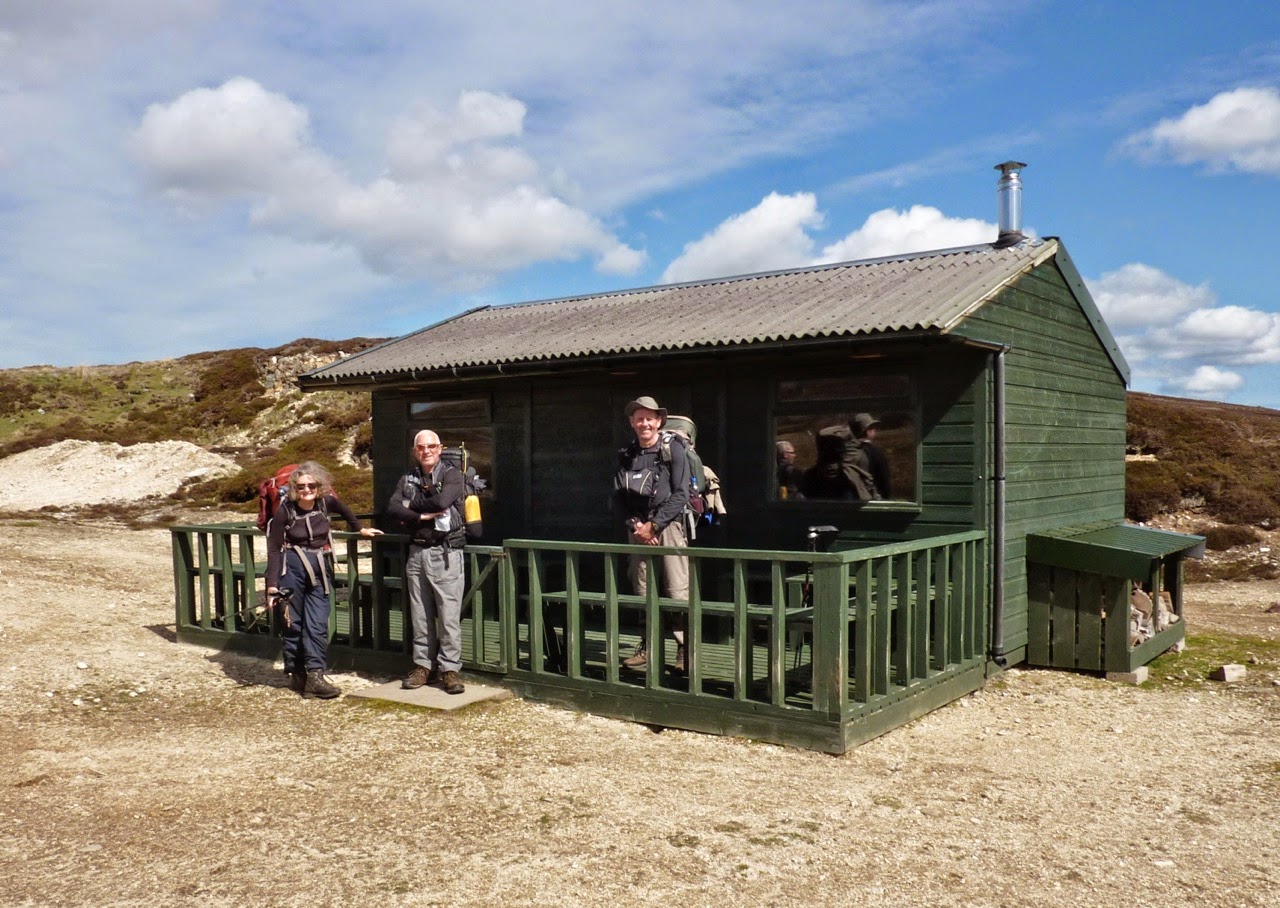 New shooting hut, Viv, me and Croydon (Mick).
We followed Andy and Kate’s progress up the steep track until they disappeared. We would be following soon. It was now very warm and so the layers were dispatched for the ascent of Carn Dubh ‘ic an deoire at 750 metres. It was slow methodical short steps which led me to the first cairn where i stopped for a breather. 706metres. Here i caught up with Robin Evans and Steve Croft. We had a chat for a few minutes and they were away whilst i hung on for the others.
We topped 750metres at the trig point together. It was a bit of a surprise to see the double fencing and electric current. We knew we had to get over this obstacle at some point. 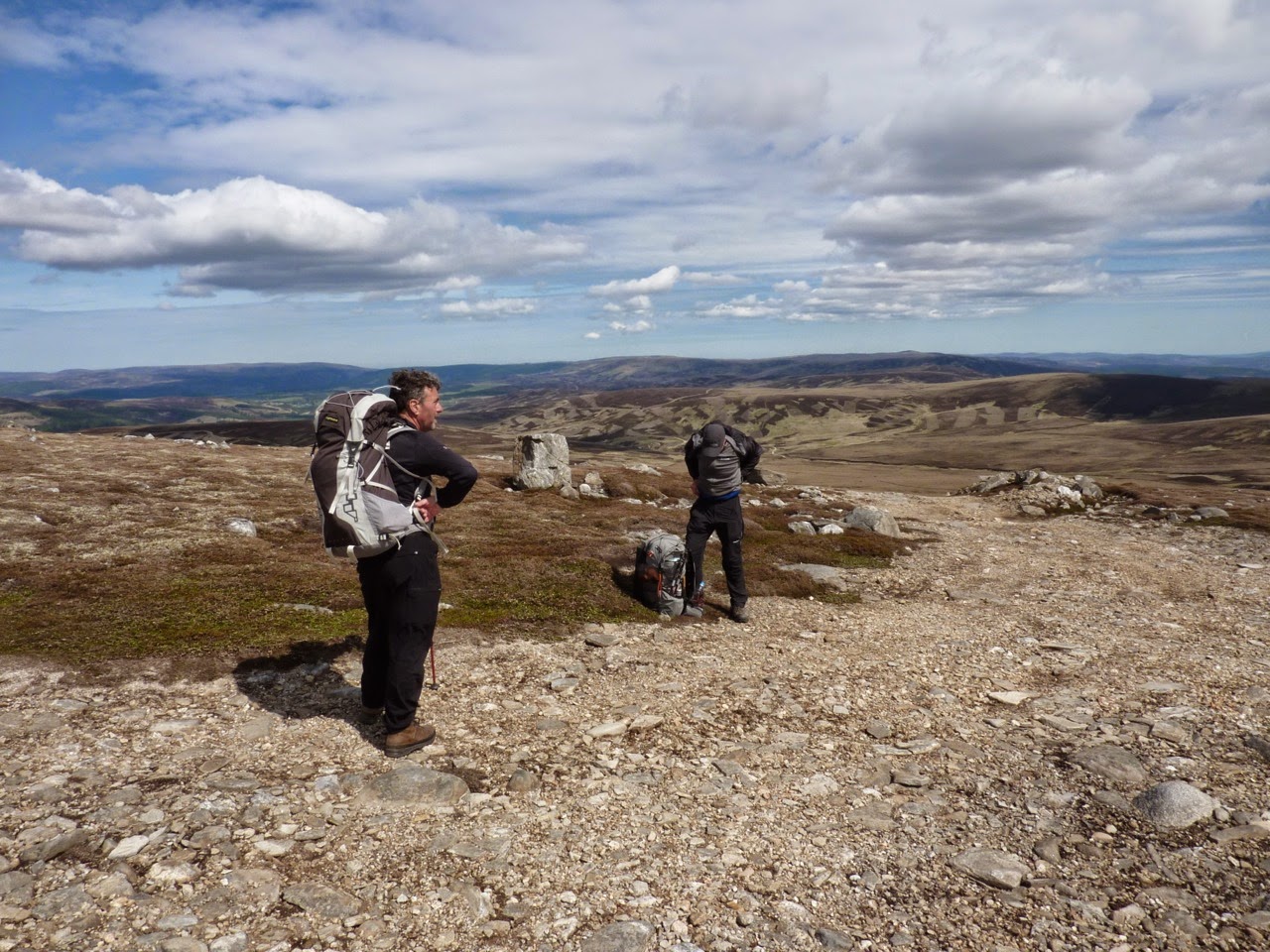 Steve and Robin at point 706M 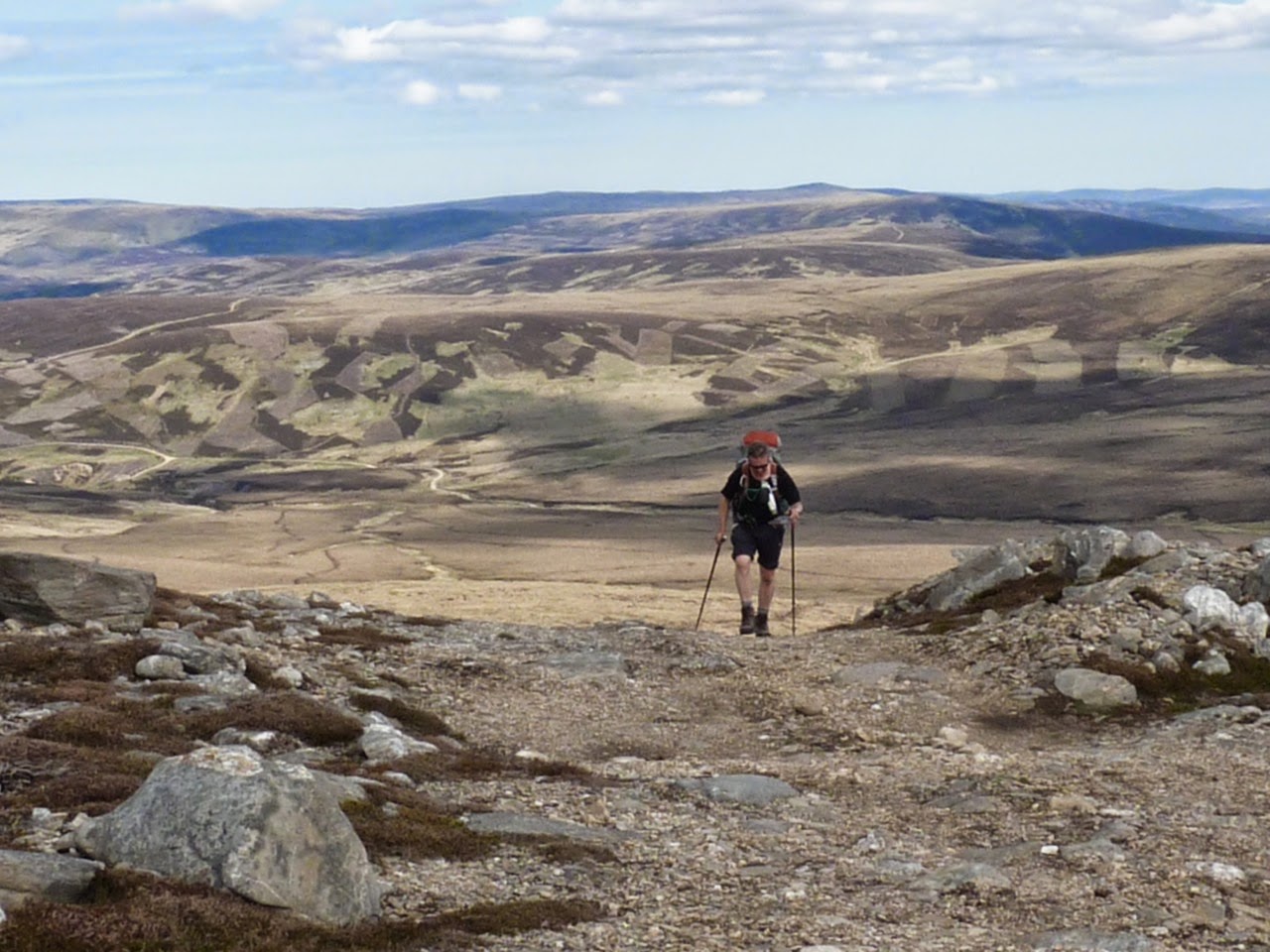 JJ reaching 706M.
Patchwork is burnt heather so that the grouse have the new young shoots to eat.
And then they get shot of course. 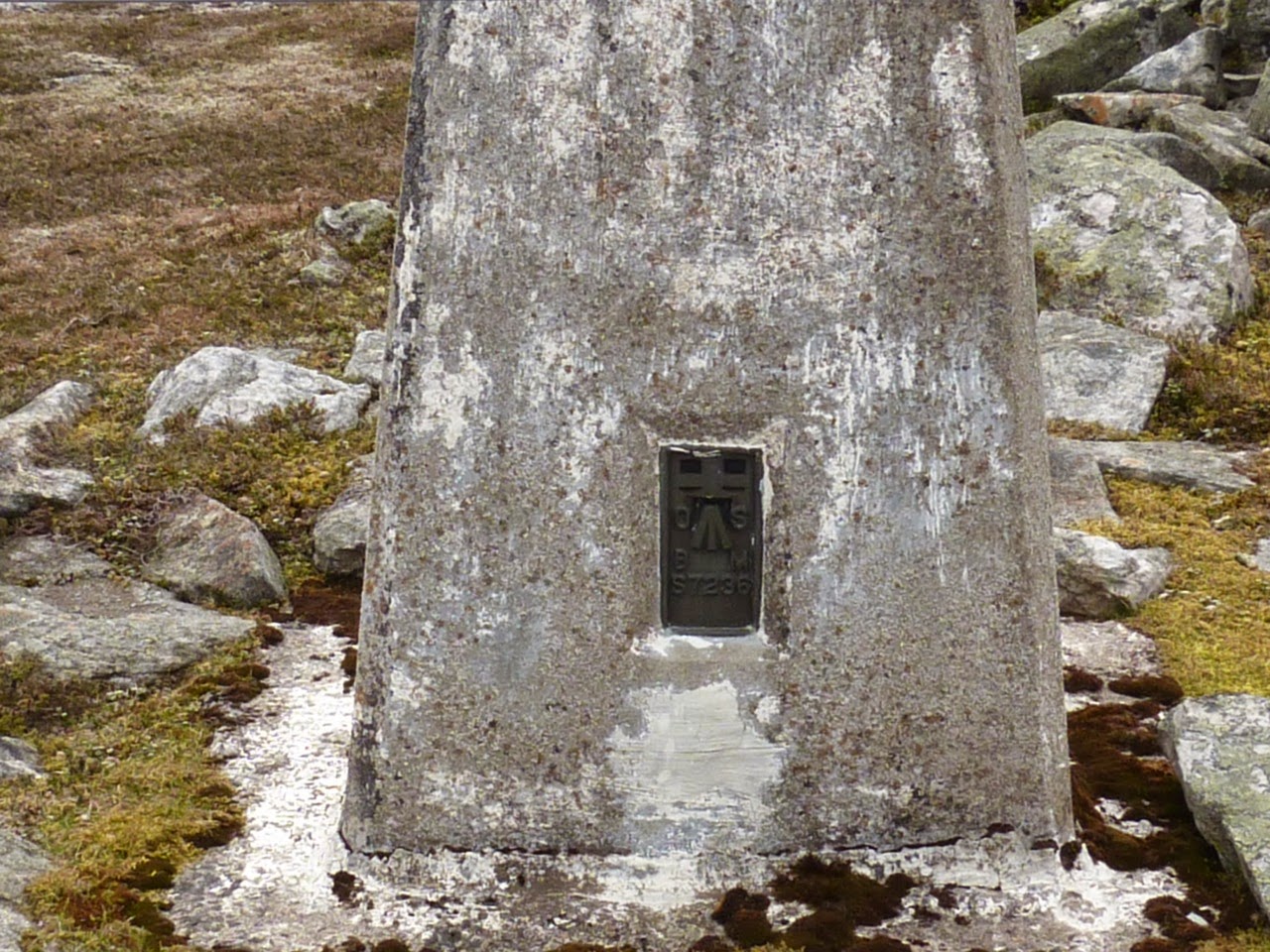 Trig point on Carn Dubh 750M.
We could see our route onwards to Red Bothy and it didn’t look difficult. As it happened it was not that easy and i was pleased that we had visibility and dry ground under foot. We spied the fence line for any stile over but we didn’t see one. We checked the electric current but it was switched off. JJ always carries a multi meter for this purpose as well as a car battery and portable welding kit.

Over the fence we went and headed in the general direction of the LRT down to Red Bothy. Lots of peat hags to negotiate and i was glad to reach the LRT. I think we strayed a little too far SW, hand railing the Allt an Tudair when i think now it would have been easier to follow the fence line down to the corner and then take a bearing to point 652 metres. 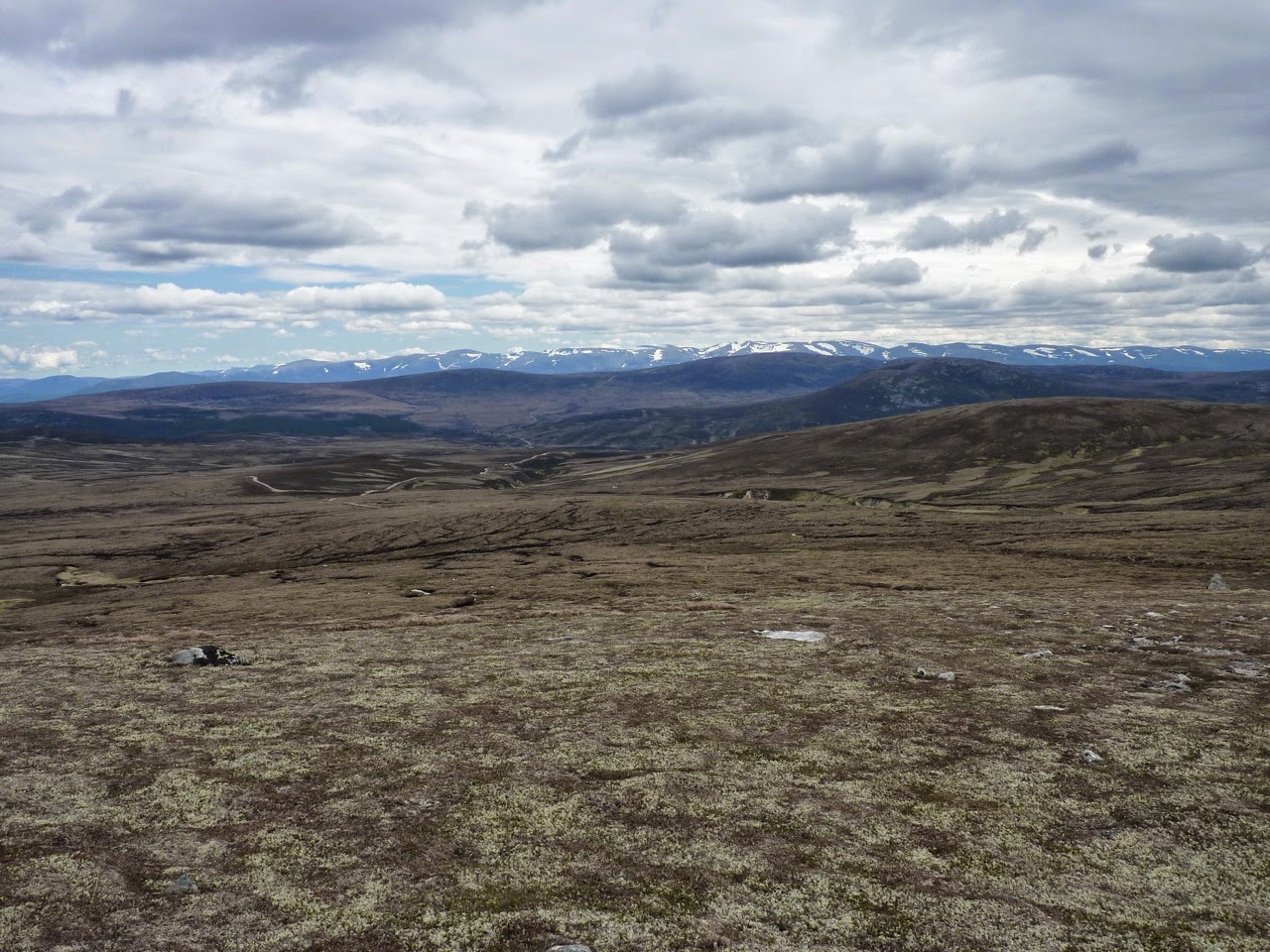 The way off Carn Dubh with the LRT in view to Red Bothy.
Another brew at the bothy and the night spot for Andy and Kate. We still had the Burma Rd to do to take us into Aviemore for our overnight spot. 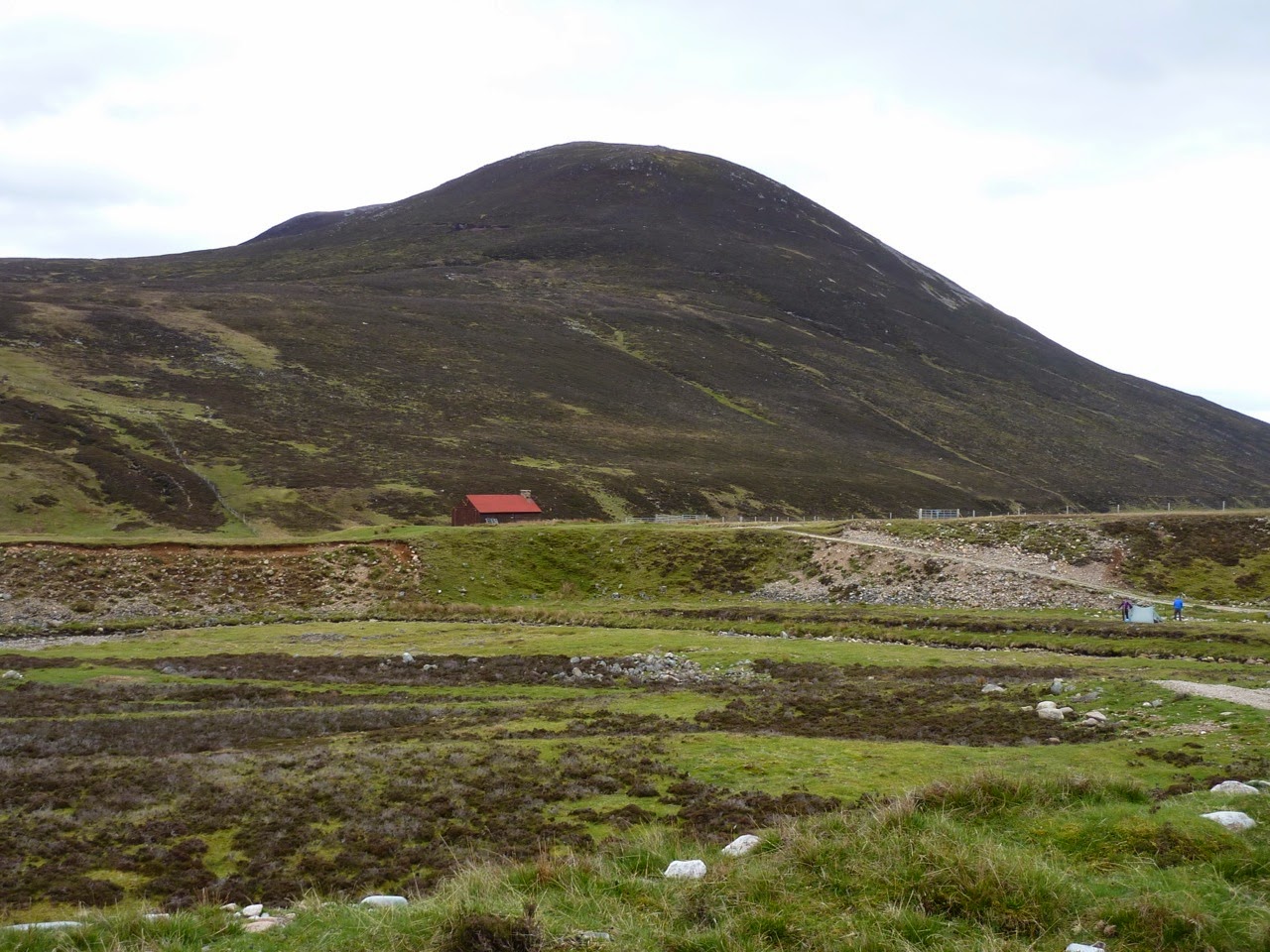 Red Bothy and Andy and Kates camp.
The Burma Rd is a drag, a long LRT that gets steeper and steeper as it goes. It was just a matter of head down and go for it. Croydon kept with me for most of the way but at one time he said he was going to get me drug tested as i just kept going. 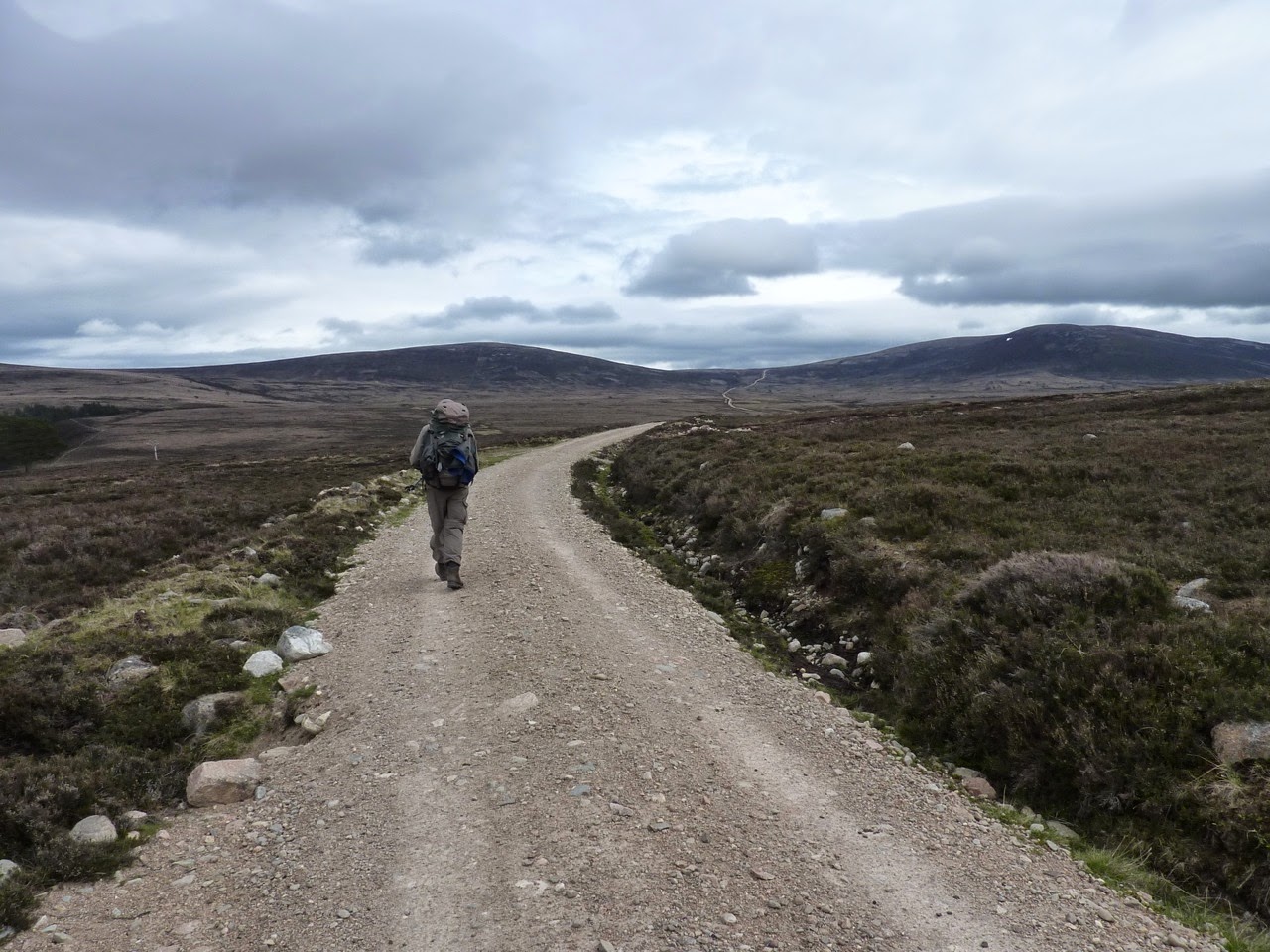 Croydon ( Mick), on the Burma Road. Looking across to the Cairngorms from the watershed on the Burma Rd into Aviemore.

When the watershed was reached i stopped but unfortunately the wind had really picked up. JJ and Viv were quite a bit back and i wondered how Viv’s feet were doing. I donned my outer shell gear to stave off the cold. Croydon reached me and i said not to wait but carry on as he was heading to the campsite in Coylumbridge whereas we were staying in the bunkhouse in Aviemore.

I found a peat hag to get down into which protected me from the wind as i waited for the others. Viv appeared and i asked how her feet were, her feet were sore but she knew Aviemore was her last day and a train ticket home. She’s a battler that’s for sure.

Just as we all set off down the other side it started to rain. We had been watching it sweep in following the course of the A9 road. It wasn’t prolonged but quite a heavy shower.
Back down at the tree line Viv remembered we had to take a left through a gate and sure enough within 50M we did just that. A nice backroad leading parallel to the busy A9.

This backroad led us to the old route of the A9 which we followed for a short distance before inevitably having to join the wide grassy bank adjacent to the A9 and across into Aviemore.

We found the bunkhouse and JJ’s parcel was there. I got sorted in my 6 berth room, showered and went next door for food.
We all thought it was very expensive and considering that its bunkhouse accommodation it seemed a bit out of place. Ok have a fine restaurant menu (the food was good quality but not enough of it) but have pub grub menu too. My evening meal cost £28 plus a few beers and accommodation costs and that was £60 gone.
It was also really difficult to speak to any of the staff. Most of the time nobody was there or else they were working in the pub next door. As nice as the bunkhouse was i would give it a miss next time or eat elsewhere as Aviemore has numerous places to eat at reasonable prices for backpackers.
Winge over! 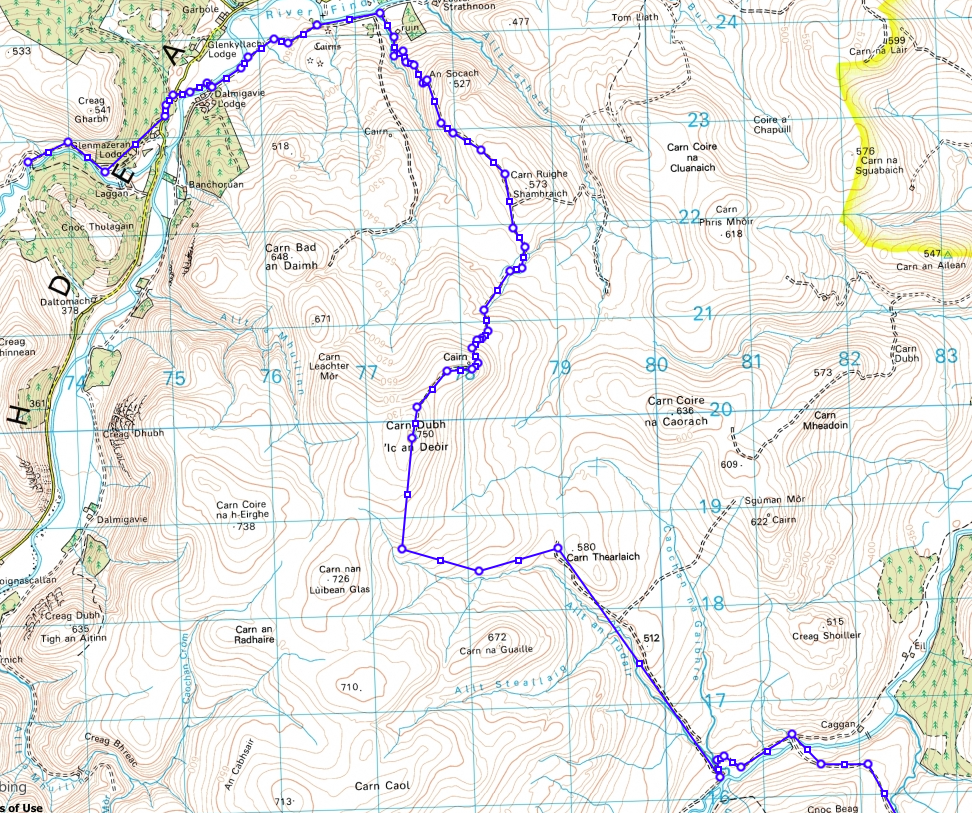 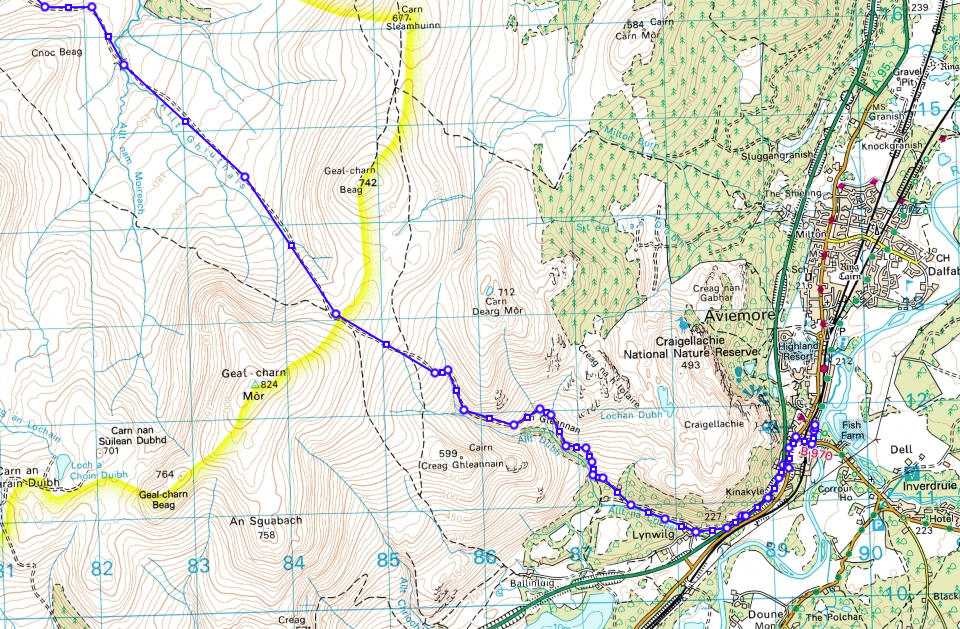 Any day that starts with bacon can't be that bad! Looks like a great day's walking and some decent weather too!

I agree. Apart from the boring Burma rd it was a good day. The decent weather keeps spirits up of course.

Ah - I know now why I found the Burma Road quite easy. I'd previously had a half day to the Red Bothy, near which there is great secluded camping.
I'm glad JJ found his parcel - I was a bit concerned about that. Shame about soulless Viv...

Hi Martin,
Yes there was no problems with the parcel. We had done quite a bit before the Burma Rd so it was a bit tiresome but if we had been fresh then i imagine we would have not noticed it so much. Viv was a star, i’m sure others would have given up miles ago.