Said our goodbye’s and thanks to Gerry. It was 8.00am. Still raining but not heavy. A very short road walk and then over the River Carron bridge to a LRT which had been widened to allow HGV’s working on the new hydro scheme. There are a number of LRT’s but we chose the right one and followed a good route along Allt a Chonais to the very small bothy at Glenuaig Lodge. Here we found Martin Angell, Graham and Marion Dunsire already installed and enjoying a brew. There were also a couple of others just leaving and also 3 others behind us. (Frank, Laurence and Lesley, JJ said)
We decided to have a seat for 10 minutes and a chat with the others.

As the 3 who were behind us arrived, we up’d and left leaving them our seats. The onward path was a little boggy but the views all round were spectacular. In a short time we met Croydon (Mick Hopkins) who said he had been across the river and part way up An Crom Allt but the path was non existant and horrible and so returned to the Glen track.

My worry for this morning was that the River Meig was in spate. We had been told this was the case by challengers at Gerry’s. We kept a check on the water level as we progressed but it didn’t seem too bad considering it had been raining for 24 hours. When we approached the ford on the path which leads up to Creag Dhubh Bheag we decided it was a good place to cross. Martin Angell caught us up here and crossed with the 4 of us. It was not a problem getting to the other side and at worst it was just over knee deep. We noticed that further along the river did get more menacing so our choice of crossing point was a good one. 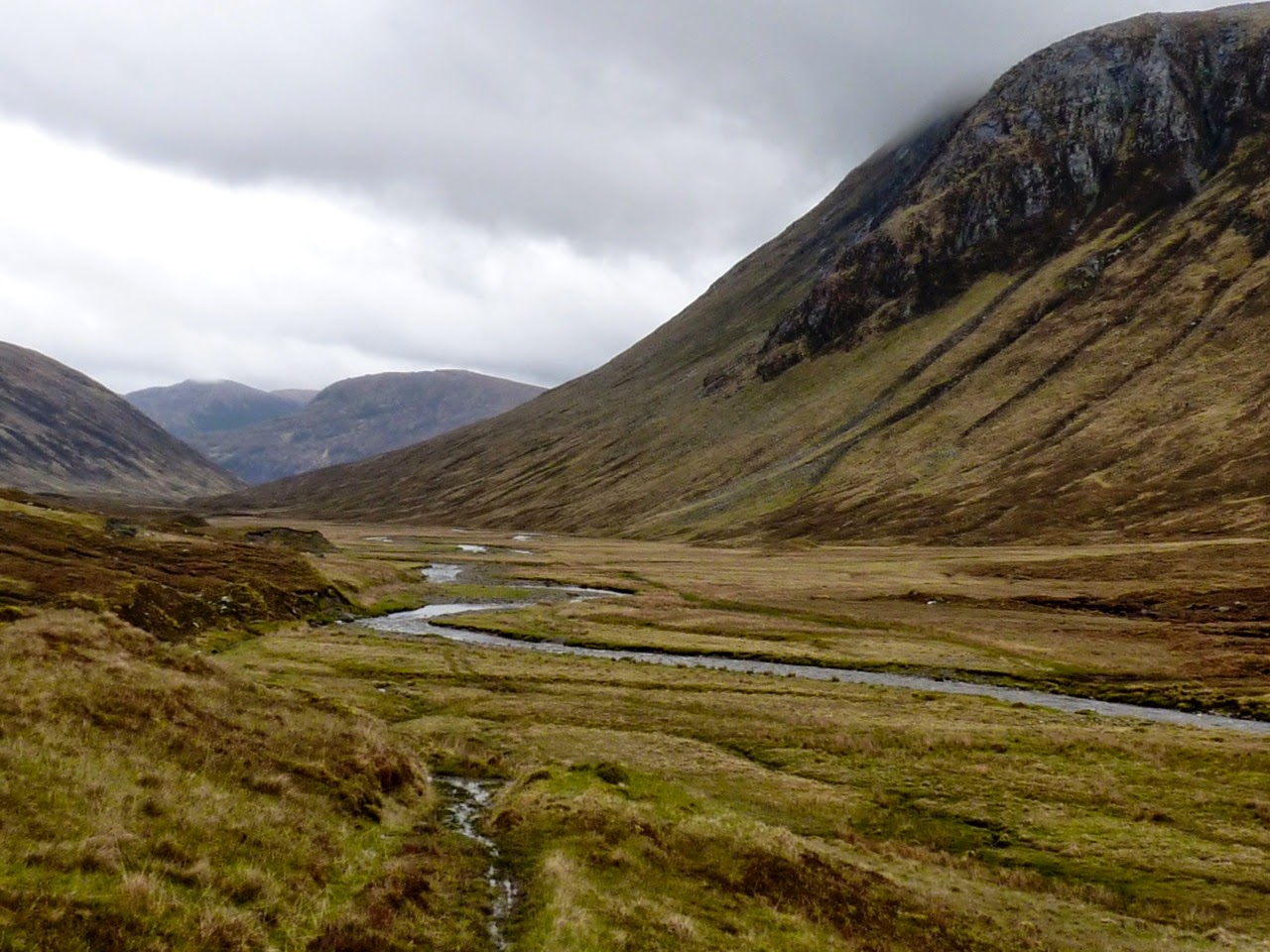 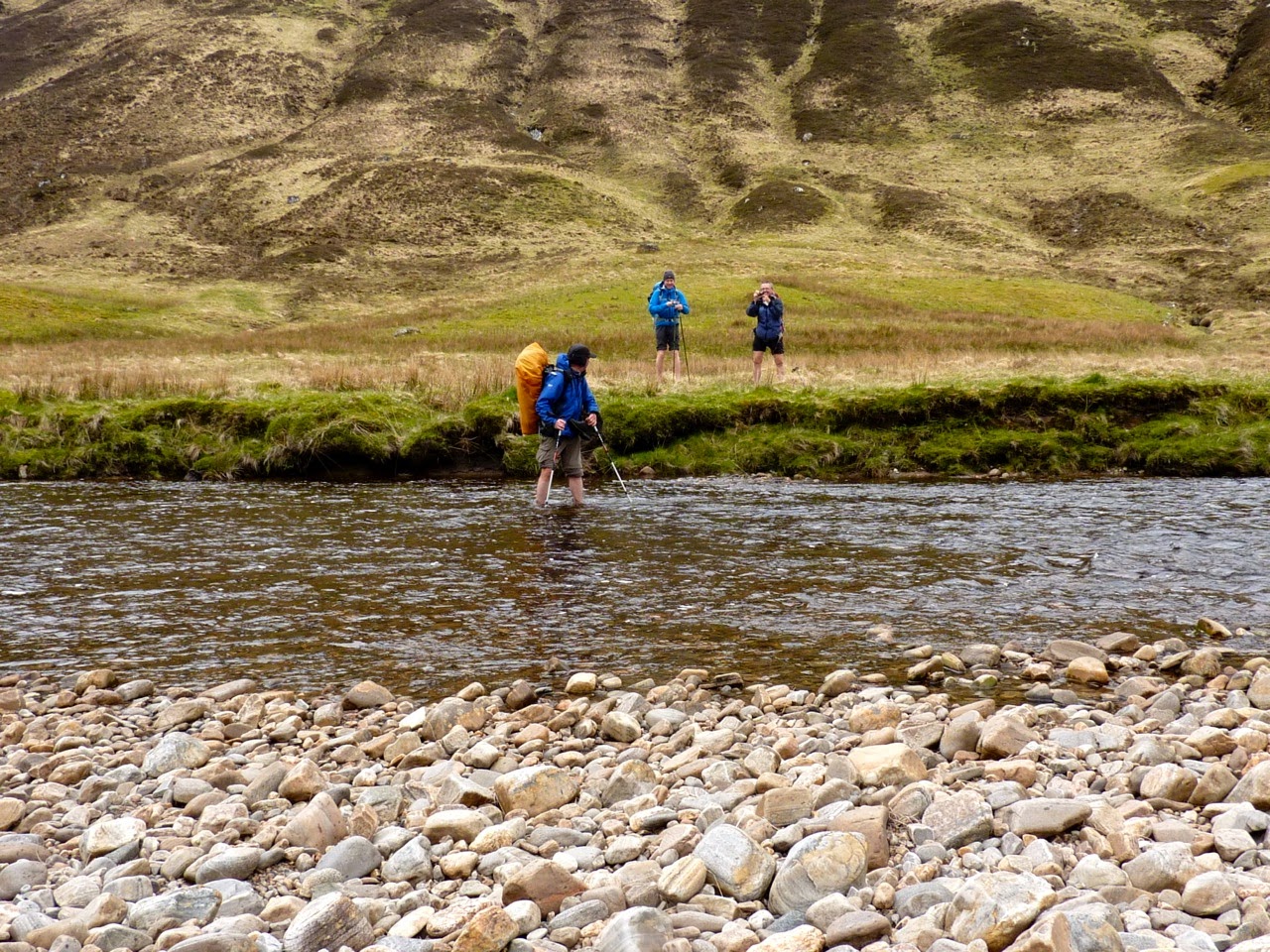 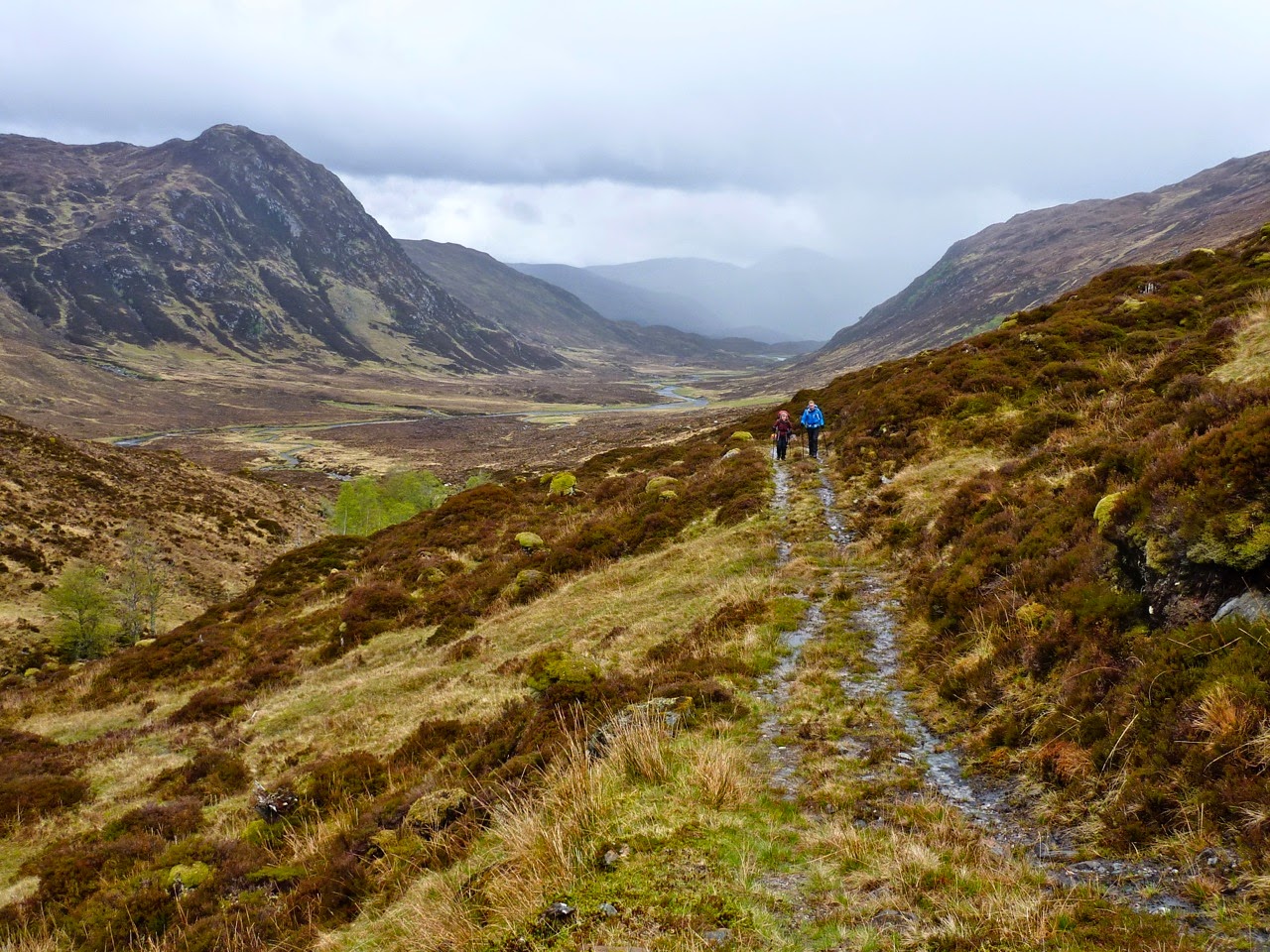 The track up Allt An Amise with rain in the far glen. It wasn’t long before the rain was on us again. 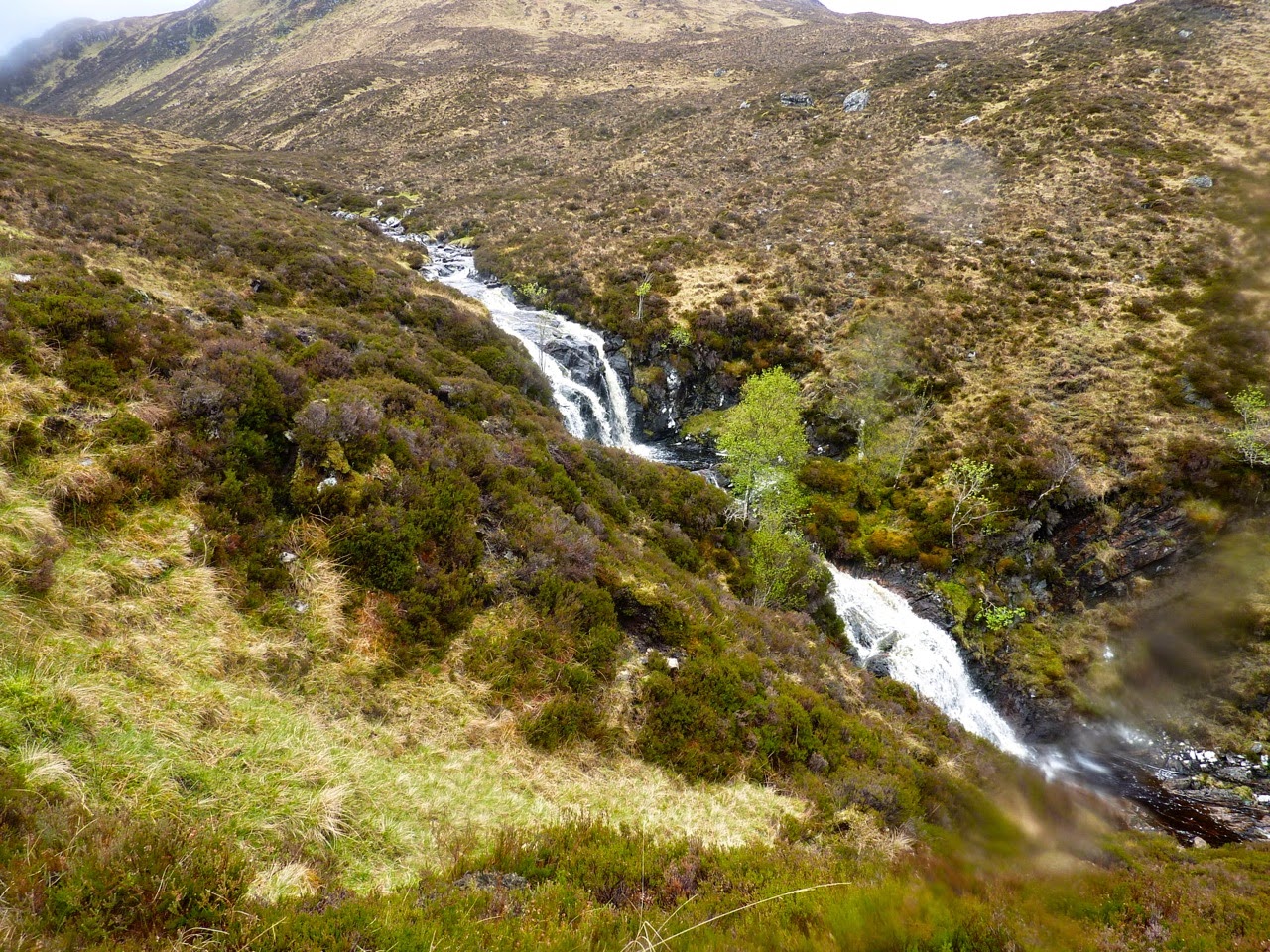 Waterfalls on the Allt An Amise. 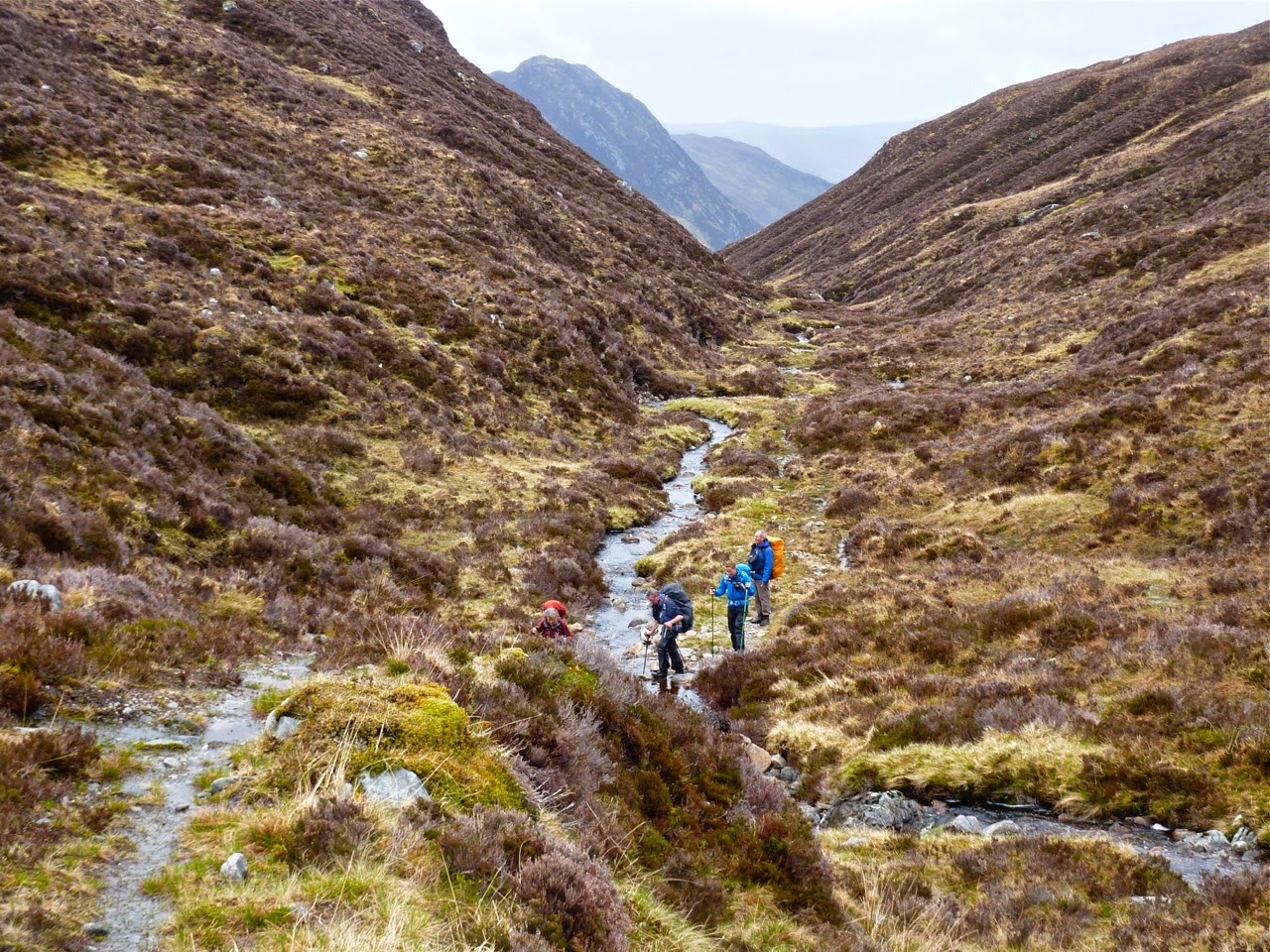 One of numerous bank changes. 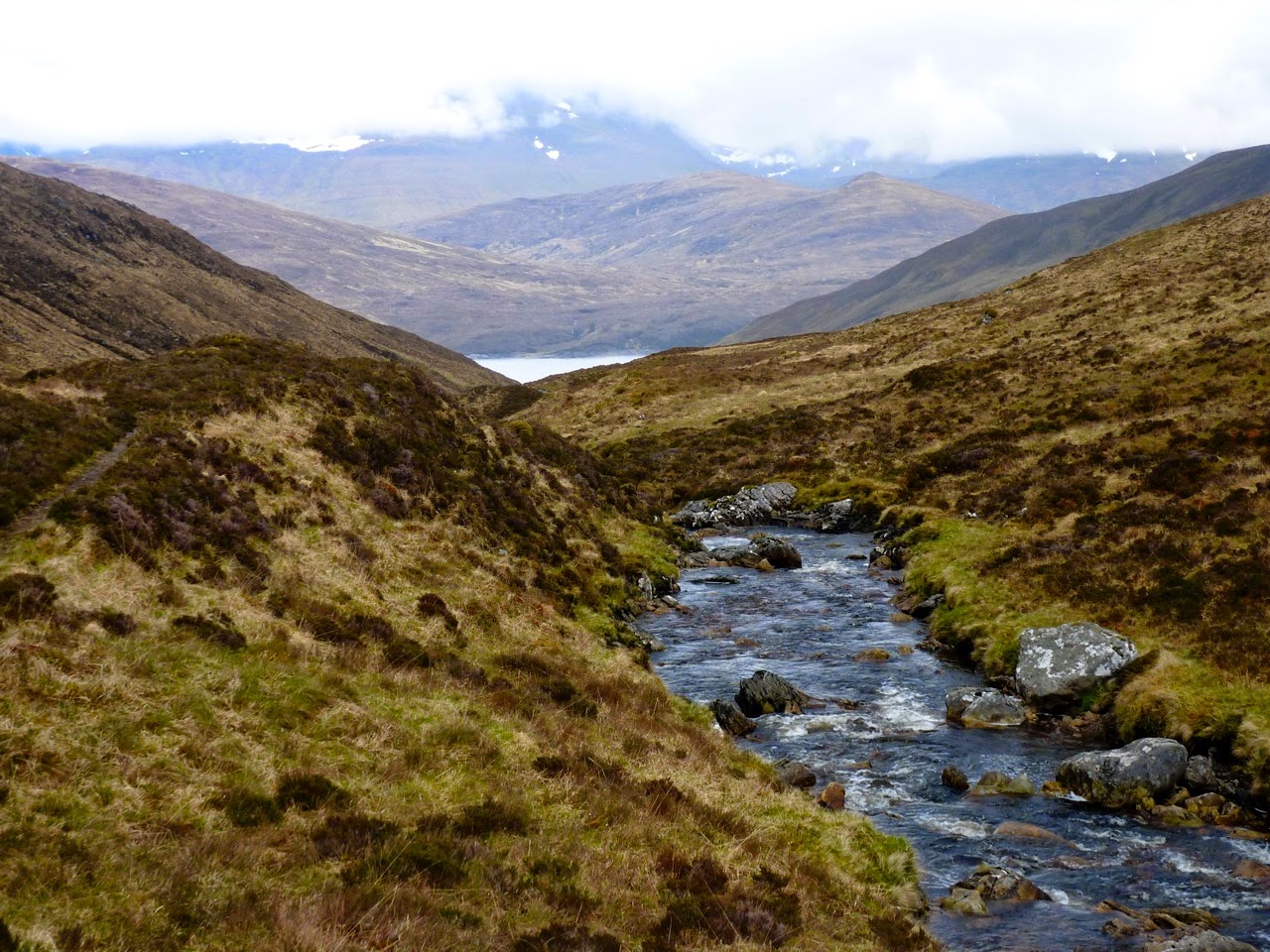 Loch Monar coming into view for the first time.
The crossing from Meig to Monar was quite nice and the paths reasonable although easy to wander off on deer tracks in bad weather. The trick is to stay with the river on both sides of the watershed. The rain was quite heavy at times but was intermittent.
I remember as the Loch came into view that Viv said she was glad to see it and i admit i was too. I felt quite tired. We were heading for a recommended camp spot in the sheep pens at NH163425.
When we arrived there the pens didn’t look that welcoming and much of the area was boggy. We spotted a couple of Akto’s further down near the loch shore and so headed off there.
I said hello to the guys and then sought out a spot for the Duomid. Although the footprint of the MLD Duomid is large, the actual 1 man inner tent takes up no more room than an Akto and so it was easy to find a decent place to lie.  NH164423.

JJ and Viv found a place close by as did Martin but Mick decided to go over the footbridge and camp on the opposite side of the burn. The wind picked up quite a bit during the evening and i cooked in the porch with the door open. The Duomid copes with strong winds very well and i was quickly learning the best way to pitch it.

There was no socialising that night. I think we were all tired. In fact i slept really well and it was only the noise of Martins door zip opening that woke me. Thankfully it was around 6.30am. 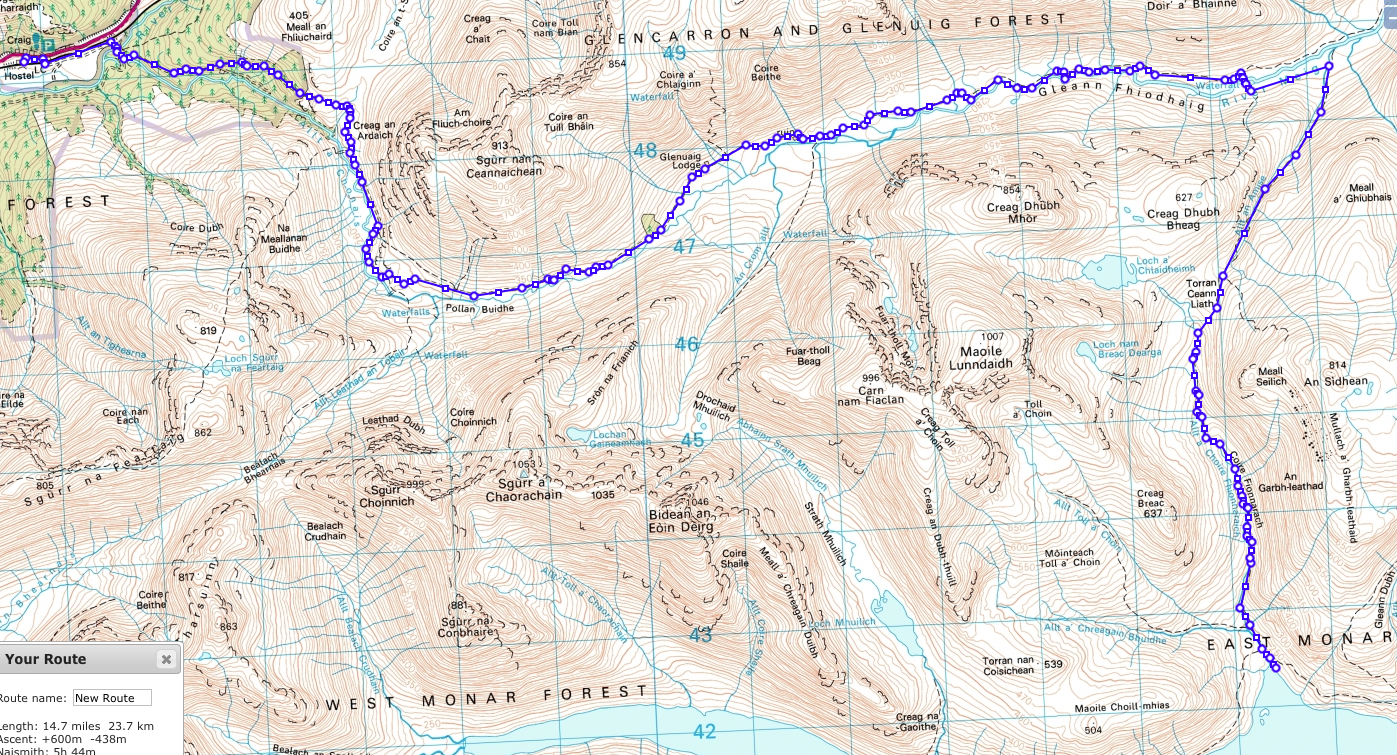 Even with the rain i enjoyed today.

Thanks very much. Glad you dropped in for a read.

Haven't had chance to drop by your blog for a while so its been good to catch up. Definitely looking forward to reading more about the TGOC

Great read Alan.....Good job the meig was lowish, it would be a nightmare after heavy rain.

Thanks David. I think you are right but at the point we crossed it could have risen another foot and we would have been ok. It being quite a wide fording point.