I slept well again and didn’t notice at all what a cold night we had had. My PHD Minim 500 sleeping bag doing the job well. I pitched as i usually do, so that the rising sun warms the tent as soon as possible. I was glad i got it right last night as the tent was not only frozen solid but had a sheet of ice on it.
I looked out of the door way and saw some already for the off and others with steam rising vertically from the stoves in their porches. Many were still asleep.
The ground white but rapidly turning green as the sun made progress across the field. As i went for a wash i noticed the temperature drop from where i was pitched to where JJ and Viv’s tent was. It felt like 10 degree’s lower, it probably was only 2 or 3 but definitely noticeably colder. 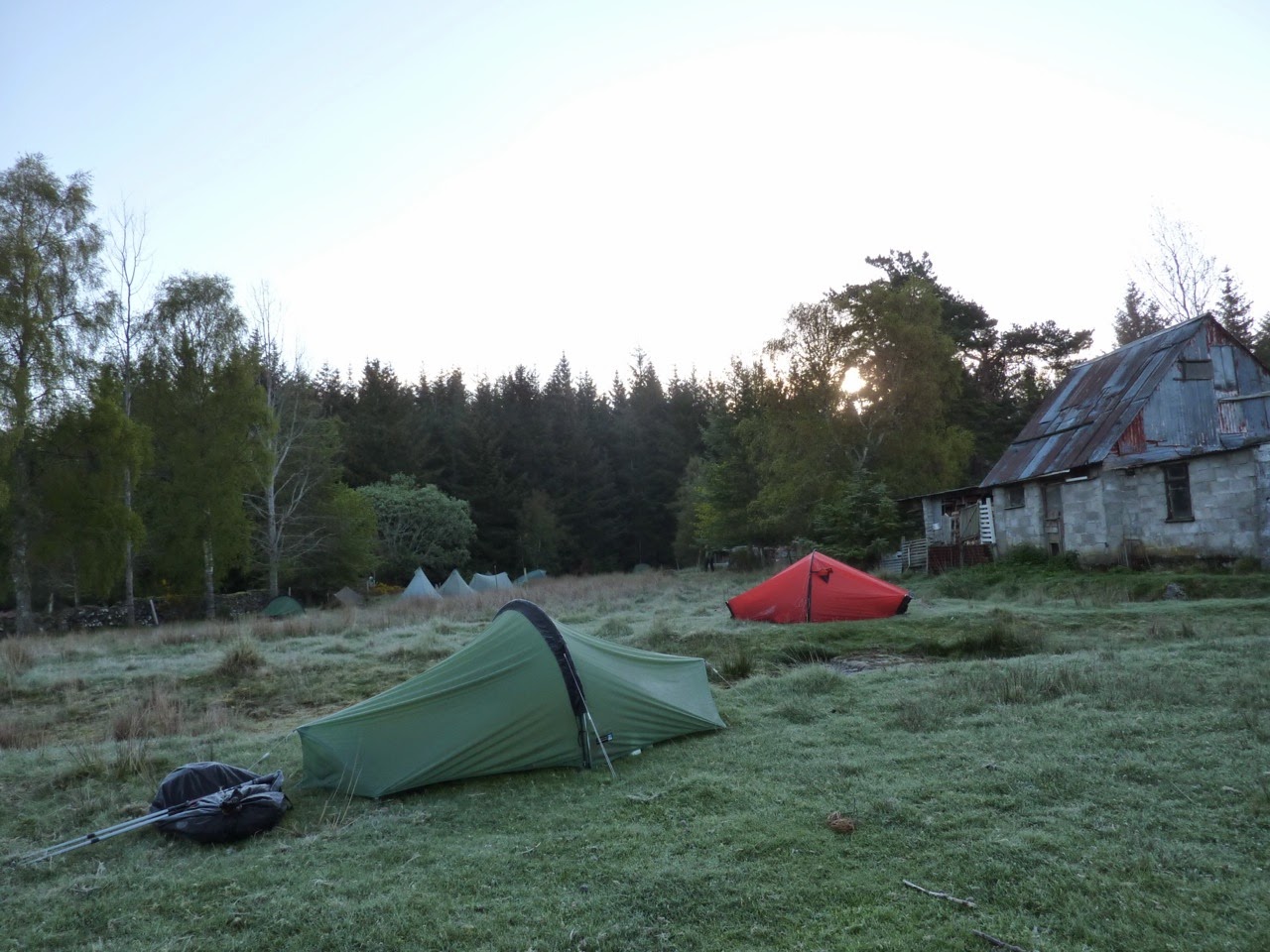 Camp Sutherlands, just before sun up.
As life stirred i made my way into Janet’s kitchen and everything was set up for breakfast. Cereal, orange juice, green tea, full hot breakfast, coffee, toast, marmalade or jam. A really wonderful start to a warming and blue sky day.

Packing up, the tent needed a wipe down again but the sun had done a good job and evaporated most of the condensation. Janet had an outside table where i sat and dropped my sack until JJ and Viv were ready. More tea was produced and Alex stood playing marching songs on his violin. What a superb way to start off walking again.


Croydon set off up the road and it was difficult to prise JJ away from the music. But we had to go and eventually we did. We said our thanks and goodbye’s to the Sutherlands.

Our route started on a road walk along what i believe used to be a very quiet backwater but today there were quite a few logging and aggregate trucks up and down. The road was being widened in lots of places and we guessed it was for the wind turbine hgv’s. Still it was pleasant enough and great to walk and listen to many Curlew’s.
The time passed quite quickly. We caught Croydon up and we walked together passed Dunmaglass. Turning off the road and heading up alongside the River Nairn we found a good spot for lunch. The weather warm and bright and the sun sparkling in the river. Just the sounds of the Oyster catchers and the steam from the stoves. It was a nice time. 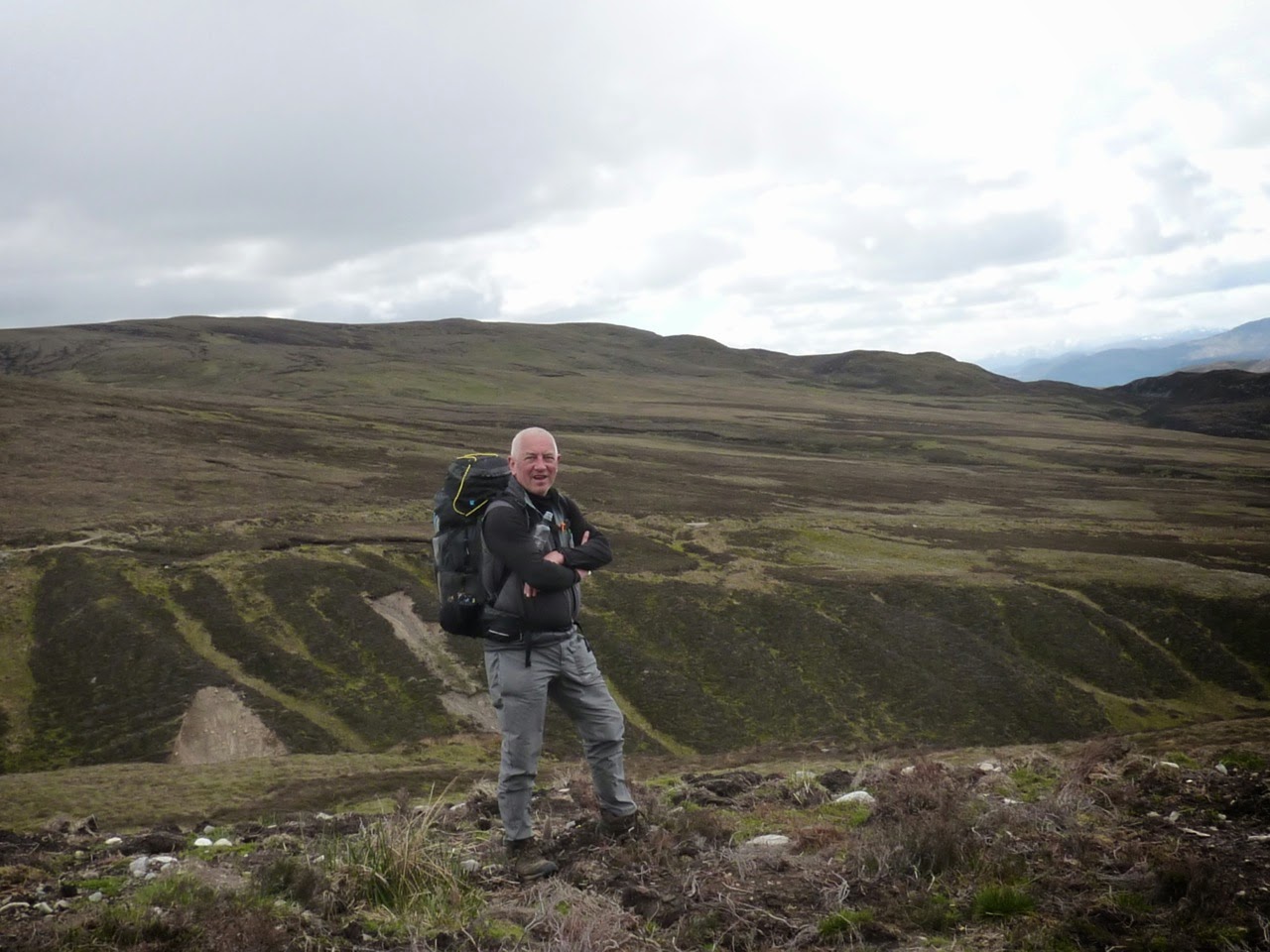 On the way up the young River Nairn

On a good LRT we made our way, sometimes steep, upwards into the Monadliath. The ravine enclosing the waterfall of Eas na caillich, deep and full of landslips. Eventually we came to the bothy at 615 metres. JJ collected some water and we made use of the large bench table for a brew and a rest.
Ten minutes later we were joined by 2 other challengers. 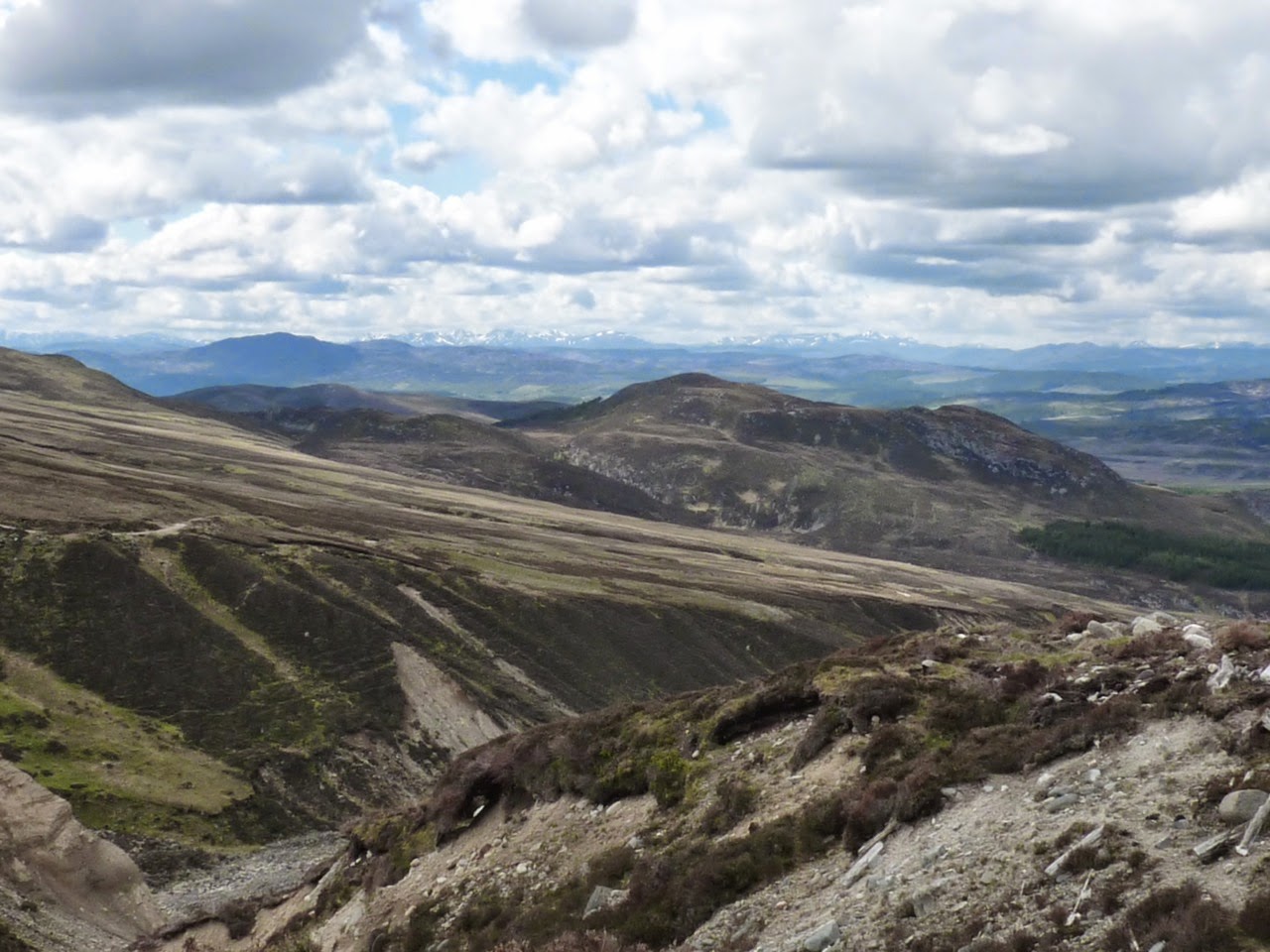 The grand scenery beyond the Monadhliath

Across the top there is no path much after the bothy and so we set a compass bearing of 97degrees to pick up a burn which we could handrail down to another LRT which led into Glen Mazaran.
As it happened the weather stayed perfect and the burn was pretty easy to find once we had crossed the peat hags complete with new shooting butts. A nice light green grassy pathway stretched out for us to follow, the burn being mainly deep down, running underground. Quite a contrast against the black and brown peat hags on either side. 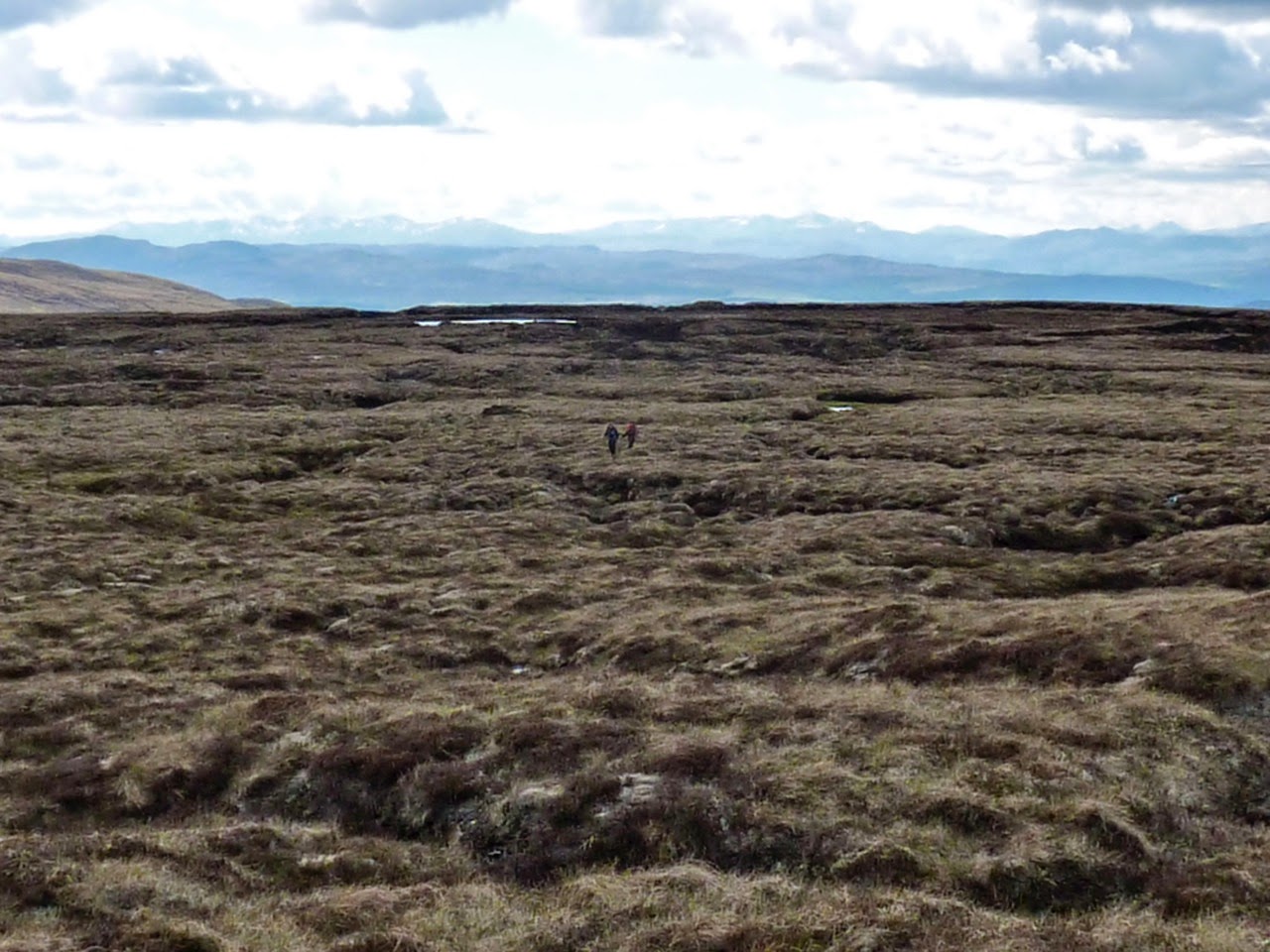 Once on the LRT the going was easy and rounding a bend spotted 2 tents. Even from a distance it was easy to spot the Tarp Tent Stratospire and not far away a Hilleberg Akto. So we guessed Andy and Kate and AN Other. As it turned out it was Rob Jones.

Heading away from the tents and towards us on the track was the proprietor of Cafe Akto. He wasn’t going to let us slip past unnoticed. (Not that we would).
Greetings over, Mike said that he had pitched a mile away and he had plenty of beer and bacon panini’s. So away we went.
After 20 minutes we asked where have you pitched and the answer was "about a mile away." Eventually we spotted the Akto by the bridge and again Mike said, “There ya go, about a mile away.”

We pitched beside the river on a bit of a lumpy spot but it wasn’t too bad. Many challengers came and went, sampling the contents of the beer barrel and the frying pan. The charity box was getting well stocked with notes.
A good evening was had with plenty of chat as we tried our best to empty the barrel that Mike had no plans of carrying back to the car with any contents in it.

Eventually the cold got to everyone. It was bitterly cold and standing around drinking cold beer whilst your hand was shaking was not good.  Bed time. 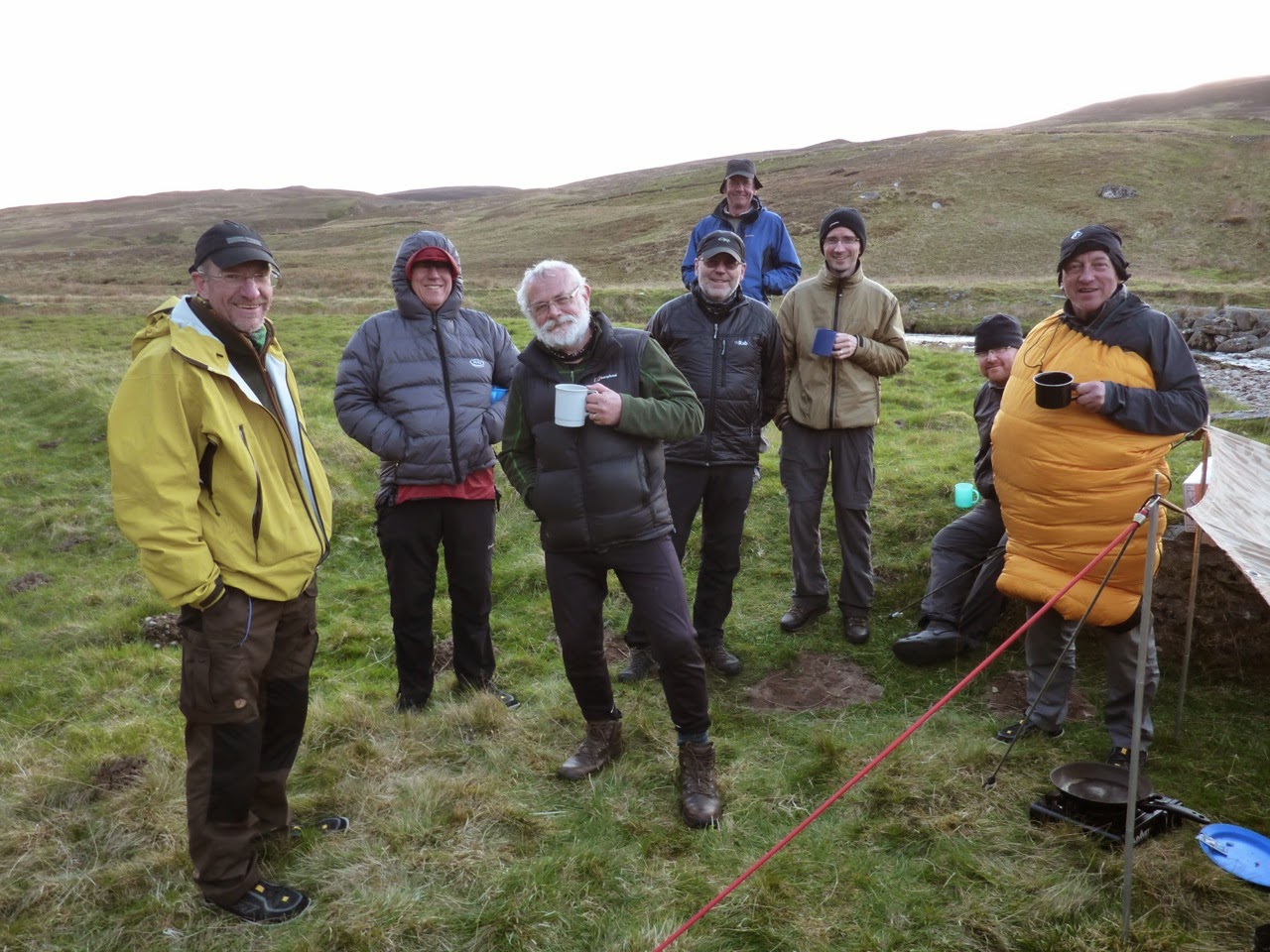 Thanks Mike for doing Cafe Akto. 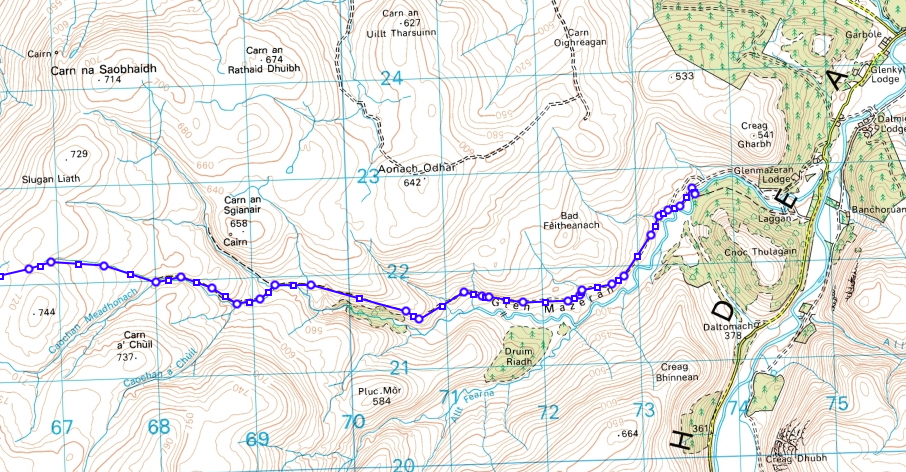 Wow
I've finally caught up with my reading.
It sounds like you're having a wonderful time, Al. A nice sociable route too.
Looking forward to more, Sir!
:-)

Yes, I think day 5 was a good one for most of us. Another excellent report Alan.

There are lots of challenge blogs to read Al. We had a very sociable route. That was the plan.