Last evening after having my dehydrated Spagbol from Expedition foods. I dodged the rain showers and headed for the Screes Inn for a beer or 2. There were a few local faces in that i recognised and it wasn't long before getting into a conversation.
The Wasdale Head Hotel micro brewery has now moved to Egremont after Robinsons who have taken over the WHH didn't want it. Why are Robinsons moving into deep lakeland i wonder.
The guys or one of the guys who ran the micro brewery is at this minute taking over the Horse and Groom in Gosforth. That will be a pleasant change as the pub has done nothing for ages and is known locally as the Horse and GLOOM.
It was good craich in there and it passed the evening well. I waited again for a break in the heavy showers and then headed back. I didn't make it back before the torrent started again.

Once in my sleeping bag i was dead to the world until 1.00am when i was wakened by very heavy rain and the wind had picked up. I lay there listening to the heavy drops echoing off the flysheet and realising that sooner or later, now that i was awake, i would have to pay a call of nature.

I didn't sleep too well and and at 7.15am i stuck my head out of the door. It was a little brighter than yesterday but still raining lightly. My route over to Eskdale was coming into view as the hill fog drifted over the shoulder of Whin Rigg. 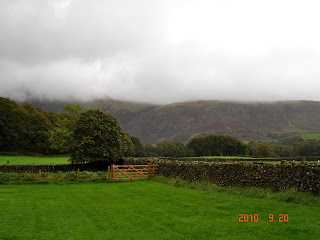 I knew that my way to Eskdale was going to be a boggy walk with all the rain of the previous 24hrs. so i wasn't full of enthusiasm.
I had my Muesli and the sky was starting to clear from the west, showing some patches of blue. The rain had stopped and my enthusiasm was improving. The sun came out and steam was coming off the farm roof as the water evaporated. It's looking good i thought.

After 20 minutes of drying out the tent as much as i could i packed up and was away for 10.00am.

Just as i got to the crossroads between Wasdale Lake and Nether Wasdale i passed an American backpacker. He had the biggest rucksack that i had seen in years, his rollmat was bigger than my entire baggage. He had spent the night at wasdale YHA and was heading for Whitehaven via Gosforth where he could catch a bus.

Onwards i plodded and half way up through Latterbarrow Forest i startled about 50 Pheasants. The noise  they made as they scattered in all directions was just incredible. 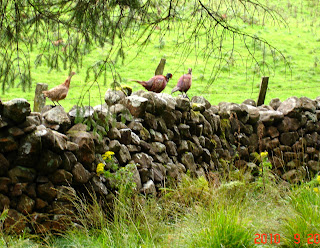 On leaving the forestry the path up to Irton fell was very boggy as i knew it would be but i managed to get through it without going knee deep.
I stopped for a breather part way up and looked back. The weather was very quickly improving and it was good to see Wastwater although it would be disappearing from view very shortly as i made my way higher. 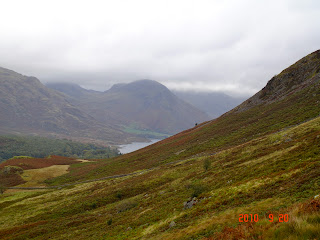 Once the shoulder of the fell side is attained i looked for the gate which leads into Miterdale forest. It looked very dark and foreboding. The path was knee deep in places as i could see from the footprints of others that had preceded me.
I moved into the rows of trees trying hard to avoid the pine needles and the peat bogs. The ground proved to be much firmer here so i negotiated my way through without any problems. 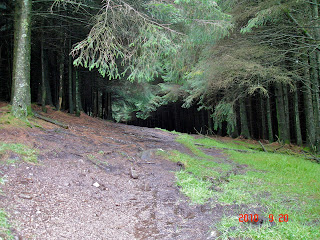 In around half an hour i crossed the bridge at the River Mite which was running fast and quite high. 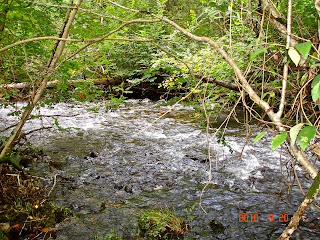 Another 10 minutes and i was at the road side in Eskdale Green. Their is a small car park, a shop and a Loo at EG so i decided i would have lunch. I got some water from the tap in the Loo and used my Super Delios water filter for the first time on this trip. I had brought 2 small meths stoves, one i had made and the other was the Gram Weenie i purchased from Mark in Australia, i wanted to try them both out.

I will do a gear round up and upload the photo's at the end of the walk for anyone interested.

Post lunch i packed up and headed off back up the track i had just come down but veered off behind the Outward Bound Centre for Fell End. It was now a lovely day and quite warm as i marched on through some very long, wet grass and ferns.
This was a track i had been meaning to take for some time but i had never done it before. I took the NE track around Fell End and the views up Miterdale and across to Muncaster were very nice with some clear breaks in the cloud.
After crossing a stile the path splits NE and SE, i took the SE path towards Hollinghead Crag. Where the path on the map takes a North turn, i missed it, and continued on a very good path following the wall (which isn't on the map) which eventually meets Blea Tarn. It wasn't long before i realised that i had gone wrong but decided to carry on this route and take an alternate path to visit Blind Tarn and Siney Tarn. I decided that Blea Tarn being the largest of the tarns is probably the most popular and thats why a short cut path has appeared. But why such a significant path has not made it onto the latest OS map is odd.

I was a little surprised at what a large sheet of water Blea Tarn is and it's an ideal spot to wild camp but don't tell anyone. It's also surrounded by some minor summits which makes it quite imposing. I will come back here again soon.
From Blea Tarn the path continues NE up BleaTarn Hill and onwards for about a mile or so to meet the track heading S to Boot village and Hollins Campsite. I had already decided i was going to stay here after Robin AKA blogpackinglight had reported that i should try it. 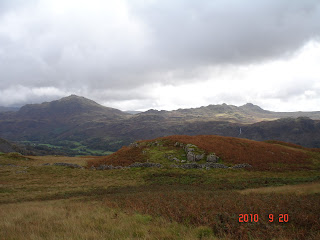 Today had been a surprisingly lovely day, not a particularly long walk but interesting with plenty of up's and downs supported by splendid views all round.

Entering reception at Hollins i was taken back by the high standards. It had a good shop with wines and beers and plenty of spare camping gear. It was good to see that they stocked all types of fuel too as this can be an issue for backpackers sometimes.
I paid my £7 something and had a look at the showers. Just as good as you can wish for and spotlessly clean. I was impressed.

The chap in reception said i could pitch wherever i liked so off i went for a look round. I was therefore surprised to see just how much standing water was around and also there was quite a few large areas of bare earth where tents had been pitched for too long and killed the grass. These areas were now muddy messes.
I paddled through some water near to the water taps area and headed for the only sloping area on the site. I found a dryish spot and pitched.
There was only a few people about. 3 tents and a couple of motor homes/trailer tents. 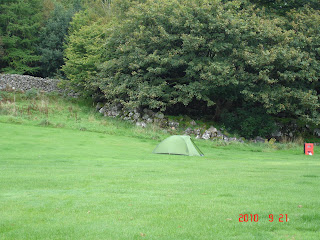 It is a lovely site but they need to improve the ground drainage a good deal. Quite surprising when you consider just how much money has been spent on superb facilities that they seem to have ignored this important part.

My evening meal was Real Turmat beef stew and excellent it was too.
I had a quick pint in the bar at Brook House but there was no conversation and no atmosphere so i left. The food looked delicious though and the beer was good with a number of choices.
I walked up to the Boot Inn which used to be called the Burnmoor and found a much better atmosphere where the staff were very chatty. Especially as the Eskdale show was pending. The beer was a bit pricey though i thought.

I turned in at around 10.30pm and it was dry and calm. Hopefully tomorrow will be just as good.
Posted by AlanR at 11:49 AM

Is there a part three?

Mike,
Yes there is a part 3 looming. It was all done at a very relaxed pace. Why do we need to rush around in such wonderful country. Savour it. Thats my excuse.
Hope you have a good trip to the Berwyns.