Last night in Seathwaite.
I had been invited to supper at Tina and Alan's and it was a lamb curry enjoyed with a nice bottle of red. Absolutely fantastic. Although Anthony from Turner Hall farm is never impressed that we curry his lambs after all the work he has put into getting them in good shape.
We wound him up about this later in the Newfield, but we left the pub together still friends.

Sheila is picking me up today, just before lunch so there was no rush to pack up.

As i made my way to the loo this morning i passed a young lady. Late teens or early twenties. It wasn't the usual tired 'good morning" comment you get when on a campsite, it was "Oh my God wasn't it a terrible night".
It had been a dreadful night. One of the worst nights camping i had had since being blown down on Harris during a bad storm.
I got to sleep around midnight or just after, even though the wind had picked up noticeably. At 4.00 am the tent was bashing around my ears. I lay there a while and it was absolutely howling and raining. The wind direction had now change to a Northerly from a Westerly and was now a gale. Everything goes through your mind on nights like this, will the pegs hold, are those tiny Titanium pegs good enough, is everything in the porch still there, will the tent become a parachute, what if a pole breaks etc etc.  It wasn't long before i realised i would have to get out and turn the tent 90 degrees or i wouldn't get any sleep or worse.
I could now hear a few fearful tears from the girls, emanating from the tents close bye. The trouble is with being on a campsite the noise alone can be very scary. The trees are being buffeted, the boughs are creaking, the noise of items falling over in the farm yard, dogs barking. It can be very scarry in the dark out of your comfort zone. And now there were car doors opening and closing at irregular intervals.

I waited for a lull in the rain and then without getting dressed i dashed out in true Billy Connolly fashion and changed the position of the tent. It's an easy tent to alter, so i guess it took about a minute.
Dashing back inside and pulling the tent door zips down quickly, it got stuck on the zip flap material.
It was still dark so i had to put on my head torch and faff about trying to free it as the rain started again.
Eventually it freed and i lay there on the sleeping bag, knackered and a bit damp. At least the tent wasn't being buffeted as much now.

I must have dozed off because i woke up a bit cold and still on top of my sleeping bag, it was coming light 5.15am. I got back in the sleeping bag and dozed off again.
At 7.50am i had to go to the loo and that's when i met the young lady. Her and friends had slept in the cars. By 8.00am they were gone.

Walking down to the Newfield to have a coffee and a bite to eat. I noticed that there had been plenty of damage caused to the trees. The road was littered with boughs and leaves that had parted company during the night. On meeting Alan he said that they had thought about me as it had been a real Hooley of a night.

Sheila arrived and her first words were. You look tired! I wonder why. 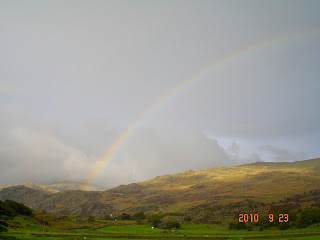 I had a similar tent experience at Garva Bridge last year but it only lasted for about an hour. I heard the wind roar up the valley before it struck and all the same thoughts about pegs and stuff in the porch had gone through my mind. Hope the weather improves for you.

Thanks Tony, I am posting my blog from home after the event. The dates on the photo's give it away. Sheila has the capability of blogging on the go with her HTC desire. But i am still in the dark ages i'm afraid.
Only 1 more walk to go on this trip unfortunately.