I had arranged to meet up at 10.00am at Alan's house in Seathwaite and by this time he would have made the phone calls to his mates, The Last of the Summer Wine walkers, and find out what was on or off as the case may be.
The weather forecast said a nice morning but rain from Lunchtime onwards with the wind picking up and changing direction to the North later.

Alan's mates live nearby  J35/J36 area of the M6 and the forecast for the Yorkshire Dales area was pretty good and so they decided to go in that direction instead of coming here to the South/Central Lakes.
So Tina, that's Alan's good lady had made us both a packed lunch so we decided that we would head off and do our own thing. (Thank you Tina)
Behind the Newfield Inn is a good track, the Park Head Road, we took this which skirts Caw and heads in a general SSW direction to meet with the fell road at High Kiln Bank. It passes an area where years ago much quarrying had taken place and there are still many adits for the intrepid explorer. 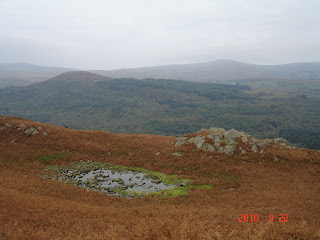 We took the path with climbs steeply up the fell side behind Hoses farm and leads past Hare Hall, skirts Scrithwaite Farm and exits on the small road at Green Bank. Cross the bridge over the River Lickle and within 5 minutes we were enjoying a beer in the Blacksmiths Arms.

The bridge over River Lickle at Broughton Mills
I have included this photograph because there is an interesting set of steps down to the river here where it is believed that the locals used to do the washing.
© Copyright Rob Noble and licensed for reuse under thisCreative Commons Licence 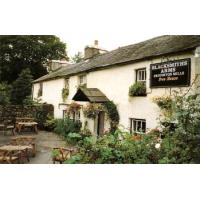 The Blacksmiths Arms in Broughton Mills dates back to 1577 and was originally a farmhouse called Broadstones. In 1748 archive records list the property as being an Inn, working farm of 34 acres and blacksmiths. Before this it would have been a "beer house" with the farmer serving ale in the kitchen for travellers and local workers.
The internal structure of the Blacksmiths arms remains unchanged with oak panelled corridor, original farmhouse range, large slate floors from local quarries, and oak beamed ceilings. The pub features in many guides including the AA pub guide, The Good Pub Guide and The Good Beer Guide. It remains the only pub in the Lake District listed in the National Inventory of historic pubs. (copied from the Blacksmiths website)
Back up the road from where we came to Green Bank we stopped for our packed lunch which we didn't want to eat at the pub for obvious reasons. There is a nicely sited picnic table just where the path turns West at the Nursery. The views over the Duddon Estuary are spectacular but today we could see the bad weather which had been forecast, making it's way inland. Before we finished lunch it had started to rain lightly so we donned our jackets and set off again. 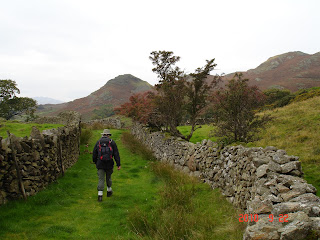 The green lane which skirts the Nursery and Hovel Knot is very well made and must have been in regular use years ago. Alan thinks that this area was possibly used for Flax Scutching in times gone bye.
Not to far along this lane we took a little detour to look at an old barn below Hovel Knot. It's an interesting place due to it having a Crook timbered roof. 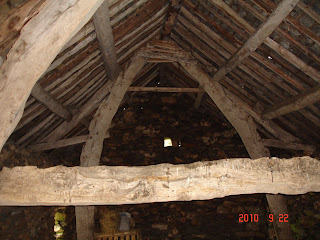 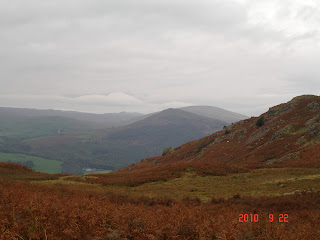 As we climbed up the fell to the top and now overlooking the Duddon the rain was starting to get heavier. We dropped down the path leading to the fell road which follows the River Duddon and went over to the river edge. 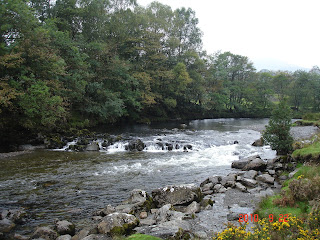 There are one or two spots here that make good wild campsites and it's a busy place on sunny days but be aware that the Police do move you on if you get seen wild camping here.
We had a bit of road walking to do now as we headed for Ulpha from where we left the road and headed  East passed the old school and Birks. 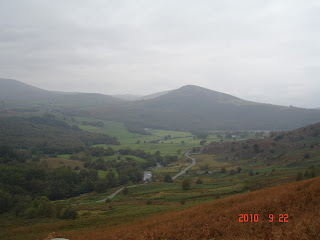 Along the track to Kiln Bank you come to a square enclosure planted with conifers. This is a Quaker burial ground or Sepulchre which is worth visiting. No ostentation here, no headstones, statues or monuments and a very low doorway. All is plain and quiet, inviting meditation. The last burial took place in the middle of the eighteenth century. You can still see the seating that was built into the walls for those attending the funeral or a meeting. A curious fact noticed by those who stamp on the soil is a sound as though the ground is hollow. It's also not marked as a cemetery on the OS map.
An old Mr. J. Casson, of Kiln Bank, the next farm, could remember the ground as being used as an orchard. Later it became a vegetable garden. About 1870, Mrs. Gunson, of Oak Bank, planted the trees which you can now see, and put up a new gate. It is supposed to be the duty of the tenants of New Close to keep the place in order. 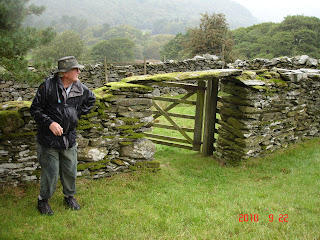 Alan just inside the Quaker Cemetery with it's low doorway. 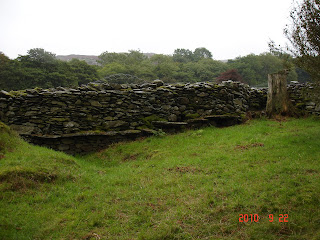 The wall seating.
The rain was now pouring so it was time to put on the overtrousers.
On reaching Kiln Bank and the fell road we crossed over Tommy Gill and behind High Kiln Bank Farm. From here we headed on down by another extremely well made trod, too good just to be fell path it might have been the old valley cart track to The Low and beyond. The surrounding hills were rapidly disappearing  as the rain swept across, no longer could we see Grey Friar or Dow Crag. 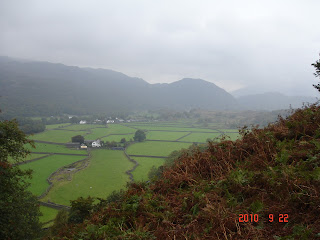 The Low in the foreground with Hall Dunnerdale behind
Once passed The Low farm house it was just a matter of following the road for one and a half miles back into Seathwaite. We were going to go via High Wallowbarrow but the rain was now bouncing and in for the day. So it was back to Alan's for a coffee and to get dry.
It had been an enjoyable walk especially with having Alan and his local knowledge of the history. So thank you Alan for the walk and the information. And Thank You Tina for everything.
Posted by AlanR at 9:05 AM

Hi Martin,
Thanks. I will do my best.