I have been reviewing a jacket for a Manchester company and was well on the way to completing that review when i very reluctantly, (ha), had to go to Greece.
The part of the review which was lacking was, what is the jacket like for condensation when the walking pace was a steady 3mph for a few hours, and this i did today.
I will post the report on the jacket later but today's walk was a really lovely walk along the Huddersfield Narrow canal and short sections of the river Tame and a very short section of the Standedge trail.
The morning started grey and with short showers, the roads had plenty of standing water and i was wondering if it was going to be another day like the previous 2 days, when it hadn't stopped raining.

The M62 was as busy as usual but once off the motorway the side roads through Newhey, Denshaw, Delph  and into Uppermill were all quite clear. Again, lots of local flooding was obvious with the numerous road works, temporary traffic lights and plenty of sand bags along side and outside peoples houses.

I parked up in Uppermill on the 3 hour free carpark. I had wondered about moving the car elsewhere but i thought 3 hours would be enough for what i had in mind.
My route was to walk the Huddersfield Narrow canal from Uppermill to Greenfield and then turn 180 degrees and return via the River Tame. Once back in Uppermill i would return to the canal and follow the towpath to the Standedge tunnel at Diggle.
The canal at Diggle, cannot be followed into the tunnel and so i picked up the standedge trail passing the Diggle Hotel and onto the moor.
I was walking on a time limit and so when that time limit was reached i had to return to avoid a parking penalty.  As it worked out i wished i had moved the car because it turned out to be a fine day. 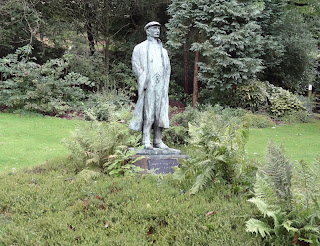 Uppermill local poet and antiquarian. Ammon Wrigley 1862 - 1946. Most of his poetry was written about the Saddleworth Moors. This statue is adjacent to the Museum car park and where i started the walk. 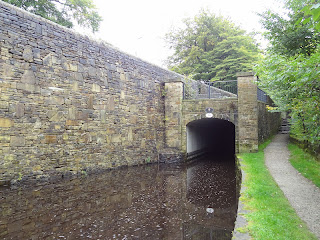 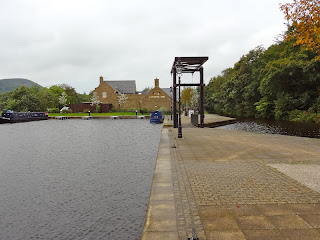 Approaching Greenfield “Frenches” Moorings and the Kingfisher Public House.
This is a fairly recent mooring and in a good spot. Just past the pub i enquired of a dog walker if the footpath along the River Tame was still open. We chatted for a few minutes and she explained that the new Tesco’s and new housing development had temporarily closed the footpath but with her help i found my way onto the riverside path.
The river, flowing fast and brown in colour due to the extremely heavy rain over the last 48 hours. The peat being washed down off the moors giving the colour.
At one of the weirs the river could be seen in spate and giving off quite a noise. 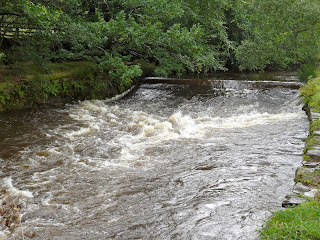 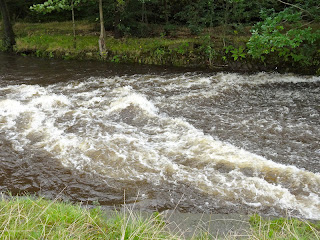 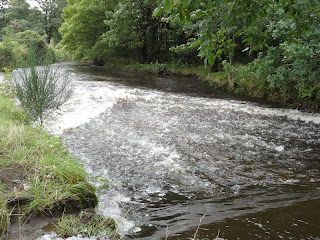 River Tame in Spate
I followed the flooded river path back into Uppermill and the view to my right was dominated by the Obelisk on Aldermans Hill, remembering the dead from the 2 world wars. 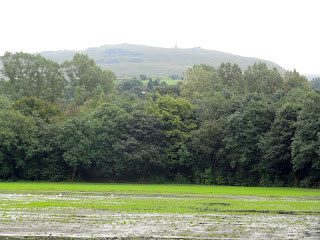 Obelisk on Alderman Hill
Although dry, the day was quite humid and the higher hills were only just starting to shed the cloak of mist. Arriving back in Uppermill and picking up the canal once again, this time to head east, workmen had started the job of relaying the gravel tow path. I cautiously picked my way around them in order not to fall in.
I was heading now for Diggle. I love that name. The journey is one of sheer delight with the surrounding moorland getting closer and closer. The river fast flowing on one side and then the other. The railway line also swopping and changing and we are all heading for the same junction. Standedge tunnels. 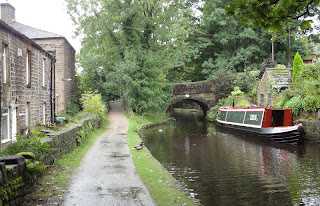 Leaving Uppemill
The restoration of this narrow canal is wonderful. They did a brilliant job. 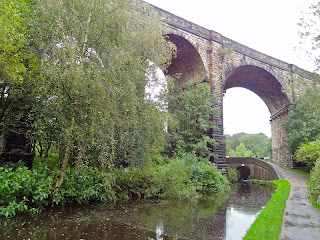 Approaching the Saddleworth Railway Viaduct with the Skew Archways. 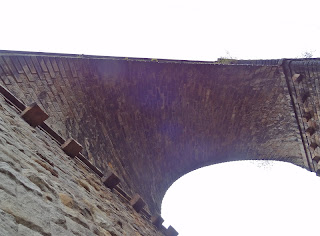 View underneath showing the Skew stonework
The viaduct is a real gem but unfortunately from the canal you just don’t get to see it in it’s true glory. You have to get higher up on the hillside for that. It was completed in 1849 to transport goods during the industrial revolution, as was the Huddersfield Narrow canal. The viaduct has 22 arches and 3 of them are skewed.
The 2 locks either side of the viaduct, Dunge Booth lock and Lime Kiln lock were the first locks to be renovated. 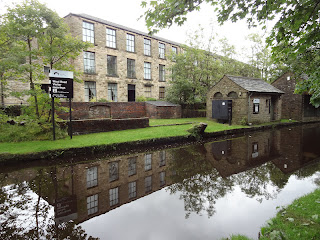 Wool Rd Mill and Transportation shed used for the movement of wool during the Industrial revolution. 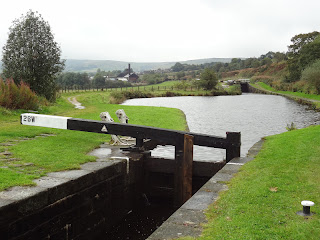 The start of the Diggle flight of locks. Looking east. 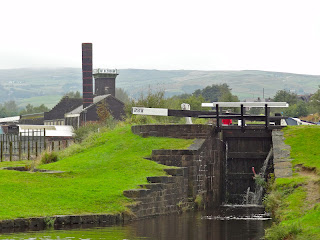 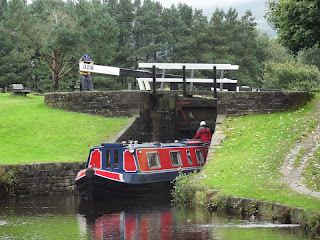 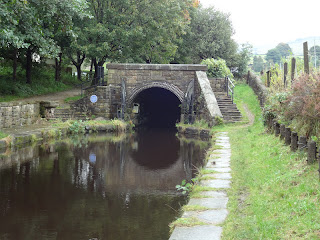 This is the west entrance to the Standedge tunnel. The plaque to Telford can be seen on the left hand side. From here, we pedestrians have to take alternate arrangement to get to the other end of the tunnel at Marsden.
The canal tunnel is the longest, deepest and highest canal tunnel in Britain. It is 5,029 metres long, 194 metres underground (at it’s deepest point)  and 643 metres above sea level.
Boats used to have to be legged through the tunnel in times gone bye but now boats are assisted with an electric tug. 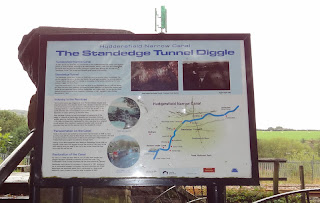 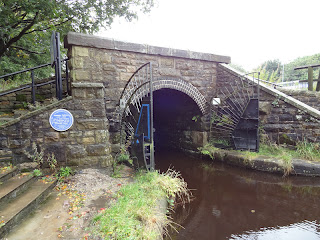 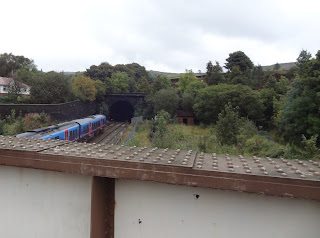 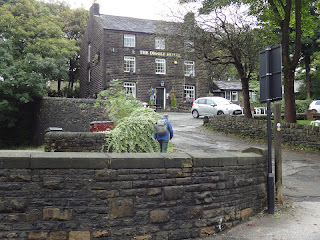 The pedestrians route to Marsden can follow the Standedge trail and The Diggle Hotel is at the start of this section. It’s a good path with superb views. 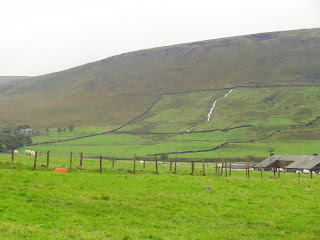 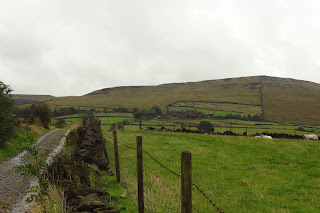 View North East towards Round Hill 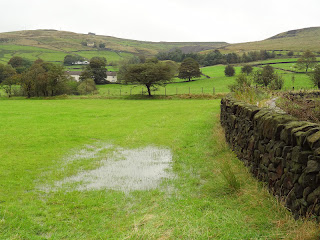 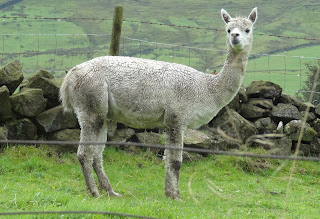 Just one of the good looking souls i met on route.
(Its for you Mike)

Time ran out at this point, just as i was approaching Round Hill. I had to turn back. I was a little despondent because it was such a lovely day out and no complaints as to the weather.

I returned using the footpath on the opposite side of the canal and within an hour or so i was back in Uppermill. The waft of hot fish and chips was just too much to avoid and so i finished off just like Wainwright.
Five minutes after i got back to the car and before i had disposed of the chip paper, it started to rain and then it poured. How lucky was that.