Where shall i go?

I was up early, its becoming a habit.
A lovely blue sky spring day flooded in when I opened the curtains. I must walk today, it would be a crime not to.
I set off with the thought of just doing our usual 10km route with maybe a few hilly extensions that Dorothy doesn't appreciate.
Getting on the towpath of the Rochdale canal at Slattocks I turned and looked at the wind turbines on Scout Moor. As ugly as they are the sight of the hills was pleasing. Cloud thin and whispy. 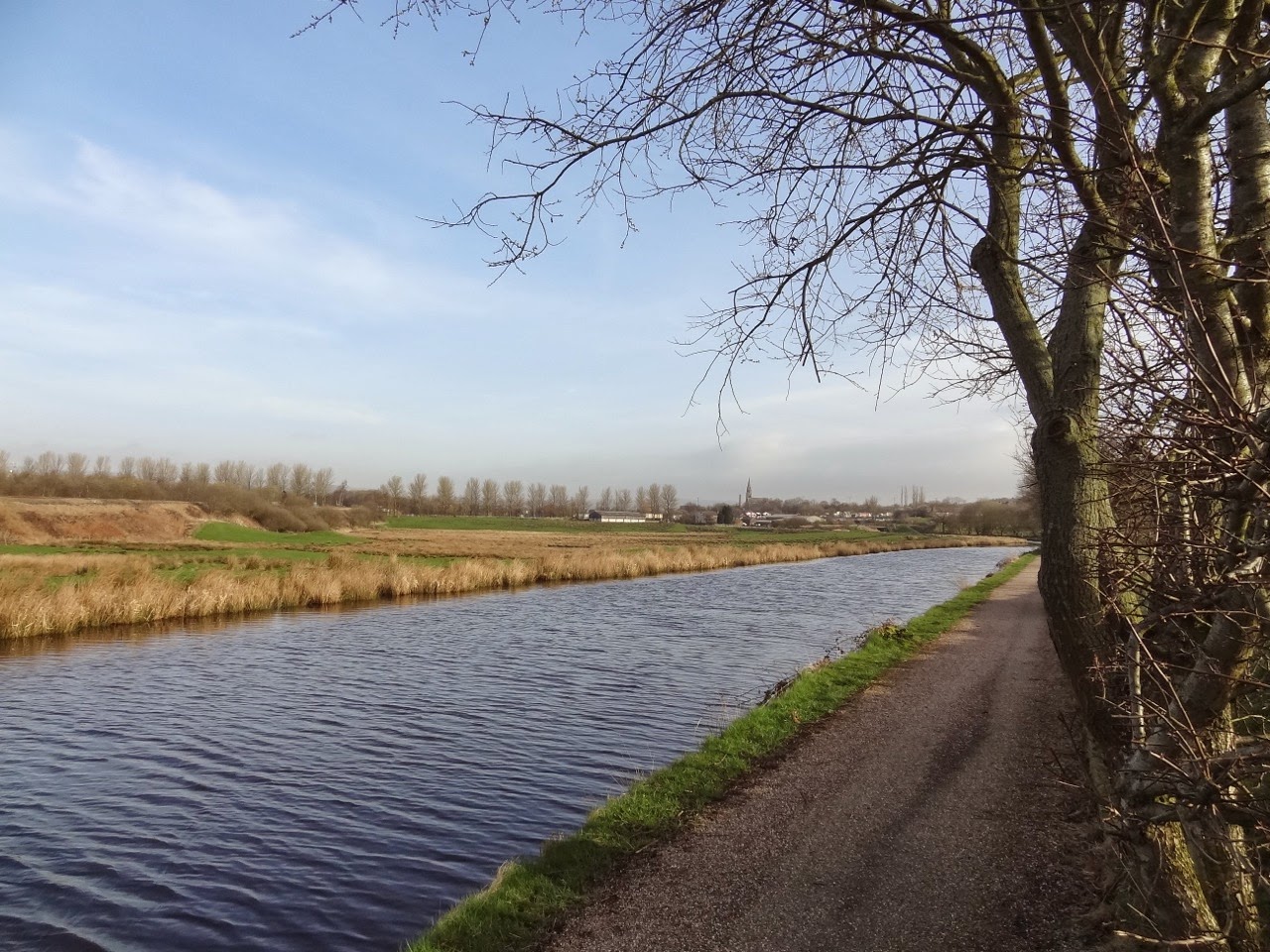 The Rochdale Canal at Slattocks with Castleton church spire in the background.

I pondered, in two minds about what to do. It would be better walking in the direction of the hills I thought. A quick check to see if I had any money with me and a desicion was made. I would walk along the canal to Smithy Bridge and get a train back.
The sun was behind me and it was good to feel it. I had my TNF Zephyrus warm smock on as a rain free day was forecast and i had no options of swoping it. I did have 500ml of water and an orange so enough for this walk and so off i went.
The new houses going up where Whipp and Bourne switchgear used to be are progressing well and some now occupied.
Castleton greeted me with a strong aroma of bacon cooking from a road side cafe. I resisted the temptation and carried on.
Unfortunately the canal banks between Castleton and Sandbrook are disgusting with litter and company waste and I expect all parties are refuting ownership. However the canal banks are the responsibility of the Waterways and I think they need to get there act together here.
At one point i thought i was in Tibet when i came across this prayer tree below. 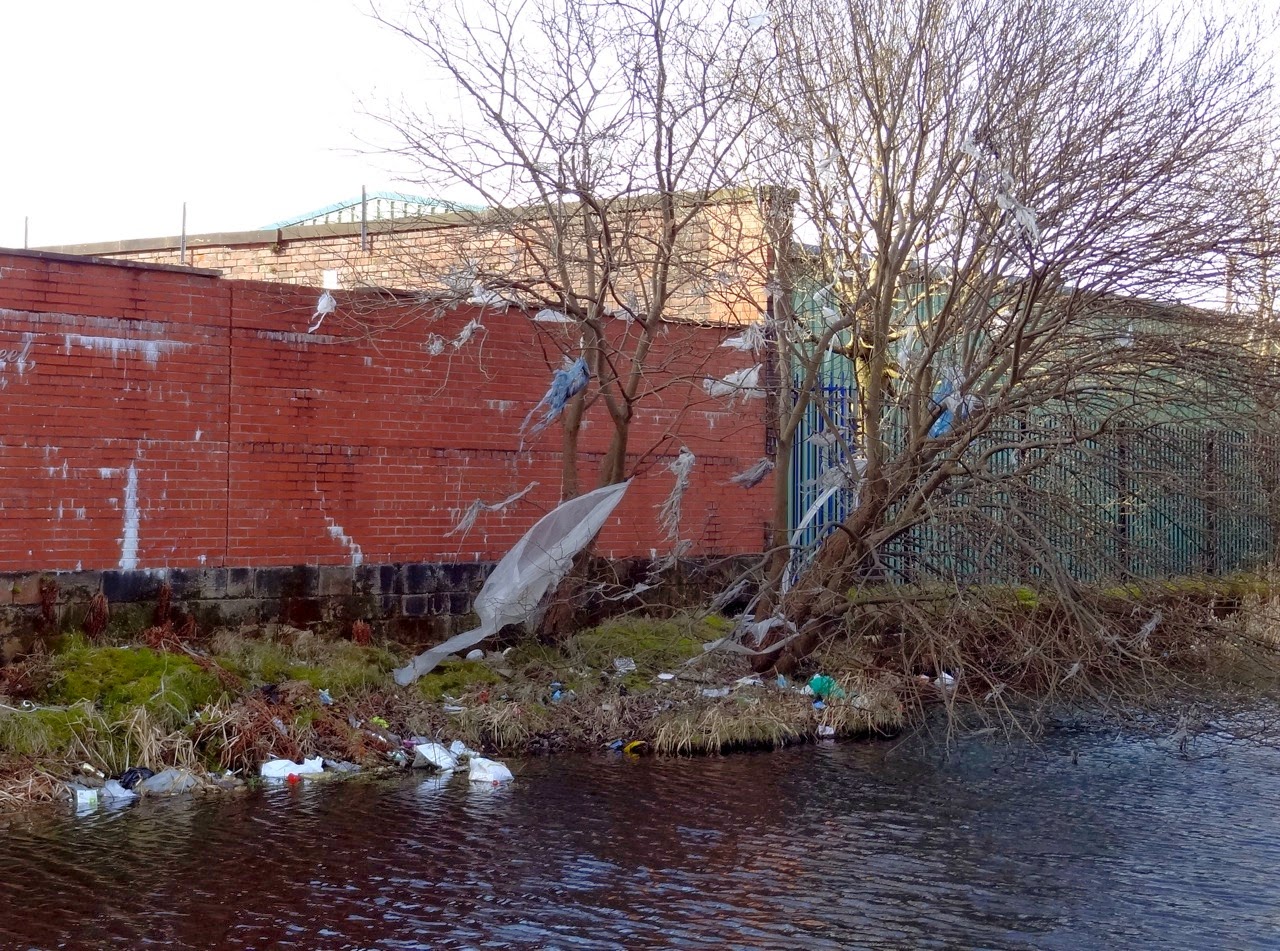 Just as you reach Sandbrook the canal towpath takes a diversion and it isn't signposted as to where walkers need to go. I knew the route so it was easy but its far from clear.
Back on the towpath and heading for Rochdale. I passed a number of old mills that still had a chimney intact. Fred Dibnah must have glared at these for years.
Once across the A664 the view opens up towards Blackstone edge and I was glad to get away from the smells of industry. What used to be green belt is now being converted to housing. I hope they have put good drains in because its a bit of a wet area from what I recall. A footpath blocked off by the builders again with no signage as to where a diversion was. 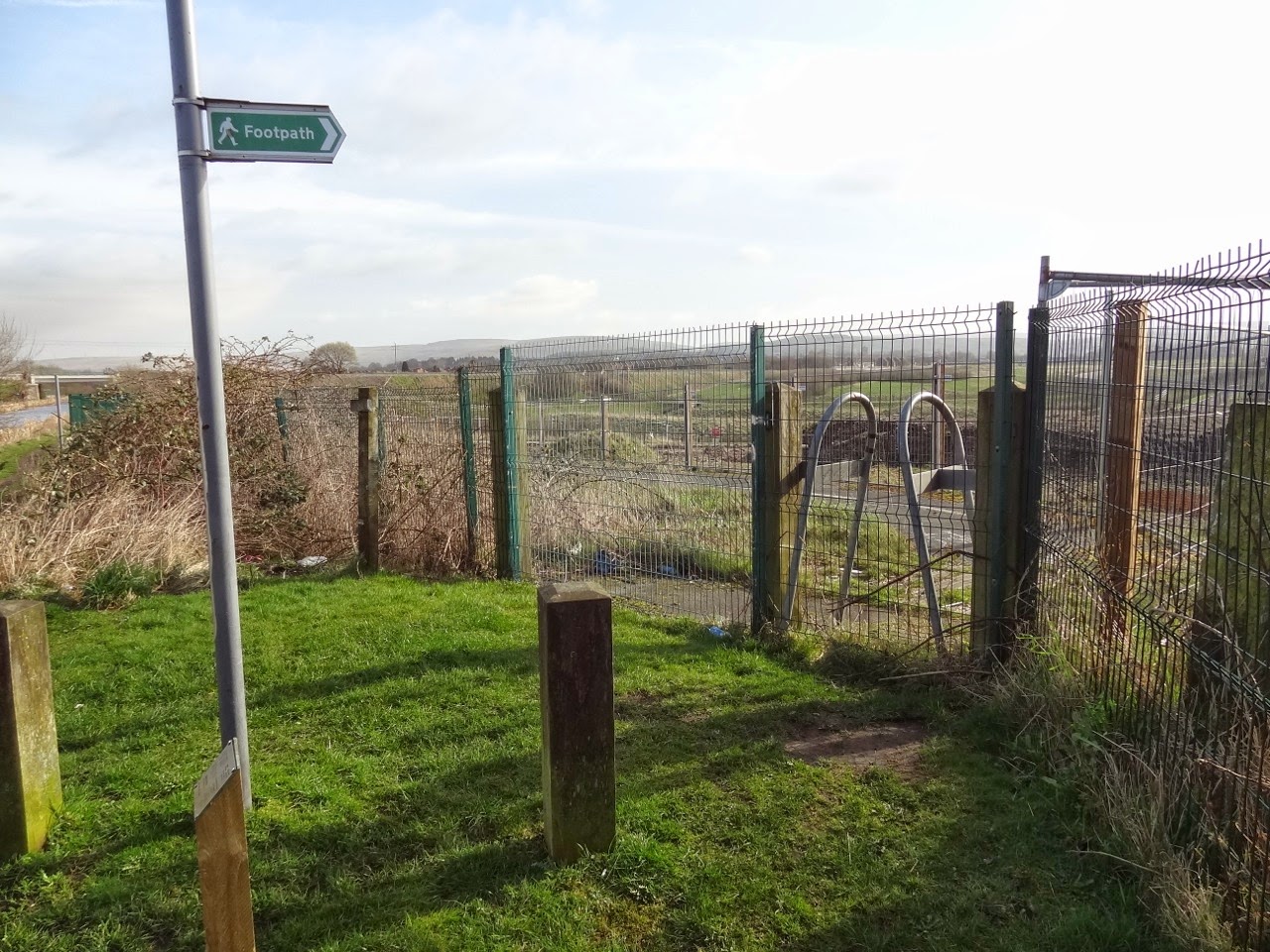 Soon I walked past Clegg Hall, an exceptional building built in or around 1610. I wondered what the local populous thought when they saw this building going up. 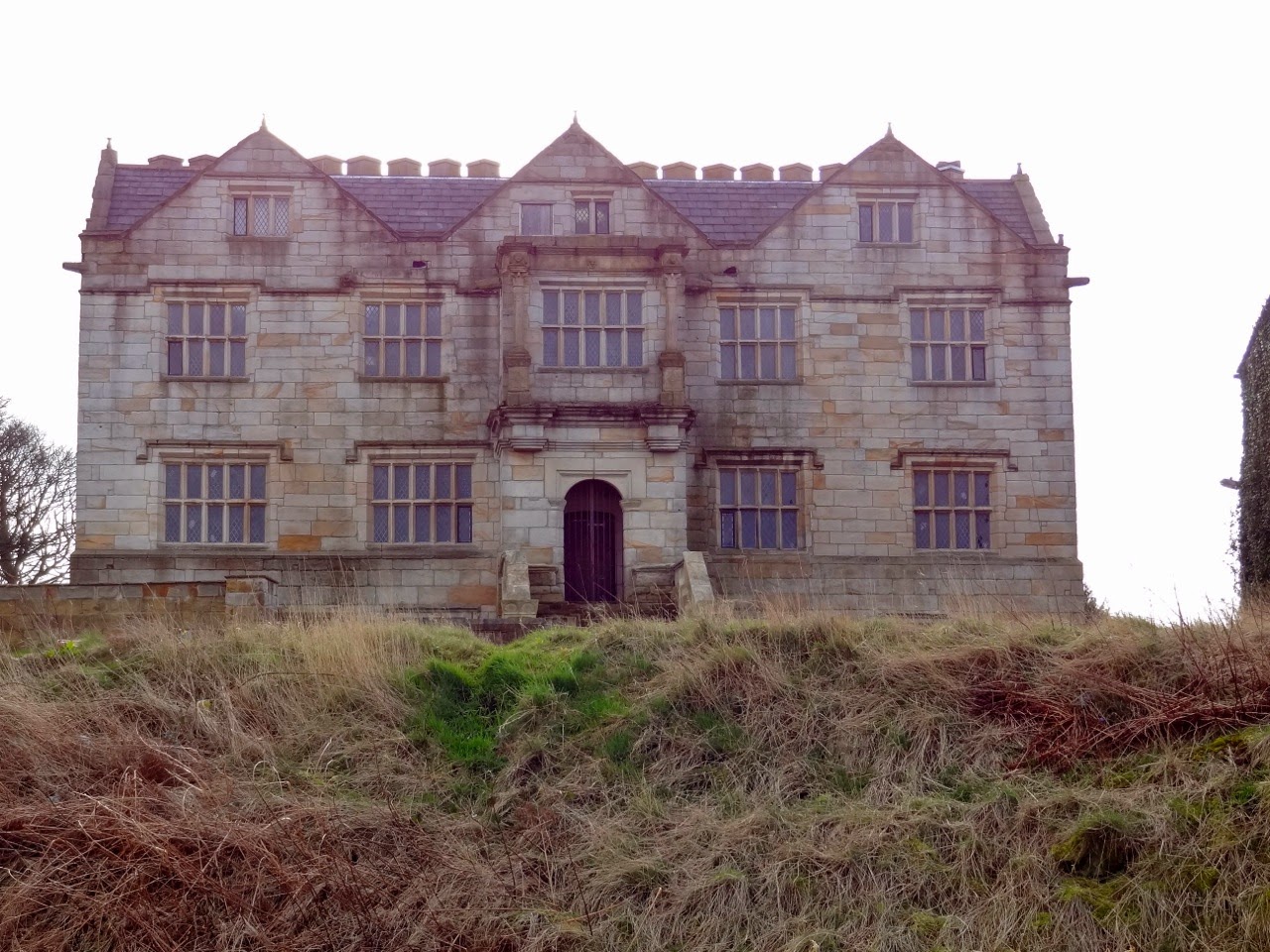 It was built by Theophilus Ashton who was a lawyer living in Little Clegg, a few hundred yards further on. The Clegg family after which the village and hall was named never actually lived in this hall. 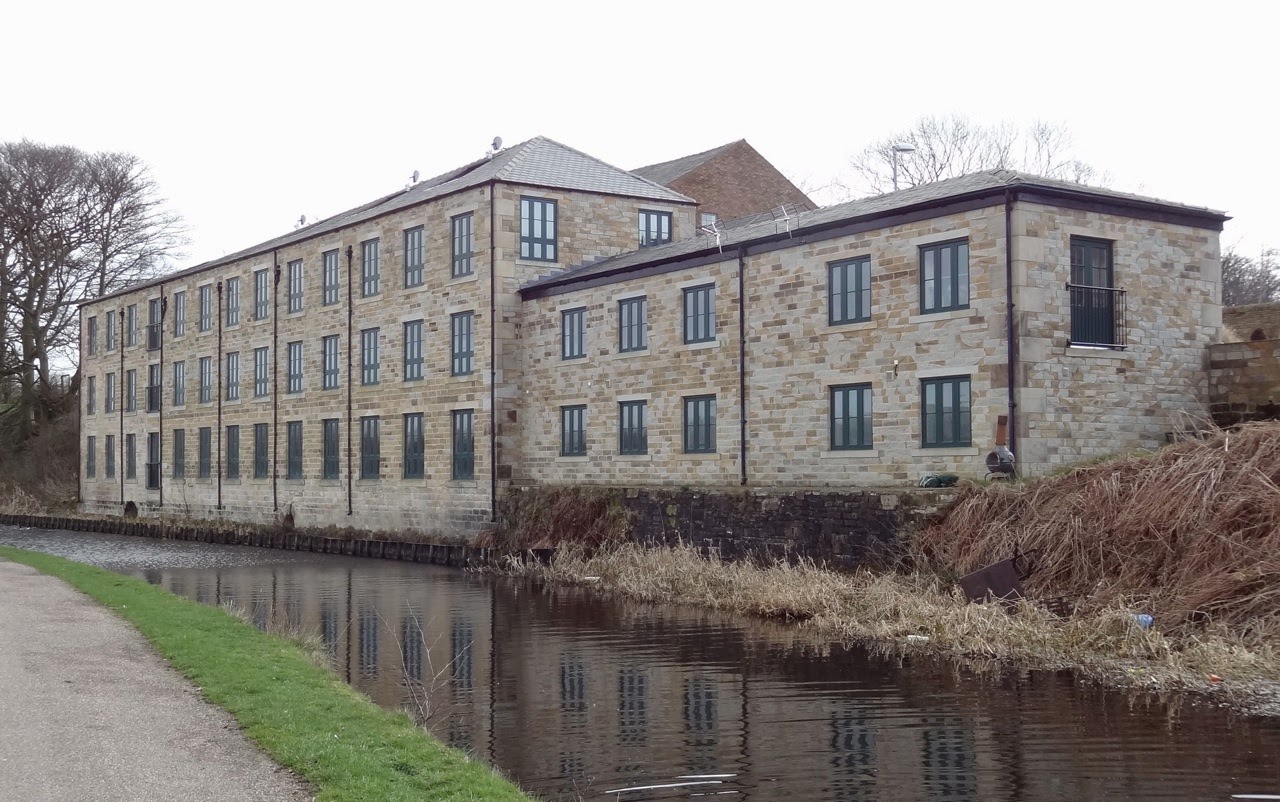 The old textile mill next door to the hall has now been sympathetically converted to apartments. Built by Joseph Fenton around 1811 as flannel making mill.
The walk along with this section to Smithy Bridge is a delight and all too soon the railway station came into view. After a drink I wondered whether to carry on to Littleborough or get the train. 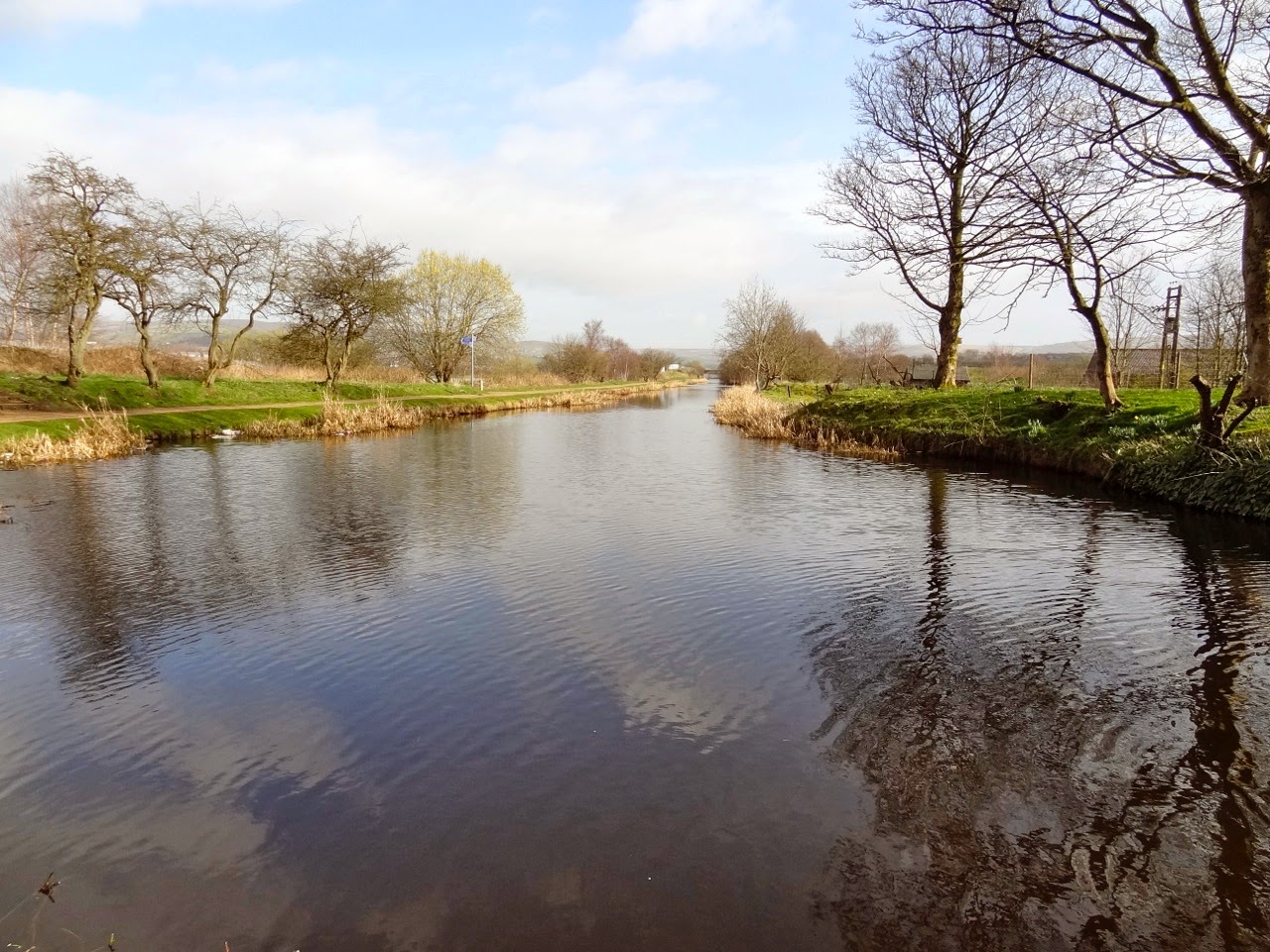 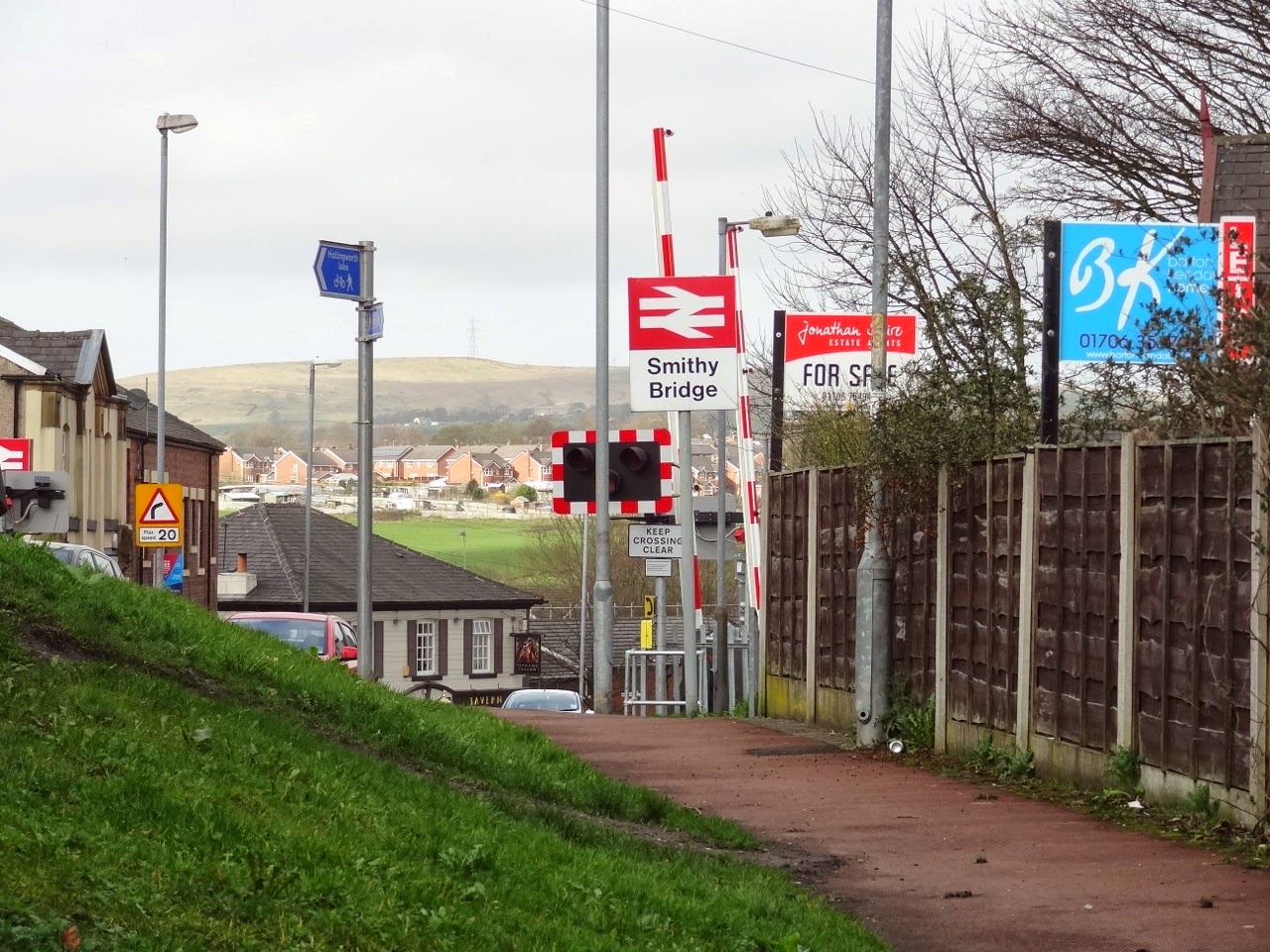 Smithy Bridge - up for sale?
I carried on. The breeze had picked up quite a bit and although I had taken my jacket off earlier I persivered with just a base layer. At Littlebourgh quite a few walkers alighted from the train and headed off mainly in the direction of Blackstone Edge. I looked over for a second or two and thought they were in for a clear but very chilly blustery day. 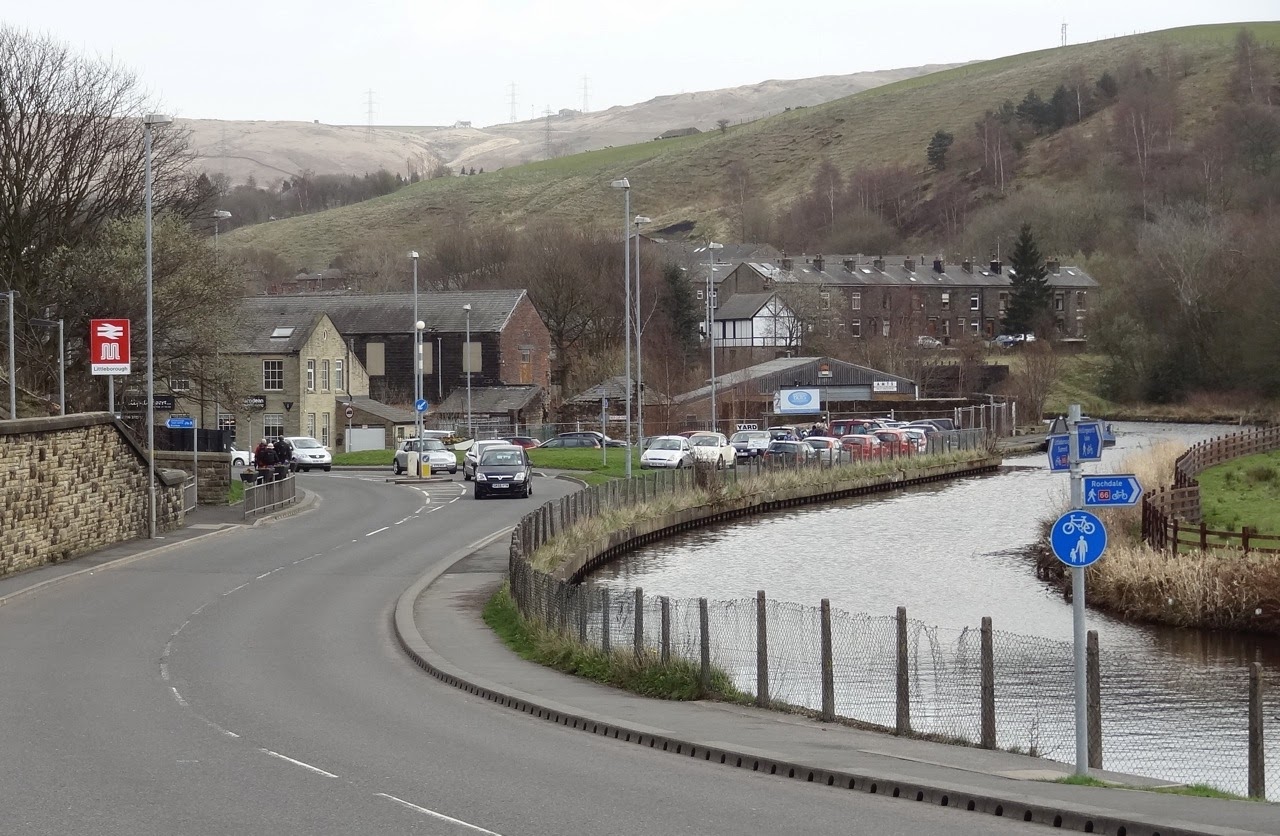 Littleborough with Blackstone Edge at the back.
Having checked the train times I had 40 minutes to wait. I headed over to the Co-oP for a sandwich. I had a wander round and then decided to walk back to Smithy Bridge instead of waiting.
Once at Smithy Bridge I didn't even stop, I just carried on and walked all the way back. Almost home I still hadn't eaten the sandwich I'd bought in Littleborough. As I passed a lone bench my head said "stop and eat your lunch" but my legs said "don't you dare". The legs won. I was getting a bit leg weary. 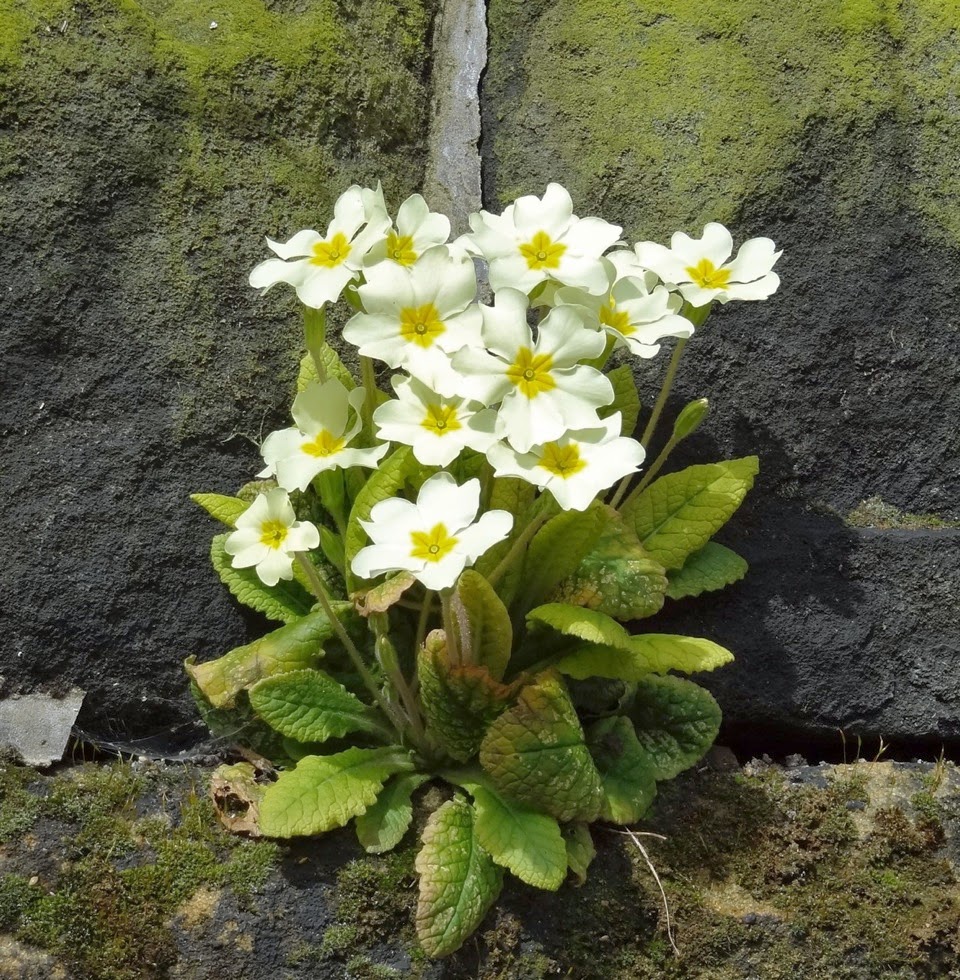 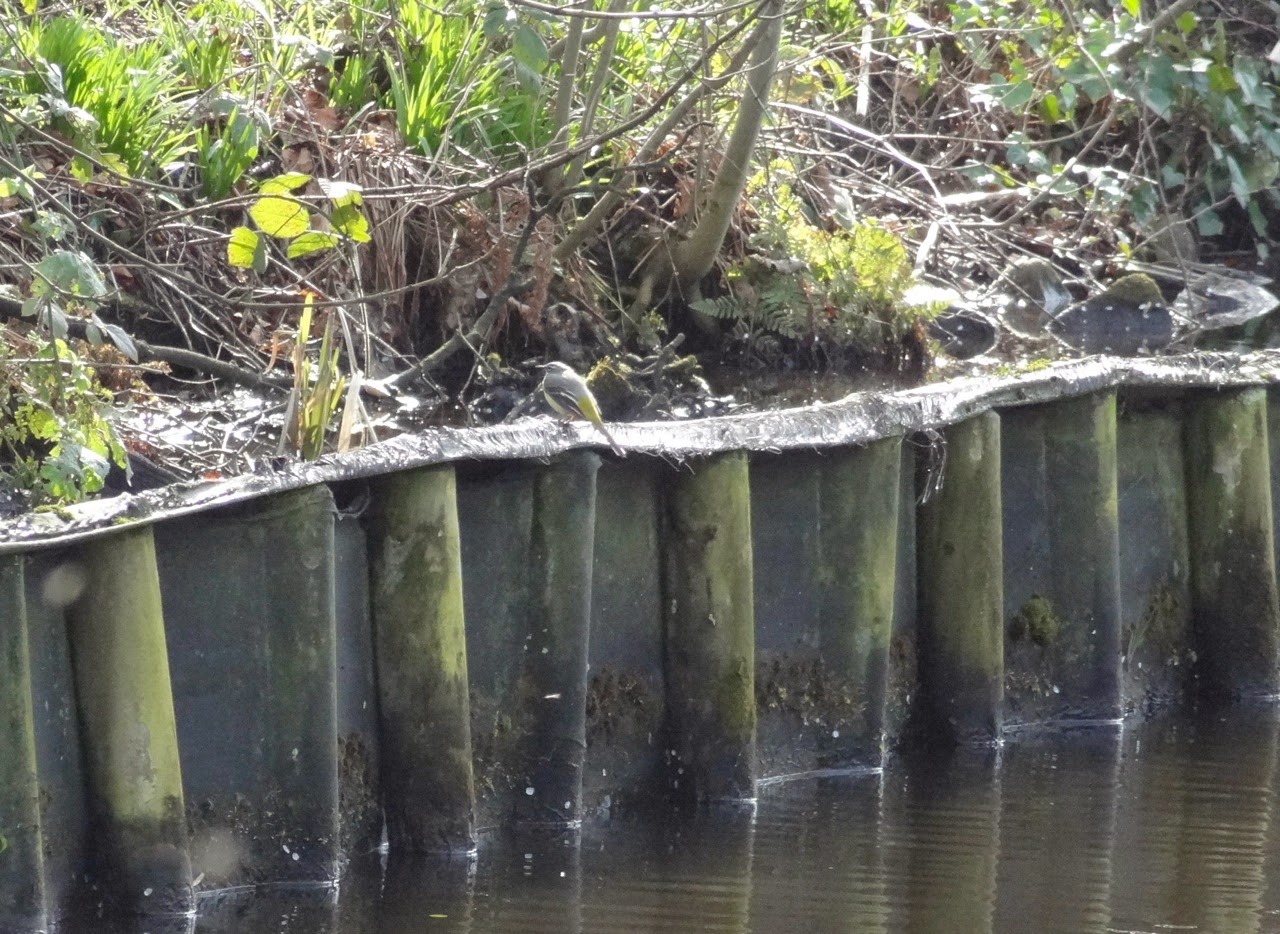 This Grey Wagtail followed me for quite some way and although continuously moving on i managed to get one picture. 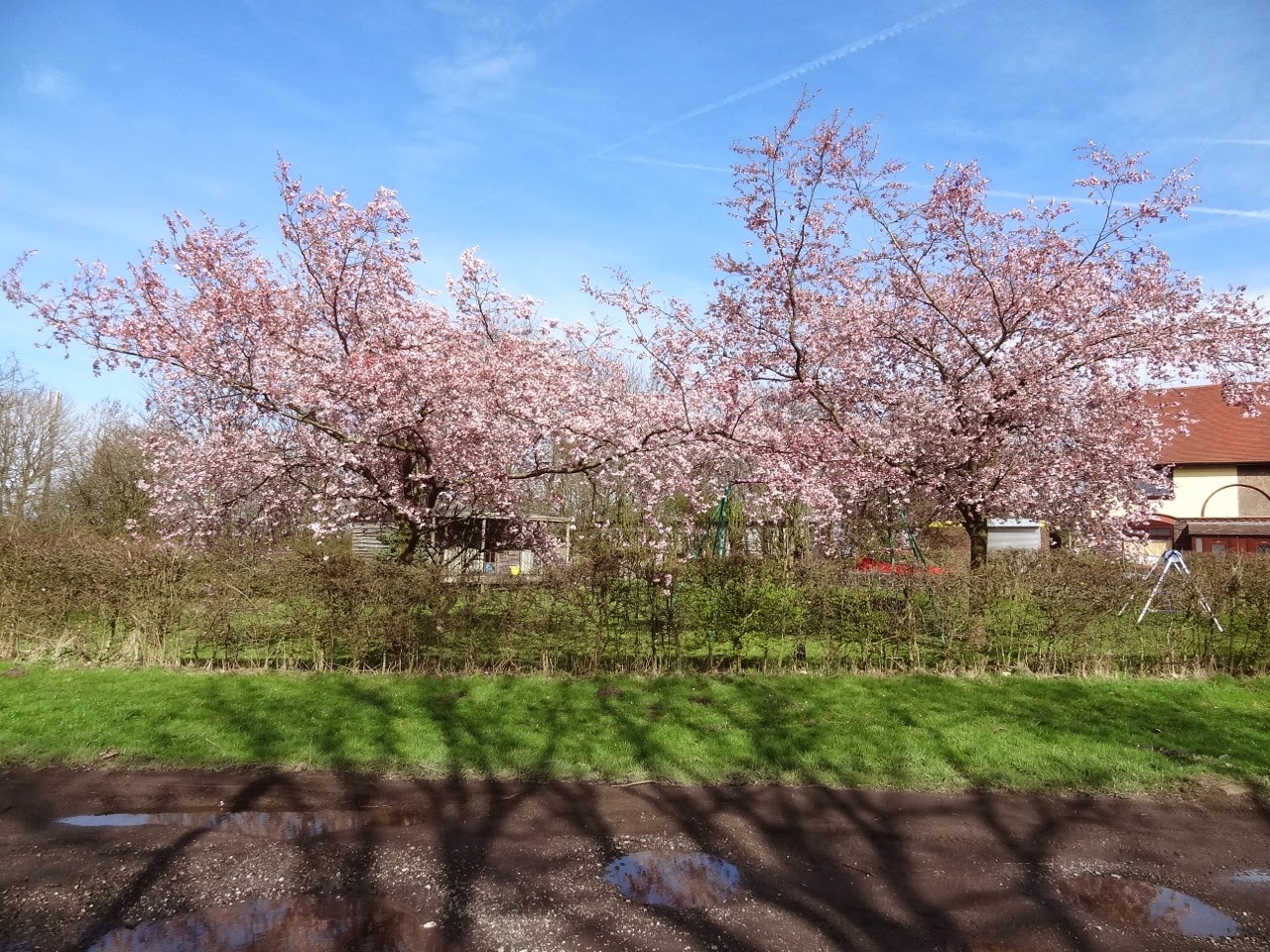 Nearing home these Cherry trees are well in blossom and below the grass is in fine fettle. 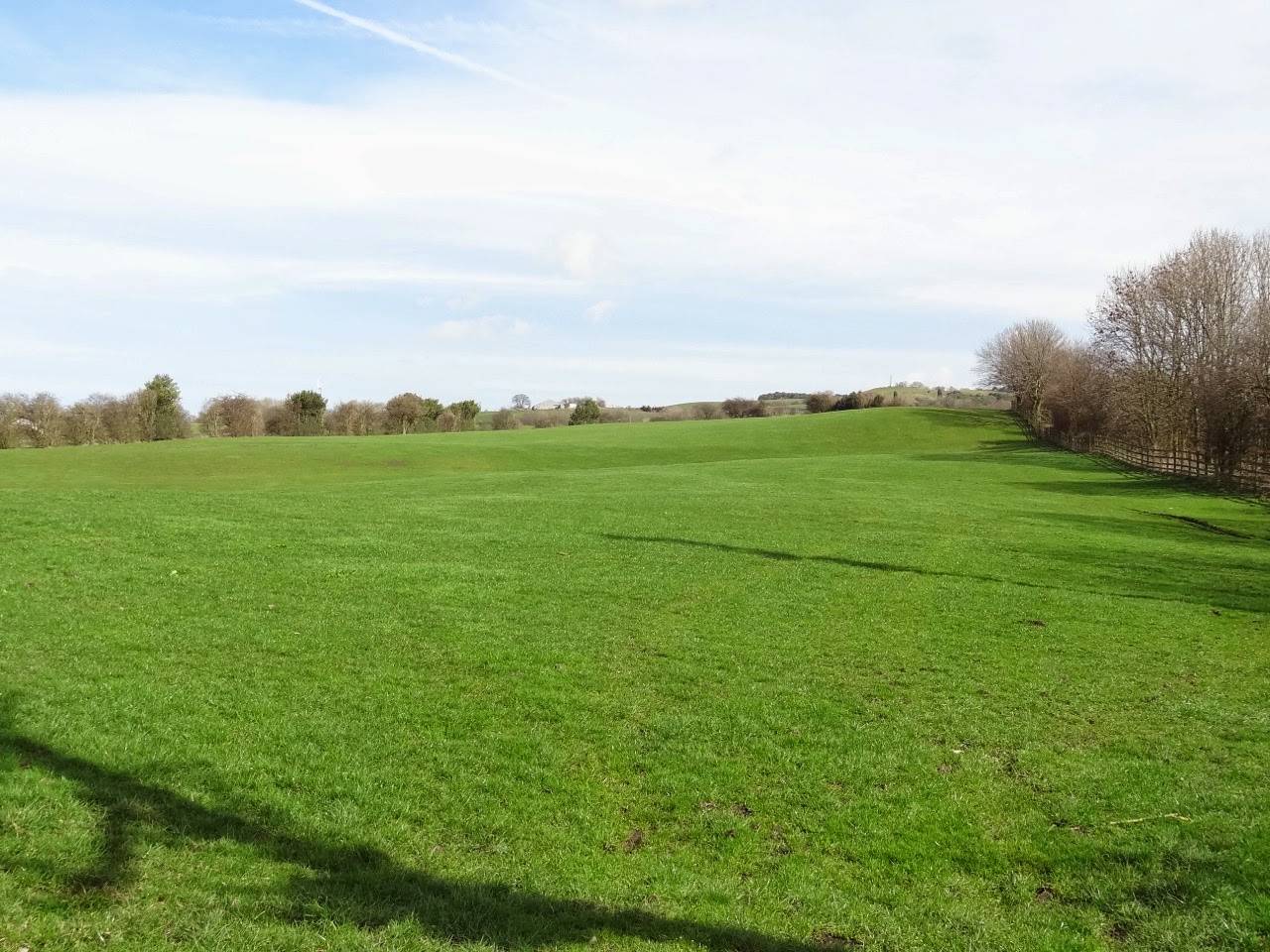 Another surprising day out. I certainly had no intention of going this far but I'm glad I did.
I might walk into Manchester tomorrow.

Satmap said it was 24.5km. The map below says it was 24.3 and the Ascent figures are strange. Naismith was a bit slow but not far out. 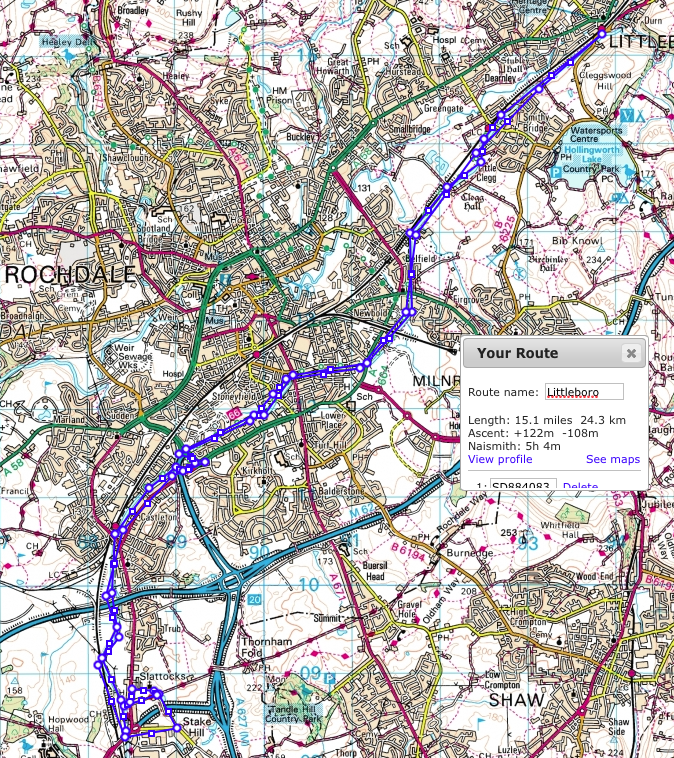 You must have a strong will. I couldn't have walked past that bacon butty café, especially with the smells wafting about.

If it had been another mile away i may have been tempted.

That is good going Alan. Imagine passing up on a bacon butty though. That is stern discipline!!

And also I wasn't sure how much the train fare was going to be. I didn't have much money with me.

I've been to Hollingworth lake a couple of times,
but never knew about Cleg and Cleg Hall, thanks for that.
see :-
http://teddytourteas.blogspot.co.uk/2014/03/1-photo-day-6.html

Hi Dan, Clegg Hall was derelict up until around 10 years ago when i think an American bought it and restored it. (I think it was an American anyway.) I just want to get in and have a look round but i don’t know if its open to the public.

Pity the route takes you through a few rougher/neglected areas. Scout Moor windfarm is going to get a lot bigger too.

Hi Andy, Somehow your blog has slipped through my net so i’m glad you commented. I can now nip over for a read.
There are lots of run down areas next to canals, especially up here in cotton and wool land. If the trade had not disappeared abroad who knows what the areas would have been like now.
But mills get demolished, people move away, brown sites take over, fly tipping increases and before you know it a rough area has taken over. Many sites have ground issues and cannot be built on for a number of years which doesn’t help development but i think improvements are starting to show.
I just wish that people would stop tipping rubbish and those that sit on the canal sides drinking would take the empties to a nearby bin. Commercial companies are also to blame as you see what they have conveniently chucked over the fence.
Anyway enough of my winging. Generally, apart from the area between Castleton and Sandbrook its a lovely walk.
Yes, i hear things are stirring again on Scout Moor, what a shame.