A circular route round Loweswater.

There are lots of parking places at either end of the lake, we parked at Waterend, next to the public phone box. We set off in a clockwise direction picking up the lakeside path as soon as possible to get off the tarmac. The road is not particularly busy but it’s nicer to walk on a path than a road.
Weather wise, it was a good start, chilly but high cloud and those strong winds of late had died down.
The fells surrounding Loweswater are steep and inviting. The light changing the colours on the fells as clouds move over them. At times you think it’s summer and 5 minutes later the same view links winters. I cannot remember a valley which is so influenced by changing light.
As we made our way towards Loweswater village we passed properties that scream out history. Crabtreebeck, High Thrushbank with a mill stone positioned in the garden and the imposing frontage of Highcross.
There’s an information board at an old sheepfold which we read was a “Pinfold”, not a word I have come across before. It’s where stray sheep were put so that they could be collected later by their owner after they had paid a fine to the “Pinder”. It dates from 1655. Not so good old days were they.

We turned off the road and crossed Maggie’s bridge where there is another car park. There are numerous paths leading off from here but to follow the lake path we took the one past Watergate Farm, a National Trust property with some self catering accommodation. There’s a bothy in Holme Wood which is in a terrific position with great views. It’s basic just like any owned by the MBA but this one differs in the respect that the MBA bothy’s are open and free to the public, this one owned by the National Trust is locked and charges £60-£70 per night for the privilege of staying in a stone tent.
There are signs everywhere saying that Red Squirrels are about but search as we did we found none. Sheila was a bit disappointed.
The woodland is mixed and looks well managed, the paths are good, so it made us feel even more stupid that I fell once and Sheila twice. I’ve a great lump on my shin and Sheila has a cut knee and a sore hand. Oh well.
Once out of the woods the path passes Hudson Place, an old farm with a plaque which said 1641 I think it was. Five minutes later we were back at the car. A nice couple of hours walk. 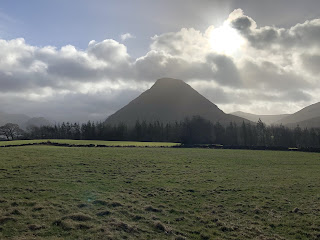 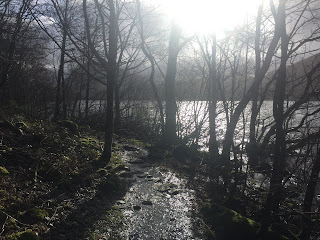 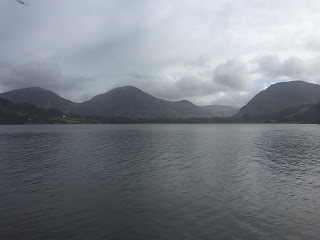 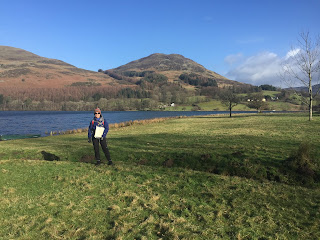 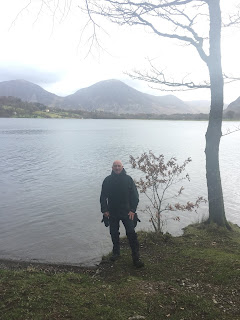 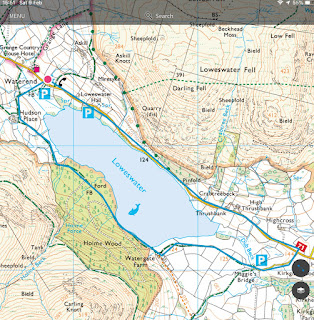 Sorry to hear of your tumbles :-(
It's a good circuit, although I haven't done it for a number of years...I'll have to put that right! Particularly good in Spring, lots of Primroses and Bluebells from memory.
Thanks for sharing
Alistair

If I had realised earlier how much better the weather was going to improve we would have gone higher. But that’s hindsight. We couldn’t believe our falls, they were on easy good paths. Fortunately no lasting damage.
It’s a nice circuit and it can be made longer too. The daffy were out here.

Sorry about the images. All taken with iPhone 6 and because blogger new post page won’t scroll down I can’t edit the images to make them bigger. It’s a nuisance and it makes me feel less interested at posting but at the end of the day it’s my diary too, so I will put up with it. I should get my Wordpress page running.