After yesterday’s lovely day we were full of enthusiasm to get up and out. I opened the curtains to see, well, nothing. The hill fog was right down and visibility was I guess about 100 metres.
Sheila made a brew and we stayed in bed.
We decided that the best option would be to go for a mooch around Keswick, we needed some supplies etc etc. Keswick was pretty quiet and we had a good chat with the staff in Alpkit about Iceland and dehydrated food. Lunchtime crept up on us, it’s always doing that, and always about the same time, strange that.
Then God forbid, the sun came out. It was very pleasant. Sheila said “why don’t we do Catbells seeing that we are here, it’s sunny and I haven’t done it”. “Do we have to” I said. So we drove to the foot of the hill where you can usually park up mid week, whereas you’ve no chance at weekend. How those folk who live there put up with some of the stupid drivers is beyond me. Why don’t the CCC make a bloody car park instead of making it so damned hard for folk. It’s a busy hill, it always has been. Today was no exception.
Then it rained, and it rained again harder. We set off, and got to the top of the first rise, we met half a dozen folk coming down, looking a bit bedraggled. Sheila then said, “do we have to go up that.” I must admit that in this light with the rain and the mist swirling round it did look daunting but I’d been up many times so I knew it as an easy ascent. I told Sheila that I call this Granny Hill because it’s so easy.
The wind was quite strong and gusting, making the rain lash too. At the base of the main summit rise people were being very careful descending as the rock was very smooth, slimy and slippery. There is an easier ascent on the left of the main rocky route. We took this as it put us in the lea of the wind. Some care was still needed in parts.
At the summit cairn it was dreich and the higher summits up to Dale Head and beyond were in the fog. It wasn’t a place to hang around enjoying the scenery, we took the usual summit photos and set off back down.
We only passed four other people on their way up which is incredible for this hill.
So Sheila has another hill to add to the list. Not that we are counting anymore.
Please click on the images to enlarge them. 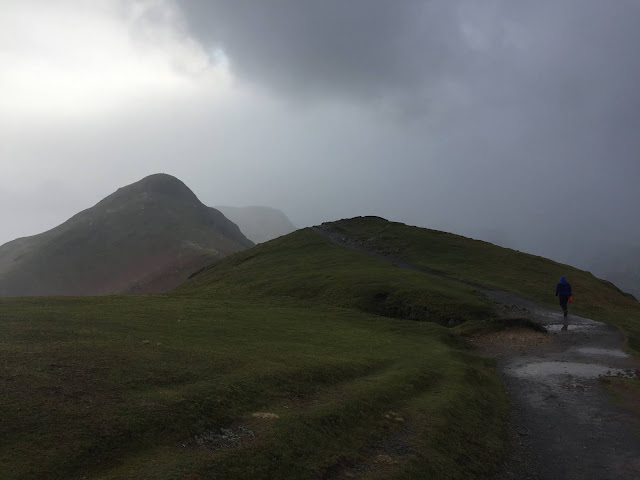 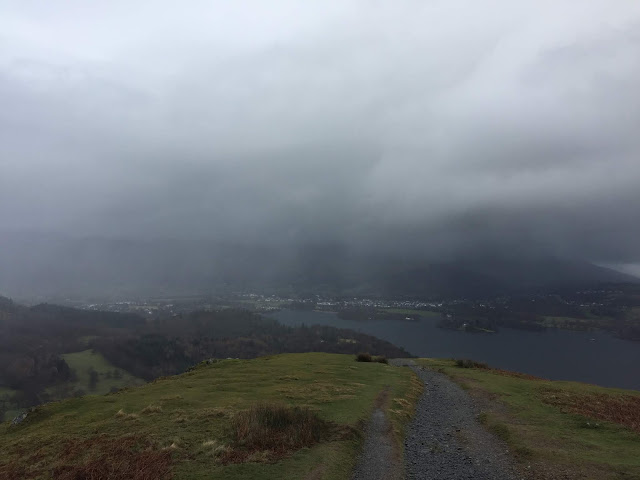 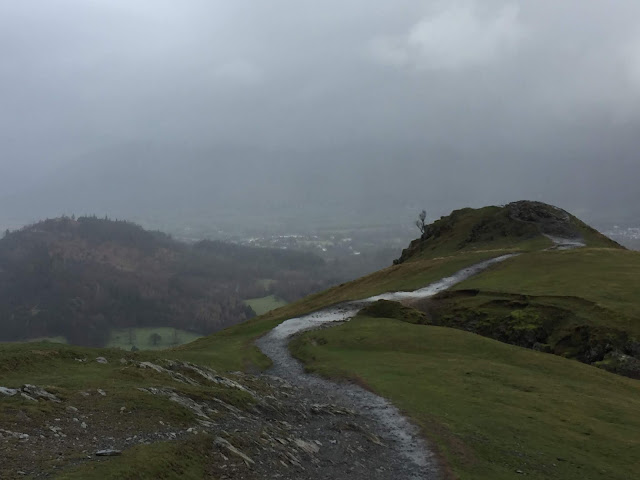 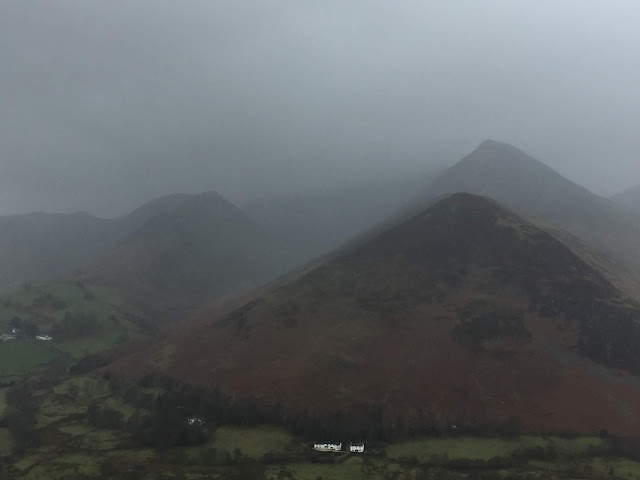 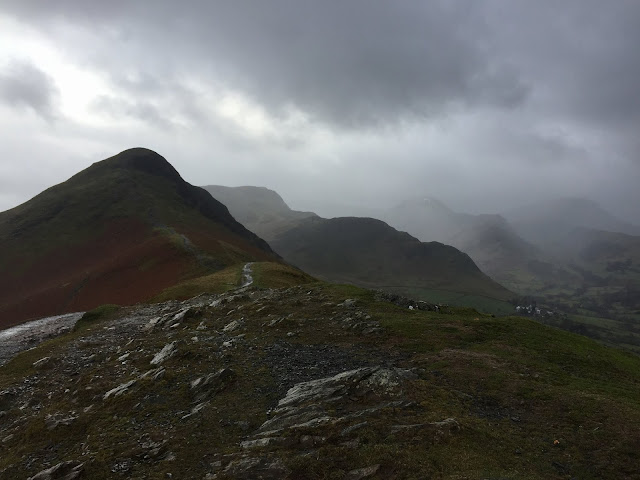 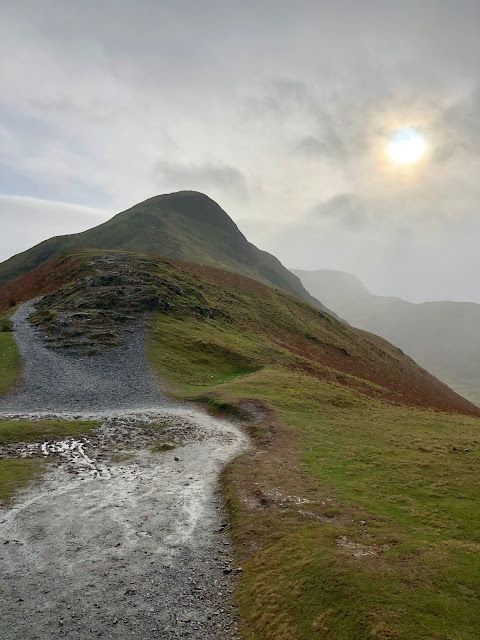 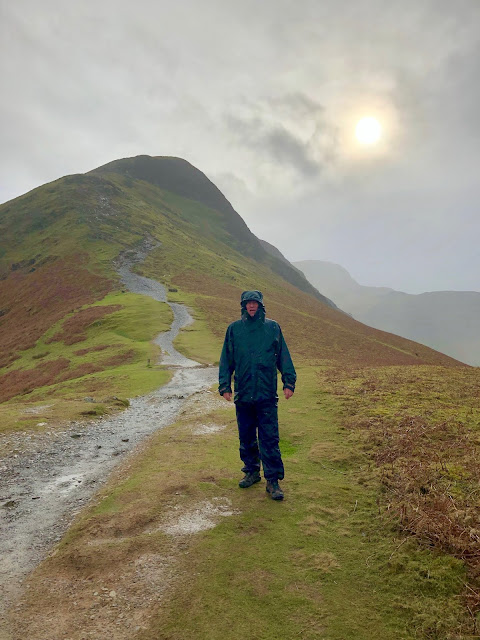 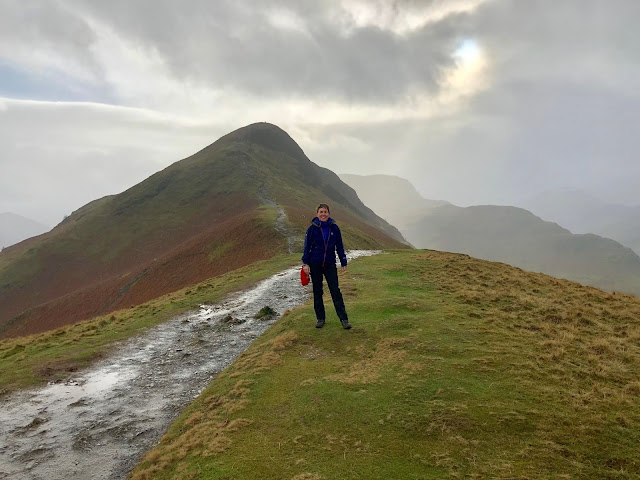 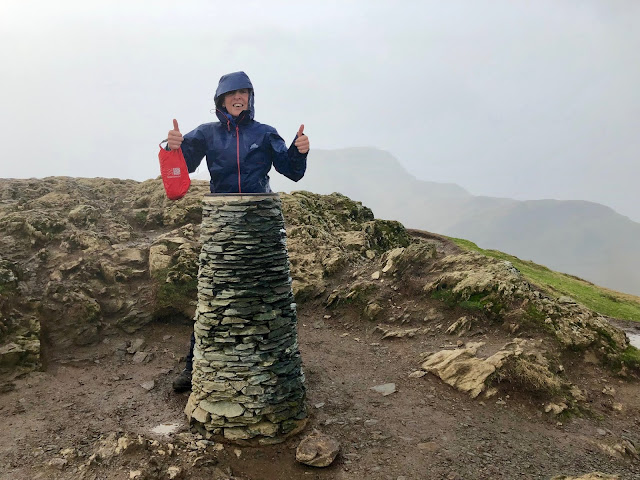 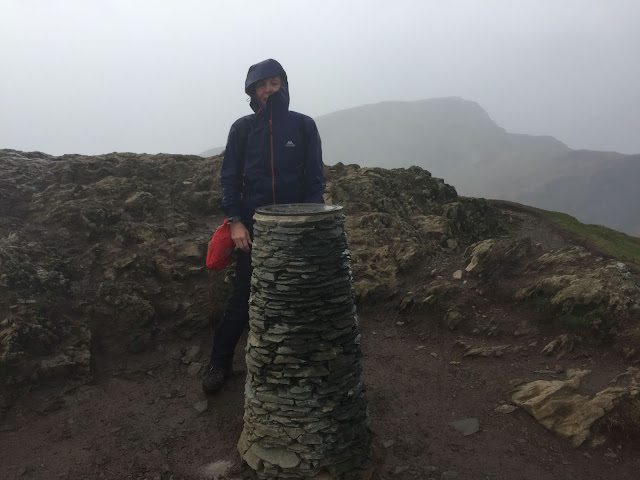 Oh no normal service has resumed...I'm synge bagging in the Northern Fells tomorrow, so if you could kindly keep away from there that would be excellent ;-)
Catbells is always worth a couple of hours..it can catch the weather though...good to be out I'm sure.
MWIS seem to think it should be dry...ish tomorrow.
Enjoy
Cheers Alistair

Cheers Alistair, It was an enjoyable couple of hours but I’m glad I wasn’t walking in it all day. We are not heading behind Skiddaw tomorrow so you should get clear sunny skies with temperatures in the mid teens. Ha. Enjoy whatever and we will look forward to reading your account.

I love those photos - there's a touch of Mordor about one or two of them.

Strange thing about that kind of weather: if it's already like it when I'm putting my boots on it could easily persuade me not to bother; but if it turns that way once I'm out and about I just put it down to part of the deal when it comes to walking in the UK and don't mind much at all.

We've bought a cheap pop-up shelter, which we've used a couple of times. It's very lightweight and I don't know how long it will last, but it's a bit of a laugh when we're hungry and the wind is howling. One of these bothy bags might have been a better idea, so maybe one of those next time...

Thanks Dave. Your comment is appreciated. We buy expensive waterproofs so we should get out there. We actually love walking in the rain, but not so much the strong winds we’ve had of late. Erm, bothy bag, not for me but for group safety of youngster maybe.

Many years ago, on New Year's Eve-eve we visited Cat Bells and I was absolutely stunned on our approach from Maiden Moor by how many people were atop it. I have never, before or since, seen so many people on a summit. In fact, I'm sure I've done some extensive bagging trips where I've seen fewer people across all of the hills than we saw on Cat Bells that day. Admittedly, we did have stunning, clear conditions.

Hi Gayle, yes it’s one of the most popular tops, especially on nice days with it’s height to distance ratio, it’s extensive viewpoint and proximity to Keswick. I think it’s a good top for those just after a short outing but make no bones about it, with the erosion on the final summit on the Keswick side, it can be a bit off putting for some.

At least Cat Bells did not have masses of folk heading up. When I came through when doing the Cumbria way, there was a nose to tail throng heading up, scary stuff! Well done though, good to see you both getting a bit of hill time in.

Hi Dawn, yes I suppose the bad weather was an advantage although Sheila just might disagree. We are finding time in between hospital visits to get out and do some walks. Hopefully we will be able to push the boat out a bit more soon.