I joined an evening walk organised by Martin Banfield   last night around the Rivington area of Bolton.
Once all 6 of us, Martin, Sue, JJ, Viv, Don and myself had found the parking spot and dressed accordingly we set off at just around 7.30pm.

It was obviously dark, but not completely pitch black and reasonably warm at 7.5 degrees C.  I had brought gear prepared for a bit of a chilly, maybe even a frosty evening, but the forecast said probable showers around 9.00pm. I was a little warm but not overly so.

The Hall Barn soon became visible along our NE path. The barn is of Anglo Saxon Cruck framed design. It’s build date is pre Norman Conquest but was restored in the 17th Century.
Today it is mainly used for functions. 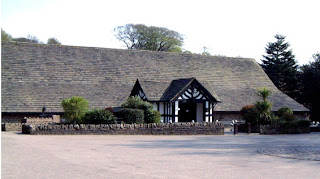 Rivington Hall Barn
Once past the barn we entered farming land that was a little squelchy under foot in parts and in the darkness care was needed to avoid a full boot or trail shoe in my case.
Coming out on a narrow lane with a small car park we turned to admire the light show of Bolton.
Following a narrow lane first SE the S we passed a restored tower which Martin informed us was a Pigeon Tower built by Lord Leverhulme. (See, i was listening). 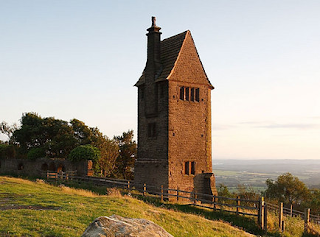 Pigeon Tower
A little further on we could see the silhouette of another tower and this was to be our highest point on this walk at 362 Metres.
Rivington Pike Tower was built in 1733. Built from local stone and once a shooting lodge, it has been restored although there is now no entry point. The doors and windows bricked up. 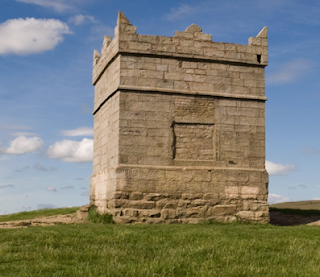 Rivington Pike Tower
The rough bricks around the base are the original footings, which over the years erosion of the surrounding soil has left exposed. It was quite windy here and we sheltered in the lee of the walls and again admired the light show of Horwich and Bolton. We looked across to find Blackpool Tower but it wasn’t evident tonight.
Some care in the darkness was needed as we descended from the tower back into muddy farm land. A steep descent down to a lane brought us in sight of Rivington School where the path was taken leading past Rivington Lodge and onto The Castle on the side of the reservoir.
This “Castle” is another Leverhulme Foley and was built as a copy of Liverpool Castle.

“The Castle"
Rain was falling now although nothing heavy. It was only a short walk from here back to the cars so after a brief glimpse across the water and around the ruin we headed back. 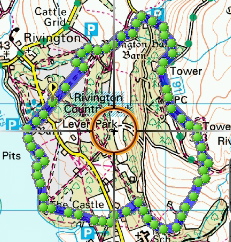 The route, which i thank Martin for organising was 7k long and took 2 hrs with the occasional brief stop for a chat with good company.
With this being an evening walk none of the above photographs are mine but were imported with gratitude to contributors of Wikipedia and Google Images.
Posted by AlanR at 9:36 PM

Very good, Alan, you've beaten me to it as usual. We needed you at the quiz night though...

Thanks Martin,
I'm sure yours will be more detailed. I am not a big fan of quiz nights to be honest. I hate that "Quiet please, quiz on", when it's a public house.

We used to have quiz night on Tuesdays down the Axe. Spoilt the week, it did. All the teams seemed to cheat using mobile phones etc as well. Spoils a good beer, it does!

It certainly wasn't quiet....not on our table anyway!

The chips were good, the beer even better. Oh and the company and the walk was good too!

THe quiz should have been Axed! Flattens the ale so it does.

I don’t know why but i can imagine your table being a bit loud JJ.
Hm Beer, and chips.
Oh and the walk. Couldn’t see a thing. Did you go.Ha