And so to the ferry

After what was a delightful few days in Nelson, we headed off again for Picton where we catch the ferry to Wellington. Sheila and Dorothy are especially looking forward to getting into Wellington due to the arrival from Sydney of Sheila’s sister Debbie, who they have not seen for 6 years.
I had wanted to do a days walk on the Queen Charlotte track and then spend a night out somewhere around Portage on the Marlborough sound but the ferry was booked and excitement was high about the meeting.
The minor road to Portage is not that far off the highway to Picton and so it was decided to have a drive there and just take in the atmosphere of the area. 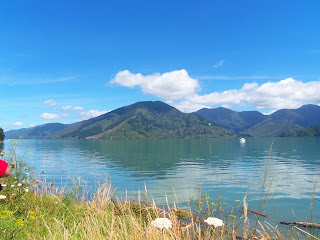 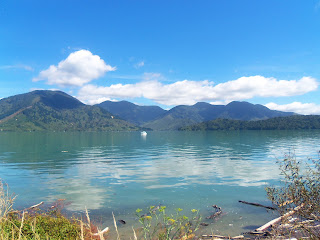 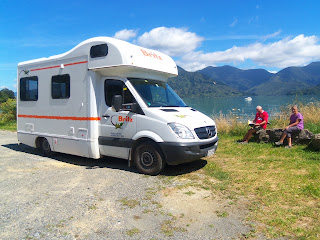 The road into Picton from Havelock is especially beautiful, and although steep in parts, it’s not to be missed.

On arrival at the motorhome park in Picton the lady in reception was a bit surprised that we had taken the large vehicle along that particular road, but i didn’t think it was too bad to be honest.

It was a really noisy night with our sleep broken many times by freight trains and HGV’s heading to and from the port. This happens to be my 4th night spent on this site and it had never previously been so noisy.

We woke to a very grey day with the surrounding hills invisible by the low cloud. Having checked the weather forecast it was pleasing that our crossing to Wellington would be under improving skies.
It was also the day that we returned Manuka back to the hive.

Once on the ferry we headed for the private lounge that we had booked. Don’t get any ideas here, it wasn’t that much more money and it included extremely comfy seats, NO KIDS, and free food and drinks. Worth every dollar.

Another 30 mins after docking and Manuka was back with the rest of the hive having a well earned nap.
We were quickly greeted by staff from Britz who had been reading the blog and so knew the problems we had been having. Compensation was agreed Mr S. and in a fair way. But and there is always a but isn’t there. A sting in the tail was to follow.

Once the refunds were put back on the card we were asked if we would like to take the shuttle bus back into Wellington. We said "yes that would be great". We were told it would only be a few minutes and it would arrive right here. Brilliant.

A very pleasant chap dropped us to our hotel 20 minutes away and we thanked him. I was about to tip him when he said that’s $50 please. What! we couldn’t believe we had been so stupid. We thought it was a Britz free shuttle bus but it was just an everyday taxi but without the taxi signage.
I think Britz need to make this clear to customers in future as it could have been very embarrassing if we hadn’t got $50 at that moment.
The driver said “ No it’s not free from them (Britz), they are not like the others”. What ever “like the others”  means. Anyway a lesson learned. I hope Britz read this too.

So, we met up almost straight away with Debbie, who had got a taxi from the airport at a cost of $10. Now that sounds more reasonable and had a very pleasant evening catching up.
Posted by AlanR at 10:41 AM

Ah, the ritual mugging of the tourist! It gladdens the heart...
:-)

I suppose in the overall scheme of things it's peanuts. but still very irritating.

Looks like the rest of you day was excellent though!

Hi Alan,
I wouldn’t have argued with the taxi guy anyway. He was very big.
Yes, it was a good day. Wellington was hellishly windy though. Not unlike being on a top in a gale.

Ah, the Wellington winds! I remember when I first arrived there - occasionally the force of the wind would stop me dead in my tracks, the effort I was putting in to walk forwards with a heavy backpack on was only just equal to the power pushing me back! Looking forward to future posts on this one!

Hi Chris,
I couldn’t have put it better myself. We got literally blown into a shop doorway and our accent gave us away as visitors and one passer bye shouted above the noise of the wind. “Welcome to Wellington”.