Dreich, Dreich and Thrice Dreich.
The forecast was dry with reasonable temps, 8 degrees.C.
It didn't happen.

What a difference between last weekend and this. Last weekend we could clearly see Jodrell Bank Telescope, about 30 miles away. Today at times 100 yds. 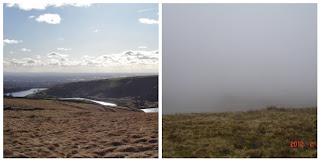 Last Weekend and This Weekend
A fellow blogger from the North East recently said that we don't have proper bogs in our area, Well, let me tell you fellow blogger, we found loads of them today, reet good un's and that was without seeking them out.
Some of the paths were bogged down too. 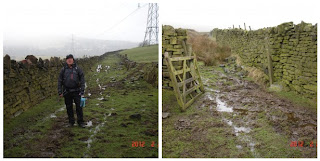 Passing through a farm yard, Sheila spotted a well known TV vehicle. She said "Now we know where Zaks going". It was the Dingle transit from Emmerdale, the Soap. 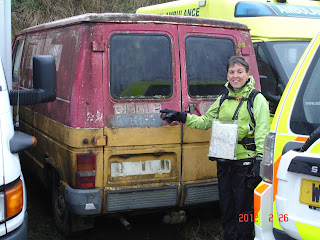 The Dingles “Shed”, Van
Just digressing. It seems that Zak Dingle is having some mental problems and he left his van somewhere with the keys in it. It was found by Jimmy King from Emmerdale haulage.
And as it would happen, as we walked on a bit we came across Jimmy's van too. 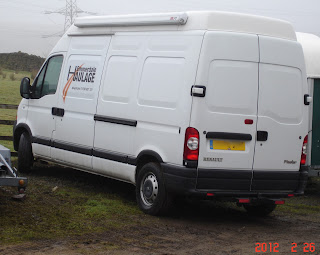 The Kings Van
What a mess this route was becoming. Obviously used by 4 x 4's, tractors, trail bikes and more. 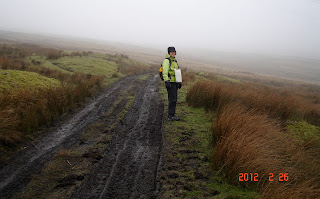 Our next path, was clear of wheeled vehicle tracks, but was a complete mud bath and it was not a day for the Inov-8's.
I was shin deep in the stuff.

A couple of times we went a little astray and our barbed wire moment at Spring Mill reservoir had to be retraced due to lack of forward pathways. Sitting down for a minute it was obvious where the mistake had been made. A little detour and a short climb and we were back on track.
The dead sheep in the bottom right below was only one of numerous dead we saw on this walk. Considering that this is a reservoir i am appalled that the water board have not done something about it. 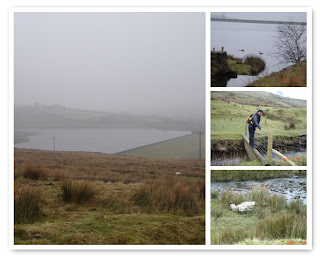 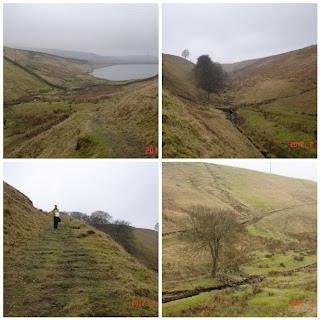 Bagden Quarry
Summary of Surviving Remains:
A hillside quarry, opened in 1885/1886 by Henry Heys Junior. It was on OS maps as Disused in 1894. So only a short working life. The working face now mostly obscured by slumping and moorland.
The spoil mounds, located to the east are still well defined with some vegetation growth. There are also a series of identifiable structures and features associated with the quarry. These include a number of quarrymen’s or blast shelters , a tramway , a probable winding house and a series of processing areas. The processing areas are particularly well defined and contain stacks of stone blocks and flagstones.
A small waterfall emits from the quarry edge into Fern Isle brook. 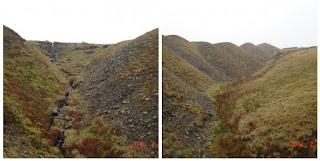 Waterfall and spoil heaps at Bagden Quarry. Disused.
Once across the other side of the quarry we picked up the Rossendale way. The marker pointed forward and Sheila stood atop a large ladder stile and said “Forward Where”.? Forward through that bog came the reply. Please note another mention of a bog!
The crossing was particularly boggy with no way of avoiding wet feet. Notice the boggy bit again!
Eventually we hit a cart track which was a bit boggy. No i won’t mention the bog again. oops.
And at this point Sheila noticed that her Seal Skinz hat had come off her hipbelt. Oh Silly me, i think i heard.

So, you can guess now what the next sentence will be.
Ok, your right.
I did the chivalrous thing and went back through the wet squelchy, stinky, morass thingy to try and find it. We crossed quite a high stile about 300 metres back and this was to be my point of furthest search. I found it just at the foot of the style and as i turned round to wave that i had found the hat, the mist rolled in and obscured the view.

Retracing my path with water squelching bubbles out of the Inov-8’s, we decided to stop for lunch at this point.
The temperature was noticeably dropping as we sat in the mist emptying the rucksack.
On today's menu was Chilli Con Carne and Rice. The CCC was from Aldi and cost the grand sum of £1.49.  The rice was prepared at home and along with 20 mm of boiling water put into a Vacuum flask.
With a good vacuum flask the rice will stay moist and warm and saves preparing it on the hill.
On this occasion i took the Trangia with a non stick pan to cook the Chilli and it was very nice. 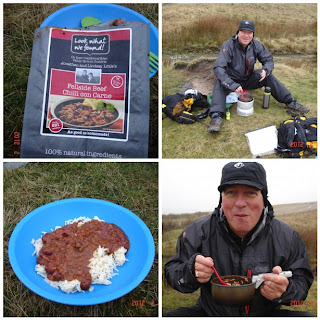 Post lunch we walked on until we joined the Pennine Bridleway. 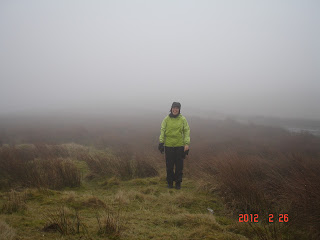 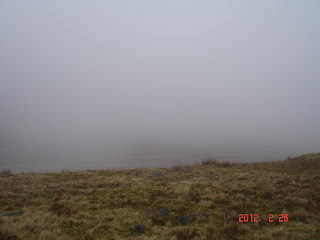 The mist was well down now and although there was still plenty of day left it looked like it was in for the day and so we headed back to the car. 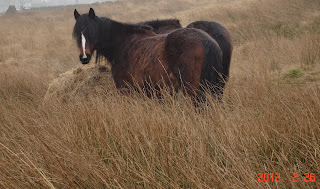 These guys and gals didn’t seem too bothered anyway.

Calling it "the wet squelchy, stinky, morass thingy" is a nice way of avoiding the b-word ;-)

Isn't the Trangia lovely! I have a problem with it: it is fool proof, sturdy, has an excellent wind shield, could even be used with gas to fully utilize the simmering properties of a gas stove - but it takes awfully lot of space in the backpack! It is not so much about the weight, it more about the bulk. Using the Trangia pots with an Express Spider might be a good alternative - although that is of course not as sturdy an option.

Thanks Maria. Did i mention the B word?

The Trangia has stood the test of time. That says everything.
With the tendency to get pack size and weight down, there is not enough room for the windshield. But the burner combined with a different stand and foil shield is just as good and takes up no room.
On walks like this one or even an overnight the complete Trangia set up is great. I found that i simmered better with the Trangi burner than i did with the spider. But there is no doubt at all that the Non stick Trangia pot was simply the best.

I’m not mentioning that B word for a while Mike. House now full of stinky, wet, dirty foul weather gear and shoes similar. Must get them washed today before they crawl away.
I look quite warm in the photo of me having scran, but i was freezing.

One thing that surprised me was that you didn't come across any bogs on this walk. Maybe they were hidden in the mist.

Hi Gibson,
I thought i mentioned the bogs, must have been a slip up.
Thanks, glad you like the pic layout. It takes a bit longer to do a post but worth doing occasionally. Just makes the posts look slightly different than the last.

No slurry then? Perhaps that's a Cheshire thing? I don't think the Yorkshire folk have it either....

Hi Martin,
Funnily enough, No, No slurry on this walk. Although they were spreading it near me today. It was ripe.

The Dingles' red and orange van is a Renault Trafic, not a Ford Transit.
Scuse the pedantry. Great pic!