A delightful, if somewhat chilly day meant we were out in the hills. All wrapped up and probably wearing to much.
Our walk today included a chance to try out the Wayfayrer meal and pudding which they had sent to me earlier in the week prior to their release into the shops.

As we left the car, a couple of dogs from some small holdings, which were in our direction started to bark loudly. Sheila was hoping they couldn’t get out. As it happened we skirted away from them and then peace was restored and we were left with job of a short incline up to the mast on Hunger Hill. The views were exceptionally clear today. And as we turned 360 degrees to admire the landscape only the wind turbines on the next ridge line broke the scenery. 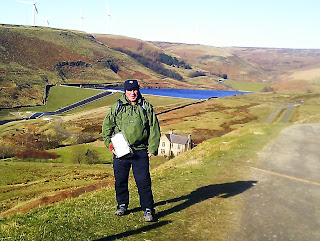 On the way to Middle Naden reservoir 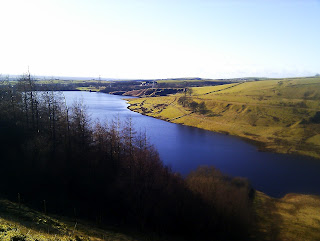 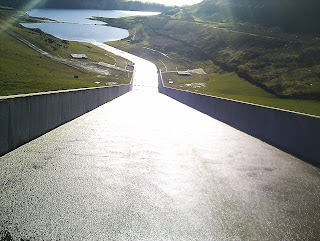 The outflow of Middle Naden Reservoir 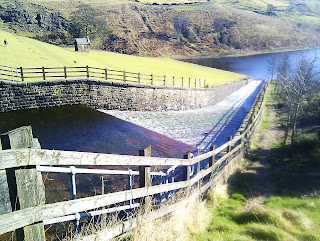 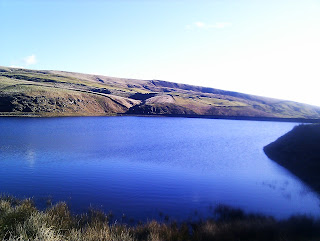 Upper Naden Reservoir
Our way up onto the moorland was via Naden Brook, where 3/4 of the way up we found a suitable spot to set up the stove and try the Wayfayrer Spicey Meatballs and the Sticky Toffee Pudding. 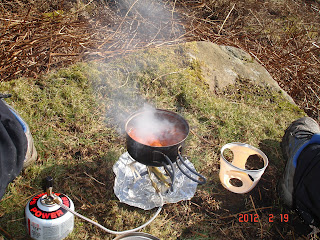 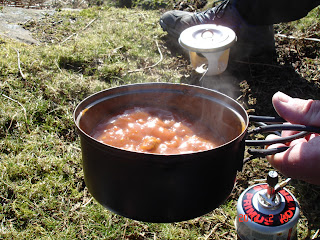 Wayfayrer has been around for a long time but for us, it was a first try.
Cooking the Meatballs.
Notably the food is ready made so no rehydrating to do.
The meals can be eaten cold if all else fails but preparation is easy enough. You can boil them in the bag for around 7 mins or pour them into a pot and heat them.
We chose to pour them into our 600ml pot. The meatballs were small in size which is what i was hoping for. Simply because it would take a lot longer to heat through if they were any bigger and of course your gas is at a premium.
Taste
Good aroma whilst cooking and a good colour too. I kept trying some of the sauce as it was cooking and it was nice and spicy with a good consistency without being overpowering.
The meatballs had good texture and didn't fall apart during transportation or cooking so that was a bonus.

Tips
If you cook these in the hills as we did then best method is to boil in the bag. But a larger pot would be required than we had with us on this occasion. 1Litre minimum.
If you would rather heat them in the pot then a non stick pan is recommended.
We used a titanium pot which heats up very very quickly and i had to be really careful not to burn the food. Simmering on most small camping stoves is also not easy when the wind is swirling around the stove, so this doesn’t help and takes a bit longer to cook through.

We thought that the single serving was a little small for us. If we had done a hard days hike rather than a couple of hours we would definitely require more.

Surprisingly, the energy per gram was a little disappointing. Per 100gr the Kcal was only 125. Or 1.25Kcal/gr. I would want much more for backpacking. 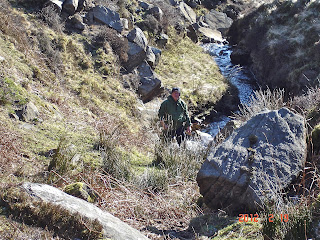 That's me washing the pan between courses.

Cooking the sticky toffee pudding.
I was a little worried when i packed this into the rucksack. I expected the pudding to fall apart.
This wasn’t the case. The oblong pudding was robust and still well covered with syrup.
Due to the problems i flagged up earlier with the cooking pot i had to break the pudding into smaller cubes so that it would cook properly.
It may/may not look appetising in the photo below but it was in fact very tasty. There was actually more of it than i expected.
Taste
My thoughts are that it was very much like a syrup sponge which i also like but a little stickier as you would expect.
The pudding itself was a bit chewy, a bit tougher than i expected which shows why it had remained in one piece during transportation in the pack.
The sticky toffee was very nice.
I found the quantity a bit too much and i couldn’t finish the portion.
Tips,
Same as the main meal.
Again the energy amount per gram was disappointing but better than the meatballs. 2.93Kcal/gr. 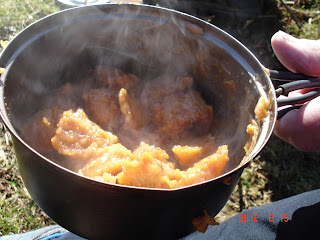 Sticky toffee pudding.
Costs.
Main Meal £4 RRP and £3.50 RRP for the Pudding. Available at outlets like Blacks and Millets. 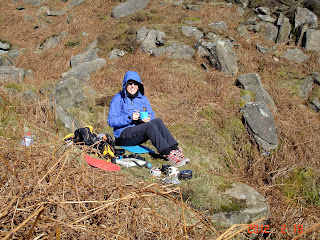 Our lunch spot was in bathed in sunshine and so good to feel the rays. The view (below) was indeed worthy of lingering while we had a second helping of coffee. 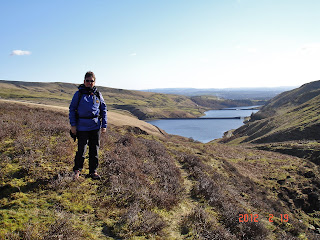 And then it was onward and upwards to Ding Quarry. Just visible on the skyline. (Pic below) 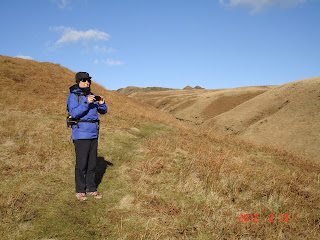 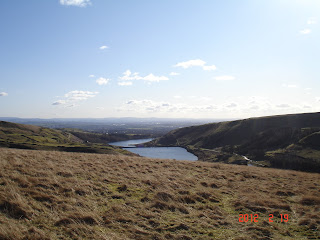 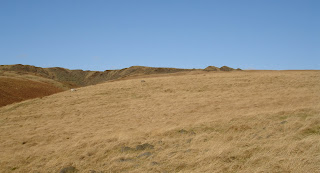 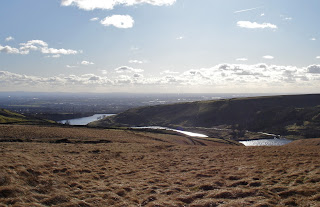 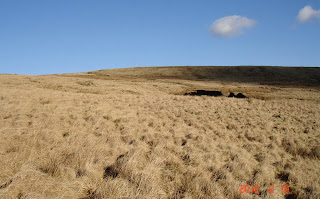 Leaving the paths behind the colours of the moorland bathed in sunshine and dry at this time were an absolute pleasure. We saw nobody for quite some time, so peaceful except for the odd ewe we disturbed. 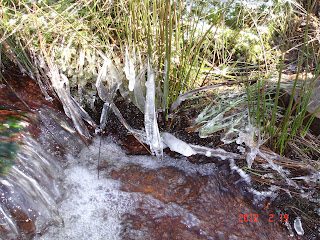 Coming across a small beck winter still reminded us that it wasn’t over yet. With the lovely crisp day we could expect a probable frost this evening. 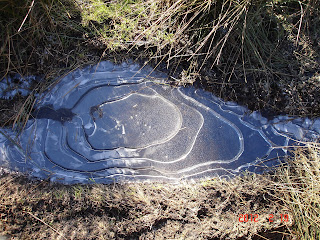 What a fabulous day you had with good quality light for photography it seems. And hot food as well - what more could you ask for?!

Very informative review but a pity about the kcals/gm. Still, the meals sound tasty and worth a try in the right circumstances.

A cracking day Alan, always good to combine food with walking or cycling. Every good boy or girl deserves their reward! I've never tried the Wayfarer range so thanks for the review.

Hi Gibson,
Sunday was a gorgeous day. One where you just wanted to stay out on the hills.

Hi Al.
I have deleted one of your comments. For some reason the same comment appeared twice.
Ideal for cycling i would have thought. Give them a try.

I have always enjoyed them - worth taking for short weekend trips but not for longer backpacks because of the weight. At a pretty reasonable price, too.
I shall look out for that pudding.
:-)

Not much bang for your buck, but what a fabulous walk you had. Like Alan S says, the meals seem to be ok for a day or two, but any more and you'd either starve, and therefore not move on, or be weighed down, and also not move on.

Hi with your Alan S.
Yes the price was a bit of a surprise to me too. I did get confirmation of that prior to the review.
I also agree with you on usage.
Pud's very nice, but boil in the bag best cooking method.

Hi Carl,
Yes, considering that it's whole food you would have thought that the Kcal/gr would have been higher, but that was what is printed on the packet.

Sometimes the Al's are confusing.

I agree with you regarding titanium pots. I have a 1.3 litre Vargo ti pot (which is basically the same as the 1.3 litre Evernew pot without the handles - it even reads "Evernew" in the bottom of it). It has a non-stick coating, but it still burns the food very easily if you are not careful. I think I prefer my old Trangia pots in HA aluminium. They seem to heat up more evenly.

Thanks Maria, a lovely day out.
Yes, the old Trangia pots would be more suitable i agree.
The Ti pots are great for boiling water for dehydrated foods and that's about as good as they get.