We went to pick up our hire car and i was really looking forward to driving the Ford XR6 or the Holden equivalent.
When we were told we had been upgraded, i thought "Yes", a V8 maybe.
Unfortunately we were upgraded to a Suburu Forester AWD. 2.0L turbo. Gutted, i can tell you.
So this was our vehicle for the next few days as we made our way back North to Auckland.

Our upward journey was into the Tongoriro national park, for an overnight stop before heading off to friends who live on the banks of the Waikato River at Reparoa, North of Taupo.
Debbie had booked a very nice lodge in Ohakune, with a great view of Mount Ruapehu. 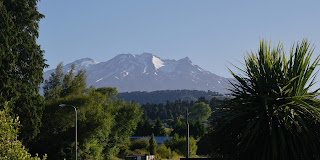 View of Mount Ruapehu from our lodge in Ohakune.
Once we had got ourselves settled in, we headed off into town for a beer and something to eat. What a disappointment, it was a pretty dead place. This area i believe, is packed during the winter but quiet during the summer.
We decided to eat at the Alpine Hut Wine bar and Restaurant, and it was not a good decision. Without any shadow of a doubt, and we all agreed, that this was, by far, the worst meal we had during the whole
5 weeks in New Zealand. 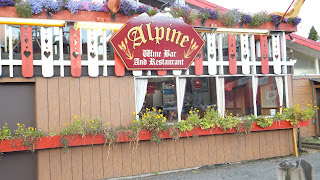 We had a quick look round town and as you can read below we obviously went to the wrong venue. 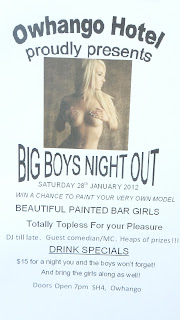 And so we  headed back to the lodge for a few beers at home.
It got pretty cold overnight and we stepped out to find it was still -4 C at 9.00am.
It was a bit of a shock to the system but it was nice and crisp.
Looking at the map and some brochures left in the lodge, it was a shame that we couldn't spend another day here as the walking choices were excellent. But we had to meet up with Janet in Taupo. Janet was a friend of Sheila and Debbies going back 20 years or so. I had never met Janet or hubby Spud before.
Janet met us as arranged, and guided us to their lovely home in Reparoa. Being directly on the river, all the family are interested in fishing and water sports. It wasn't long before we were in a speed boat heading up river to Spuds favorite fishing spots. We had a great afternoon and then it was back for a barby and a few beers. The early hours very soon came around as we discussed old times. Thanks for a super day. 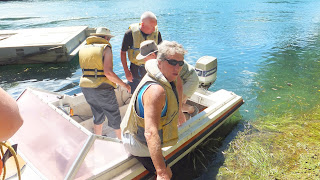 The next day we unfortunately had to leave Janet and Spuds. We had booked a beach front apartment in the resort of Tauranga.
Upon arrival, it was noticeably busy in town and then we realised most people had a ribbon around their necks with a card attached which meant they were off a cruise ship. As it turned out there was 2 ships in harbour.
We had another brilliant apartment with great views. 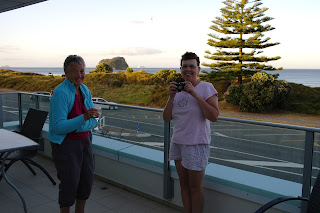 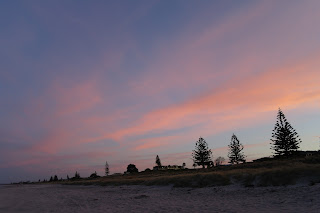 We were here for a couple of days and it's a lovely place. Overlooking the town is Mount Maunganui.
It's quite a bit steeper than it looked and its a good workout. 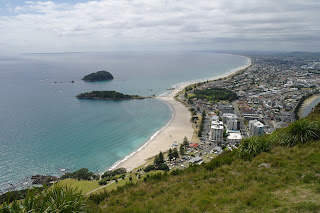 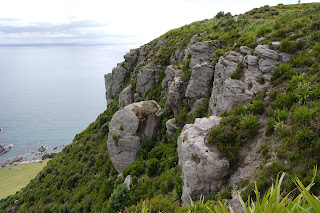 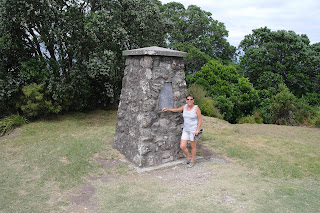 We set off up the mount quite early and i am so pleased we did. The day was very warm and on the way down we were passing people that looked like they had just completed the marathon. Lots of water needed consuming.
The views from the top were well worth the effort all the same. 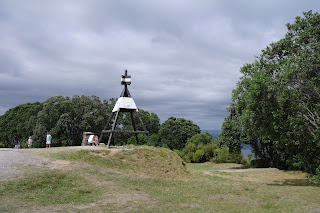 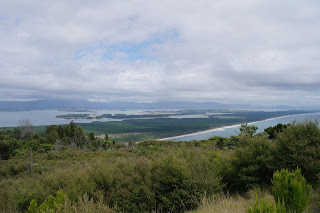 A very enjoyable morning. Time seemed to be moving so quickly now and the thought that this was our last week in New Zealand was a bit depressing. We still had the drive to Auckland via the Icebreaker Shop in Manukau to look forward to and a couple of tourist days in Auckland itself.
Time for a coffee now and a sit down.
Posted by AlanR at 11:57 AM

It's always a bit depressing coming to the end of a long trip isn't it? Looking at the pics I'm not surprised. My mum used to say that one trip has to come to an end for another to begin!

I take it you didn't think much of your 'upgrade' then?

I take it you didn

Hi Gibson,
Very depressing indeed. I know 5 weeks seems a long time for a holiday but it went so fast and there was so much more i wanted to do.
I was disappointed with not getting a V6 or a V8 to drive because in UK we are being beaten up by this government on road tax and fuel. In NZ there are no such restrictions and it was fantastic to hear the rumble of those beautiful motors.
The Subaru's Boxer engine is a nice engine with plenty of power, bland inside the cabin, and it sounded ordinary which wasn't what we intentionally booked.

I'd love a V6 or V8 but as you say we get clobbered by this lot in power.

I toyed with the idea of the Subaru turbo some years ago but in the end stayed with my now-getting-on-a-bit Saab turbo, which I bought from the Company when I stopped work.

Can't think what I'll get when eventually it just has to go. (Over my dead body I hear Lynne saying!)

Our little island, that is hardly noticeable on the globe seems to be being clobbered all ends up for this bl--dy global warming. It doesn't make much sense to me when you consider the massive territories on the planet are doing very little in comparison.
NZ, cheap fuel, cheap cars, road tax, no car insurance required and some lovely big powerful ute's, pick up's, 4 x 4's etc. No Global warming here as far as i could see.