Corserine at 814M is the central and highest point of tthe Rhinns of Kells, a long, high curved ridge which runs North to South between Loch Doon and the Clatteringshaws Loch in the Galloway Hills.
We parked up at Forest Bridge, just off the main road to St Johns town of Dalry. It was a surprise to find that there was only 2 cars on the car park. Considering it is a Bank Holiday i was expecting "Busy".
Sheila noticed a large kilted fellow and went to check out his sporran. 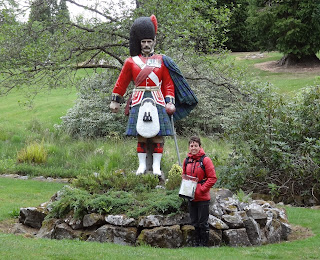 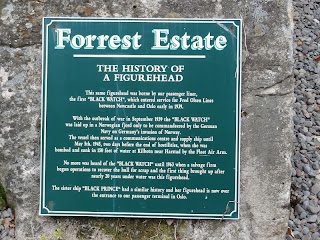 There was also this warning notice. Be back before 8pm or we call the police!
What's that all about then.
So the walk up from the car park to the stile over the deer fence was quite pleasant, especially keeping looking behind as height is gained and views open up.
The Estate had signposted the route to the fence which i thought was excellent as i didn't have to keep checking the map.
The OS map, even the 1:25000 doesn't show a path from the fence to the summit of Corserine but one does exist all the way. I wasn't expecting a path so it made for an easier ascent.
We were passed on the way up by 2 day walkers who were moving quite sharply. Altogether we saw 7 people all day.
As we passed a small walled windbreak the wind was fierce and extremely cold. Having sweated our way up it was quite a change. I donned my windproof but Sheila decided to go the whole hog and put on her duvet. Once we found the summit trig point the views were spectacular and we wished that the wind would die down. We walked in all directions from the summit to get good views and take photo's but the decision was taken to change our ridge walk and drop down out of the wind.
As we descended we passed another walker sweating his way up and he said that there was time for it to sleet yet. Summer in Scotland eh.
Once back at forestry level the wind was broken by the trees and we were able to undo the jackets and take the hats off. Loch Harrow which we bypassed on the way up, seemed an ideal spot for lunch so we headed there. It was good that we only encountered a few midge over lunch which didn't bother us too much.
This only left the walk back through estate forestry tracks before reaching the car park. We were back well before 8 so the police had a rest day, well from us anyway.
Sorry about the lack of photo's but it took forever to add the one at the top. If we get a better signal i will put some on of the great views from the top.