With the trail Cafe closed, i had to resort to good old porridge. I don't mind, i quite like it when i'm on the hill.

Last night started off very much the same as the previous night. I dropped off to sleep with the door of the tent open.
At around 1.00am i was awake, it was raining and it was coming through the mesh door and onto my face. The breeze had also strengthened and having the tent end covers open it was like being in a wind tunnel. I closed the ends and shut the door. Hoping that it was just a quick shower i lay awake for a while but next time i awoke it was 4.30am and light. It had stopped raining and so i tied back the door.

Waking up and lying listening to the pipits starting a new day it wasn't long before i had the call of nature myself.
You can't put it off, so up i got and put on my 01M shoes. One shoe was very easy to put on and although i never thought anymore about, it became obvious 5 minutes later when i took it off that a slug had decided to rest up inside and had done a good tour leaving the slime everywhere.

This reminded me, yesterday, when i took my gaiters off, my right trouser leg was covered in slime. It come from a slug that had rested up overnight in the elastic ankle tensioners, and i hadn't spotted it when i put the gaiter on. It had been on the Cadair Idris round with us and obviously not been used to moving at such a fast pace had been travel sick numerous times. It was awful. Took ages to get it off.

Mike had said they needed to make a move to Machinlleyth to catch the train tomorrow. Mach's about 13 miles away. As my car was in the valley, i suggested i take them both to Mach and they probably would stay at the Bunkhouse there. I don't think Dawn was well enough to walk the entire way unfortunately.
If you read this Dawn, i hope you are feeling better and it was good to meet you.

We packed up and headed off down into the valley. We checked out some ruined buildings along the way, which looked very much like the Scottish Black houses. I must find out a bit more about them.

A chap stopped for a quick chat on his way up. He asked Mike what it was like up there and in Mike's usual way, he said "It's much higher than it is here".
The guy took it the right way, laughed and said he would remember that for the future. And off he went.

I dropped Mike and Dawn off at Mach railway station as access to the village had been blocked by a truck stuck underneath the railway bridge. 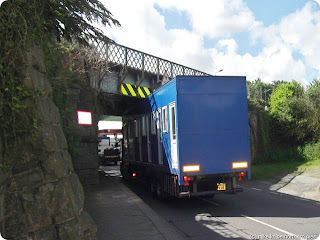 (Picture with kind permission from Mike)
We said our goodbye's and well, that was that. Until next time.

Was that the King Slug you were talking about? "A king slug had been sick on my gaiters..."?

Mike,i think we were too far apart for the King Slug but it may have been a close second. Just partaking of a nice slug of Whisky. good luck for the walk tomorrow .

Hello Alan, many thanks for the lift.True, I was not feeling that great.Mike and I are plotting another Welsh trip. This time travelling lighter. Hope we can meet up again sometime.

Good luck for Pumlumon, Dawn. Hope you feel better and sort the tent thing out.
Look forward to reading all about the trip.