When i was asked to join Mike Knipe and Dawn Linney on a Cadair Idris walk i had a quick look at their blogs for any further indications of what i was in for. On Mikes blog he had put "Pau" to light weight Wales. To those not understanding "Pau", it politely means something like, "I'm not doing that".
But you have to take things with a pinch of salt, which in Mike's case is probably more like a 2lb bag.

I was asked not to forget the barm cakes, which i didn't but i was still in 2 minds of what to expect.

Setting off from the valley foot at Minffordd i had a quick scan at the lovely aerial photo of the Cadair Idris range before picking my way slowly, up some quite steep steps through deciduous woodland. 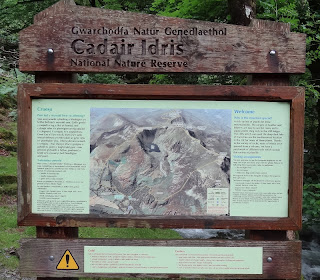 The rain that had been my traveling companion for most of my drive had now stopped and the clag was lifting quite quickly. The swollen river, Nant Cadair to my right, was looking grand with the waterfalls in spate. 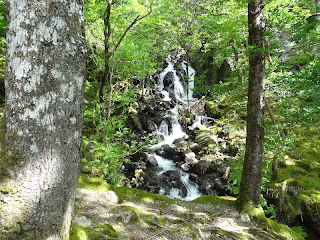 I was wondering what kind of a night Mike and Dawn must of had because this area had seen torrential rains over the last few days. I'm glad that i had missed it.
The sun now filtering through the birch and oaks was really warm and i had to peel off a layer of gear to cool down.
Considering this was a Sunday morning i expected the path to be teeming with day walkers but apart from one other person i had the ascent to myself.  This didn't last though as the procession grew by the minute.

Mike had text me the OS grid reference, so i knew where they were camped and as i got to the level area before Lyn Cau i spotted Mike stood atop an outcrop, waving. I could just make out the 2 tents below. 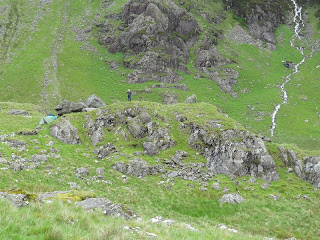 Mike doing a Durham wave
Once greetings exchanged Mike asked if i'd had breakfast. Which i did, about 4 hours ago. He offered to make me a sausage stottie whilst i put my tent up.
He set about frying sausages and the smell was wonderful.

What i quickly came to realise was that Mike and Dawn were trialing opening a walkers cafe, but unfortunately they were a bit far off the main track. Sausages, Bacon, stotties, barm cakes, potatoes, onions, cheese, Steak casserole, Chocalate sponge cake, custard, as well as all the usual dehydrated stuff was on the menu.
So Pau to lightweight was actually fact.

We had a chat about what an awful day and night it had been with constant rain. Finding a pitch had been a nightmare for them as everywhere was flooded or boggy. Eventually they had found this spot which gave some respite from the howling, tent bashing wind. Mike's tent was looking rather sorry for itself and it may be seeking retirement very soon. 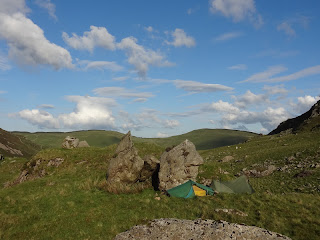 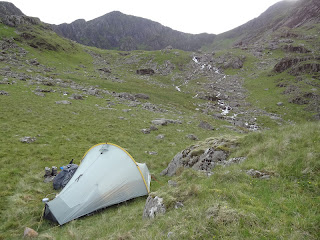 I found a reasonable spot to pitch although it was on sphagnum moss and was a little spongy. That was the best i could find within a limited area. It turned out to very comfy and as it didn't rain much again, it proved ok.

The forecast was for good weather over the next 3 days with Monday being the best. Mike had some tops he wanted to tick off and so it was decided to do the Cadair Idris tops tomorrow.
This now meant going back down the hill i had just walked up and veering off, across Nant Cadair to pick up the path across Moelfryn. 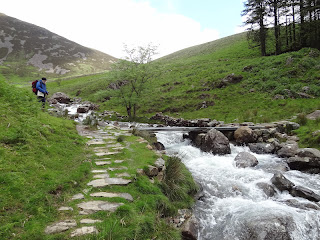 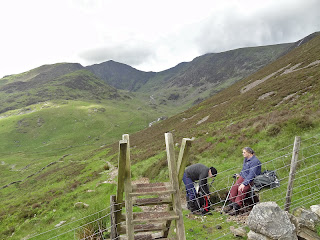 As we reached the stile into open country, Dawn was feeling a bit under the weather and after a brief stop she decided to go back.
The top that Mike wanted was at the end of the ridge, above Gau Graig, 683 metres with a small cairn.
For a while we followed the path which rises steeply to Mynydd Moel but when we reached the 650 metre contour we veered off above some scree and eventually joined the footpath between the 2 tops. A fence stays with the path the whole length to the 683 top. Very boggy in places.
We had lunch here with good views of surrounding mountains. The weather being very much our friend. 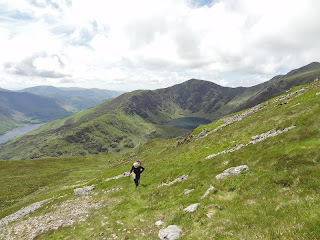 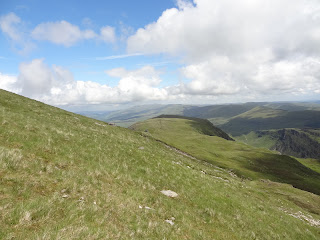 
Once Mike had taken out his marker pen and put a big tick on the cairn, (just joking), we retraced our steps to the point where we joined the path earlier. From here the track rises steadily with improving views west and North. The top of Mynydd Moel 863 metres, is a wide expanse of good grass and boulders with the summit having a fairly large sized stone wind break. Luckily for us the summit was calm and so we were able to take in the beauty of the surroundings. 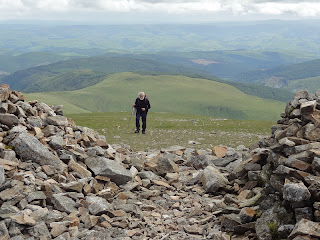 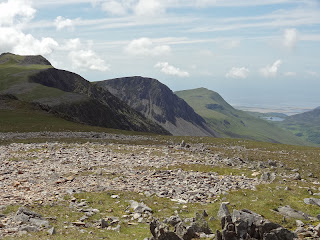 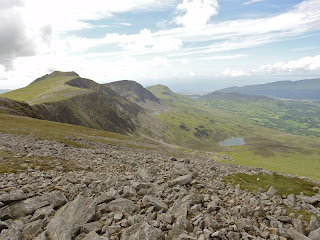 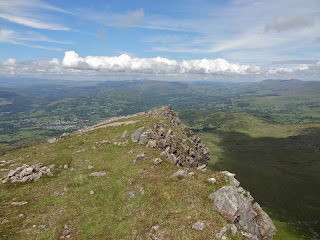 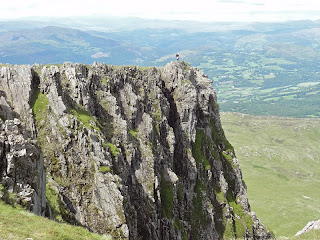 Mike on the end of crags North of summit 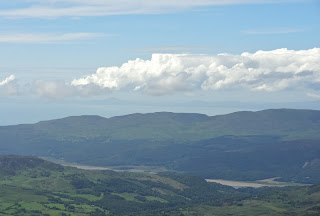 View NW
West of the summit, the fence line is reached whereby the descent can be safety made if it's bad weather.  Pretty steep and slippery in places but a well used and in places repaired track brought us back to the bridge over Nant Cadair. 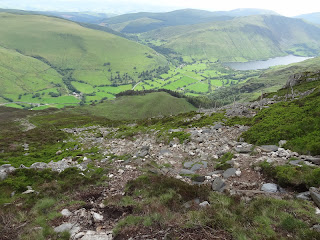 Path down, with Tal-Y-llyn in background.

Back at camp i think Mike and Dawn were dining on Potatoes, Onion and Cheese  followed by pud and custard. The table was laid with the most expensive cutlery, titanium spoon/fork.
I retired to my dehydrated  Bla Band Risotto with mushrooms and chicken.  When first opened it looked far too green. We eat with our eyes first i am told, so it didn’t say yummy. However, i admit that it tasted wonderful and it will be on my list next time for sure.

It had been a good day.

A good read Alan, I love Stotties can't get them down here in Oxfordshire, always stock up when I head back to Durham. Cadair is a great area especially when it is quiet as the views are fantastic. I know exactly what you mean ref the route down from Mynydd Moel can be very slippery in places, speaking from experience.

Thanks Phil, and more to come.

Looks a lovely area Alan and you've got some excellent photographs. And to have your own chef to cook you a second breakfast on arrival at camp is luxury.

It is a lovely area Gibson and there are ample backpacking opportunities. We have a cunning plan.
It was difficult to resist the big/fat sausages and the chocy roll and custard later. Spoilt indeed.

But both have their place and time: lightweight backpacking and freeze dried meals, and more heavyweight alternatives and "proper" food.

It came as a shock to me. Real food. Although I was pleased with Bla Band too.

It is a lovely area.
One day I am going to do the Cambrian Way.

Hi Andrew, Mike and Dawn had a couple of bad days but I was lucky.
Cambrian way is quite a tough walk, but I,m sure your up to it.

Nice to meet up with you Alan. My apologies I could not participate a bit more.

Hey Dawn, Hope you feel better. Sorry you had such a rough time of it. At least you had a couple of good weather days.