The Duddon Valley Fell Race is an annual event and is a classic race. There are 2 races at the same time known as “The Long race and the Short race”.  For obvious reasons.
Unfortunately this year, it clashed with another race and so numbers were slightly down on previous years.
This time we had 137 runners in the long race and all but 4 made it round the 18 mile circuit that has 6000ft of ascent. The short race had 33 runners on it’s 10 miles circuit with 3000ft of ascent.
Sheila and i marshal the check point on Swirl How in the Long Race, the highest point at just over 2634ft high and the most exposed. 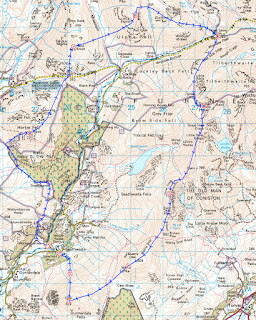 We had the bad news that the electronic “Dibbers” that we normally use, and which make life a little easier because all the information is downloaded from them, would not be available. Apparently the person who has them had been rushed into hospital and nobody could get into his house.
Lesson here to be learnt from for the future.
So, it meant that we would have to go back to the manual system of writing down every runner and recording the times and then double checking to ensure everybody is accounted for. (Not that we never double check anyway).
And also we were to have a 3rd marshal this year in the name of Paul Cox, an ex bobby.

Friday was a gorgeous day and we just hoped that the weather hadn’t peaked too soon. So Saturday came and it was almost as nice, just a little cooler and a bit of a breeze. Perfect for running.

So the 3 of us set off early to get a parking spot at Three Shires. It’s usually a very busy place and especially so on a nice day, and you would have no chance of parking if you left it till later. The unfortunate negative is that you get to the check point too early and if it turns out to be a lousy day, then it can be a bit miserable.
As it was, our “newbie” was raring to get up there and he set a hell of a pace up Wet Side Edge. It turns out that this was Paul’s first fell race marshalling and he was full of enthusiasm and couldn’t wait for the runners to get to us. But like i said earlier, we had 2 1/4 hours until the runners got there.

Finding a nice seating place we talked and admired a wonderful panorama. The time flew by. 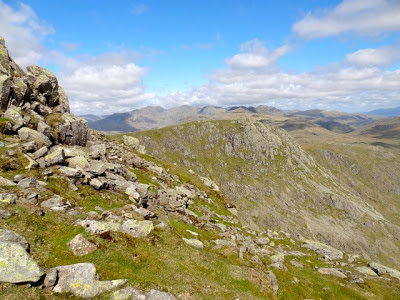 Great Carrs in foreground with Scafell Ridge line behind. 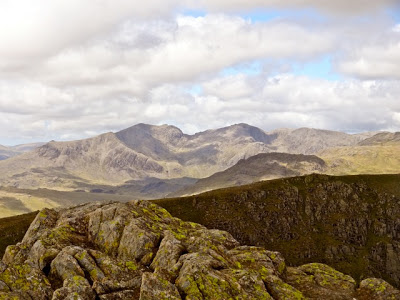 Great view of Scafell and Scafell Pike
The ridge line was quite busy with many very large groups being guided. Spanish, German and Americans.
We also had numerous people whom, even on a perfectly clear day and with maps, thought that they were on a different summit to where they actually were. A lot thought they were on Wetherlam rather than Swirl How.
As usual we had lots of interested people asking about the event. Always nice to talk to folk.
The airwaves were getting busy and race control kept us informed of runners progress and any retiree’s. etc.
The first group of runners got to us at around 1.00pm, 3 came almost together and looked very fresh, like they had only ran 100yds. The last runners came to us at 3.00pm and looked shattered. Cramps were giving them some problems but they carried on and crossed the finishing line. 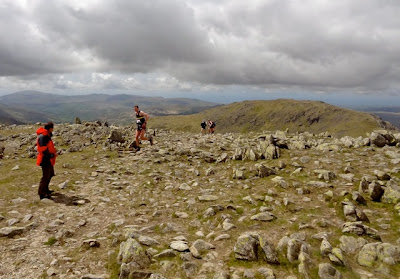 First runners through. The eventual winner is 2nd at this time.
Paul knew a few of the runners, being a local lad and ex Ambleside Policeman.

It all got very exciting when we were visited by a Rescue Helicopter. It just looked like a practice and it had nothing to do with our event, thankfully. 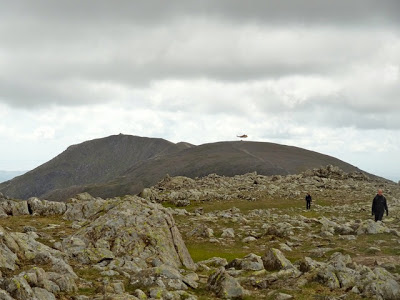 Rescue helicopter above Brim Fell
The weather started to change, the clouds started rolling in and getting blacker with every minute. The wind picked up and the temperature plummeted. Ok if you could keep moving but for us we became very cold. The layers started to get put on, the down jackets, the windproofs and then the waterproofs.
Trying to write when your hands are shaking and numb is not that easy. Also the noise of the wind was giving us a few problems with hearing the runners numbers.

Paul had now gone from very excited to wishing those last runners would come in so that we could get going off the fell. It looked like rain for quite a while but it never happened, thankfully.

Going through the numbers and cross referencing, we accounted for everyone and let race control know the status and that we were now closing the station and heading down. As we moved from our relative sheltered spot the wind was incredible and as we turned to head for Great Carrs we were almost blown off our feet. Not a good place to get blown off, as the drop is precipitous and about 800ft. 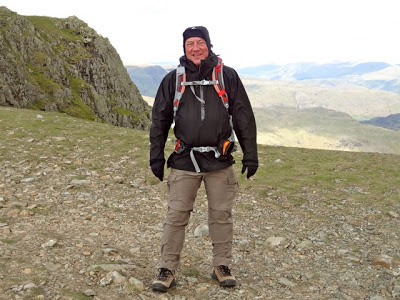 Top of Broad Slack with Great Carrs in background
Paul wanted to find the running line around Great Carrs and so we moved NE to accomplish this. We think he fancies running it next year.
Again the pace quickened and we had quite a struggle to keep up with him. He is definitely a quick fellow and it wasn’t long before we were back at the car. With some luck we just got back to the race field as the prizes were being given out.
Simon Booth won again in a time of 2hrs 55 mins 32 seconds. (I think this is his 5th or 6th time of winning). Not bad for a veteran.

Sheila had made a curry for 6 people, a tradition of ours at this race. So after a quick wash and brush up, the meal was cooked at the side of the tent, our friends came over and it was demolished along with a few bottles of wine and a pack of lager. Prior to an evening of blues music and chat at the Newfield Inn.
Not sure what time we went to bed!!! But the nice thing was, the MIDGES were not in plague numbers and i didn’t get one bite this year. We camped at the back of the pub and so we didn’t have the walk back to Turner Hall that we have done so many times before.

A brilliant weekend.
Thanks to everyone for making such an effort. It was well worth it and a pleasure to be a part of it.

A slideshow of the day can be found here
Posted by AlanR at 8:59 AM

It was a fantastic day and night. Can't believe it's another year to the next one. Great time had by all and well done to all the marshalls for giving up your time and keeping all the runners safe.