After a delightful few days at Cable Bay we fixed the puncture in Manuka's right front and set off for the Able Tasman National Park.
We had been talking to some locals who suggested that Kaiteriteri would be a good place to start although it would be busy. Not as busy as England though we were humourously informed.
The road through the landslips posed no problems and then we were on the highway to Nelson and then through some beautiful vineyard country.
The approach to our destination was a very steep ascent and descent for a motorhome with some very sharp bends and dodgy cambers.
Then we came to Kaiteriteri, OMG, it was like Ibiza on steroids. We found the massive motorhome site and was told that all 400 powered sites were full. Finding out that there was another site a few miles further on we were relieved to say the least.
Another twitchy road into Marahau but what a delightful place. Camp sorted and a boat trip booked it was time for a laugh and a beer, maybe not in that order and then bed time.

Marahau
I wanted to spend some time in this area as it was missed on our first trip to New Zealand 14yrs ago.
The Abel Tasman National Park is the smallest of the parks here, but the most popular. Probably due to the kind climate. It was opened in 1942 which is 300 years after it's Dutch namesake first visited the area.
He didn't have it all his own way though. When he stopped to take on water his crew was attacked by Maori and a small number on each side were killed. He actually called Golden Bay as it's known today, "Murderers Bay".

Well it's hardly the most challenging and in some ways a little disappointing and over hyped walk you can do here but it is beautiful and well set up for visitors. It is only 54.4km long but can be extended to include the walk into Golden Bay and more. Maybe do the Heaphy Track as well.
All the main streams are bridged but there are a couple of tidal inlets which need to be crossed a couple of hours either side of low tide.
Generally speaking the walk can be completed in around 3 days but if you are in no hurry then take more and enjoy the surroundings.
It can be walked starting from either end but huts and campsites have to be prebooked. There are 8 huts and numerous camp sites. Water is abundant but filtering or boiling is recommended.
Only lightweight equipment is required for this one. Sandals and cossy optional!

Note, at the time of writing the Golden Bay end, around Tarakohe some roads are cut off due to landslips. According to the locals it is going to take an awful long time before it has full road access again. All access at the moment is by sea. (Check local info for updates.)

This walk consists of 2 main things, high forested headlands and wonderful white sandy beaches. Due to the frequency of use, the path is wide and clear.

We did a 17km day walk starting at Marahau. The good thing about this walk is that you can walk as far as you want to and then be picked up by water taxi from numerous bays and be returned to the start. So you don't have to carry more than a day sack if thats the way you would like to complete it.  Don't overstretch the time though as the taxi's won't wait too long after the pre arranged arrival times. Check up at the taxi offices prior to starting. 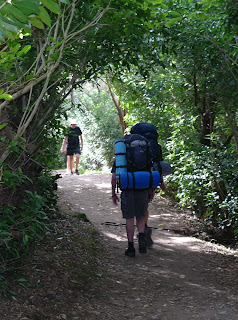 One of the many big loads people still carry. 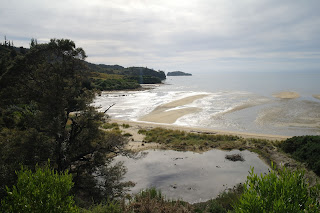 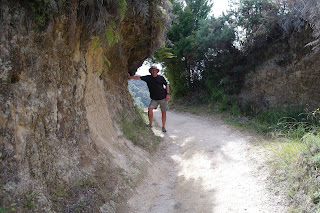 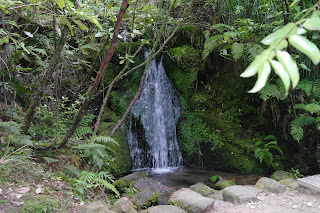 One of the many waterfalls 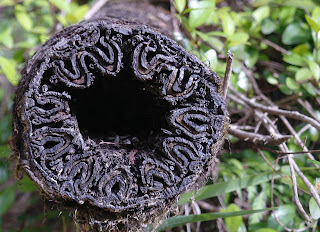 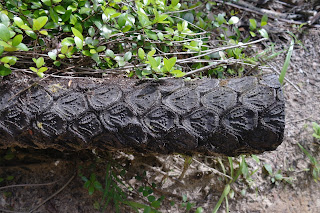 I havn't managed to find the name of the above tree yet. 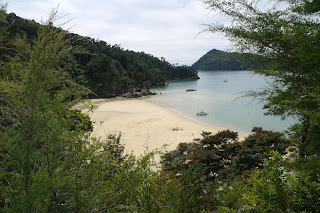 One of the many beaches along the route 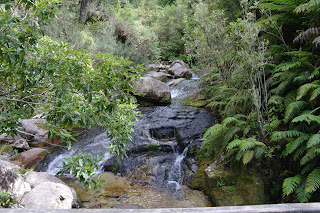 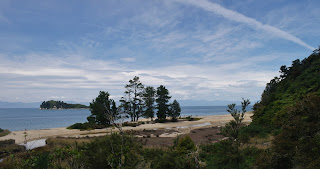 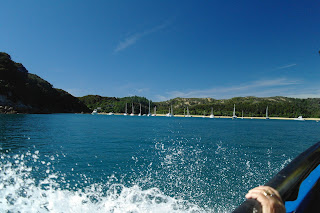 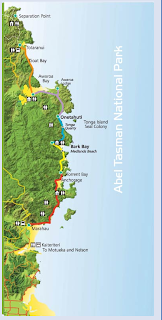