The sun shone strong today and blue skies dominated. All the negativity of the last few days was shelved and our planned walk was started at around 10.00am.
We had been told the track could be quite muddy and slippery especially with all the rain we had been having and also the track deviates from the map due to some new civil works being carried out.

The track starts in the suburbs of Whangarei alongside some beautiful tall palm trees.
A short distance down the track we met a chap who was looking for a safe place to release about a dozen ducklings and their mother. They had strayed from the safety of the river and into town where they could have been on the menu for cats. 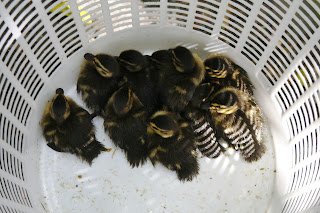 The track riverside is maintained by the local council and they do a good job. Many of the trees, some absolutely huge are all named for info.. Ferns abound, some i recognise from our local garden centre and cost a fortune, but here they grow wild and free. 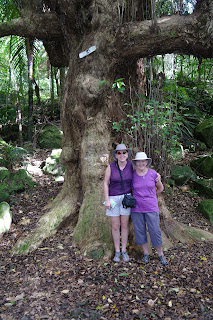 The path turned out to be quite dry and although we stopped often to take photo's we made good progress. 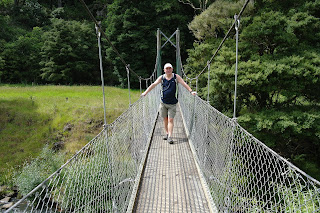 It's quite a popular walk and also there are a couple of access points where people with cars can get into the area, so you are never that far away from civilisation. But because of the dense forestry and steep banking it feels very peacefull.
It was warming up nicely, probably very high 20 deg C. so having the forest canopy kept us cool but once out into open land it was quite draining and we took a number of stops wherever we could. 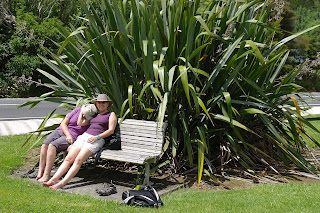 The flora and fauna was beautiful all the way, although there wasn't much wildlife about apart from the birds which we mainly could hear but not see. Then we were visited by a cheeky New Zealand Fantail, that stayed with us for a short distance. 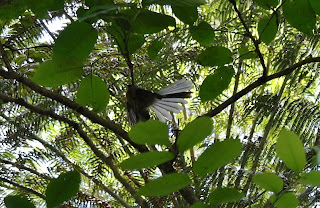 Long before we came to the falls the noise could be heard but we didn't expect the beauty which came before us. There was a bridge ideally positioned to get some good photo's and many people were taking the opportunity. I had to wait a while until i got a clear shot.

There is a circular path that goes right or left up and around the falls which leads to some viewing platforms at the top.

The return journey follows more or less the same route as going. We covered about 10 miles and it took us  about 4 hours. It could be done much quicker or it can be extended to include other trails.
All of it was stunning and i would post more pictures but the band width is narrow and so loading pictures takes an age.
I will post more at a later date.
Posted by AlanR at 8:19 AM