Sorry folks for the lack of postings over the last week but the Hotspots have been few and far between. Even using Sheila's phone as a hotspot has not been too successful. We have bought a Vodafone dongle and this has helped some. Downloading text is ok but as soon as pictures are being loaded it cuts off.
Anyway we are now in Ruby Bay and we have a good signal so i have been able to post this walk.
This is a lovely day walk, quite steep too when the temperature is high. We set off at 8.30am and it was 21 degreesC.
We thought it would be a doddle but it proved harder than we thought. Time wise for the whole trip is 6 - 7 hours with a lunch stop and obviously photographs.
We didn't do the descent into Glenduan as we had no way to get back. We stayed high and returned pretty much the same route as we came. 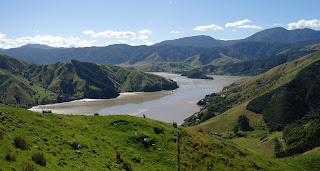 View on the way up to the first top.
The view of Cable inlet and Pappin Island just got better and better as we gained height and once at the top the seascape and views across the Tasman Sea were stunning. We checked to see if we could spot Whales or Dolphins but no luck. 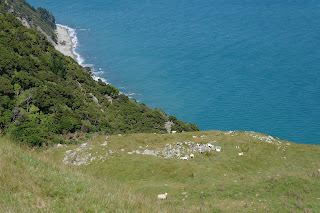 The ridge ahead was quite a whale back so with some contempt we made our first slight descent to a good track. Ahead we could make out some bovine characters that had Sheila crossing her fingers that they were actually off track. It didn't work. 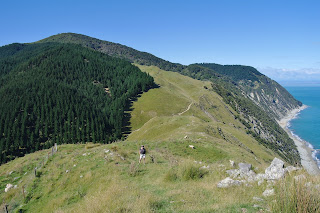 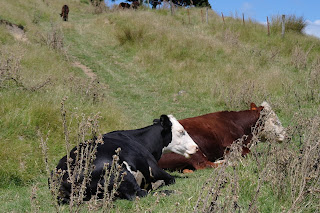 The big fellow with his Mrs of the moment.
It was getting quite hot and we were glad that we were getting closer to the bush. Quite a large area of natural bush. We slowed down to listen to the birds and the sounds of the Cicada inscects. 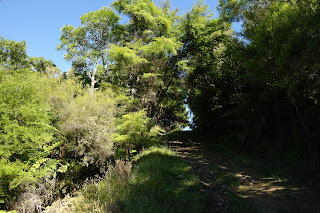 It was delightful walking for about 1/2 hour before coming to the planted forestry where silence took over. The sounds in the natural are amazing. But one photo in the bush is the same as another so i have done a short video so that you can hear the sounds.
It took 55mins to upload this vid so you can tell how bad the signal is. So i hope you think it's worthwhile.
Coming through the bush area, more wonderful views across to Abel Tasman could be seen. 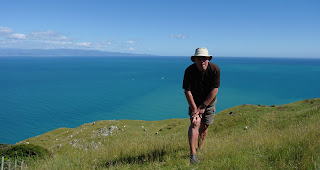 We stopped for lunch and before long we had company. 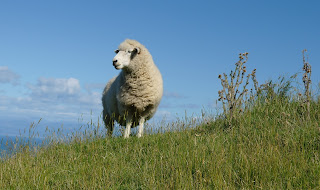 She must have liked the smell of our cheese and onion butties.

The return leg took a bit of a detour. The track split at a NO THROUGHFARE sign but we didn't fancy the steep incline again so we chose the naughty route.
We guessed by it's direction that we would come out at Cable Bay farm buildings and as we were staying there we thought we might not get into any bother.
This proved correct.
Just before taking the naughty route we were passed by 2 fellrunners. They must have been fit if they do this route on a regular basis.We just sat down and watched them go by. 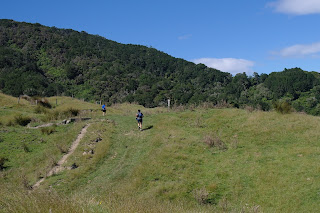 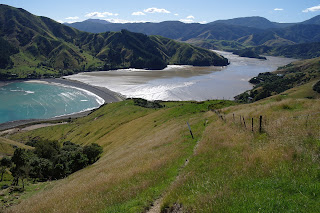 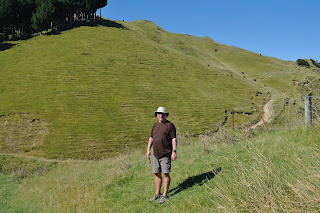 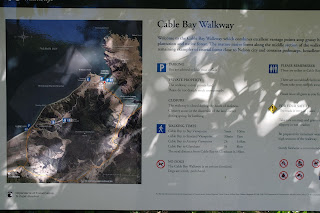 Well the perseverance has finally paid off and i can end this post. More to follow.
Posted by AlanR at 11:05 PM